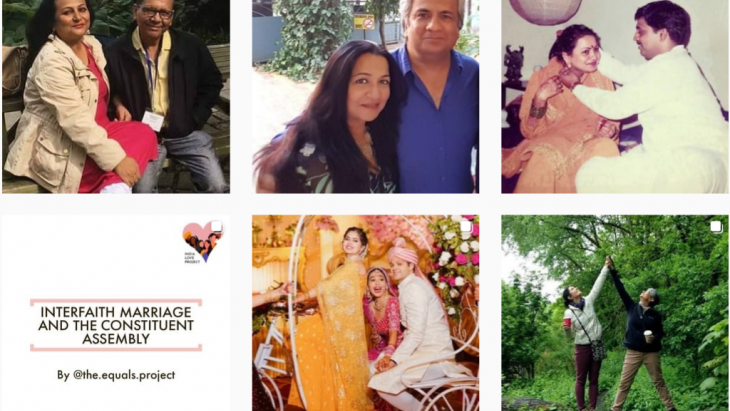 The "India Love Project" on Instagram
Fighting hate with love

Marrying for love is still quite a rare thing in India. Religion often gets in the way, as do caste and parental opinions. After the defamatory term "Love Jihad" started trending on Twitter, three journalists set up the "India Love Project" on Instagram to share stories of love that have transcended boundaries and discrimination of all kinds. By David Pfeifer

"Love is blind" is a phrase often used when Cupid's arrow hits two people who aren't an obvious match. And this blindness can really complicate things when Cupid fires his arrows in India.

Arranged marriages are still the norm in India. In fact, more than 90% of weddings there are apparently the result of such a match. Such unions are simply called "marriages", while the other kind, the extraordinary kind, are known as "love marriages".

When married Indian couples are asked about it, more than a few of them say how happy they are with the result of these planned unions. Before such marriages, the couples' relatives generally look at everything from a potential partner's educational background to his or her temperament, hobbies and horoscope. Alternatively, an algorithm calculates the best match based on this data.

As the number of relationships formed using dating websites steadily increases, we in Germany should be under no illusion that we are exercising completely free will when it comes to love. But in India, real problems can arise when two people choose their spouses themselves.

Weddings between members of two different castes are still a rarity, making up around five per cent of all marriages, while couples from two different faiths make up just a little over two per cent.

When the young Lata married her beloved Brahma, for instance, it was without the consent of either of their families. And when Lata's brothers found out, they went to the police, accusing Brahma of kidnapping. Lata and Brahma come from different castes, but they have now been married 20 years, very happily, as she writes – something the two of them have been rediscovering during the coronavirus pandemic in particular, while spending months stuck indoors together.

Zamrooda and Rajnish, on the other hand, had to wait years before being allowed to celebrate their Muslim–Hindu wedding, after a law called the "Special Marriage Act" was passed. Raul, too, who comes from a well-to-do Hindu middle class family, married the Buddhist Subhadra against his parents' wishes; they were worried that the poor farm girl would ruin the family's reputation. 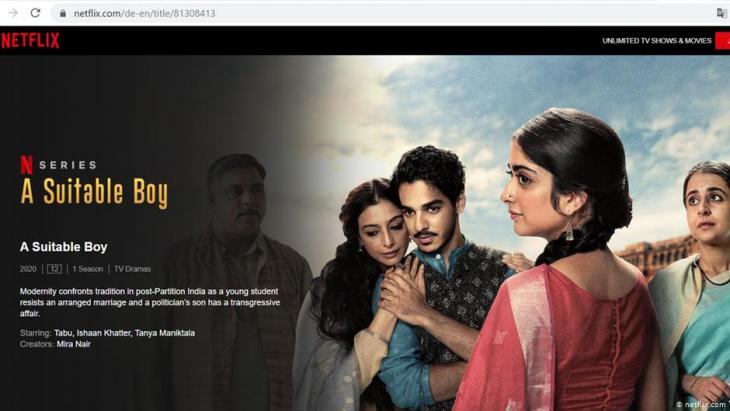 The Islamophobic "Love Jihad" conspiracy theory has been spreading in India and beyond since 2009. It alleges that Muslim men feign love for Hindu women in order to lure them into converting to Islam with the promise of marriage, thereby spreading Islam. This goes some way to explaining the outrage caused by the Netflix series "A suitable boy", which included a scene where a young Hindu woman kisses a Muslim man in a Hindu temple

All these stories and more are available to read about on the "indialoveproject" Instagram account, which was set up at the end of October. There, couples tell the stories of how they met; most have been together for many years. The relationships documented here are the ones that worked out, the stories with happy endings.

But the initiative has a thoroughly unhappy background. Muslims in India, for example, find it very difficult to convince Hindu families to give their blessing to an inter-faith marriage. There is frequent talk of a "Love Jihad", as if Muslim men were ensnaring Hindu women, taking the holy war into the marriage bed in order to spread Islam throughout India. The difficult situation that Indian Muslims currently find themselves in is often linked to the "Hindu nationalism" being stoked by the ruling Bharatiya Janata Party (BJP).

Just recently, a controversy was triggered by the Netflix series A Suitable Boy. It features a scene in which a young Hindu woman kisses a Muslim man in a Hindu temple. People immediately took to Twitter, calling on others to "#BoycottNetflix"; politicians also waded in. Narottam Mishra, a leading member of the BJP and minister of the interior for the huge federal state of Madhya Pradesh, told CNN: "This has extremely objectionable content which hurts the sentiments of people of a particular religion." He has asked the police to take action against the series being broadcast.

India Love Project, a social media initiative, is telling everyday love stories of people around us to combat terms like “love jihad” and “rice bag converts” that have come to stand in for the narrative of hate swirling around the country. pic.twitter.com/xnorIdKkcd

The attitude of many educated Indians, particularly in the major cities, is becoming more liberal in these matters. Nevertheless, two months ago an advertisement for the Tanishq jewellers featuring a Hindu mother at a baby shower organised by her Muslim parents-in-law was pulled. Tanishq, which is owned by the Tata corporation, which produces everything from steel to tea, was intending to use the campaign to promote its new collection. But Tata quickly caved in when the social-media storm broke.

After the defamatory term "Love Jihad" started trending on Twitter, three journalists set up the "India Love Project". Ever since, a new story has been posted every day, illustrated with photos of happy couples. Some of the photos have a distinctly Polaroid feel; others are black and white.

But it isn't just Hindus and Muslims who frequently have a hard time tying the knot; families often object to marriages between people of different castes or levels of wealth.

One of the first posts in the account tells the story of Sandip and Bishan, an author and a publisher who met online. Sandip was still working in San Francisco, while Bishan was in Calcutta. It was years before they managed to live in the same time-zone. "While they might not march in #Pride Parades, our families have made their peace with who we are," writes Sandip. Homosexual acts were only decriminalised in India in 2018.

So far, the "India Love Project" only has 24,000 followers, but that will change rapidly now that many Indian newspapers and news websites have reported on it. The idea is both beautiful and convincing: combatting the hate attracted by marriages across the boundaries of religion, caste and gender with what really matters: love.

COP27 in Sharm el-Sheikh is turning into a PR disaster for Egypt’s military regime. Instead of praise for the host, the news is full of solidarity for imprisoned activist Alaa ... END_OF_DOCUMENT_TOKEN_TO_BE_REPLACED

India is projected to see an explosion in its urban population in the coming decades, but its cities already cannot cope and climate change will make living conditions harsher ... END_OF_DOCUMENT_TOKEN_TO_BE_REPLACED

Indian Americans from diverse faith backgrounds have peacefully co-existed stateside for several decades. But events in the U.S. – and violent confrontations between some Hindus ... END_OF_DOCUMENT_TOKEN_TO_BE_REPLACED

Following the recent brutal attack on Salman Rushdie, famous writers have been reading passages from his works. Torsten Landsberg takes a look at the struggle in 1988 to publish " ... END_OF_DOCUMENT_TOKEN_TO_BE_REPLACED

The Biden administration could have used Pakistan’s economic crisis to compel the country to sever its longstanding ties to terrorist groups. Instead, the U.S. protects and ... END_OF_DOCUMENT_TOKEN_TO_BE_REPLACED

For some in India, the death of Queen Elizabeth II has provoked sympathies for a deeply respected figure, while for a few others, it jogged memories of a bloody history under the ... END_OF_DOCUMENT_TOKEN_TO_BE_REPLACED
Author:
David Pfeifer
Date:
Mail:
Send via mail

END_OF_DOCUMENT_TOKEN_TO_BE_REPLACED
Social media
and networks
Subscribe to our
newsletter