The murderous terrorist attack in Mumbai at the end of November brought the religious and political fault-lines on the Indian subcontinent sharply back into the public eye. Their background, however, reaches back to the days of British colonial rule, as the historian Jörg Fisch shows

Indian Special Task Force soldiers patrol outside a Hindu temple in Bhopal, India. Religious tensions in India have a colonial source, according to Jörg Fisch from Zurich University

​​From the eighth century on, India experienced repeated attacks by Muslim conquerors from the Northwest. The Mogul Empire formed the peak of this development, covering a larger territory at times between the sixteenth and eighteenth century than the British later ruled.

In the wake of the Muslim conquest followed a slow and regionally varied level of conversion to Islam, the large majority of the population remaining Hindu. Politically, in contrast, Islamic states dominated on the subcontinent, although many areas remained under Hindu rule for long periods.

A parallelogram of forces

The constellation was fundamentally changed when the British came into play from the second half of the eighteenth century – the third party contending for power. This type of competition generally tends to form an alliance with a minority within the country in order to subjugate the state with local aid. The Europeans – and not just they – used this method a number of times with great success in the course of their colonial history.

Indian Muslims in Kolkata (formerly Calcutta) during prayer time. With some 130 million Muslims, India is currently the third-largest Muslim nation

​​Yet the Islamic rule over India was a hegemony of the Muslim minority over the Hindu majority, and the British interest lay in joining forces with the inferior and subjected party. They therefore supported an emerging mainly Hindu leadership class, which had previously been excluded from the ranks of power.

This meant a twofold shift in India's balance of power. The competitors exchanged places, but at the same time the successful new Hindu-dominated leadership realised that although they might have outstripped their old rivals, the new conquerors had installed themselves at the top. The British were far more consistent in excluding Indians from influential positions, be they Hindus or Muslims, than the Muslims had ever done with the Hindus. 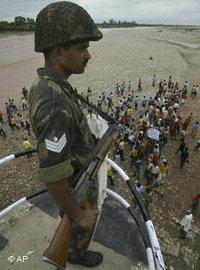 Kashmir, bone of contention: an Indian Army soldier stands guard as Hindus protest against the Jammu and Kashmir government for revoking a land transfer to a Hindu shrine

​​The result was far from reconciliation between Hindus and Muslims; their conflicts were too deep-seated for that. The Hindus, however, did gain sufficient confidence to build the world's strongest anti-colonial independence movement from the late nineteenth century on – the Indian National Congress. They had no need to exclude the Muslims from the movement, as they would have played a subordinate role either way.

The consequence was that the Hindu majority turned more strongly against British rule than the Muslim minority. Simultaneously, the latter was offered new opportunities. The British had to deal with a growing Hindu-dominated opposition. In this situation, the Muslims were the ideal allies, at least as long as they were prepared to tolerate their subordinate role.

To what extent the measures taken by the British in the first half of the twentieth century, initially hesitantly and later with increasing determination, were ultimately only a cynical application of the classic principle of "divide and conquer", and to what extent there was no other option for the colonial rulers if they were to avoid a bloody civil war, remains controversial. There is no denying, however, that the British treated the two religious groups differently. 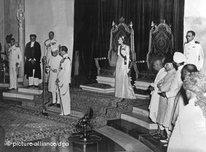 Transfer of Power on 15 August 1947: at midnight India became an independent nation. Violent clashes between Hindus, Muslims (and Sikhs) followed

​​The most important measure, after the Muslims had founded their own organisation in 1906 – the Muslim League – was probably the introduction of separate election constituencies. As a result, Hindus could only vote for Hindus and Muslims only for Muslims – inevitably intensifying their polarisation.

When it ultimately became clear that the British would not be able to maintain their rule in India in the long term despite Muslim support, and that only the call for independence found support in the population, the Muslims faced a dilemma. If they supported the British, they would have to face revenge on the part of the Hindus in the event of defeat. If they joined forces with the Hindus, they were sure to end up in a subordinate position – a permanent loss of power compared with the pre-colonial period.

The path of least resistance

As a last resort, one politically and religiously radical element of the Muslims eventually called for a partition of the country. They hoped to concentrate the vast majority of the Muslims in one area, achieving their goal in 1947 with the foundation of Pakistan. The British played along, because it was the path of least resistance. 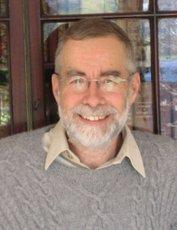 Historic layers: According to Jörg Fisch, much of today's ethnic discord can be traced back to British colonial tuning

​​Yet the costs were high. Previously, the religious conflicts in India had been mainly internal; compromises had almost always been possible. After partition, two rival states faced one another, separated along religious lines.

As no clearly recognisable geographical dividing line or even border zone had formed between the religions in the course of Indian history, partition occasioned countless acts of violence, costing hundreds of thousands of lives and making millions of people refugees. The partition itself failed in Kashmir, the object of conflict between the two states almost from the outset. India and Pakistan have now waged four wars over the issue, almost inevitably projecting their differences into Central Asia.

Partition caused a further difference between India and Pakistan. Following destruction, flight and expulsion on both sides, Pakistan had finally gained a Muslim majority – at the price of a division into two halves separated by India.

The only possible goal in this situation was an Islamic state, particularly in West Pakistan, which had a prouder and longer Islamic tradition than East Pakistan. The latter split from the western part of the country with Indian support in 1971 to form Bangladesh. India, in contrast, which has a hundred and fifty million Muslims of its own (almost fifteen percent of the population and roughly the same number as Bangladesh or Pakistan) can only regard itself as a secular state.

The situation is asymmetrical, both in terms of India's material superiority, which has repeatedly been cause for Pakistani humiliation, and in terms of the so far successfully maintained secular status that guarantees India a head-start on the international level.

Hence, the conflict between India and Pakistan has a great deal to do with religion. But not only and not primarily with today's political Islam and its Hindu nationalist opponents, but with the long history of discord on the Indian subcontinent.

Jörg Fisch is Chair of Modern History at the University of Zurich.

END_OF_DOCUMENT_TOKEN_TO_BE_REPLACED
Social media
and networks
Subscribe to our
newsletter