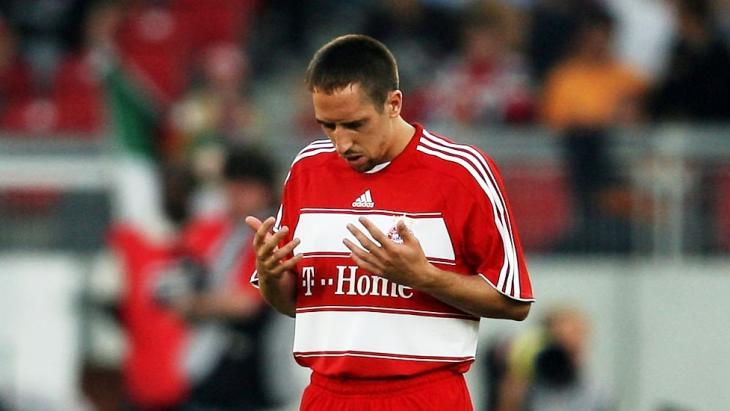 The Integrative Power of Football
Those who score, get to pray to Allah

It appears as if Islam is always perceived only as a threat. Yet, when soccer players pray to Allah, it is a popularly acclaimed declaration of faith. Nonetheless, the football pitch still has a long way to go to becoming a multicultural paradise, says Claus Leggewie

​​Germany's football fans cheer on a "good times" Muslim, writes the German magazine "Focus". It is a rare occasion when people here discover that Islam can also display a joyous face. The fear of Islam is most probably part of the basic Teutonic profile, whereby even the better situated and educated middle class is unsurpassed in its hysteria. And good times are exactly what Franck Ribéry, an exceptional football midfielder with Bayern Munich, offers fans with his goals, dribbles, and stepovers, as well as his practical jokes at training camp and on television, like when he knocks down a goal post. Ribéry has been a Muslim since he converted to the faith of his Algerian wife.

Before every game, just as the "born again" Lucio turns to his Christian God and the Catholic Silesian Miroslav Klose bows down to the God of the Poles, Franck, alias Bilal, prays to Allah. He is said to only drink mineral water off the pitch. And his homepage is emblazoned with the motto "always believe in God."

When Ribéry prays to Allah

What is accepted when it comes to Ribéry? The "Bild" newspaper engaged in a sort of inter-religious dialogue with the Bayern star. - "Your Muslim name is Bilal. What does it stand for?" - "I'll have to check with my wife on that. (Ribéry grabs his mobile phone, speaks for a moment, and hangs up.) It means 'the first one called to prayer during the time of the Prophet.'" - "Do you also pray in the changing room?" - "No, I pray properly at home. Or at the hotel before games. Then I can follow it with a small prayer on the pitch." - "And what about Ramadan? Do you fast?" - "That is difficult for a professional football player. Things used to be easier. Today, I have to more flexible when I play or train. In such situations, I simply can't afford not to take fluids.

Now, in September, this is how I plan to do things – I'll fast on my days off and break the fast when I play." The interview was conducted in September 2007. Yet, the fact that Ribéry is a (as one sees, a somewhat slipshod) Muslim, is hardly a topic of conversation in the stands. There is a rumour making the rounds on the football blogs that he is a Turk or was forced to convert to Islam. Does he beat his wife, force his daughters to wear a burka, or finance Koran schools? Such accusations may be usual for the imam around the corner, but not for a football god who can send fans into a state of ecstasy. If he wanted, he could even demand a prayer room in the Allianz Arena.

Islam is a part of football in Germany

Why is it that the foreign faith is all right for the football star, but arouses suspicion in the case of other Muslims? First of all, this must have something to do with the potential for veneration that football stars, whatever their faith, seem to foster, and also with the exceptional character of professional football, which tends to suspend many rules and overcome any typical opposition. Secondly, and perhaps most importantly, is that Bilal provides star performance on the pitch. As long as the play stays in top form, multicultural team sports are tolerated even in a racist society, and then it is only of secondary importance that multicultural is equally multi-religious – whether it's the tricolour of the French team or Energie Cottbus. Secular priorities are the decisive factor here. Whoever scores goals, passes, and blocks, is also allowed to pray.

There is also a third factor contributing to practical polytheism in the sports stadium. A rule of consensus that is adhered to regardless the competitive nature of the game of football, is that an opponent may be hit, but not seriously injured. As fairness is at issue, "foreigner teams" such as Türkiyemspor Berlin and FC Kosova serve as one of the most important means of contact with the majority society. They can play with everyone else, yet still remain among themselves. On the pitch, this ambivalence is somehow smoothed over and resolved.

The football pitch is no multicultural paradise

The threshold to discrimination is only crossed by "fans" that are openly racist or who couldn't care less about the game. They transform the antagonistic violence inherent in football, which, for the most part, has been tamed, into an unimpeded fury of destruction that can even prove dangerous for a "good times" Muslim. Furthermore, no football pitch is a multicultural paradise. Racist insults and xenophobia are par for the course – on the pitch as well as in the stands. Nonetheless, Ribéry's religious understatement in the successful Bayern Munich team has shown how even interreligious conflicts can be kept cooled down. Muslims are not aliens and Islam is a part of football (and a great deal more!) in Germany. It would certainly be wonderful if Ribéry's fans could show the same kind of tolerance when meeting those of different faiths in their daily lives or when seeing a minaret or veil. Ambivalences have to be managed here, too.

Claus Leggewie, born in 1950, is a sociologist and political scientist. He is the director of the Institute for Advanced Study in the Humanities in Essen and studies religious conflicts in Western societies.

The book "The Invention of the Maghreb: between Africa and the Middle East" prompts us to review basic terminology. This includes terms that we use almost every day as if they are ... END_OF_DOCUMENT_TOKEN_TO_BE_REPLACED

Asmaa al-Atawna's debut novel "Missing Picture" has been published in German translation (Keine Luft zum Atmen – Mein Weg in die Freiheit). In it, she describes life in Gaza from ... END_OF_DOCUMENT_TOKEN_TO_BE_REPLACED

Lebanon was long viewed as the Switzerland of the Middle East. Until relatively recently, billions were deposited in its banks. Gulf states were among the foremost investors in ... END_OF_DOCUMENT_TOKEN_TO_BE_REPLACED

To celebrate the bicentenary of the deciphering of the Rosetta Stone, the British Museum is running an exhibition entitled "Hieroglyphs: unlocking ancient Egypt" until February ... END_OF_DOCUMENT_TOKEN_TO_BE_REPLACED

Since Russia invaded Ukraine, Europe has been trying to find alternatives to Russian gas, inevitably zeroing in on the Arab Gulf states. In his commentary, Yemeni politician ... END_OF_DOCUMENT_TOKEN_TO_BE_REPLACED

Nouara may be 65, but she is ready to join thousands of others who burn their ID and pay traffickers for the chance of a new life in Europe. Zineb Bettayeb reports END_OF_DOCUMENT_TOKEN_TO_BE_REPLACED
Author:
Claus Leggewie
Date:
Mail:
Send via mail

END_OF_DOCUMENT_TOKEN_TO_BE_REPLACED
Social media
and networks
Subscribe to our
newsletter