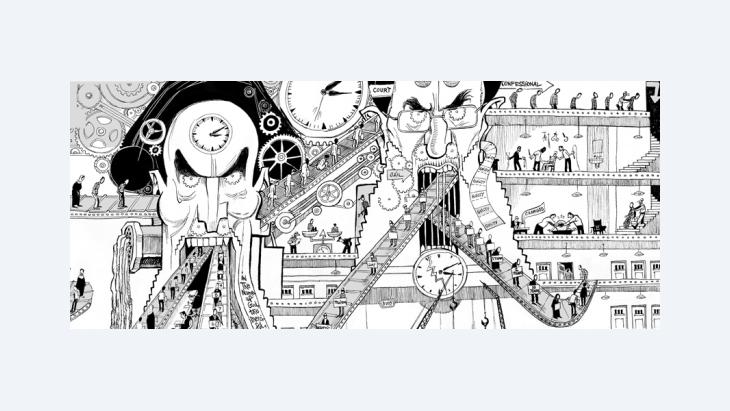 ﻿More than two years after the Green Movement's protests, a graphic novel has captured the political and social state of the Islamic Republic in graphic images. The book's anonymous authors, Amir and Khalil, portray Iran as a sinister country full of darkness and contradictions. Marian Brehmer read the book

Zahra's Paradise, written and illustrated by the anonymous duo Amir and Khalil, is set in the days after the protests against the elections in Iran in the summer of 2009. This graphic novel, which was first serialized on the Internet, begins with a bizarre opening scene: a small boy, somewhere in the mountains of Iran, is feeding a litter of puppies who are being suckled by their mother. The boy gives the puppies the names of the figures in Ferdowsi's Shahnameh, the great Persian national epic and the epitome of Persian culture.

Just at that moment, he hears the call to prayer from the mosque on the mountain. He immediately runs home, to be greeted by the stern face of his waiting father. His father takes a spade, leaves the house and digs a grave.

He then puts the puppies and their mother into a sack and thrashes the sack incessantly with the spade until the blood flows out onto the ground. He then throws the sack with the "impure creatures" into a river. A box at the edge of the panel reads "A lost generation". The sack briefly floats on the surface of the river before sinking to the bottom.

The reader is then left to contemplate the symbolism of these images before being thrust straight into the plot of Zahra's Paradise on the very next page. The story begins with a desperate mother who is searching for her son Mehdi just a few days after the presidential election in June 2009.

Mehdi has been missing since the protests on Azadi Square in the west of Tehran. It is Mehdi's younger brother, Hassan, who is now relating Mehdi's story in a blog entitled "Zahra's Paradise".

Crash course in the history and politics of Iran 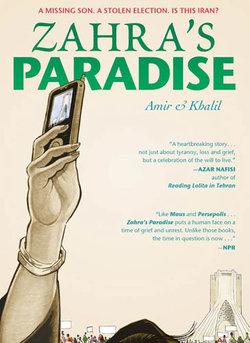 A reappraisal of the crackdown on the Green Movement in Iran in the summer of 2009: "Zahra's Paradise" by Amir and Khalil

​​The graphic novel relates what happened in those June days of 2009 when people, spurred on by the drive for freedom, called out "Allahu Akbar" from the roofs of their houses in the middle of the night; when accident and emergency departments of hospitals were filled with demonstrators who had been beaten up; when desperate parents stood outside the gates of the notorious Evin prison searching for their sons and daughters.

On a double page, Amir and Khalil show a major demonstration, including faithful reproductions of Mousavi placards and "Where is my vote?" banners. They describe this demonstration as a massive current that could have swept away everything in its path.

Those who are not familiar with the history and politics of the Islamic Republic of Iran get a crash course in both in Zahra's Paradise. The book is certainly not without its stereotypes and graphically and effectively traces the contours of the different fronts. The Basijis, for example, (i.e. the members of the paramilitary militia of the Islamic Revolution Guards Corps) are portrayed as sinister, coarse men while the mullahs are portrayed as scarecrows.

Head of State Khamenei has the hooked nose of an eagle and is surrounded by a posse of politicians, a group of lackeys who huddle close to the supreme leader and are constantly at each other's throats. Amir and Khalil do not shy away from showing executions and a rape in prison.

Their Iran is a very bleak place. When asked about this aspect in an interview with the German radio station Deutschlandfunk, Khalil said: "I conducted a lot of research for my drawings and it was as if I had visited these places and seen the people involved. That was tough. I really had to think about it all and turn the images in my head into images on paper. Sometimes, I wasn't able to sleep or eat for days."

The omnipresence of death

The Mullahs as Scarecrows: In "Zahra's Paradise", Amir and Khalil attack a system that "has been mired in profound contradictions regarding the ideological interpretation of 'Islam' and 'Republic' ever since its foundation"

​​There are also, however, sensitive, tragicomic scenes in the book that play with the quirks of the Iranian mentality. Take, for example, the good-natured taxi-driver who weaves his way through the traffic like only a taxi-driver from Tehran can, while frankly complaining about the contradictions in contemporary Iran.

"Everything in this city is named after death!" he shouts, pointing out the streets that have been named after the martyrs of the Iran-Iraq War. Everything in the Islamic Republic is supposed to be Islamic, he says. When the taxi passes a begging child, he cynically asks what is so Islamic about that. The taxi then passes cranes from which the lifeless bodies of executed men are hanging. "Christians have the cross; we have the crane," is written in a bubble at the edge of the panel.

Elsewhere in the book, Hassan and Mehdi's cigar-smoking uncle comments on the role played by foreign surveillance technology in the Iranian spying system: "You are like flies trapped in an invisible spider's web. Siemens, Nokia, or whatever they are called. Or do you really believe that Iranians are in charge of the Iranian secret service?"

All roads lead to the cemetery 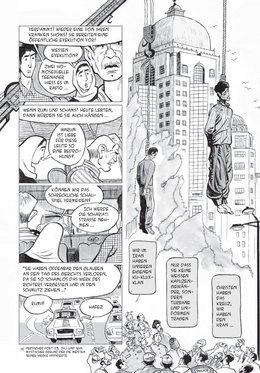 "Christians have the cross; we have the crane": a scene from the Iranian graphic novel by Amir and Khalil

​​The Ayatollah Zaheer is also an interesting figure; a polite and kindly old man with a black turban, who resembles the former Iranian president, Mohammed Khatami. Is this a coincidence? Although Zaheer promises Mehdi's mother that he will help; he is later revealed to be a marionette of the system and forbids the family to tell anyone about the fate suffered by its son.

Like many of the real young people who protested in 2009, the fate of the fictitious Mehdi is not a happy one. All roads ultimately lead to Behesht-e-Zahra ("Zahra's Paradise"), the massive cemetery on the outskirts of Tehran that is named after the daughter of the Prophet Muhammad.

There are over one million graves in Behesht-e-Zahra. Some of them are filled with the remains of those who were killed in the protests. They are the puppies that the small boy at the start of the novel named after the great, classical heroes in the national epic. But according to Amir and Khalil, it is not only the young generation that is at risk, so too is the old Persian cultural heritage, which in Zahra's Paradise stands for an Iran that has lost its way.

Mehdi is not only the protagonist of this graphic novel, but also the name of the "Hidden Imam" and the Messiah of the Twelver Shia who is expected to return to save the world. The fact that a Mehdi has to die in the Islamic Republic is an intentionally chosen metaphor: the guardians of the religious revolution set up a regime in God's name; a regime that oppresses its people instead of showing the path to religious redemption.

In their artistically composed symbiosis of words and images, Amir and Khalil denounce a system that has been mired in profound contradictions regarding the ideological interpretation of "Islam" and "Republic" ever since its foundation.

Zahra's Paradise by Amir and Khalil was published in English by First Second in September 2011.

Short movies nominated for an Oscar often don't get wide public attention. But when one is about an Iranian girl seeking freedom from male domination by taking off her veil, ... END_OF_DOCUMENT_TOKEN_TO_BE_REPLACED

World-famous Iranian film director Jafar Panahi has been incarcerated for several months, even though Iran's Supreme Court overturned the verdict against him. Now, he has gone on ... END_OF_DOCUMENT_TOKEN_TO_BE_REPLACED

Young women are driving forward the protests against the Iranian regime, which have been going on for months. Literature provides clues as to why that should be, and why the ... END_OF_DOCUMENT_TOKEN_TO_BE_REPLACED

Visiting the country of her parents, murdered by the Iranian regime in 1998, German-Iranian artist Parastou Forouhar finds a changed society: hopeful, strong and courageous, ... END_OF_DOCUMENT_TOKEN_TO_BE_REPLACED

Ballet performances are prohibited in Iran. In her film "1001 Nights Apart", director Sarvnaz Alambeigi documents the history of dance in the Islamic Republic. By Fahimeh Farsaie END_OF_DOCUMENT_TOKEN_TO_BE_REPLACED

END_OF_DOCUMENT_TOKEN_TO_BE_REPLACED
Social media
and networks
Subscribe to our
newsletter