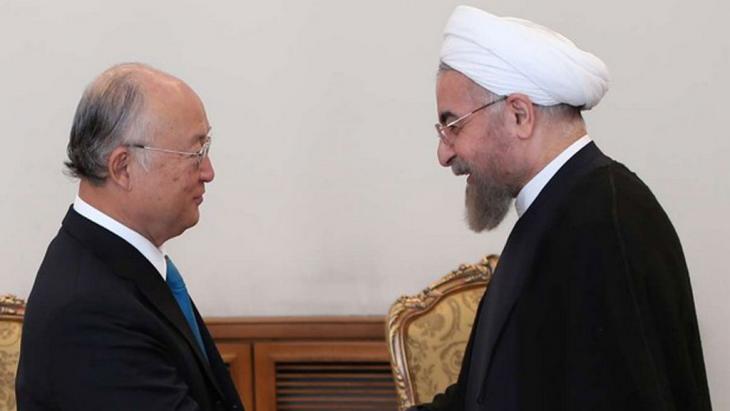 One year into his tenure, Iran's President Hassan Rouhani has entered the first precarious phase of his presidency. The challenges at home are becoming more urgent, his political adversaries more outspoken and the setbacks more frequent and severe. The turf war within Iran's political establishment is intensifying. By Adnan Tabatabai

In order to assess current developments appropriately, it is necessary to identify the three most relevant policy fields in which President Hassan Rouhani has to deliver most urgently, outline the criticism he is facing in those fields and make sense of the logic behind the opposition to Rouhani's policies at home and abroad.

Rouhani promised to take immediate action to improve Iran's dire economic situation, open up the social and political space and resolve Iran's nuclear file, with the latter aiming explicitly at "breaking the sanctions regime", as he has repeatedly put it.

As far as the economy is concerned, Rouhani's government has been able to achieve some undeniable progress. Inflation has been halved from 40 per cent to around 20 per cent, the value of Iran's national currency significantly strengthened and prices of basic goods and food stabilised. Car production and petro-chemical production have increased remarkably. There has also been an influx of tourists.

In order to fill the most acute budget gaps, energy prices were increased by 30 per cent and petrol prices by an astonishing 75 per cent. Interestingly enough, however, there was no considerable public outcry or political attacks.

Nevertheless, Iran's journey to meaningful economic growth will be a long one. Rouhani's team will have to prove capable of successfully tackling the numerous remaining challenges, for example, he will need to stabilise the economy to attract foreign direct investment. According to the International Monetary Fund, however, Rouhani's administration is on track. 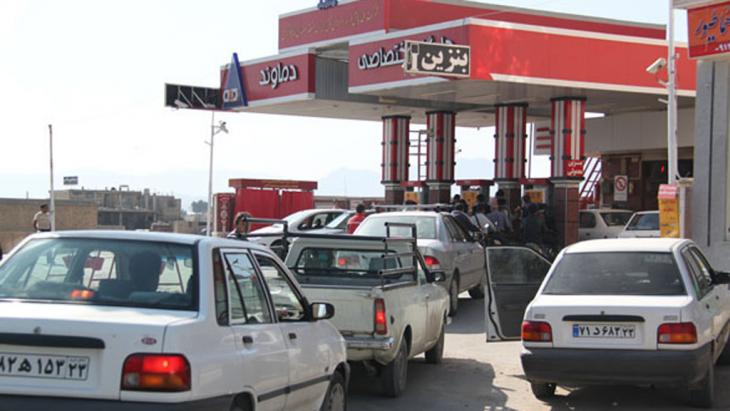 In order to raise some urgently needed revenue, energy prices in Iran have been increased by 30 per cent and petrol prices by 75 per cent. "Interestingly enough, however" writes Adnan Tabatabai, "there was no considerable public outcry or political attacks"

One step forward, two steps back

The Rouhani administration's policies of de-securitising academia, media, culture and public life are facing growing resistance in influential conservative circles of the establishment. There is progress, but there are setbacks too. One could say that it is a case of "one step forward, two steps back".

Conservatives are intensifying their attacks. Minister of Science Reza Faraji-Dana is facing impeachment in parliament. Among other things, he is criticised for bringing back students and lecturers who were expelled from university for their political views and activities.

Similarly, Minister of Culture and Islamic Guidance Ali Jannati has come under repeated attack for speaking out in favour of less regulation in the media and cultural spheres. Jannati is in favour of lifting the ban on Facebook and other social media networks. But even as the son of Ayatollah Ahmad Jannati, head of the powerful Guardian Council, Jannati Junior has not been capable of bringing about any substantial changes so far.

While the variety of public debates in the media has widened, the continued arrest of journalists and bans on media outlets show that the struggle over public discourse is not over. The judiciary, which is led by Sadegh Larijani, who has just been approved for another 5-year term, clearly has the upper hand. It adopts measures beyond the government's control. Keeping his campaign promises is, therefore, particularly difficult for Rouhani in this context. It is important to note, however, that the steadfast resistance of conservative circles are proof that Rouhani's government is, at least, trying.

The Joint Plan of Action (JPA) on which Iran and the P5+1 (the member states of the UN Security Council plus Germany) agreed on 24 November 2013, was a major breakthrough. Iranian and American senior officials have met for direct bilateral talks on numerous occasions, with the latest meeting taking place in Geneva on 7 August. Direct contact between the foreign ministers of the two countries is no longer a taboo.

But the time for reaching a comprehensive agreement is slowly running out. On 18 July, Iran and the P5+1 decided to extend the deadline for an agreement by four months until 24 November. Nevertheless, substantial gaps remain. While Iran insists on addressing the concerns of the P5+1 by ensuring full transparency, the P5+1 expect a considerable reduction in the capacity of Iran's nuclear programme. Political will alone will not be enough to resolve the many technical details involved.

Interestingly, and in sharp contrast to the hitherto fully respected agreement to maintain confidentiality, both Iranian and US officials went public with important details about their positions. Such posturing certainly further complicated the negotiations as it considerably reduced each side's room to manoeuvre. This time, it seemed, negotiators from Tehran and Washington felt the need to address their constituencies and critics at home. In both countries, a resolute and persistent group of people is trying everything to prevent a final nuclear agreement being reached. 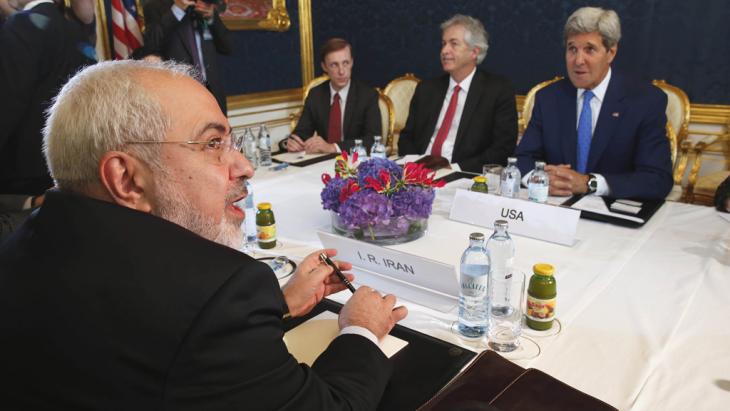 Iranian Foreign Minister Javad Zarif holds a bilateral meeting with US Secretary of State John Kerry in Vienna, Austria, on 14 July 2014. According to Adnan Tabatabai, direct contact between the foreign ministers of the two countries is no longer a taboo

It should come as no surprise that after 35 years of open hostility towards each other, sceptical voices remain and speak up whenever cautious steps towards rapprochement are taken. Both the Rouhani and Obama administrations will have to tame these critical voices. Otherwise, any agreement reached may not be ratified at home.

The recent wave of criticism and resistance towards his policies has apparently left its mark on Rouhani. He seemed on edge during a meeting with Iran's ambassadors in Tehran last Monday and lashed out at those who continuously question and criticise the ongoing nuclear negotiations.

"Some who are politically timid and cowardly do not have confidence. (...) Whenever negotiations start, they say that they are shaking – To hell, go and find a warm place for yourself," the president said in remarkable fury.

His unprecedented attacks sparked controversy. The following day, the ultra-conservative daily "Kayhan", known for its inflammatory pieces against moderates and reformists, launched a rebuttal on its front page which read: "Rouhani unveiled his discourse of moderation by inviting his critics to go to hell!"

And, indeed, this kind of rhetoric and the heated dispute that comes with it have little to do with the overall conciliatory approach Rouhani had introduced. Experts and observers are still discussing whether or not the president's outburst was tactically sound. Could it be that it is sometimes necessary to lash out at critics in this way in a political context such as that of the Islamic Republic? 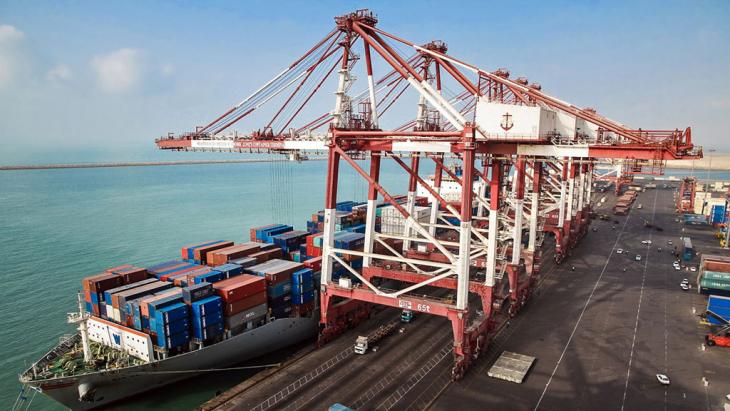 On the right track: trade with Iran has increased since the easing of sanctions against the Islamic Republic. Pictured here: a container ship after arrival at an Iranian port. Although the IMF has said that the Iranian government is moving in the right direction and progress has been made, Adnan Tabatabai says that "Iran's journey to meaningful economic growth will be a long one". In other areas too, he says, progress is being made, but it is a case of taking one step forward and two steps back

It is important to distinguish between criticism that must be addressed through serious engagement, and criticism that may have to be dismissed rather than dealt with. Criticism that arises out of factual investigations must, obviously, be answered using factual responses. If concerns over economic policies are voiced, Rouhani's cabinet must address them. If there are concerns about the technical details of the nuclear negotiations, critics all have every right to expect detailed responses. It goes without saying that certain facts are stressed while others are rejected for party political reasons. However, the power of the fact-based argument should prevail, and empty rhetoric should be easy to expose and reject as such.

Criticism that arises from ideological convictions, however, can be very difficult to deal with. Those who criticise Rouhani's attempts at liberalisation in the university, media, and cultural spheres are convinced of the state's moral responsibility to have a visible presence in those arenas.

These critics – mostly arch-conservative lawmakers, right-wing politicians and traditional clerics – are deeply anxious about potential dynamics from within and efforts from outside to undermine the system of values of the Islamic Republic and tend to associate the opening up of the socio-political realm with an invitation to dissident thought. In their view, relying on regulatory policies at home and on the notion of resistance in foreign affairs – particularly towards the West – is what most effectively secures the core values of the Islamic Republic.

While this school of thought suggests Iran is strong when relying on itself, the mindset of centrists like Rouhani is that Iran shows its strength through outreach. These viewpoints are obviously very hard to reconcile.

Does this give the president the right to discredit rivals as "cowards"? Certainly not! Iran has had enough confrontational rhetoric. But referring to the core issue of isolationist tendencies may, in the medium term, prove constructive for political discourse inside Iran.

The appropriate language for such a sensitive debate, however, has yet to be found.

Drought and upstream water diversions have seen the Zayandeh Rood, "fertile river" in Persian, run dry since 2000, with only rare exceptions. The famed river bridges of the ... END_OF_DOCUMENT_TOKEN_TO_BE_REPLACED

Very different Western reactions to the suffering in Ukraine and the Arab world show that there is a profound rift among cultures. Essay by Michael Young END_OF_DOCUMENT_TOKEN_TO_BE_REPLACED

Since the government cut subsidies for food, prices in Iran have skyrocketed. Protests that broke out in Khuzestan province are now spreading across the Islamic Republic. By ... END_OF_DOCUMENT_TOKEN_TO_BE_REPLACED

United Arab Emirates strongman Sheikh Mohammed bin Zayed al-Nahyan, who was formally elected president on 14 May, has led a realignment of the Middle East, creating a new anti- ... END_OF_DOCUMENT_TOKEN_TO_BE_REPLACED

More than 800 Iranian filmmakers have signed a declaration against sexual harassment, coercion and violence in their industry. The public's response to their willingness to name ... END_OF_DOCUMENT_TOKEN_TO_BE_REPLACED
Author:
Adnan Tabatabai
Date:
Mail:
Send via mail

END_OF_DOCUMENT_TOKEN_TO_BE_REPLACED
Social media
and networks
Subscribe to our
newsletter