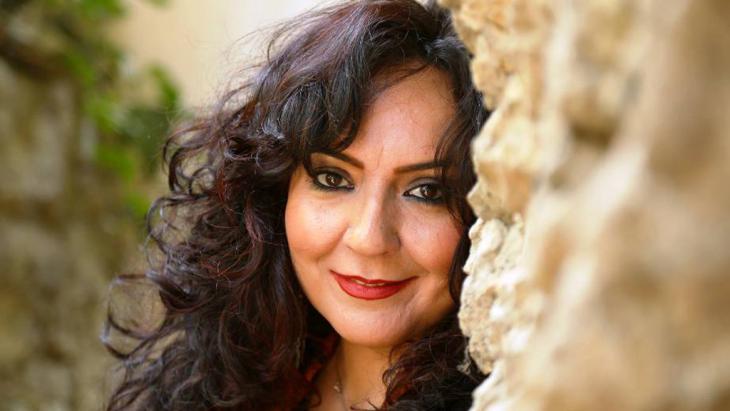 The Iranian singer Mahsa Vahdat
"Every place can be my stage"

Mahsa Vahdat is not only one of the finest woman singers in Iran, she has also dedicated herself to the preservation of the female voice in classical Iranian music. Marian Brehmer listened to her new album "Traces of an old vineyard"

Iranians love the aesthetic and the subtle. In order to undestand what this means, it suffices to watch a short video that was shot on Esfahan's famous Khaju Bridge last year. Night-time singing beneath the bridge's yellow-lit brick arches was a long tradition until it was banned a few years ago. Against this backdrop, the Iranian singer Mahsa Vahdat gives a spontaneous performance to a group of passers-by. With the crystal-clear voice that made her famous among lovers of Iranian classical music, she sings a ghazal by Hafez into the night. All the magic of Persian culture seems to be instilled into this one scene.

If Iranian women were not banned from performing solo since revolutionary leader Ayatollah Khomeini decreed so, Mahsa Vahdat would still be giving successful concerts across the country. Undoubtedly, Vahdat's singing is among the finest that contemporary Iranian classical music has to offer. She has many fans in Iran, in the Iranian diaspora and among lovers of world music.

For Mahsa Vahdat and her sister Marjan, who are musical companions, the inspiration to sing came from their grandmother. She used to sing traditional lullabies to the two sisters during their childhood, while her poetry-loving father kindled Mahsa's love of Persian poetry. At the age of 12, she started training in traditional Persian singing, which later led to a Bachelors degree in Music at Tehran University.

Rising above the obstacles

As a passionate singing instructor, Mahsa Vahdat today teaches Persian vocal arts to young women in her Tehran flat.  The preservation of the female element within the Iranian vocal tradition is a matter close to her heart. Despite all the restrictions women face, she has motivated many Iranian women to preserve classical Iranian singing for future generations.

Until now, Mahsa Vahdat has sung in a duet on all her albums: with her sister Marjan, she recorded the CDs "Songs from a Persian Garden" (2007), "I am Eve" (2008) and "Twinklings of Hope" (2012). Each of the two singers has her own specific timbre. The intimacy of the sisters is reflected in the effortlessly flowing songs on these albums.

Mahsa Vahdat also forged an unusual union with the American singer Mighty Sam McClain, which resulted in the albums "Scent of a Reunion" (2010) and "A deeper tone of longing" (2012). Possibly the first fusion of classical Iranian singing with the warm and vibrant blues sound of an Afro-American singer, their work was well-received by the World Music audience: "A deeper tone of longing" reached No. 6 in the European World Music Charts. 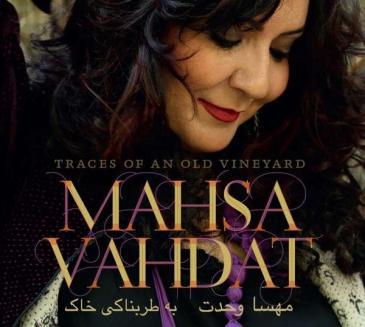 "Although her singing on 'Traces of an old vineyard' has unmistakably jazz-like traits, the Iranian element in her voice is never compromised," writes Marian Brehmer

Mahsa Vahdat's new album "Traces of an old vineyard", which was recorded in a church in Oslo, is her first truly solo record. All twelve tracks on the CD, distributed by the Norwegian record label "Kirkelig Kulturverksted", are based on Vahdat's own melodies. Her singing is accompanied by the Norwegian pianist Tord Gustavsen and by an Iranian percussionist and a kamanche player.

The songs that have evocative titles such as "Morning sun of hope" or "Kissing the wine jug" are actually poems by the Persian lyricists Hafez, Rumi and Omar Khayyam. These poems are printed in Persian and English in the beautifully designed booklet.

Fine harmony between piano and singing

The album opens with a poem by Hafez, in which Mahsa Vahdat sings about the yearning for love and unification with the Almighty. As if coming out of nowhere, her voice emerges from a piano intro, which gently anticipates the melodic contour of her singing. In all the songs, piano and voice are in beautiful harmony. While most of the songs are solemn and soft, the tombak sometimes brings in a rhythmic note.

As on her previous duet albums, Vahdat's voice has a mystical colour that fits the character of the poetry. Although her singing on "Traces of an old vineyard" has unmistakably jazz-like traits, the Iranian element in her voice is never compromised. By the same token, Vahdat remains faithful to the classical poets of her homeland. "These poems are old, but the way they address humanity is timeless. Their message is universal. The way they talk about truth and love is so liberating.  Whenever I read these poems, they refresh my soul and heart and I always find new dimensions and discover new layers in them", says Vahdat.

Although Mahsa Vahdat could give concerts in front of a woman-only audience in Tehran, she doesn't want to: "By doing so I would justify the discrimination imposed by the government." Still, thanks to the Internet and international productions, many Iranians have access to her music.

Many of her Iranian fans, says Vahdat, find it hard to believe that she still lives in Iran. "When they hear that I live in Iran and still sing here, they are amazed. Iran is my homeland and that's why I sing in Iran. Of course I dream of having access to a public stage in my country. But every place can be my stage." Just like the bridge in Esfahan.

Home
Print
Newsletter
More on this topic
Film review: "No Land's Song": One woman's quest to make Iranian women's voices heardIranian musician Shahram Nazeri: The Persian nightingale and the flowers of hopeMusic and power in Iran: An instrument of propaganda and controlMusicians in Iran: An uphill struggle all the wayInterview with the Iranian virtuoso Kayhan Kalhor: For the love of improvisation
Related Topics
Iranian music, Musical worlds, Women in the Islamic world
All Topics

Since the government cut subsidies for food, prices in Iran have skyrocketed. Protests that broke out in Khuzestan province are now spreading across the Islamic Republic. By ... END_OF_DOCUMENT_TOKEN_TO_BE_REPLACED

Very different Western reactions to the suffering in Ukraine and the Arab world show that there is a profound rift among cultures. Essay by Michael Young END_OF_DOCUMENT_TOKEN_TO_BE_REPLACED

United Arab Emirates strongman Sheikh Mohammed bin Zayed al-Nahyan, who was formally elected president on 14 May, has led a realignment of the Middle East, creating a new anti- ... END_OF_DOCUMENT_TOKEN_TO_BE_REPLACED

More than 800 Iranian filmmakers have signed a declaration against sexual harassment, coercion and violence in their industry. The public's response to their willingness to name ... END_OF_DOCUMENT_TOKEN_TO_BE_REPLACED

Russia's ranking on the World Press Freedom Index has fallen again over the Kremlin's wartime censorship of the Ukraine conflict. From Myanmar to Mexico, journalists continue to ... END_OF_DOCUMENT_TOKEN_TO_BE_REPLACED
Author:
Marian Brehmer
Date:
Mail:
Send via mail

END_OF_DOCUMENT_TOKEN_TO_BE_REPLACED
Social media
and networks
Subscribe to our
newsletter