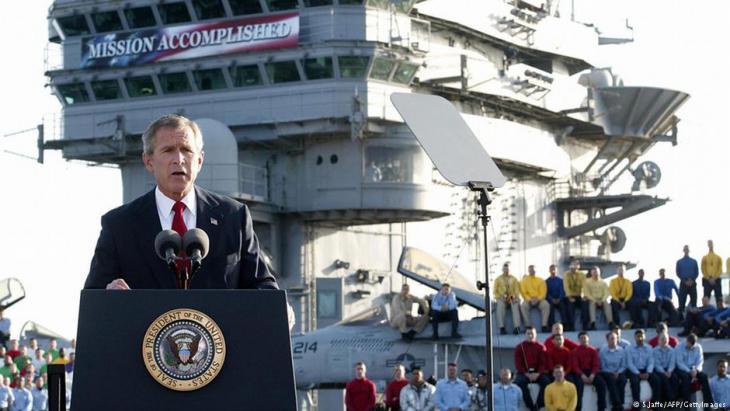 The Iraq War fifteen years on
"America destroyed my country"

Fifteen years ago, on 20 March 2003, the United States and its allies invaded Iraq. Iraqi novelist and poet Sinan Antoon describes the pain of watching his country disintegrate in the aftermath, made all the more acute since the perpetrators of this "colossal mistake" are still at large

When I was 12, Saddam Hussein, vice president of Iraq at the time, carried out a huge purge and officially usurped total power. At the time I was living in Baghdad and I developed an intuitive, visceral hatred of the dictator early on. That feeling only intensified and matured as I did.

In the late 1990s, I wrote my first novel, "Iʹjaam: An Iraqi Rhapsody", about daily life under Saddamʹs authoritarian regime. Furat, the narrator, was a young college student studying English literature at Baghdad University, as I had. He ends up in prison for cracking a joke about the dictator. Furat hallucinates and imagines Saddamʹs fall, just as I often did. I hoped I would witness that moment, whether in Iraq or from afar.

I left Iraq a few months after the 1991 Gulf War and went to graduate school in the United States, where Iʹve been ever since. In 2002, when the cheerleading for the Iraq war started, I was vehemently against the proposed invasion. The United States had consistently supported dictators in the Arab world and was not in the business of exporting democracy, irrespective of the Bush administrationʹs slogans.

"Freedom and democracy" for Iraq

I recalled sitting in my familyʹs living room with my aunt when I was a teenager, watching Iraqi television and seeing Donald Rumsfeld visiting Baghdad as an emissary from Ronald Reagan and shaking hands with Saddam. That memory made Mr. Rumsfeldʹs words in 2002 about freedom and democracy for Iraqis seem hollow. 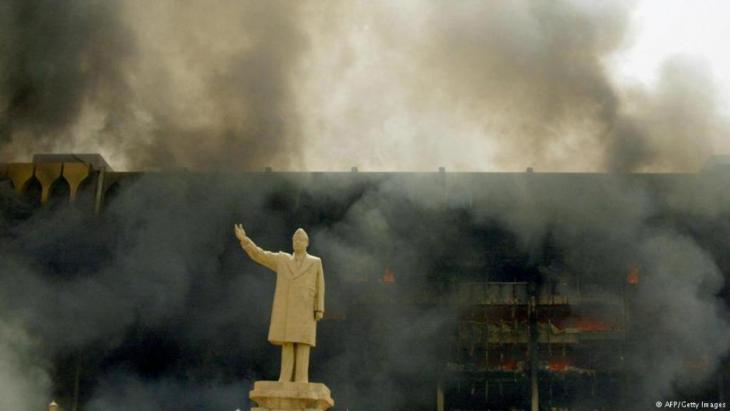 No to war on Iraq. No to dictatorship: "while condemning Saddamʹs reign of terror, about 500 Iraqis in the diaspora – of various ethnic and political backgrounds, many of whom were dissidents and victims of Saddamʹs regime – were against a ʹwar that would cause more death and sufferingʹ for innocent Iraqis, while threatening to plunge the entire region into violent chaos," writes Antoon

Moreover, having lived through two previous wars (the Iran-Iraq war of 1980 to 1988 and the Gulf War of 1991), I knew that the actual objectives of war were always camouflaged by well-designed lies that exploit collective fear and perpetuate national myths. I was one of about 500 Iraqis in the diaspora – of various ethnic and political backgrounds, many of whom were dissidents and victims of Saddamʹs regime – who signed a petition: "No to war on Iraq. No to dictatorship".

While condemning Saddamʹs reign of terror, we were against a "war that would cause more death and suffering" for innocent Iraqis and one that threatened to push the entire region into violent chaos. Our voices were not welcomed in mainstream media in the United States, which preferred the pro-war Iraqi-American who promised cheering crowds that would welcome invaders with "sweets and flowers". There were none.

The petition didnʹt make much of an impact. Fifteen years ago today, the invasion of Iraq began.

A French artist has used photos of torture from Abu Ghraib for an oversized artwork at the Berlin Biennale. Reactions from fellow artists have been mixed, with some criticising ... END_OF_DOCUMENT_TOKEN_TO_BE_REPLACED

Since Ali Khamenei, Iran's most powerful man, has openly and unconditionally come out in support of Putin's war in Ukraine, logistical help is on its way, with an allegedly ... END_OF_DOCUMENT_TOKEN_TO_BE_REPLACED

The Palestinian militant organisation Hamas, with Hezbollah's help, is building up a military presence in Lebanon, the ultimate consequences of which could be devastating, writes ... END_OF_DOCUMENT_TOKEN_TO_BE_REPLACED

In this essay, renowned Lebanese journalist and writer Hazem Saghieh asks whether the Arab Levant, which stretches from Iraq in the east to Egypt in the west, will remain an ... END_OF_DOCUMENT_TOKEN_TO_BE_REPLACED

Extreme drought in Iraq has given German and Kurdish archaeologists the unique chance to examine an ancient Bronze Age city that was hidden beneath the water of a reservoir for ... END_OF_DOCUMENT_TOKEN_TO_BE_REPLACED

With his fist bump greeting for a man he previously called a pariah, US President Biden has paved the way for Saudi Crown Prince Mohammed bin Salman's return to the international ... END_OF_DOCUMENT_TOKEN_TO_BE_REPLACED
Author:
Sinan Antoon
Date:
Mail:
Send via mail

END_OF_DOCUMENT_TOKEN_TO_BE_REPLACED
Social media
and networks
Subscribe to our
newsletter