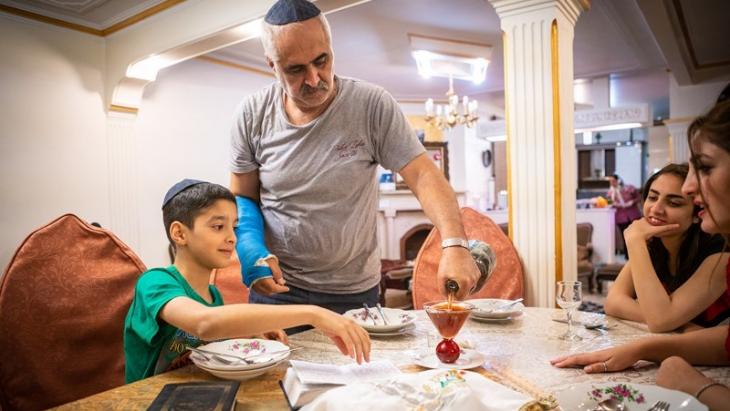 Iran is home to the largest Jewish community in the Muslim world. Jan Schneider visited the Jewish Musazadeh family in Tehran to share in their Sabbath celebrations

It is Friday evening and a Jewish family’s preparations for the Sabbath, the holiest day of the week, are in full swing. In the living room, everyone has gathered around the big table for the traditional celebration as tantalising aromas of hot food drift through from the kitchen.

The youngest son breaks the unsalted bread, then reads from the Tanakh as the father pours the obligatory glass of red wine to be passed around the table. Although it may look very like the kind of typical scene to be found in thousands of households across Israel every weekend, there is one important difference here. This one is happening in Iran.

The last rays of winter sunshine are just dipping out of sight behind the Alborz mountains on this cold January day in Tehran. It is the last day of the week, which in Iran begins on Saturday. There are no major buildings – and certainly none of a religious nature – to punctuate the skyline in this part of town with its plethora of small kiosks and supermarkets.

There is no doubt that things have changed since the revolution. Prior to 1979 there were ten times more Jews living in Iran than there are now. Despite the troubled relationship with Israel however, Iranian politicians and clergy are always at pains to stress that they have no quarrel with the Jews, only with the state of Israel. As Ayatollah Khomeini put it shortly after the revolution: “We recognise our Jews as separate from those godless Zionists”.

It is a quote that is still to be found today on every Jewish prayer house. Something that the Iranians, no matter which religion they belong to, have internalised. In contrast to the situation in German-speaking countries, Jewish institutions in Iran do not require any security arrangements. Iran has not seen a single attack on a Jewish building.

After several major waves of emigration, the number of Jews living in the country has now stabilised. According to Israeli statistics, only 1100 Jews migrated to Israel from Iran between 2002 and 2010. For those who remain, prospects are surprisingly positive. They have been granted official minority status, a permanent seat in parliament and freedom to practice their religion. They have their own butchers’ shops, their rabbis are permitted to conduct weddings, and the community can produce and drink its own wine for the Sabbath – and that, even though alcohol is otherwise subject to strict prohibition in Iran. 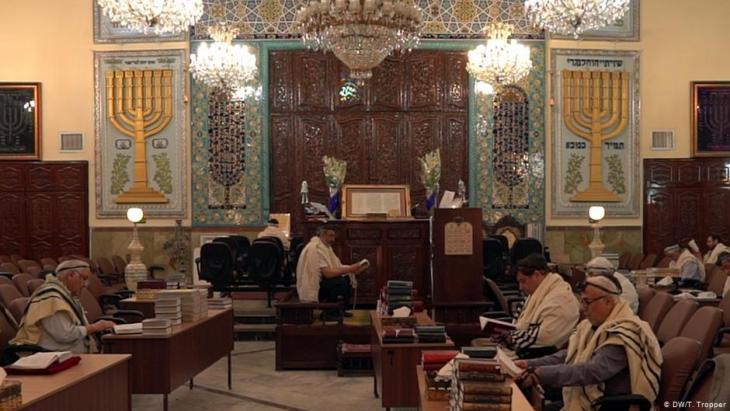 The Yusuf-Abad district is home to Iran's largest synagogue, which – as with all synagogues in Iran – cannot be recognised as such from the outside. And yet a resourceful visitor will know that he has come to the right place. Every Friday, always at sunset, parishioners stream into the synagogue. There is a lot of traffic on the streets, and parking spaces are always rare in the Iranian capital with its 12 million inhabitants

“We love Iran and we are able to live in freedom here,” says Eliyan, the Musazedeh family’s eldest daughter. The 24-year-old lives with her family near the centre of Tehran, the only Jewish family in the apartment block. “Our neighbours know we are Jews, but it isn’t an issue. The society here in general does not have problem with us being Jews.”

Although Jews in Iran are not allowed to hold leading positions in state institutions such as the army, police or secret service, their lives are otherwise as free of restrictions as that of other Iranians.

Young women are driving forward the protests against the Iranian regime, which have been going on for months. Literature provides clues as to why that should be, and why the ... END_OF_DOCUMENT_TOKEN_TO_BE_REPLACED

Visiting the country of her parents, murdered by the Iranian regime in 1998, German-Iranian artist Parastou Forouhar finds a changed society: hopeful, strong and courageous, ... END_OF_DOCUMENT_TOKEN_TO_BE_REPLACED

Iran's president Ebrahim Raisi is overseeing an unyielding crackdown. The current situation grimly echoes his role in a purge of political prisoners in 1988 END_OF_DOCUMENT_TOKEN_TO_BE_REPLACED

Ballet performances are prohibited in Iran. In her film "1001 Nights Apart", director Sarvnaz Alambeigi documents the history of dance in the Islamic Republic. By Fahimeh Farsaie END_OF_DOCUMENT_TOKEN_TO_BE_REPLACED

Chinese President Xi Jinping's visit to Saudi Arabia in December 2022 may have rattled Washington, but it simply highlighted the Arabs’ desire to diversify their foreign relations ... END_OF_DOCUMENT_TOKEN_TO_BE_REPLACED

There are signs of an imminent normalisation of relations between Turkey and Syria. This would allow Erdogan to score political points domestically before the upcoming elections ... END_OF_DOCUMENT_TOKEN_TO_BE_REPLACED
Author:
Jan Schneider
Date:
Mail:
Send via mail

END_OF_DOCUMENT_TOKEN_TO_BE_REPLACED
Social media
and networks
Subscribe to our
newsletter