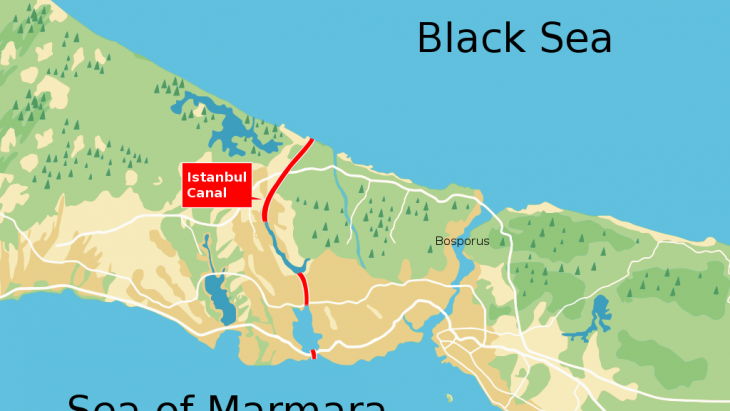 Turkey's President Erdogan wants to create a second Bosphorus. The cost to the economy and environment would be enormous – and that's why Istanbul's mayor is attempting to stop the plan. A bitter power struggle is raging. By Daniel Derya Bellut

Turkish President Recep Tayyip Erdogan is well known for his penchant for gigantic construction projects in Istanbul. Be it a new airport, Turkey's largest mosque or a tunnel that goes under the Bosporus – he has built it all within a short time. But these objects of prestige are nothing compared to his latest construction project: The Istanbul Canal.

The Turkish government is planning nothing short of the creation of a second Bosphorus – a copy of the strait that meanders through the middle of the 16-million metropolis of Istanbul. To the west of the city, the artificial 45-kilometre canal is to be built parallel to the Bosphorus, linking the Black Sea with the Sea of Marmara. According to government sources, the intention is to relieve the heavy shipping traffic on the Bosphorus and to avoid accidents.

Planning for the project began as early as 2011, then stagnated for years. But now the Turkish government has brought the plans to life again. Erdogan announced that tendering for construction of the canal will begin soon. The Ministry for Environment and Urban Development has examined the environmental compatibility of the construction project and assessed it as "positive".

But the realisation of Erdogan's latest mega-construction project is being hampered by a shift in the balance of power in the Bosphorus metropolis in June. Since then, Social Democrat Ekrem Imamoglu of CHP has been mayor — marking the first time in 25 years that Istanbul's mayor is not part of Erdogan's AKP party. And the city's newest leader has made his opposition to the planned construction known.

Imamoglu has called the project a "betrayal of Istanbul" and a "murderous project", vowing that "16 million people will resist." He has also taken political action by terminating a protocol of cooperation that the previous municipality had agreed with the government. 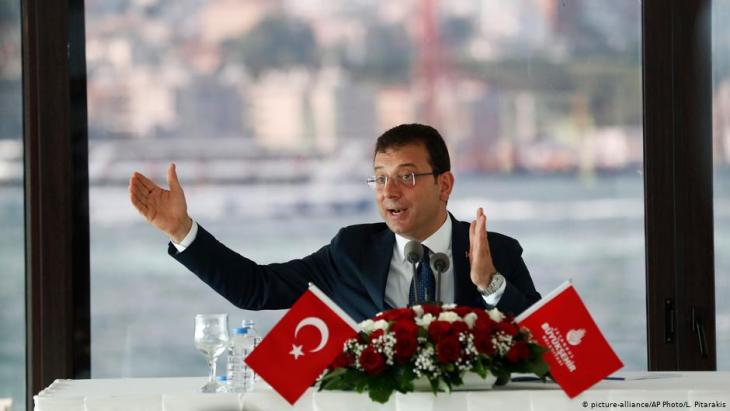 "A betrayal of Istanbul": the gigantic canal project in Istanbul has become a test of strength between Istanbul's opposition mayor Ekrem Imamoglu and President Recep Tayyip Erdogan. In a speech that was partly broadcast nationwide and lasted about one and a half hours, Imamoglu sharply condemned the project. "Why are we knowingly calling down disaster upon ourselves?" he asked

The rejection by Istanbul's mayor, but also of city residents and scientists, is mainly due to the high construction costs and considerable environmental concerns.

The project could have a significant impact on the region's nature, says environmental expert Doganay Tolunay of Istanbul University. The canal will consume important water resources because Istanbul's water reserves are stored where it is planned to run. The canal also endangers the region's complex ecosystem.

"The dune landscapes in the north of the city are home to protected forests, streams and pastures that are important for the ecosystem and are home to hundreds of species of plants and animals," warns Tolunay. A serious disturbance of the ecosystem is also likely to have economic consequences. "Fishermen in the Black Sea and farmers would have to leave the region," he said.

Added to this are the enormous construction expenses. Officially, a figure the equivalent of €11.5 billion is currently on the table. But experts expect the costs for the new canal to be much higher. The largest opposition party, CHP, has criticised the project as a "burden to be borne by taxpayers." 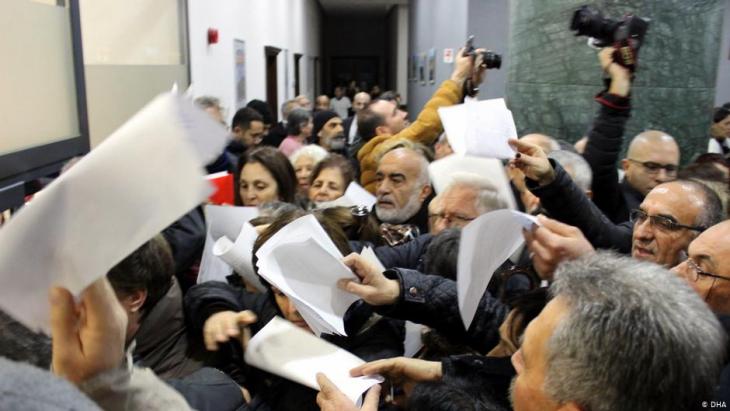 Concerned citizens – seen here submitting petitions in opposition to the Istanbul Canal project in Izmir at the end of December 2019. The canal is a flagship project for the Turkish president, who has a penchant for large construction projects. It would be dug as an artificial seaway across Istanbul to connect the Sea of Marmara and the Black Sea. According to reports, it would be about 45 kilometres long and run parallel to the Bosphorus, thus – according to the government – relieving the latter of some of its international shipping traffic

Critics warn that the canal could have a negative impact on the tectonic fault lines that run deep beneath Istanbul's soil, such as increasing the risk of earthquakes. The Agency for Disaster and Emergency Management, however, disagrees – saying there is no connection between earthquake risks and the construction of the canal.

But the statement has done little to convince many city dwellers. Their fear is highlighted by Imamoglu. He claims that a kind of island is being created between the canal and the Bosporus, with 8 million people "trapped" in an earthquake-prone area by this island location.

The mayor of Istanbul also criticises the fact that plots of land along the canal have already been sold to Arab investors, including members of royal families. Erdogan's response: "Is that forbidden? If it were Hans and George, nobody would have a problem with it."

'The canal will be built'

Leaders within Erdogan's AKP party repeatedly point out that the construction project is not in the remit of Mayor Imamoglu nor Istanbul's city administration, insisting that the Istanbul Canal is a national project – not a local one.

For years, Erdogan has described the project as his "dream" – and he shows no signs of relenting to sceptics. "Whether they like it or not, the Istanbul Canal will be built," says the Turkish president. "We will not allow people without a vision, who have no goals, no love and hope for our country, to dissuade us from doing so," he vows. "We will never engage with the opposition's malicious agenda because we don't want to waste a single second."

One year ago the Taliban returned to power, seizing Kabul; the U.S. and its allies made a panicked exit from the country. Of all the books written on the subject, four stand out ... END_OF_DOCUMENT_TOKEN_TO_BE_REPLACED

In "Iran. Die Freiheit ist weiblich", journalist Golineh Atai describes the dogged resistance of courageous Iranian women against the Islamic Republic and the mullahs who have ... END_OF_DOCUMENT_TOKEN_TO_BE_REPLACED

Unflattering terms were used at a German Football Association human rights congress aimed at "intensifying the discussion" ahead of the World Cup. One speaker in particular made ... END_OF_DOCUMENT_TOKEN_TO_BE_REPLACED

Egyptian authorities have Mada Masr in their sights once again after critical reporting. But the editor of the country's last independent news source is adamant they will continue ... END_OF_DOCUMENT_TOKEN_TO_BE_REPLACED

Like Christianity, Europe's history is one of migration. Both have strong roots in the Orient and in cultures thousands of years old. Cultural historian Bernhard Braun invites us ... END_OF_DOCUMENT_TOKEN_TO_BE_REPLACED
Author:
Daniel Derya Bellut
Date:
Mail:
Send via mail

END_OF_DOCUMENT_TOKEN_TO_BE_REPLACED
Social media
and networks
Subscribe to our
newsletter