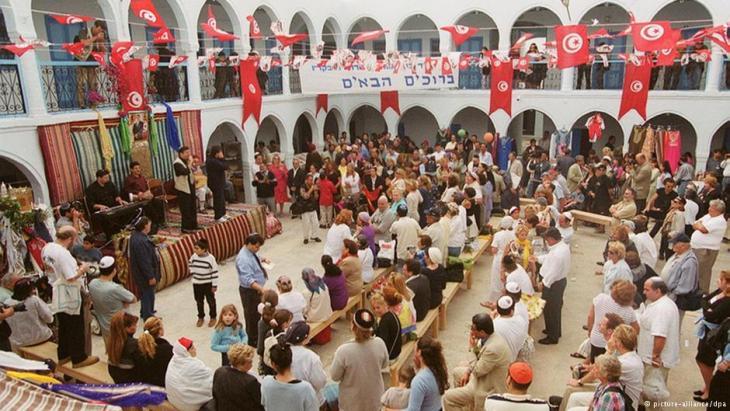 The Jewish community in Tunisia
"Everything is ok; we don't have any problems"

Once numbering over one hundred thousand, Tunisia's Jewish community has dwindled over the years. Its members practice discretion, but certainly have no desire to hide. By Sarah Mersch in Tunisia

"Well, I don't exactly walk down the street wearing a yarmulke; I wear a baseball cap instead, but it's the same story in the Paris Metro," laughs Moshé. That, he says, is the only concession he makes. The 25-year-old finance expert is one of the most active members of the Jewish community of Tunis. Around one-third of Tunisia's approximately 1,500 to 2,000 Jews live here. In 1948, there were more than 50 times that number. Today, most live on the island of Djerba, and the others mainly in the coastal towns of Zarzis, Sfax, Sousse and Tunis.

No matter whom one asks in the community, they never tire of repeating that the Tunisian Jews are doing well. "Everything is ok; we don't have any problems" is the stock phrase used by Perez Trabelsi when asked how things are. The leader of the Jewish community in Djerba has just successfully completed the annual pilgrimage to El Ghriba, the oldest surviving synagogue on the African continent. The journey was without incident, despite the fierce discussions that preceded it, especially regarding Israeli nationals entering Tunisia.

"More than 200 came along, like every year," adds Trabelsi. At the beginning of the year, an earlier trip to Israel taken by the minister of tourism, together with a ban on Israeli cruise ship tourists entering the country, triggered vehement public debates in Tunisia. 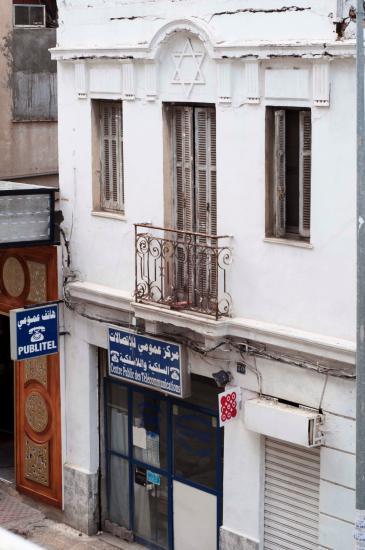 An unused synagogue in Tunis: the history of the Jews in Tunisia stretches back over two thousand years. Today, only about 1,500 Jews remain in the country

Moshé is tired of all these discussions. "Relations with Israel are a difficult topic of course, and like elsewhere, there is always this mixing-up of Jews and Israelis." People often ask him about it.

"Everyone has their opinion on Israel and Palestine, all over the world. Sometimes I don't feel like talking about it anymore. When I go out, I just want to enjoy a beer in peace," he laughs. Emigrating to Israel was never an option for him.

Most of the Tunisian Jews now living in Israel left Tunisia long ago. Some also left the country right after the political upheavals of January 2011, fearing the growing Islamism in Tunisia. But the vast majority remained, and in the meantime the size of the community has stabilised.

"Every now and again, people – especially young people – go abroad to study and start a career. It's the same for all other young Tunisians," says Moshé. He himself studied abroad and didn't come back until 2012. "I think that today, after the revolution, there are more opportunities for young people in our country and we should take advantage of them."

"Safety is the main thing"

Apart from a demonstration by Islamist extremists, there were for a long time no further incidents after 2011. However, there have already been three episodes since the start of this year – more than there used to be in a whole year.

"They may have just been simple disputes between two Tunisians," says Moshé. But he doesn't really sound all that convinced. "If someone was attacked because he is Jewish, then the judiciary naturally has to do its work. If you're Jewish, safety is the main thing."

While the Great Synagogue of Tunis, a magnificent Art Deco building, is recognisable as such from afar, most Jewish institutions in Tunisia can be identified only by their round-the-clock police protection.

"Since I was little, there have always been police officers stationed outside the synagogue, only the barbed wire was new," recalls Moshé, and immediately adds that he still feels safe. The barbed wire was recently removed, but the barriers and the police officers remain. The people in the Jewish community don't like to talk about problems, and they mostly steer well clear of political debates about Islamists and anti-Semitism.

There were no Salafists when Jewish shops in Tunisia were attacked during the Six-Day War in 1967, notes Moshé. He is still cautious, though, and doesn't want his surname to appear in the media, or his photo. 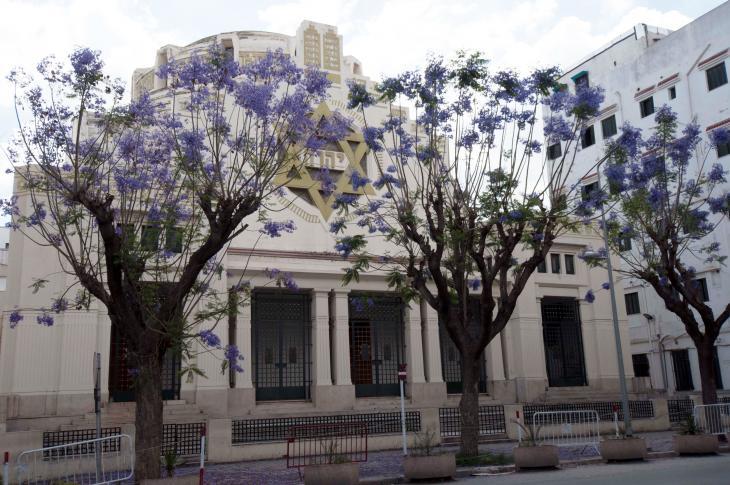 A synagogue in Tunis: after the Arab Spring, some members of the Tunisian Jewish community left the country, fearful of the rise in Islamism. Although the situation has remained relatively quiet since the revolution of 2011, synagogues still have police protection

Discretion is the order of day

The motto of many would appear to be "Don't be too conspicuous, don't make any demands." Only one Jew ran as a candidate in the elections for the Constitutional Assembly in 2011. He was not elected. The constitution that was then adopted in 2014 stipulates that the president must be Muslim. "There is nothing wrong with that; we have no interest in politics anyway," says Perez Trabelsi, playing down the issue.

Moshé takes a slightly more pragmatic view. As it is not likely that a Jew could ever become president, the constitution might as well prohibit it. "The result is the same." He nonetheless feels at home in Tunisia. "I have only ever supported the Tunisian football team, I have just one passport, a Tunisian one, and therefore I have exactly the same problems as all other Tunisians when I want to travel."

The young finance expert, who now works in real estate, takes out his smartphone and presents a map of Tunis. It shows the locations of former synagogues and the graves of famous rabbis. Most of these sites can no longer be seen today with the naked eye. There are only three synagogues left in Tunis, two in the colonial district of Lafayette, where there are still two kosher butchers, and one in the port district of La Goulette, where the Jewish retirement home is located.

In former days, the Jews in Tunis lived primarily in Hafsia, an Old Town quarter. Most of the other major cities also had a Jewish quarter. When the French colonised Tunisia in 1881, they gave the Jews more rights. Instead of "Tunisian", their passports said "French Protectee", regardless of whether they were of Arabic, French or Italian origin.

At that time, many settled in the European-style New Town. Today, however, many homes that once belonged to Jews are vacant; some of them nearly tumbling down, because their inhabitants have in many cases left the country and the ownership situation is unclear. "It hurts to see so much falling to ruin. But we just don't have the resources to preserve everything," says Moshé, a sad look on his face. Nevertheless, he refuses to stop searching for the heirs to these buildings.

For the future, he would like to see more political and economic stability – "just like all Tunisians", he says with a wink. But Moshé also has a very special wish: "that one day, no police officers will be stationed outside the synagogue."

Home
Print
Newsletter
More on this topic
Interview with M'Hammad Bennaboud: The Muslims and Jews of TétouanInterview with Benjamin Stora: The history of relations between Jews and MuslimsChristians in Tunisia: Cause for Concern
Related Topics
Arab Spring, Jews in the Islamic world, Minorities in the Muslim world, Tunisian Revolution
All Topics

Yazan Khalili is spokesman for The Question of Funding, a collective of artists taking part in the leading German contemporary art festival Documenta 15. Here, he responds to ... END_OF_DOCUMENT_TOKEN_TO_BE_REPLACED

When times are tough, the exchange of ideas and perspectives becomes especially important. It takes dialogue. And at Deutsche Welle, we need distributors and cooperative partners ... END_OF_DOCUMENT_TOKEN_TO_BE_REPLACED

Every week, Jewish, Christian and Muslim youths meet to sing together. And they do so in the middle of a city where Israelis and Palestinians are often at loggerheads. Anja Koch ... END_OF_DOCUMENT_TOKEN_TO_BE_REPLACED

A law has been passed by the Iraqi parliament that criminalises any contact with Israel. In the midst of heated debates on the subject, one crucial aspect has been forgotten: the ... END_OF_DOCUMENT_TOKEN_TO_BE_REPLACED

Analyst Iyad El-Baghdadi examines the ongoing tensions between the United States and the two Gulf states – Saudi Arabia and the UAE – and their geopolitical implications in ... END_OF_DOCUMENT_TOKEN_TO_BE_REPLACED

What do we mean when we talk about Palestinian literature: an exploration using the example of Adania Shibli’s slender novel "Minor Detail". By Miryam Schellbach END_OF_DOCUMENT_TOKEN_TO_BE_REPLACED
Author:
Sarah Mersch
Date:
Mail:
Send via mail

END_OF_DOCUMENT_TOKEN_TO_BE_REPLACED
Social media
and networks
Subscribe to our
newsletter