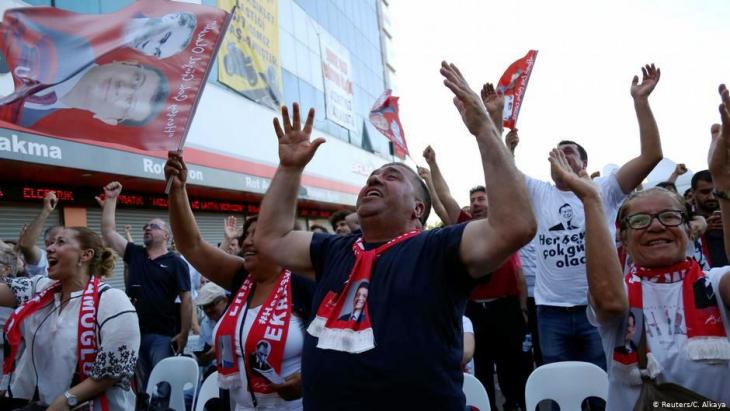 The Kemalist CHP and the Kurdish HDP

Will the CHP take Imamogluʹs success in the re-run of the Istanbul mayoral elections, achieved through the support of the HDP, as an opportunity to finally abandon its rigid attitude towards the Kurds? By Gulistan Gurbey

The Republican People’s Party (CHP) was able to win the mayoral election in Istanbul (31 March and 23 June 2019) and at the same time experienced how important co-operation with the Kurdish-progressive Peopleʹs Democratic Party (HDP) is to generate political strength.

It should be emphasised that the support of the HDP was decisive for the CHP's victory. Indeed, their support made CHP's victory possible in the first place: the HDP did not nominate its own candidates in major West Turkish cities in order to help CHP candidates win the elections. Moreover, the HDP party leadership called for CHP candidates to be elected. This ensured that Ekrem Imamoglu also received the votes of many Kurdish voters in Istanbul. Of the some 4.6 million votes that Imamoglu received, 911,000 were HDP votes.

The repeat of the mayoral election in Istanbul on 23 June 2019 was characterised by a fierce struggle for the Kurdish vote. Both the CHP and the ruling Party for Justice and Development (AKP) tried to win them over, paying particular attention to the non-voters (more than 1.5 million) and the Kurdish voters. The AKP did not focus its strategy on large-scale rallies, but aimed specifically to solicit these votes on the ground, e.g. through home visits.

In order to send a positive signal in the competition for Kurdish voters, the government abruptly lifted the eleven-year ban on visiting the lawyers of Abdullah Ocalan, leader of the banned Kurdistan Workers Party (PKK) and imprisoned since 1999, at the beginning of May. For the first time in eleven years, Ocalanʹs lawyers were able to visit the Kurdish detainee. 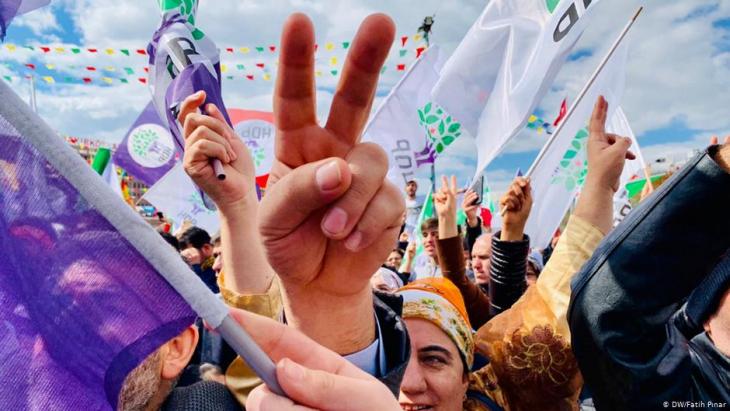 Victorious, thanks to the HDP: the support of the Kurdish-progressive Peopleʹs Democratic Party (HDP) was crucial to the CHPʹs recent victory. Desirous of not splitting the vote, the HDP not only decided not to nominate its own candidates in major West Turkish cities, it also called on its supporters in those areas without an HDP candidate to vote for the CHP. As a result, Ekrem Imamoglu received much of the Kurdish vote in Istanbul. Well over a fifth of the some 4.6 million who voted for Imamoglu were HDP

Shortly before the elections on 23 June, the AKP government once again played the "Kurdish card": a statement by Ocalan, in which he allegedly called on the Kurds to be neutral, was issued in order to influence the HDP voters. Nevertheless, the AKP still did not succeed in winning the election. The CHP candidate, Ekrem Imamoglu, emerged as the clear winner with a lead of around 9 percent (Imamoglu: 54 percent, Binali Yildirim: 45 percent).

The CHP's electoral success triggered an atmosphere of optimism within the party. At the same time, pressure on the CHP has increased because its success has also raised expectations among the population, and the HDP is now hoping for more support in the Kurdish cause.

The HDP: a key factor in the balance

The electoral success of the CHP also revealed the role of the HDP as a key factor in the balance: despite its status as a Kurdish-regional party, the HDP has become a vital component and can no longer be ignored. A legal political party and the third strongest opposition faction in the Turkish parliament, the HDP has suffered state repression for years, with the result that it has been significantly weakened and is hardly capable of acting independently.

Under President Recep Tayyip Erdogan, the AKP government has used the success of the HDP in the parliamentary elections in June 2015, a state military campaign against the PKK since July 2015, and the failed military coup of July 2016 to successfully dismantle the HDP and carry out comprehensive purges across the political and civil society spectrum of the Kurds.

Since then, numerous arrests and bans have taken place. This has not only affected the HDP leadership, but also its grassroots membership. Thousands of activists have been arrested, while more than 90 HDP mayors have been arbitrarily deposed and placed under state administration. Party leader Selahattin Demirtas and co-president Figen Yuksekdag, not to mention a number of other HDP MPs, have also been imprisoned since November 2016 and are serving long jail sentences. 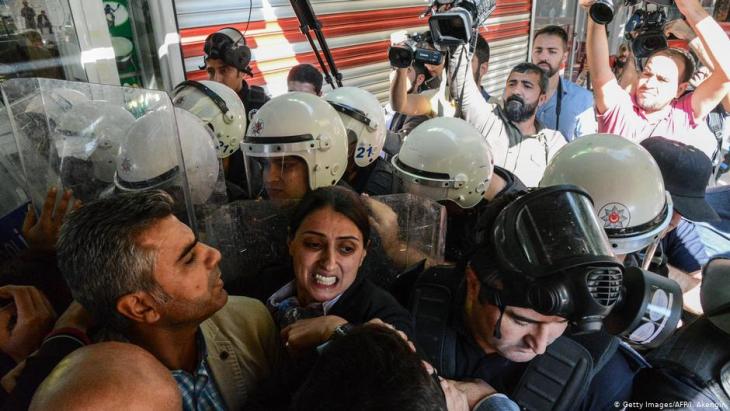 Subject to a state-orchestrated campaign of repression and containment: in recent years Erdoganʹs AKP government has focussed on dismantling the HDP, carrying out comprehensive purges across the Kurdish political and civil society spectrum. Thousands of activists have been arrested and more than 90 HDP mayors arbitrarily deposed. November 2016 saw the imprisonment of party leader Selahattin Demirtas and co-president Figen Yuksekdag, as well as a number of other HDP MPs

Yet, despite repression and containment, the HDP managed to become an important factor in the recent elections and thus a serious democratic political force in Turkey. Beyond marginalisation, repression and unequal electoral conditions, the HDP not only managed to make a decisive contribution to the CHP's victory and to make its key role visible as a factor in the balance. Above all, it was able to recapture many of the mayoral offices in the Kurdish southeast that had been placed under state administration.

Nevertheless, shortly after the local elections, the High Electoral Authority rejected the victory of six HDP mayors on the grounds that the HDP mayors concerned had previously been dismissed from public service by decree and were therefore unsuitable for the office. The HDP rightly criticised the decision as "arbitrary" because the High Electoral Authority had not raised any objections during registration and had admitted the candidates to the election.

The CHPʹs dilemma – between authoritarian Kemalism and democracy

The question remains as to whether the CHP will take this result, achieved thanks to the support of the HDP, as an opportunity to finally abandon its still dominant rigid attitude towards Kurds and the HDP in favour of genuine social democratic liberalisation and integration of the Kurdish demands. This would give the CHP more scope.

So far, however, the CHP still appears to be a long way from this and has not made any public statements regarding co-operation with the HDP. This is mainly due to ideological reasons. The CHP is the original party of founder of the Turkish Republic Mustafa Kemal Ataturk and sees itself to this day as the guardian of Kemalism as a state ideological maxim.

This maxim is determined above all by the primacy of a rigid Turkish nationalism which, since the foundation of the modern republic, has striven towards an authoritarian, omnipotent and centrally organised Turkish nationalist secular unitarian state. This ideological element regards the Kurdish question per se as a threat to Turkish national and territorial unity and prefers an anti-Kurdish attitude.

Even though the social basis of the party contains social democratic and Kurdish elements, Kemalist nationalist elements within the party continue to dominate. Because of this dominance, the party has not yet overcome the basic ideological orientation at its core. Although the CHP has been in government several times over the past few decades, it has never dared to take decisive steps in addressing the Kurdish question. 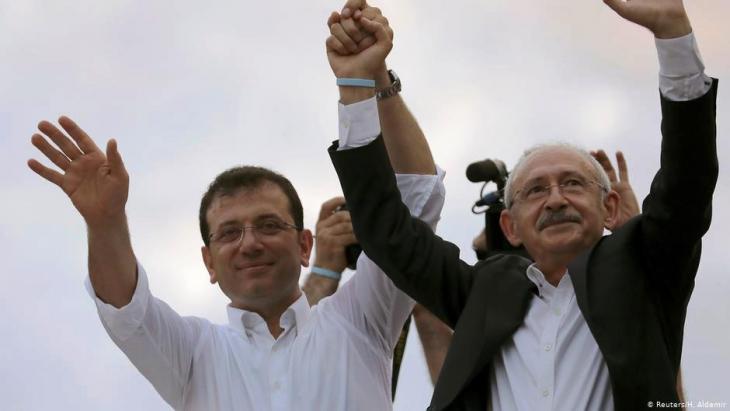 Ataturkʹs legacy: founded as a resistance organisation by Kemal Ataturk on 7 September 1919, the CHP – Republican Peopleʹs Party – remains wedded to the primacy of a rigid Turkish nationalism. This ideological element regards the Kurdish question per se as a threat to Turkish national and territorial unity. Abandoning Kemalism in favour of genuine social democratic liberalisation and integration of the Kurdish demands would give the CHP more scope

In its so-called reports on the situation in the southeast, the party focussed one-sidedly on socio-economic neglect as a conflict-promoting factor, ignoring the political dimension of the Turkish-Kurdish conflict.

As the main opposition party, it consistently criticised the AKP government's peace process with the PKK, which was a taboo break in the history of the modern republic. Furthermore, the CHP remained silent on the repression and marginalisation of the HDP and even voted for the lifting of the immunities of mandate holders in May 2016.

At the same time, it vehemently supported the AKP government's military invasions of the Kurdish territories in northern Syria and northern Iraq to combat the PKK and Kurdish gains. Even the silent alliance with the HDP in the mayoral election was not publicly articulated, except to thank those Kurdish voters who elected Imamoglu.

Thus, the CHP still vacillates between authoritarian Kemalism and the desire to advance democratisation and the ongoing effort to reconcile these opposites. The difficult relationship with Kurds and the HDP is embedded in this context.

As long as the CHP does not resolve this dilemma and does not replace its ideological-authoritarian canon of values with a liberal understanding of the state, nation and protection of minorities, a substantial contribution to the democratisation of the country and to the solution of the Kurdish conflict cannot be expected.

The Turkish government is hoping to split the opposition and put off voters by cracking down on pro-Kurdish politicians. But critics say the strategy won't work this time. By ... END_OF_DOCUMENT_TOKEN_TO_BE_REPLACED

Recently, Twitter has become something of a people's court for Turks seeking justice. Particularly in cases of violence against women and animal rights, social media is regarded ... END_OF_DOCUMENT_TOKEN_TO_BE_REPLACED

Now that he has converted Hagia Sophia back into a mosque, Turkey's president, Recep Tayyip Erdoğan is setting his sights on the Al-Aqsa Mosque in Jerusalem. Joseph Croitoru ... END_OF_DOCUMENT_TOKEN_TO_BE_REPLACED

Ronya Othmann's novel "Die Sommer" (The Summers) tells the story of Leyla – the daughter of a German and a Yazidi Kurd – who visits her grandparents' Yazidi village in northern ... END_OF_DOCUMENT_TOKEN_TO_BE_REPLACED

In the aftermath of the devastating explosions in Beirut, French President Emmanuel Macron is styling himself as Lebanon's saviour. Ultimately, however, the success of his efforts ... END_OF_DOCUMENT_TOKEN_TO_BE_REPLACED

Lacking support from Arab countries for its stance on the Kashmir dispute, Pakistan is looking for new alliances under China's leadership. How practical is it for Islamabad to ... END_OF_DOCUMENT_TOKEN_TO_BE_REPLACED
Author:
Gülistan Gürbey
Date:
Mail:
Send via mail

END_OF_DOCUMENT_TOKEN_TO_BE_REPLACED
Social media
and networks
Subscribe to our
newsletter