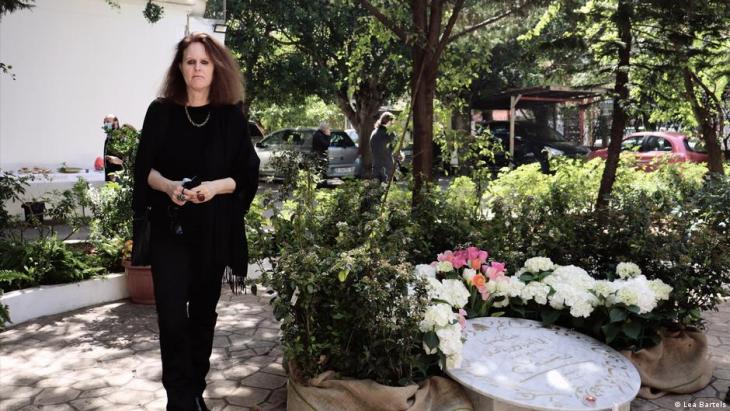 German filmmaker Monika Borgmann, widow of slain Lebanese activist Lokman Slim, is continuing the work they began together in Lebanon. By Lea Bartels

Dozens of files and 8mm films are piled up on a big wooden table at an archive in Beirut, the only one documenting Lebanon's recent past that is accessible to the public. The walls are covered with photos of the city devastated in the civil war. The atmosphere is busy.

Monika Borgmann is seated on a leather sofa. She drinks coffee and smokes as she discusses the ongoing economic crisis and the protests against Lebanon's corrupt and incompetent politicians: "We're angry, and the work here is our driving force," she explains.

Those in power, meanwhile, seem incapable of creating new opportunities in a country that is getting poorer and poorer at an alarming rate – a country that not all that long ago was known as the "Switzerland of the Middle East". Many people have lost hope in the future.

Borgmann is a German filmmaker who found first her vocation and then her husband in Lebanon. She was widowed on 4 February when Lokman Slim, a famous Lebanese intellectual and courageous critic of the powerful Shia militant group Hezbollah, was killed by unknown gunmen.

Though she is composed, tears well up when she talks about her late husband. "He was executed," she says. "It was a political murder. They shot my husband with six bullets."

Borgmann first came to Lebanon in the mid-1980s. She was spending a year in Syria as a student of Islamic Studies and had flown from Damascus to Beirut for New Year's Eve. Lebanon was 10 years into the civil war and the land route was too dangerous. "Something about the country had always fascinated me," she recalls. Even after the murder of her husband, her passion for Lebanon and its people remains. 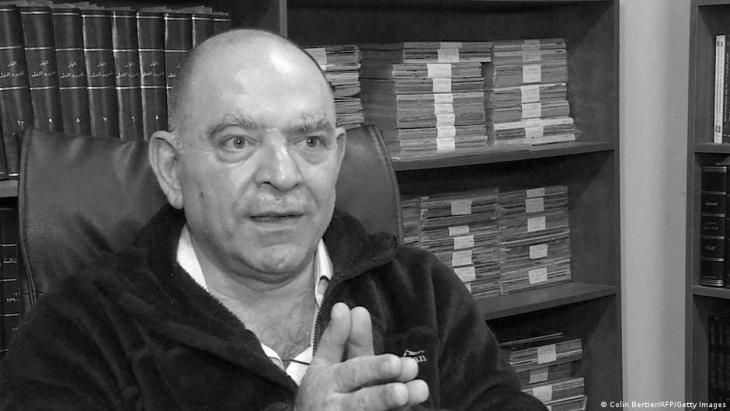 Lokman Slim (pictured here) was a prominent Lebanese intellectual and outspoken critic of the powerful Shia militant group Hezbollah. The son of a Shia lawyer and Christian mother, Lokman grew up in southern Beirut and continued to live there with Borgmann despite the influence of the Hezbollah. He was shot dead in his car by unknown assailants in February of this year

She started working as a freelance journalist from Beirut and later from Cairo, Egypt. Her first radio feature was about daily life in wartime Beirut. She was intrigued by questions such as: "How does one become a perpetrator, a killer?" – questions that had obsessed her during her youth in Germany, when she and her generation started wondering about the responsibility and complicity of many Germans during the Nazi era.

After the Lebanese civil war ended in 1990, Borgmann started interviewing snipers and later mass murderers. In 2001, she was conducting research for a documentary about the 1982 Sabra and Shatila massacre in Beirut when a friend introduced her to Lokman Slim because, as her friend joked, they were both interested in "morbid" subjects.

They started living and working together. Their first joint project was a documentary about the massacre. It featured six of the Christian Phalange militia who were involved in the killing of thousands of civilians over a period of three days and two nights. In it, they talked openly about how they had tortured and murdered people.

"Lokman and I complemented each other," explains Borgmann. They had a common mission, namely to explore and process the past, even if neither of them was able to find a satisfactory answer to the question of why somebody becomes a murderer.

They often faced obstacles in their research. There was no national archive containing detailed eyewitness accounts and historical documents pertaining to the civil war, which lasted 15 years. Education on this subject was also limited. Even though people knew what had happened during the war, accounts of what had happened varied widely depending on the population group. And in schools, history lessons tended to stop in 1943 with Lebanon's independence. 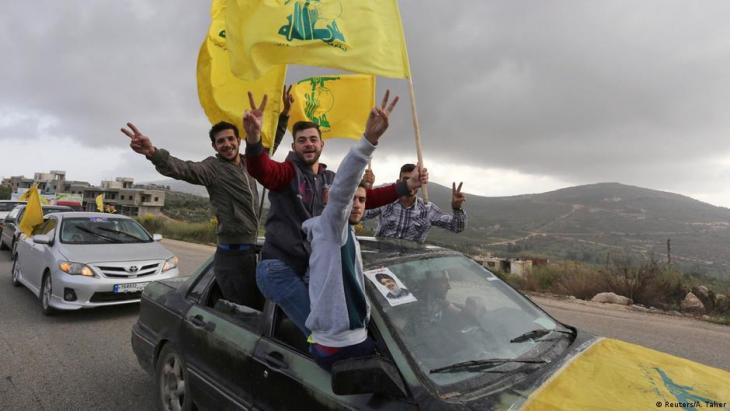 Jubilant supporters of Hezbollah: the "Party of God" was founded in the 1980s in response to the Israeli invasion of southern Lebanon in 1982. Today, Hezbollah is a combination of militia, political party, social organisation and military entity. Filmmaker Monika Borgmann feels that Hezbollah needs the conflict with Israel to justify its existence. But this justification could vanish in a country that is facing its worst economic crisis since the outbreak of the civil war in 1975

"We never feared for our lives"

So Borgmann and Slim decided to set up their own archive and education centre, in the middle of Dahiye, a southern suburb of Beirut, which is now a stronghold of Hezbollah. They wanted their Umam documentation and research centre to link the past to the present. This, says Borgmann is the only way for future generations to learn from the past.

Since 2005, the centre has worked to close the gaps in Lebanon's collective memory. It is supported by Germany's ifa organisation for international cultural relations, as well as the German Foreign Ministry and the Swiss Embassy in Beirut. Workshops, exhibitions and debates with activists, civilians, diplomats and people of different religions and denominations as well as others interested in history and cultural memory are organised here, allowing for unique opportunities for exchange.

But the couple's work also meant that they had enemies. Borgmann says that the threats against her and her husband increased when the Syrian army retreated from Lebanon in 2005. "Each time something important happened in the country, the pressure on us grew," she said. "But we never feared for our lives."

When Lokman Slim was found dead in his car on 4 February 2021, many wondered: "Why now?"

Borgmann can only guess: "Maybe it was his research into the explosion in the port of Beirut in August 2020." He had told journalists just after the blast that he thought only a small fraction of the ammonium nitrate stash had exploded and speculated that the rest had gone to Iraq or Syria. This theory might well have been seen as an accusation by certain members of Lebanon's divided society.

Borgmann says that his murder overstepped a red line. Though nobody ever took responsibility, an eloquent critic of Hezbollah and its allies had been silenced.

The son of a Shia lawyer and Christian mother, Lokman had grown up in southern Beirut and continued to live there with Borgmann despite the influence of the Hezbollah, whom he never shied away from criticising. Describing himself as a Shia atheist, he thought that Hezbollah, which emerged in opposition to Israeli occupation in the 1980s, was manipulated from afar by Iran.

Borgmann says that today, Hezbollah – a combination of militia, political party, social organisation and military entity – needs conflict with Israel to justify its existence. But this justification could dwindle further in a country that is facing its worst economic crisis since the outbreak of the civil war in 1975. Hyperinflation is causing the Lebanese lira to fall by the hour. Most of the population has lost faith in politicians, whether they belong to pro-Western factions or Hezbollah.

In October 2019, mass protests erupted on the streets. Activists and intellectuals, including Borgmann and Slim, met to discuss the situation and possible solutions. In December, a discussion flared up when the couple talked about the idea of neutrality in foreign policy and about finding regional solutions by involving neighbours, including Israel, with which Lebanon is still officially at war. Many Hezbollah supporters felt provoked and accused them of Zionism. They left the premises under police protection.

Borgmann takes another cigarette from her pack, lights it, puts it down and continues to talk. She talks passionately about her politics, art and husband. "We worked and lived together for 20 years. They may have murdered Lokman, but his work lives on in all of us here."

This article was translated from German.

Home
Print
Newsletter
More on this topic
Author and critic Elias Khoury: "Lebanon has always rebelled against political repression"Lebanon after the explosion: Beirut's aftermath – shattering as 15 years of civil warOne month after the Beirut port explosion: "We sweep trauma under the carpet and carry on"Beirut on the brink: Regardless of corona, Lebanon is at economic breaking point
Related Topics
Authoritarianism, Confessionalism, Democracy and civil society, Hezbollah, History of the Near and Middle East, Lebanese Civil War, Shia Islam | Shiite Muslims
All Topics

On 15 June, the "Islamkolleg" in Osnabruck officially launched its new training programme for imams in German. The college is intended to prepare Islamic theologians for their ... END_OF_DOCUMENT_TOKEN_TO_BE_REPLACED

For centuries, the great classical Persian author Hafez has inspired German writers. Translations, adaptions and homages have been created in his wake, and the process continues ... END_OF_DOCUMENT_TOKEN_TO_BE_REPLACED

Business in the Moroccan city of Tangiers is booming due to its location at the nexus of global trade routes. But many locals are failing to reap the benefits. What they crave ... END_OF_DOCUMENT_TOKEN_TO_BE_REPLACED

Morocco and the European Union are at cross purposes when it comes to the Western Sahara. And, as Germany does not support Moroccan claims to the territory, a major conflict has ... END_OF_DOCUMENT_TOKEN_TO_BE_REPLACED

Jewish voices are much more diverse than the public often sees. Jewish men and women who oppose the injustice of Israeli occupation in the West Bank deserve our respect and ... END_OF_DOCUMENT_TOKEN_TO_BE_REPLACED

They’ve already got the Louvre; they’ll soon have a Guggenheim Museum as well – and now the Emirates have added literature to their quest for cultural supremacy in the Arab world ... END_OF_DOCUMENT_TOKEN_TO_BE_REPLACED
Author:
Lea Bartels
Date:
Mail:
Send via mail

END_OF_DOCUMENT_TOKEN_TO_BE_REPLACED
Social media
and networks
Subscribe to our
newsletter