Skip to main content
The Literary Legacy of Mohamed Choukri

A Time of Mistakes

Mohamed Choukri's books rank among the classics of modern world literature. The Moroccan author would have been 75 this month, but there is little to celebrate: all over the world, almost all his books are out of print. Morocco has failed to preserve the legacy of one of its best-known literary figures. Alfred Hackensberger reports 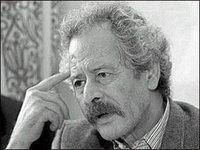 A great literary figure: Mohamed Choukri achieved international renown with his autobiographical novels For Bread Alone and Time of Mistakes

​​ His date of birth, 15 July 1935, was something Mohamed Choukri had to 'reconstruct': "Where I come from, in the countryside, in the Rif mountains, there was no register of births." It was a story he was fond of telling astonished journalists, usually from the West. "We didn't celebrate birthdays either, as is customary in Europe these days." As a result, he said, he might easily have miscalculated his age by several years. "Perhaps I'm much younger, or I could also be much older," Choukri would say, with a wink.

The Moroccan author gave his interviews in the Ritz restaurant in Tangiers. For the last two years of his life, he sat there every morning, always at the same table to the left of the entrance, with a vodka on the rocks in front of him. The "Ritz of Tangiers", of course, has little in common with its glamorous namesake. A bit run down; but not sleazy, like so many bars and restaurants in this Moroccan port.

There, in the Ritz, Mohamed Choukri would receive friends, journalists and fellow authors. Also, from time to time, tourists wanting to see for themselves the famous Moroccan writer, a man who only learned to read and write at the age of 20, whose books they had brought with them on the trip: most frequently For Bread Alone or Time of Mistakes, the two autobiographical novels that elevated him to the status of an internationally celebrated author.

It was here that Choukri had complained about a stubborn bout of bronchitis, which refused to go away despite all the medicine before him on the table; a thick scarf about his neck, cigarette in one hand, vodka glass in the other. Nine months later, in November 2003, after several courses of chemotherapy, he died of lung cancer at the age of 68 in the military hospital in Rabat.

A fearless atheist with his own publishing house

"His death is a huge loss for Moroccan literature," King Mohammed VI himself declared in a message of sympathy. His government had covered the cost of the author's treatment – something that in earlier years Mohamed Choukri could never have dreamed would happen.

"His death is a huge loss for Moroccan literature," said Mohammed VI of Morocco; an extraordinary acknowledgement considering Choukri's books were banned in Morocco for more than 20 years

​​ For twenty years, his books were banned in Morocco. It was not until the succession of Mohammed VI, whose politics were considerably more liberal than those of his dictatorial father, Hassan, that Choukri was "rehabilitated" in 1999. The "Islamicization" taking place in many Arab countries had also gripped Moroccan society, and the government was keen to resolve its strained relationship with the writer, who was critical of religion.

Choukri was on the Islamists' blacklist because, as far as they were concerned, he had in his books written far too openly about sexuality and had called the institution of the family into question. But the convinced atheist paid little attention to them. "There's no reason to be afraid. If it happens, it happens," he said.

His books were printed and published by his own company and were available cheaply in newsagents' on literally every street corner. Nowadays, every school-leaver in Tangiers has read For Bread Alone, or at least knows who Mohamed Choukri is.

A posthumous home for his literary work

Mohamed Choukri was still receiving friends in his hospital room the evening before his death. He was cracking jokes and was very optimistic. He believed he had secured that which was most important to him: a posthumous home for his literary work.

He had in his possession a declaration attested by a notary, his last will and testament, in which he left his entire estate to a foundation that was to be run jointly by five presidents: Mohammed Ashari, the former minister for culture, Hassan Aourid, spokesman for the king, Hassan Neshmi and Mohamed Berada, both ex-presidents of the Writers' Guild, and Abdelhamid Akkar, a university professor and a future president of the Writers' Guild.

"After Choukri's death, this document disappeared without a trace," says Roberto de Hollanda, who was the author's literary agent for many years. "I later contacted Mohammed Ashari and Hassan Neshmi, but I received no reply from them whatsoever."

De Hollanda had discussed with Choukri while he was still alive what should happen to his life's work. "The decision was whether to give it to a European or an American university or whether to entrust it to a Moroccan institution," the literary agent explains.

Mohamed Choukri chose the Moroccan option. For one thing, he was afraid that the government might stop funding his expensive cancer treatment if he gave away the rights to his work to a foreign entity. On the other hand, it would also have been particularly shameful to have given them to one of the countries that had formerly colonized and oppressed Morocco.

"In retrospect, one can say today," continues Roberto de Hollanda, who in the long years of their collaboration was not only Choukri's agent but also became his friend, "that a foreign country would certainly have dealt with it better than the Moroccans themselves."

Indeed, on the Moroccan side, the behaviour of the five presidents of the Choukri Foundation, which was founded by the author but closed down again immediately after his death, remains highly questionable. The assignment of the literary rights to the foundation contravenes Moroccan inheritance law. The family of Mohamed Choukri, two sisters and a brother, are the official heirs and cannot simply be passed over.

​​ Roberto de Hollanda is still asking himself: "Why did these four honourable gentlemen allow Choukri to sign a declaration that they knew had absolutely no validity? An ex-minister and a spokesman for the king would both have been perfectly well-informed about the legal situation." Nonetheless, they allowed Choukri to believe that everything would be all right. "I call that a violation of a man's last will," adds Hollanda, clearly outraged.

His outrage isn't hard to understand. After Choukri's death, the five presidents stuck their heads in the sand and more or less went into hiding. None of them ever attempted to find a solution, let alone come to a sensible agreement with Choukri's heirs, who are, of course, insisting on their rights; there is, after all, a lot of money at stake.

The publishing houses who commission new translations of Choukri's books or want to publish a further edition after expiration of the original contract have their hands tied because of family quarrels about the distribution of the inheritance.

On the 75th anniversary of Choukri's birth, the outcome is, therefore, a gloomy one: with the exception of a few titles in France, Britain and Morocco, his books are no longer available.

It is high time for Morocco to implement an acceptable resolution for all concerned in the "Choukri case". Quite apart from this, it is scarcely reasonable to imagine that a foundation, intended by Choukri to support not only young authors but other artists as well, should be financed solely by the estate of one deceased author – and that in a country where at least a third of the population can neither read nor write.

The Moroccan-Belgian Writer Rachida Lamrabet
Dreaming of "Woman Country"
In her novel "Woman Country", Rachida Lamrabet describes the painful soul-searching of a Moroccan woman who has emigrated to Belgium. The young woman finds herself torn between a western lifestyle and the traditions of her homeland. A review by Volker Kaminski

Letters to a Young Moroccan
The Country of Unrealised Plans
Life is not easy in Morocco. And this was the motivation for writer Abdellah Taïa to ask seventeen other Moroccan writers to write an open letter to their country-folk. These letters have now been published in a book entitled Lettres à un jeune marocain. Kerstin Knipp read it