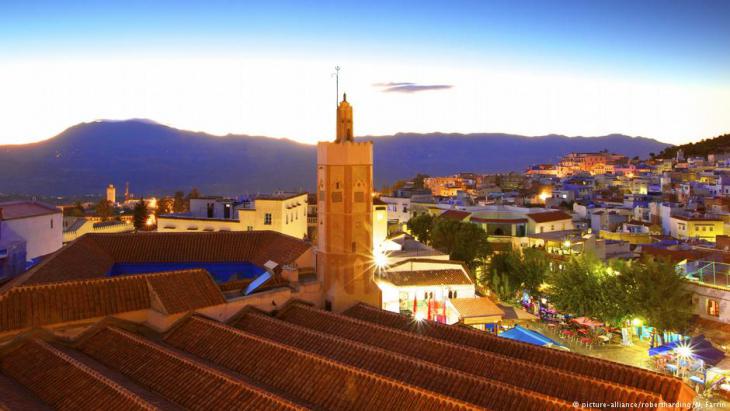 Any journey to southern Spain, to Al-Andalus, is akin to the start of a dream that finds its beguiling continuation beyond the Pillars of Hercules, in the Andalusian cities of northern Morocco – Tangiers, Chefchaouen, Tetouan, Fes, Meknes, Larache and Asilah. The relationship between Morocco and Spain is closer than we think. By Mourad Kusserow

In the narrow and shady alleyways of the white medinas (Arabic for "old town") of Morocco; in the hidden valleys and gorges of the rugged Rif mountains, where far away from the hectic tourist spots vibrant markets and folk festivals are held just as they were 100 years ago and more; where hidden ruins, forgotten and rarely visited by foreigners, bear witness to Mediterranean tribes – Phoenicians, Carthaginians, Romans and Arabs – that arrived as conquerors but assimilated with the obdurate mountain people or had to move on; where the legendary Rif Kabyle leader Abd el-Krim el-Khatabi taught Spanish and French colonial troops the real meaning of fear in a five-year guerrilla war in the first half of the 20th century – it is that here the spirit of the ancient combative Al-Andalus lives on. This is because most of the displaced Andalusian refugees, around two million Muslims and Jews, driven from their homes by the Catholic kings, found acceptance and a homeland in northern Morocco. Many Moroccans are well aware of their Andalusian – European – origins.

But it is first and foremost the two cities Tetouan and Chefchaouen, Morocco's Andalusian gems, which allow us to gain a sense of Andalusian ways of life, in fact even to experience them to a certain extent. The mediaeval ambience and the good fortune – one always vaunted by the Arabs – of an existence far from the constraints of time, have endured here for five hundred years. Tetouan and Chefchaouen, undoubtedly daughters of the city of Granada, are especially proud of their Andalusian past. 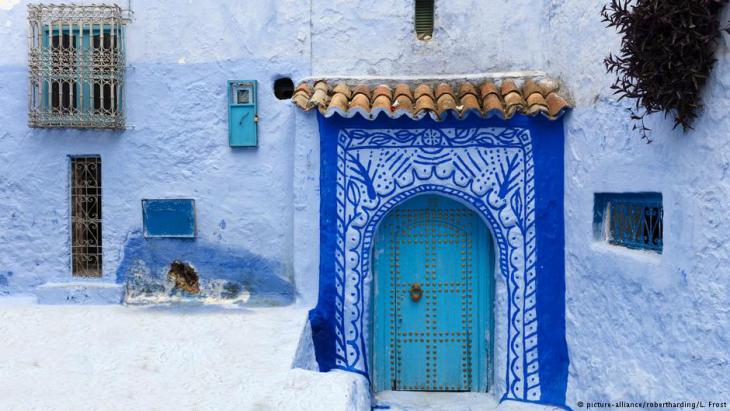 Morocco – gateway to Africa and gateway to the Mediterranean, a melting-pot of cultures and civilisations since ancient times – has managed to meld the Arab-Andalusian genius with the traditions of the mysterious "Amazigh" (Berbers), the indigenous people of the "land on the Atlas"

As early as 1430, the first refugees from Mortil, Baza, Ronda, Loja and Granada, led by a general by the name of Abd ul-Hassan Sli al-Mandari, settled in Tetouan, where they agreed to build their abode from scratch – drawn by the landscape, which reminded them of Granada. Jewish refugees from Al-Andalus then settled next to the medina – a Tetouan neighbourhood known as Mellah (Jewish quarter) dates back to this time.

It was 1501 when the main contingent of Andalusian emigrants finally arrived in Tetouan from Granada; previously, in 1471, displaced Andalusians had founded the city of Chefchaouen, situated some 50 kilometres southeast of Tetouan. Although some moved on into Algeria and Tunisia, the majority of Andalusian refugees, dedicating themselves to the lucrative piracy business in the 17th and 18th centuries, remained stranded in northern Morocco to construct their own Al-Andalus in exile.

Tetouan – arguably the most beautiful city in Africa

They transplanted Andalusian artistry, beauty of form and colour, as well as the Andalusian-Mediterranean charm of their lifestyle, to Tetouan and surrounded the city with a mighty wall – to this day, the Andalusian Old Town of Tetouan with its seven gates is arguably the most beautiful city in Africa, first afforded city rights as early as the year 961 by the Caliph of Cordoba.

Over the course of its 500-year history Tetouan has been able to maintain its Moorish-Spanish character, and more than that: in the heart of all northern Moroccans resides an Andalusian soul. This is manifested not only in the cobalt blue faience – in the opulent ceramic tiles designed with artistic finesse – found in the interior courtyards, mosques, public baths, tea houses, parks, gardens, fountain surrounds and grand houses of Tetouan, but also in Andalusian music, which to this day maintains all its beauty and oriental dynamism in Morocco and throughout the Maghreb. 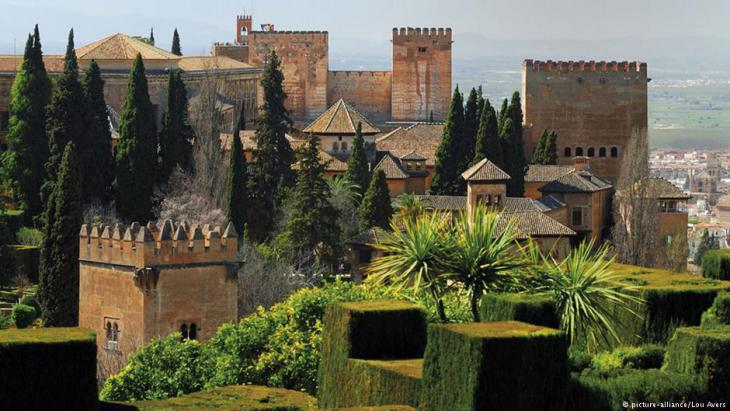 The living heritage of Moorish civilisation: from the Roman Imperium via the Islamic epoch through to the Spanish Protectorate (1912-1956), there still exists in the souls of both Andalusians and northern Moroccans a subconscious memory of the centuries-old community – a sense of respect for the Moroccan-Hispanic legacy of Al-Andalus

Hardly surprising then, that for those from the Orient, Andalusia is – with its Moorish cities Cordoba, Seville and Granada, to name only the major ones – not just a sentimental homecoming to that glittering Iberian – European – Arabia, but also the gate to the Occident, to Europe.

From the Roman Imperium via the Islamic epoch through to the Spanish Protectorate (1912-1956), there still exists in the souls of both Andalusians and northern Moroccans a subconscious memory of the centuries-old community; it is a sense, not of shared identity, but of respect for the Moroccan-Hispanic legacy of Al-Andalus, that has over recent decades been resurrected in the form of "andalucismo".

The Moroccan historian Abdel-Ali Al-Wazani gets to the heart of this Moroccan-Spanish relationship when he characterises Morocco's affinity with Andalusia thus: "Salimos de al-Andalus, pero no salimos de su historia." (We left Al-Andalus, but we didn't leave its history).

Home
Print
Newsletter
More on this topic
Spain: Islam returns to AndalusiaSpain and Ibn Arabi′s heritage: The great master of MurciaLa Mezquita in Cordoba: Is Cordoba denying its Islamic heritage?
Related Topics
Antiquities and historical monuments, Berbers | Amazighs, History of Islam, History of the Near and Middle East, Islam and the West, Islamic architecture, Islamic art, Languages, Travel, Travels in the Orient
All Topics

Turkish author and journalist Mustafa Akyol is one of the foremost pioneers of an Islam reconciled with modernity. Musa Bagrac spoke with Akyol for Qantara.de about his new book " ... END_OF_DOCUMENT_TOKEN_TO_BE_REPLACED

A bird's eye view of eight hundred years of history: Brian A. Catlos tells the story of Al-Andalus in the style of a streaming series and deconstructs the myths of the Reconquista ... END_OF_DOCUMENT_TOKEN_TO_BE_REPLACED

Known to Jews, Muslims, and Christians by three different names – Sefarad, al-Andalus, and Hispania, respectively – the Iberian Peninsula has been a centre of fertile intellectual ... END_OF_DOCUMENT_TOKEN_TO_BE_REPLACED

A heated debate is raging in the Islamic world about whether the religious and political spheres in Islam are one and the same. Before this matter can be settled, the terms " ... END_OF_DOCUMENT_TOKEN_TO_BE_REPLACED

On their fourth CD "Irade" (willpower), Masaa has left its piano sound behind, yet continues with its new guitarist to pursue a path that bridges jazz improvisation and Arabic ... END_OF_DOCUMENT_TOKEN_TO_BE_REPLACED

Muhyiddin Ibn Arabi (1165-1240) is one of the most influential Arab philosophers and mystics. James Morris, Professor of Islamic Theology at Boston College, explains why his ... END_OF_DOCUMENT_TOKEN_TO_BE_REPLACED

Comments for this article: Andalusia begins in northern Morocco

(1)We Moroccans share no serious similarities with Spaniards today besides those carefully forged by certain would-be invaders of Morocco.

(2)Forgive me for saying this, but this kind of discourse is uncomfortably similar to the rhetoric of Francisco Franco and imperial Spain in regards to their justification for occupying of northern Morocco and integrating its natives into Spanish supremacist. Even today this article could have easily been written by a certain secessionist movement (which I will not name) which considers its homeland as encompassing "Andalusians lands" in Morocco.

(3)Why don't we say that Morocco begins in Andalusia? On what basis does modern Spain enjoy the upper hand in the narrative of bygone Andalusia. The modern Andalusians have scant connection to this civilization and its legacy. If you go as a tourist to visit the Alhambra, the locals there will become aggrieved with your interest in the land's Islamic relics and will instead try to divert your attention to the underwhelming relics of the Visigoths instead - the hope being to remind you which of the two was the legitimate history and which was otherwise. Their discrimination in this way is totally understandable because Islamic Spain belongs to Afro-Asia.

END_OF_DOCUMENT_TOKEN_TO_BE_REPLACED
Social media
and networks
Subscribe to our
newsletter