Moroccan art is being roused from a deep slumber. The "Marrakech Art Fair" has just come to an end, Morocco's first trade fair for contemporary art. And the country's artists are sensing fresh impetus in the nation's art scene. Alexander Göbel reports 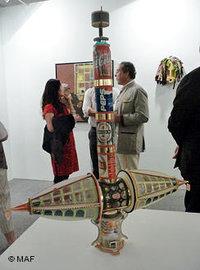 "Appetite for modern art": The young generation of artists in Morocco has long made its appearance on the international stage

​​ In every new beginning there lies a certain magic, and if it were up to Hicham Daoudi, that also applies to the "Marrakech Art Fair". The well-connected director of the trade fair at the luxury Es Saadi hotel attracted 40 galleries from Europe and Morocco to the show, and more than 5,000 wealthy visitors came to the opening event alone. For Hicham Daoudi, a clear sign that Morocco has an appetite for modern art. And that Marrakech, the red city at the foot of the Atlas Mountains, can add yet another string to its bow.

Daoudi says the Art Fair was aimed at transgressing borders and surprising people. "Marrakech has this rosy image as a city of beauty, of delight, of riches. And this is exactly the image that we want to change, because in my view Marrakech is essentially a rock 'n' roll city, a city that challenges, that throws conventions overboard, that fosters creativity."

Appearance on the international stage

The perfect place to finally secure Morocco's place in the art world – as glamorous art market at the interface between Orient and Occident. The Art Fair in Marrakech is setting its sights on the many well-heeled Europeans who would like to see the walls of their sun-drenched Moroccan homes adorned with works of art. Moreover, the number of collectors in Morocco is also growing. 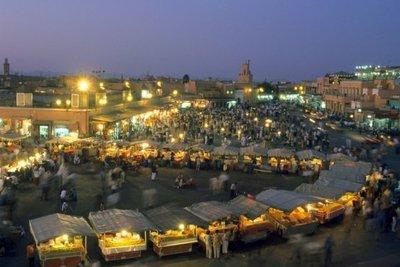 "Marrakech is the perfect place to finally secure Morocco's place in the art world – as glamorous art market at the interface between Orient and Occident," writes Alexander Göbel

​​ Moroccan avantgarde pieces are very popular and sell well: The young generation of artists has long made its appearance on the international stage. Mounir Fatmi is a member of this generation, as well as the photo artist Lalla Essaydi. The latter may have left Morocco a long time ago, but Essaydi still has family living in the country.

"Most of my work is created here," the artist explains. "I meet many Moroccan artists here who are incredibly talented, and it's like a homecoming. I'm rediscovering my homeland through art. And that's a very intense experience."

The "excellence" of new Moroccan art

Lalla Essaydi is impressed by the dynamic, creative chaos that reigns in her homeland's artistic milieu – even though she hopes to see the establishment of many more colleges of art. Culture Minister Bensalem Himmich offers assurances that a great deal of progress has been made in this regard over the past 10 years. Thanks to King Mohammed VI., he says, a young monarch who wants to open up his nation, make art an important pillar of cultural policy and also give art a home.

The minister says that the construction of numerous museums has been planned for the coming years. At last, the culture minister says with confidence, one can not only make favourable comparisons, but above all appreciate the excellence of new Moroccan art: "Morocco has in the meantime attained international levels – and that's absolutely something we shouldn't be hiding." 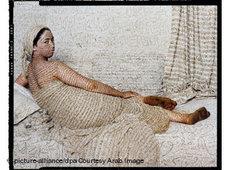 ​​ However, photo artist Lalla Essaydi still has to hide the odd picture, because her work breaks taboos. She plays with the oriental clichés, while issuing subtle criticism of the repression of women. Lalla Essaydi photographs girls in traditional Moroccan settings. In locations that reflect the isolation of the subject of the photograph. The artist then overwrites the photos with henna calligraphy. The text helps the women to throw off their mantle of invisibility. A quiet act of liberation.

While she feels personally free in her work, Essaydi says by way of explanation that she also lives in New York. And there are pieces that are too revealing to show in Morocco, she says. "I work with nudity, with sensuality, and there are boundaries here in this respect. As long as the pieces do not shock or offend religious sensitivities, then everything's fine," explains the photo artist. "I just don't know far I can go here. I think Morocco just isn't quite there yet."

This is why the organisers of the Marrakech Art Fair are hoping for success. After all, with every new trade event that takes place, with every picture sold and with every panel discussion on the subject, Morocco's first art fair could become instrumental in accelerating the liberation process. For contemporary art in general, as well as for upcoming talent in Morocco itself.

Cultural Policy in the Maghreb
Is Northern Africa Losing Its "Soul"?
Poor governance and the pressure of globalisation mean the Maghreb runs the risk of losing its unique character. Yet only a small minority seems to be aware that this development is destroying an irretrievable part of the Maghreb identity. An essay by Beat Stauffer

Hans Werner Geerdts
A Rare Symbiosis
The German painter and writer Hans Werner Geerdts has been living in the Moroccan city of Marrakesh for more than sixty years. His art has made its presence felt throughout the country. Christoph Leisten presents this portrait of the artist on the occasion of his eightieth birthday

Portrait: Singer Hindi Zahra
Nomad between Morocco and Europe
Hindi Zahra is the new face of a young generation of emancipated, cosmopolitan songwriters in North Africa. Her album "Handmade" is due to be released in late February. Stefan Franzen caught up with Hindi Zahra in Paris

Letters to a Young Moroccan
The Country of Unrealised Plans
Life is not easy in Morocco. And this was the motivation for writer Abdellah Taïa to ask seventeen other Moroccan writers to write an open letter to their country-folk. These letters have now been published in a book entitled Lettres à un jeune marocain. Kerstin Knipp read it

END_OF_DOCUMENT_TOKEN_TO_BE_REPLACED
Social media
and networks
Subscribe to our
newsletter