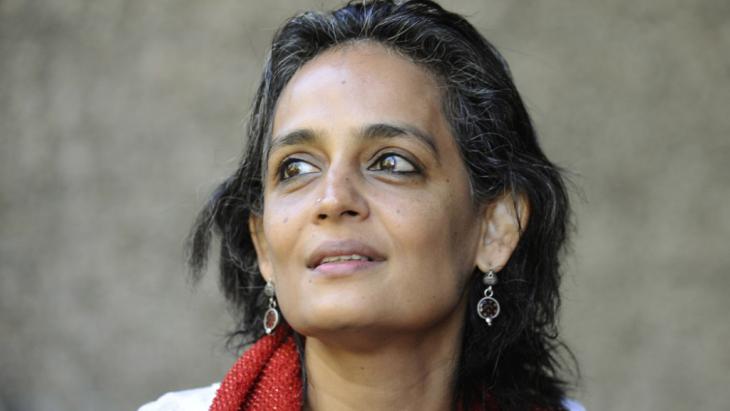 "The Ministry of Utmost Happiness"
Novelist Arundhati Roy: "India is colonising itself"

Described as the "conscience of India" in Time's 2014 list of 100 most influential people, author Arundhati Roy has a voice that counts. Speaking in Berlin, she introduced her long-awaited second work of fiction. By Sabine Peschel

Despite arriving 20 minutes late for her appearance at the Haus der Berliner Festspiele, Arundhati Roy was welcomed with enthusiasm by the thousand spectators. It wasn't quite clear, though, who they were cheering: the writer, the activist or the anti-globalisation demonstrator.

On stage, the 55-year-old Indian author appeared particularly small and delicate next to actress Eva Matthes, who read passages from the German translation of Roy's latest prize-nominated novel, "The Ministry of Utmost Happiness," and the rather tall German writer Gabriele von Arnim, on hand to interview her.

Twenty years after the overwhelming success of her first book, "The God of Small Things," the crowd at Berlin's International Literature Festival was eager to hear why Roy took so long to write her follow-up.

"Soon after I wrote 'The God of Small Things' and it became a success, a very fundamental right-wing Hindu-chauvinist government came to power in India. And the first thing it did was a series of nuclear tests, which was celebrated greatly in India," said Roy. "At that time I was on the cover of every magazine, I was marketed as the face of the new superpower.″

Yet that was not the way she wanted to represent her country. She was repulsed by the idea of being celebrated as the symbol of a nation where terrible things were happening. ″A land where most people couldn't read and didn't have enough food to eat. I wanted to be a writer in this country and not be this person who lived between best-seller lists and literature festivals."

″Politics kicks the door down″

When Roy speaks, she has a powerful presence. It's clear that this is someone who stands for what she believes in. She has fought against the construction of dams which would have displaced millions and spoken out against the destructive consequences of globalisation, global politics and multinationals, Hindu nationalism and the independence of Kashmir. Is she, then, more of an activist than a writer?

When asked, Roy said she doesn't like the term, considering it a label created by the market. "People seem to have reduced the definition of what a writer is," she said. "It's almost as if when you write politically, then you're not a writer, you're an activist, which I find very sad. What is being done to the place of literature?″ Adding that writing is invariably political, she admits, "We have to be really careful how we are used as writers. Politics kicks the door down."

The brutality of the human species

Over nearly 500 pages, Roy writes about schemes, massacres, war and murder, about the brutality of the human species – and she's not afraid to call things by name. But, as moderator Gabriele von Arnim pointed out, she hasn't written an "Indian novel, she wants more than that." "Roy does not sugarcoat but still writes beautifully, beguiling her readers and disturbing them," she said. 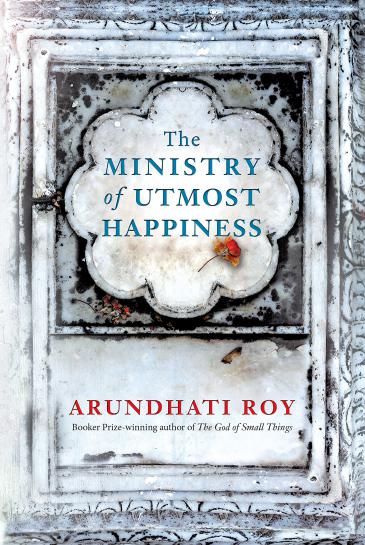 After a break of twenty years, the Indian author Arundhati Roy has brought out a new novel – "The Ministry of Utmost Happiness" – which was ten years in the writing. In 1997 she was awarded the Man Booker Prize for her debut novel, "The God of Small Things"

"This book is about the air we breathe," said Roy. "And that air has love and intimacy and caste and gender and childhood and Kashmir and politics and corporations and media – and everything. A novel should not be about funding headings, like in some NGO application. A novel has to be about everything."

Some readers have interpreted parts of "The Ministry of Utmost Happiness" as magical realism. But the central figure in the novel is one of India's "third sex", hijra as they're locally known, transgender people of whom there are millions in India.

There is nothing magical about this way of life, said Roy. And, she stressed, the story of India and Kashmir can only be told truthfully through fiction. "The only way to try to tell the truth is through fiction. Fiction is truth."

Roy's novel portrays many atrocities and some reviewers were repelled by that.

But a tragic event just days before her appearance in Berlin drove home the fine line between fiction and reality in India. Roy recalled with grief how her friend Gauri Lankesh, a newspaper editor and outspoken critic of the ruling Hindu nationalist party — a writer with similar views to Roy — was shot dead in Bangalore by unknown assailants.

"People are being lynched every day," Roy said. A person can be accused of having consumed beef, for example and suddenly be surrounded by a dangerous mob. "If these things are not pushed back, we lose everything," she said.

War against the poorest

Roy believes boundless hate is dividing the country under Indian Prime Minister Narendra Modi, a Hindu nationalist, with emotions being stirred up by fake news and Internet trolls. "The situation for me and other intellectuals is so dangerous now." She thinks India is experiencing a kind of civil war, all the while presenting itself on the world stage as an economic superpower. "But India is colonising itself. The army and paramilitary organisations are waging war against the poorest," she said.

At the end of the evening, the audience looked a bit shocked. The violence and divisions in present-day India don't seem to have been on the radar for many. But the mood lightens when an excerpt about love was read from Roy's new book. It is a novel, after all.

Pakistan and India have fought three wars and countless skirmishes, but as summers get hotter with climate change, their peoples are united by love for a cooling 115-year-old pink ... END_OF_DOCUMENT_TOKEN_TO_BE_REPLACED

Anger in the Middle East is spreading over comments made by an official of India's ruling BJP about the Prophet Muhammad, with various countries summoning New Delhi's envoy and a ... END_OF_DOCUMENT_TOKEN_TO_BE_REPLACED

Heavy rains and storms are causing huge floods and high water in both countries. Tens of thousands of people have had to leave their homes so far. ... END_OF_DOCUMENT_TOKEN_TO_BE_REPLACED

As the scorching sun beat down on his fruit cart, Mohammad Ikrar dreaded another day of tossing out dozens of rotting mangoes and melons – a regular practice now, as India ... END_OF_DOCUMENT_TOKEN_TO_BE_REPLACED

Twenty-eight-year-old photojournalist Masrat Zahra documents the situation in India-administered Kashmir with her camera. In this interview with Elisa Rheinheimer, she talks about ... END_OF_DOCUMENT_TOKEN_TO_BE_REPLACED
Author:
Sabine Peschel
Date:
Mail:
Send via mail

END_OF_DOCUMENT_TOKEN_TO_BE_REPLACED
Social media
and networks
Subscribe to our
newsletter