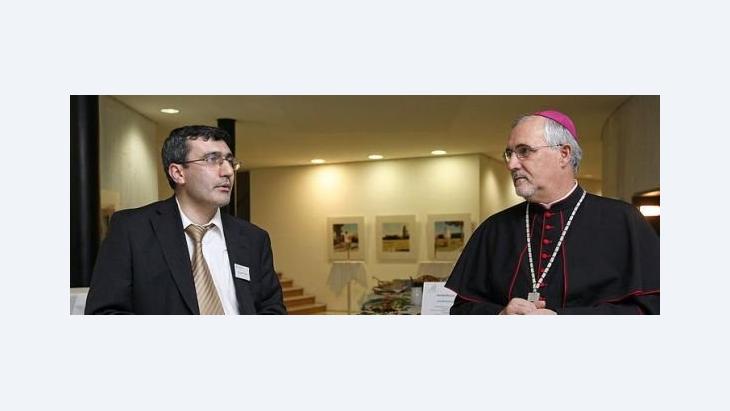 ﻿Proselytising means in part to impose one's faith on others. In a book of collected essays Muslim and Christian theologians explore together how the profession of faith can be lived out appropriately in today's world. By Susanne Kappe

Both Christianity and Islam can look back on a history of the spread of religious faith reaching back thousands of years. Nevertheless, one should under no circumstances make the mistake of applying the phenomenon of the Christian mission to Islam in an undifferentiated fashion – something made amply clear by the collection of essays recently published by the a theological working group, which took place in March 2010.

In this discussion forum, inaugurated by the Catholic Academy in Stuttgart-Rottenburg, Germany, theologians and Islam scholars address issues arising in connection with the relationship between Christianity and Islam.

Even though the idea of the "mission" in Christianity and Islam is not identical, the Islamic concept of da'wa, literally "invitation" or "call", is closely related to the Christian mission. Most authors take da'wa to mean a respectful invitation to a discussion of religious contents, emphasising the communicative dimension of a dialogue. But there are also other concepts comparable to the Christian mission: tabligh ("transmission") for example, the God-given duty not to leave humankind ignorant of divine revelation. 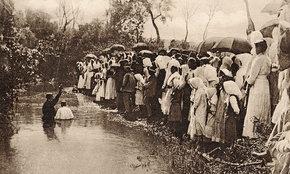 Religion and imperial arrogance: The prevailing image amongst Muslims today is still that of the mission as a Christian strategy to convert all those of other faiths. Pictured: Danish missionary priest baptising in Brazil, 1910

​​The concept of the Christian mission was approached with a great deal more scepticism in the forum, owing among other things to the abuse-ridden history of the colonial missionaries as well as the missionary intentions harboured by certain groups in the field of Orientalism. The prevailing image amongst Muslims today is still that of the mission as a Christian strategy to convert all those of other faiths.

By contrast, the Islamic expansion in the Middle Ages did not have the goal of converting all the subject peoples. Christians, Jews and Zoroastrians were incorporated into the community as wards of the state (dhimmis), obliged only to paying a poll tax. Islamic da'wa activities did not arise until the 19th century, as reaction to similar Christian missionary efforts.

In Indonesia, for example, the Muhammadiyya movement, preaching an orthodox Sunni Islam, came together in deliberate resistance to Christian influences, while at the same time imitating methods of social relief initiated by the missionary societies. Theologically speaking, da'wa in Islam carries nowhere near the same weight as the mission in Christianity, where it is among the religion's fundamental theological principles. 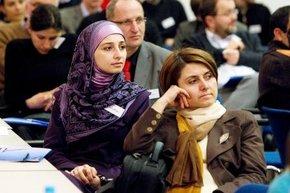 "Explosive theme of the mission": Participants of the Islamic-Christian theological working group in Stuttgart, 2010

​​This Islamic perspective has to do in part with the way the Koran treats Jews and Christians as a single group. There are diverse passages in the Koran dealing with the so-called "people of the book", at times extremely critically and at other times in a more conciliatory manner.

According to the Islam scholar Hüseyin Inam from the Association of Muslim theologians Germany, the Koran condemns the claim to absolute truth made by the Jewish and Christian creeds and instead invokes an earnest belief in one God without declaring Islam as the only path to salvation. Bülent Ucar, professor of religious pedagogy at the University of Osnabrück, comes to the conclusion that the Koran underscores the commonalities between all religions, calling for interreligious debates to be conducted in a reserved manner and "in the most pleasant way".

Mission and dialogue – a contradiction?

In Islam in particular, conversion is a sensitive topic, as the Islamic legal systems in some countries still include laws imposing the death penalty for apostasy. The Muslim authors point out in this connection that, in the early days of Islam, conversion was closely associated with political high treason and was for this reason censured in the Koran. Reference is made there only to a condemnation at the time of the Last Judgement, however. Earthly sanctions are accordingly unjustified and would not longer correspond to today's mainstream interpretation of the Koran. 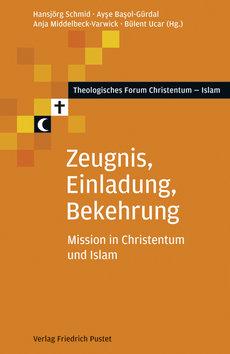 Interreligious debates to be conducted "in the most pleasant way". Cover of "Testimonial, Invitation, Conversion - Mission in Christianity and Islam"

​​What is actually at the heart of the explosive theme of the mission, or da'wa, is the way it at first glance seems to contradict the ideas of pluralism and dialogue. The claim to universal truth on which the motive of the mission is grounded aims at a levelling of pluralistic faiths in order to push through a single religion that alone is regarded as offering salvation.

The consequence of this attitude is to prevent a respectful dialogue between partners who are conceived of as equals, says Naime Cakir, a social educator at the University of Darmstadt. For it would seem nearly impossible to take seriously the arguments of a conversation partner one deems to be misguided and not worthy of salvation.

The book shows what a broad field is already covered by the interreligious discourses on the theme of mission and da'wa among a comparatively homogenous group of learned German-speaking scholars. The great mass of believers are normally not privy to such discourses, however, exposed instead to frequent reports in the media about Muslim extremists who call for "holy war" against the infidels, or of Christian priests burning the Koran.

That this form of mission is long since discredited amongst theologians, who instead understand the idea of mission or da'wa as a testimony to one's own faith within a respectful dialogue, is something the wider public has yet to learn. In this respect, the book makes an important contribution to educating the public about the various forms taken by the mission and da'wa.

This article translated from the German by Jennifer Taylor

Despite what heads of state may claim, the Russian attack on Ukraine is not a wake-up call for a self-confident Europe that defends its values. The war is accelerating the decline ... END_OF_DOCUMENT_TOKEN_TO_BE_REPLACED

At the EU's outer borders, the right of migrants to a fair asylum procedure continues to be systematically disregarded. Take Greece, for example: in the worst case scenario, those ... END_OF_DOCUMENT_TOKEN_TO_BE_REPLACED

Madrid's about-face on the Western Sahara conflict has enraged Algeria. Trade relations have been frozen unilaterally and a cut in gas supplies to Europe could be in the pipeline ... END_OF_DOCUMENT_TOKEN_TO_BE_REPLACED

Mourad al-Marouai was just nine when a landmine killed him on a beach in war-torn Yemen, a tragedy that will haunt his family forever. After a swim, the little boy "suddenly ... END_OF_DOCUMENT_TOKEN_TO_BE_REPLACED

A ceasefire has been in effect in Libya for the past year and a half. Yet after Russia's attack on Ukraine, another proxy war looms in Africa's most oil-rich country. Mirco ... END_OF_DOCUMENT_TOKEN_TO_BE_REPLACED

The Ukraine war has seen energy prices spike with oil producers in the Middle East making more money than ever. But will it put the brakes on long-planned reforms to diversify oil ... END_OF_DOCUMENT_TOKEN_TO_BE_REPLACED
Author:
Susanne Kappe
Date:
Mail:
Send via mail

END_OF_DOCUMENT_TOKEN_TO_BE_REPLACED
Social media
and networks
Subscribe to our
newsletter