Skip to main content
The National Museum in Basra

A Tourist Magnet in Post-war Iraq

The National Museum in Basra has been given a new home and is set to reopen its doors before the end of this year, bringing a highly symbolic degree of normality back to civic life in the city. Sebastian Blottner reports

A jewel on the banks of the Shatt al-Arab: the Lakeside Palace in Saraji, a south-eastern district of Basra, is one of around 50 palaces built by Saddam Hussein, some of which he never used

​​Here in Europe we have a different idea of what a museum director should look like. He might have expensive rimless glasses or grey hair, he would probably wear a sober suit, and he would definitely be one thing: old. That may be the case in Germany. How nice, then, that there are places in the world where you don't have to be a grandfather to be taken seriously and where you can implement an idea that turns into headline news.

Qahtan Alabeed was given the chance to do exactly that at an age when most people in Germany are still studying or have at best a few work experience placements under their belts. He has just turned 30, wears jeans and trainers, and will shortly be moving into an office that has a stunning view of palm trees and water.

Alabeed's office is on the first floor of a splendid edifice originally built for Saddam Hussein. The Lakeside Palace is one of a group of governmental palaces in the south-eastern Saraji district of Basra. It was Alabeed who came up with the idea to house the National Museum there. He was, therefore, the obvious choice to become its director.

The young Iraqi studied Archaeology and is a specialist in cuneiform script. "My first job in 2005 was with the Directorate of Antiquities; then in 2007, I was made a permanent member of staff. A year later I had the job of museum director. It's absolutely insane the amount of work I've had since then; I'm constantly on the road."

This is how Alabeed describes his new life as director of the museum; but he is happy to give up his time. After all, this was his idea. It took a long time, though, for the idea to be implemented – a long and difficult time, especially in post-war Iraq.

Initially Alabeed received no support at all from the Iraqi authorities. "I'd written to the government many times, but they rejected my suggestion that one of the palaces should be converted into a museum," he explains; and that despite the fact that the building, with its luxurious interior decoration, including sumptuous Moroccan mosaics and frescoes, was simply standing empty.

"Saddam had five palaces in Basra alone, and we chose the biggest. But the dictator never even set foot in this building. He wanted to possess everything, but he didn't spend a single night of his life there." 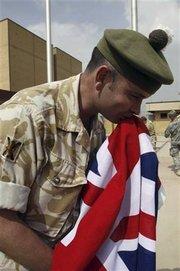 The Basra Museum Project, the aim of which is to preserve Iraq's cultural heritage, received considerable support not only from Iraqi partners, but also from both the British Army and the British Museum

​​In contrast to the Iraqi government, the British troops stationed in Basra took an interest in the project. One day Alabeed received a phone call from the base. "I don't know how the British came to hear about it," he says, "but the commander told me that they wanted to help move the project forward, at first simply by helping to clear up the building. Just a few months later they withdrew from Basra, and back in England they must have spoken to the British Museum, because they then offered to help me. They asked me whether I'd really chosen the right building, and I said they could come and take a look."

No sooner said than done. A group of international experts, which included Margarete van Ess, Iraq expert with the German Archaeological Institute, was put together and dispatched to Basra. They were unanimous in their judgement: the palace was ideally suited to the purpose.

This expertise and the exertion of British influence finally got the ball rolling. After a protracted bureaucratic process, the Iraqi authorities eventually gave their approval. In 2009, the British Museum sealed its cooperation with Alabeed and raised five million dollars in private donations.

With this budget at his disposal, Alabeed began to make plans. The museum staff are paid by the government, and the palace is essentially intact, so almost all of the donated money can be spent on the collections themselves.

In December 2010, in London, Alabeed presented his final concept to the general public for the first time. The Sumerian Gallery and the Basra Gallery, two large exhibition halls of around 400 square metres apiece, will house exhibits from each of the nominal historical eras. Two further rooms of 111 square metres each will be dedicated to the Ashur Gallery and to temporary exhibitions.

Cultural treasures back on display

The Lakeside Palace is not only beautifully decorated with precious mosaics and frescoes, it also has enough space for at least four large exhibition halls

​​The museum brings a highly symbolic degree of normality back to civic life in Basra. The fabulous cultural treasures of the region have been inaccessible to the public for the past few years. The building where the museum was formerly situated in an old quarter of Basra is practically falling down, not to mention the difficulties involved in securing it against burglars.

It is also far too small. Around half the exhibits went missing – stolen and plundered during the war – and those that remained have been in storage in Baghdad for years now.

"Basra has always been the cultural centre of Iraq; that's why people here are so enthusiastic about the project," says the young museum director, who is of course looking forward to the grand opening. "Many people in Basra are very excited about it; they're always asking me when the museum will finally open."

However, the locals are not the only intended beneficiaries of the museum. The idea may sound strange to German ears, but Alabeen can hardly wait to put it into practice: promoting Basra in its new role as a magnet for tourists.

"Of course the situation in Iraq as a whole is not particularly good, but tourists are already starting to come to Basra again because it's quiet here. Our city is situated on the Persian Gulf, and it's the gateway to Iraq. People here are friendly and open-minded. We're a commercial city; no one is surprised to see foreign faces on the streets because they've always been here. Also, we're the Iraqi city with the most buildings on the UNESCO World Heritage List. The oldest Islamic city outside the Arabic world was built on this spot in A.D. 636!"

Qantara.de
Iraq's National Museum Reopens
Only Photos on View of the Nimrud Treasures
The National Museum of Iraq in Baghdad reopened a few weeks ago – prematurely, say critics. Inadequate security systems jeopardise the legacy of Mesopotamia and Babylonia, reports Birgit Svensson from Baghdad

Iraqi Art
A Culture in Exile
Much of contemporary Iraqi art has been produced abroad - the main focus of exiled artists has nevertheless remained on the motherland, as an exhibition in Berlin goes to show. Ariana Mirza recounts here her impressions

Ancient Babylon
A Metaphor for the Dark Side of Civilisation
Was the city state of Babylon in ancient Mesopotamia really a den of iniquity or was it in fact the world's first city of learning? Berlin is currently showing a comprehensive exhibition that dispels the myths about Babel and tells the truth about the ancient city of Babylon. Ariana Mirza reports

END_OF_DOCUMENT_TOKEN_TO_BE_REPLACED
Social media
and networks
Subscribe to our
newsletter