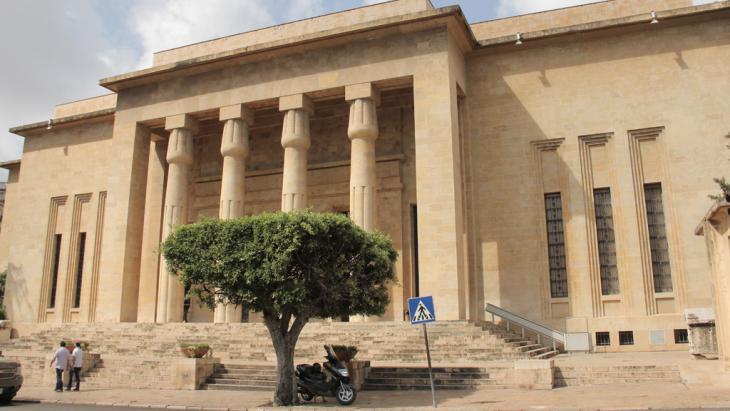 The National Museum in Beirut

Fighting to save the region's cultural heritage

As world heritage sites in Iraq and Syria continue to be bombed, blown up and bulldozed, the question as to what can be done to save their historical treasures has taken on a new urgency. The National Museum in Beirut is playing its part in trying to save the region's cultural heritage. By Juliane Metzker in Beirut

The sniper lay in wait in a makeshift shelter made of old metal drums and tyres. A hole in the wall the size of a plate was enough to give him an overview of the square outside. Hidden away, seeing but unseen, he watched the square, waiting for someone to come within range. In front of him was the so-called "Green Line", the line of demarcation between East and West Beirut during the 15-year civil war in Lebanon.

A photograph in Beirut's National Museum reveals what the sniper's hiding place looked like back then. The picture, next to the bricked-up hole in a wall mosaic, are two stark reminders of what happened in the museum over 25 years ago.

Waging war from inside a museum

"The museum was used as a kind of bunker during the war, with militia barricading themselves inside its walls. Its situation, on the edge of the death zone between East and West Beirut, was of great strategic advantage to them," explains Anne-Marie Afeiche, director of the museum.

Apart from its damaged wall mosaic, the museum bears other scars of war. At one end of the museum gallery stands a statue, a carved colossus of limestone, almost two metres high. Its right-hand side is blackened by soot. "It was very cold here in winter and the militia lit fires. Unfortunately, they singed our colossus in the process," says Afeiche.

Protecting cultural heritage in the Arab world has become a matter of extreme urgency. War and terrorist activity have destroyed many cultural sites in Syria and Iraq in recent years. Despite the fact that some minor damage was done, most of the exhibits in the National Museum in Beirut survived the civil war, which means that its history provides an exemplary lesson in the preservation of cultural treasures in times of conflict. 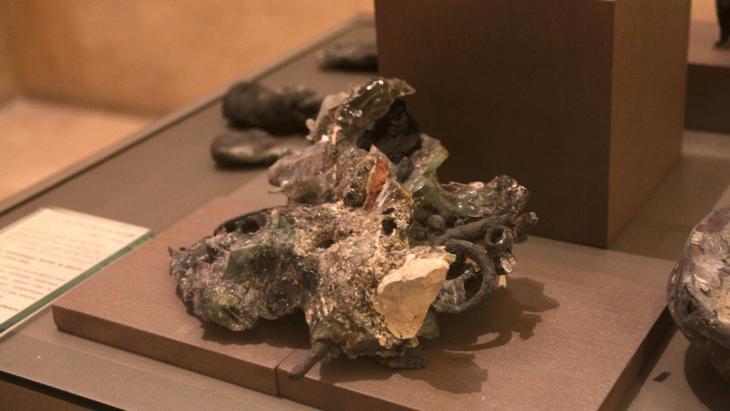 Cultural heritage under attack: bomb, fire and IS attacks in the Middle East are threatening to destroy the war-torn region's ancient cultural treasures. Pictured here: an exhibit that was melted in a fire, National Museum in Beirut, Lebanon

The driving forces behind the rescue of the exhibits were the then director of the museum, Maurice Shehab, and his wife, Olga. They decided to hide the museum's smaller objects by concealing them behind walls in the museum's basement. Larger exhibits presented a more obstinate challenge, however, as the sandbags and wooden planks brought in to protect them were constantly being taken away by the militia. Finally, Shehab hit on the idea of encasing the heavy sarcophagi and statues in huge concrete blocks.

"For 20 years, no one knew the whereabouts of the National Museum's treasures. Maurice Shehab had taken the secret with him to the grave and nothing had been recorded or written down anywhere," says Afeiche. She herself was one of the small team of archaeologists that was among the first to enter the museum after the war. They were astonished by what they found when they decided to open up the concrete blocks and the walls of the basement in 1996.

"The National Museum had a brilliant director, who, above all, had the time to protect the cultural treasures. After all, it is not unknown for time problems to arise in spite of all contingency plans," Afeiche points out.

Lebanese archaeologist Joanne Farchakh Bajjaly stresses the crucial importance of the race against time and the motives for the cultural vandalism when it comes to deciding what measures to take in order to protect artefacts: "In the civil war in Lebanon, the destruction of culture was one of the outcomes of the conflict, but it was not done deliberately. The situation is very different in the wars in Iraq and Syria, however. There, the cultural heritage is itself the target of attacks."

"Cultural vandalism" is not a new phenomenon in the Arab world. It is something Bajjaly has been writing about for years. From 1998 until the end of the Iraq war in 2003, she travelled several times to Iraq, documenting the damage to the cultural sites that were falling victim to bombing and looting. These included the UNESCO world heritage sites at Hatra and Nimrud, both of which were recently devastated by IS militia bulldozers, pneumatic drills and explosives.

Bajjaly herself was also confronted by the sobering reality of the destruction of cultural heritage sites when she worked in Iraq more than ten years ago. "Trying to restore such sites is rather like attempting to bring the dead back to life. In Iraq, I was witness to something that historians would describe as the end of a civilisation. Today the media is turning us all into witnesses to this unfair process."

Fighting the illegal trade in antiquities 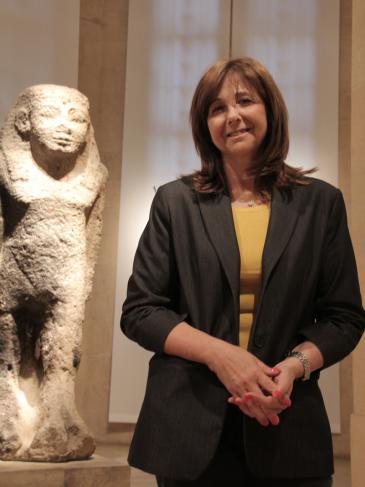 "It is our responsibility to monitor illegal trafficking. Whenever we recover antiquities, we get in touch with our Syrian or Iraqi colleagues and ask them to help us identify the pieces. In this way, we have been able to return many artefacts in recent years," says Anne-Marie Afeiche (pictured here)

So far, prevention and the control of the illegal trade in antiquities are the two strategies that have proved most successful in combating the loss of cultural assets. According to UNESCO, over 400 statues and other artefacts were successfully transported to Damascus before IS seized control of the Syrian desert city of Palmyra. In order to stop the smuggling of stolen art treasures, Arab cultural institutions have also been working closely with both national and international security services.

The National Museum in Beirut is also playing its part in this. "It is our responsibility to monitor illegal trafficking. Whenever we recover antiquities, we get in touch with our Syrian or Iraqi colleagues and ask them to help us identify the pieces. This has allowed us to return many artefacts in recent years," says Afeiche.

Bajjaly considers education to be a third way of stopping the destruction. Maurice Shehab led the way: he saw exactly what was happening during the civil war and was able to save the cultural treasures of the museum for future generations. Now it is the young people who are being trained in how best to protect their cultural heritage. "Biladi" ("my country" in English), is the name of the organisation set up by Bajjaly in 2005. The concept is simple: young people are taken to visit cultural sites and then taught their historical significance in seminars.

The organisation encourages the youngsters to develop their own relationships with their historical inheritance. In this way, Bajjaly believes, the older generation can also benefit from the knowledge gained by its children: "My generation grew up during the war. We didn't have the time to think about saving our culture. Here in Lebanon, we are keen to teach the younger generation of today what it can do to protect its cultural heritage for tomorrow."

Home
Print
Newsletter
More on this topic
Archaeological artefacts and sites in Syria: When historical treasures become pawns in a civil warSyria's cultural heritage under threat: "Virtually nothing is left"The destruction of Yemen's cultural heritage: Treasures of humanity under threat A brief history of Palmyra, the ancient pearl of Syria's desert
Related Topics
'Islamic State' | IS, Antiquities and historical monuments, Archaeology, Art, History of the Near and Middle East, Islamic art
All Topics

Twenty years after 9/11, the world is faced with the dual challenge of Islamophobia and anti-Westernism. Ahmet Kuru argues that Muslims in the West, well versed in both Western ... END_OF_DOCUMENT_TOKEN_TO_BE_REPLACED

Two decades after the attacks of 11 September 2001, the West faces the shattered debris of its failure – not only in Afghanistan, but also in Iraq, Syria, Libya and Yemen. What ... END_OF_DOCUMENT_TOKEN_TO_BE_REPLACED

Twenty years after 9/11, the United States is recalibrating its war policy. However, its assertions that the era of endless wars is over are a myth, writes Maha Hilal END_OF_DOCUMENT_TOKEN_TO_BE_REPLACED

The coronavirus pandemic has turned lives upside down all over the world. In the Middle Ages, however, people lived with epidemics all the time. The best and most famous ... END_OF_DOCUMENT_TOKEN_TO_BE_REPLACED

While agreeing last week to a withdrawal of US combat troops from Iraq, neither Iraqi nor US leaders can admit publicly how much they need each other. By Cathrin Schaer END_OF_DOCUMENT_TOKEN_TO_BE_REPLACED

Reading Hassan Blasim's God 99 is an immersive experience of grief and exaltation, anger and disgust, writes Marcia Lynx Qualey. We join the Iraqi narrator as he sits around in ... END_OF_DOCUMENT_TOKEN_TO_BE_REPLACED
Author:
Juliane Metzker
Date:
Mail:
Send via mail

END_OF_DOCUMENT_TOKEN_TO_BE_REPLACED
Social media
and networks
Subscribe to our
newsletter