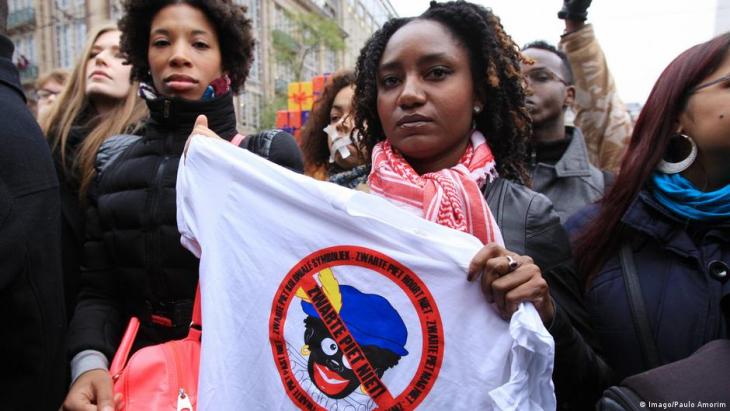 The government in the Netherlands, one of the last European nations to abolish slavery, has made an historic apology. But some feel that there is still a long way to go. By Ella Joyner

It's a crisp December day in Amsterdam. Jennifer Tosch is standing in front of the mayor's official residence at Herengracht 502, prime canal-side real estate in Amsterdam's wealthy Golden Bend district.

The founder of Black Heritage Tours Amsterdam, herself US-born to Surinamese parents, points out a stone plaque in the ground to the right of the front door.

"As long as memory lives, suffering is not in vain," it reads. The house was built in 1672 for Paulus Godin, an administrator in the colonial Dutch West India Company. Like many of his neighbours along the Herengracht canal, the merchant's wealth was amassed at least in part due to slavery, as the sign denotes.

Over centuries, the Dutch bought and shipped some 600,000 enslaved people from Africa in the trans-Atlantic slave trade – about 5 per cent of the total – taking them to Caribbean colonies like Suriname and Curacao, as well as other European colonies across the Americas.

Enslaved Africans were also forcibly moved to Dutch colonies in the Indian Ocean, like present-day Indonesia, and enslaved Balinese or Javanese were transported to modern-day South Africa. 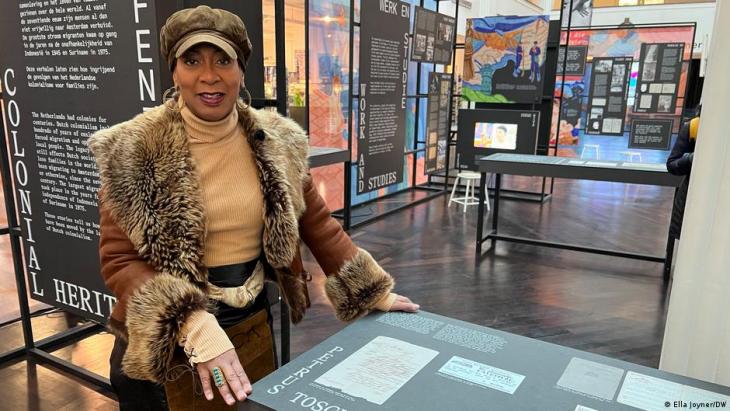 Cultural historian Jennifer Tosch, whose own ancestors include enslaved individuals, set up Black Heritage Tours Amsterdam in 2013 to educate people and break down what she saw as the "willful ignorance" in Dutch society about the dark period of slavery in Dutch history. She is pictured here standing next to an exhibit featuring her ancestor Petrus Tosch at the Amsterdam City Archives

Many perished in the crossing. For those who survived and for their descendants, the life of hard plantation labour was brutal. Take, for example, the case of Wally, an enslaved man on a Surinamese sugar plantation who took part in a revolt in 1707 and whose story was featured in an exhibition at Amsterdam's Rijksmuseum last year.

As punishment for his insubordination, Wally had his flesh torn off with red-hot pincers and was burned alive. His head was later displayed on a spike.

Signs of this more-than-250-year history are everywhere in Amsterdam's built environment if you know where to look, explained cultural historian Tosch, whose own ancestors include enslaved individuals. She set up her tour in 2013 to educate people – locals and tourists – and break down what she saw as "willful ignorance" in Dutch society about this dark period and its modern legacy.

In a sign of shifting times, however, Dutch Prime Minister Mark Rutte apologised on Monday, 19 December 2022 for his country's "slavery past". 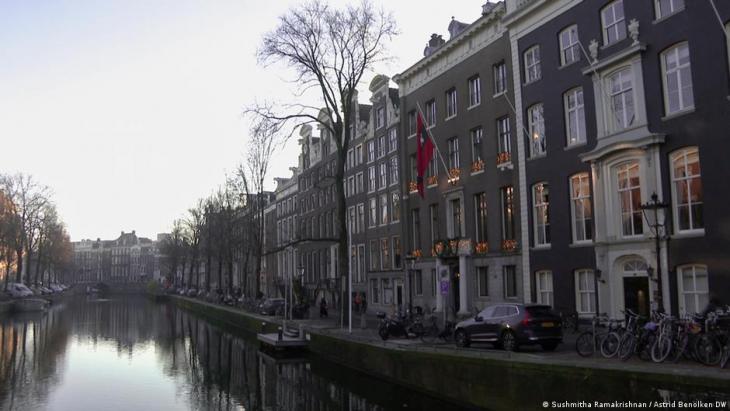 Herengracht 502 (the building with a flag hanging outside) is the official residence of the mayor of Amsterdam. It was built by Paulus Godin, a merchant involved in the slave trade. A stone plaque in the ground outside the building reads "As long as memory lives, suffering is not in vain" denoting the original owner's links to slavery

But before the apology was made, several Surinamese organisations protested over a lack of community consultation and a perceived rush. On 1 July, known as Keti Koti Day, Suriname celebrates the anniversary of its emancipation. Next year marks 150 years since the de facto end of Dutch slavery there, or 160 years since official abolition, and would have been a more meaningful date, activists have said.

Pressure has grown for Europe's former colonial powers to atone for past atrocities, fuelled in part by the Black Lives Matter movement in the US, which has primarily criticised police violence against people of colour but also sharpened the gaze on historic atrocities.

In 2020, Belgium's King Philippe expressed "deep regret" for the atrocities committed during his country's colonial rule in Congo, in particular under his predecessor and relative, Leopold II, but stopped short of actually saying sorry. Germany apologised last year for its early 20th-century genocide in Namibia and promised around €1 billion in development aid. Such declarations rarely translate into actual reparations.

When tour guide and historian Tosch heard about the Dutch plans to apologise, her first reaction was that it wasn't enough. "It's about time, to be honest," she said. "[But] I don't think that you can say 200 million really covers 400 years of colonialism." 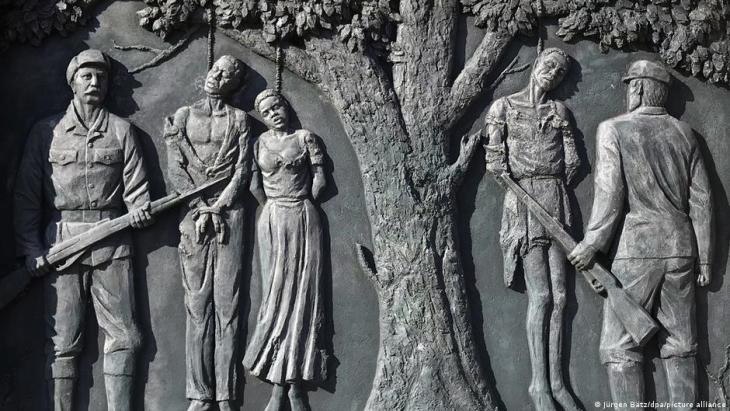 In 2021, Germany apologised for its early 20th-century genocide of the Herero and the Nama in its former colony, German South West Africa (now Namibia), and promised around €1 billion in development aid. According to Ella Joyner, such declarations rarely translate into actual reparations

Tosch first came to the Netherlands as a university exchange student. "I was just so surprised that the dominant narrative […] was so centred around this notion of the glory of the Golden Age," she explained, referring to the period when the Netherlands became one of the world's richest countries.

During the seventeenth century, the Netherlands bounded ahead in science and culture, with famous artists like Rembrandt and Vermeer increasing the country's international prestige. But this was also a time of "war waged against Indigenous people, exploitation of their resources, enslavement of people," said Tosch. "You can't talk about one thing without also talking about the other."

Pepijn Brandon, a professor of global economic and social history at the Vrije Universiteit in Amsterdam, believes the Netherlands' modern prosperity – it has one of the world's highest ratios of gross domestic product per capita – can be traced back to this era.

In the late eighteenth century, around 5 per cent of the Dutch economy depended on slave labour, he told DW. In wealthy Holland, the region which encompasses Amsterdam, Rotterdam and The Hague, it was 10 per cent.

Tosch has seen positive societal change in recent years, like more acknowledgement in public institutions, which she attributes to decades of campaigning by descendant communities. But for her, there's still a long way to go.

There is "so much social injustice, inequality, the gaps in education and in wealth production, in language," she stressed. "If we just stop there and there's no direct action that follows this apology, then it will seem like a token or gesture that wasn't really intended to produce any social change."

The European Union's top court has deemed kosher and halal slaughter incompatible with animal welfare. This is a grim day for religious freedom in Europe, writes Christoph Strack END_OF_DOCUMENT_TOKEN_TO_BE_REPLACED

One year after the burka ban in the Netherlands, Muslim women are reporting increased discrimination and violence. Adding to the frustration, face masks against coronavirus have ... END_OF_DOCUMENT_TOKEN_TO_BE_REPLACED

At the Goethe-Institutʹs Tashweesh Festival, artists and intellectuals from North Africa, Europe and the Middle East meet to discuss stereotypical gender images. By Caren ... END_OF_DOCUMENT_TOKEN_TO_BE_REPLACED

Belgium has been fighting religious radicalisation since it became painfully obvious that Islamists were operating in the country. Art and humour have become tools in the battle ... END_OF_DOCUMENT_TOKEN_TO_BE_REPLACED

In contrast to other cities in Belgium, violent Islamists have found next to no adherents in Mechelen. This is primarily due to the efforts of Mayor Bart Somers: he demands that ... END_OF_DOCUMENT_TOKEN_TO_BE_REPLACED

Iranian women′s rights activist Darya Safai fights the stadium ban for Iranian women from her exile in Brussels. An interview on her protest during the Olympic Games in Rio, the ... END_OF_DOCUMENT_TOKEN_TO_BE_REPLACED
Author:
Ella Joyner
Date:
Mail:
Send via mail

END_OF_DOCUMENT_TOKEN_TO_BE_REPLACED
Social media
and networks
Subscribe to our
newsletter