The Niqab Debate in the Maghreb
A Negation of Women or Religious Freedom?

Until recently, the black, full-body veil was unknown in the Maghreb, where it is now the subject of ongoing controversy. The niqab debate in Europe has put the topic back in the spotlight, as Beat Stauffer reports from Fes

Burqas, niqabs, haiks and khimars … Unlike in Europe, most people in the Maghreb are able to interpret the subtle distinctions in meaning signified by the various different head and body coverings

​​ The rift that has opened up in Maghrebi society is clearly apparent. While the francophone, secular-minded élite show a surprising degree of understanding for a European ban on the full veil, a large proportion of the population regard such a ban with considerable scepticism, or else reject it altogether.

Until just a few years ago, women in some parts of Morocco still wrapped themselves in a broad wool cloth several metres long, which was wound around the head and body. This usually pale-coloured haik had its origins in pre-Islamic times, and its drapery, reminiscent of statues of women from the ancient world, was a source of inspiration for many artists.

But this traditional dress is gradually disappearing – not only in Essaouira, the Atlantic port that was famous for its haik-clad women, but also in other parts of Morocco. Instead, new versions of the full-body veil are rapidly becoming popular. The most common of these is the black niqab, in which a narrow slit leaves only the eyes exposed. In an allusion to the masks worn by riot squads, women who wear the niqab are sometimes referred to as "ravens" or "ninjas".

In addition to the full veil, the number of women in the Maghreb as a whole who cover their heads, either in the traditional or in a more fashionable style, has also increased. Considerably more than half the women in Morocco now wear a headscarf in public. In comparison, only a tiny number wear the niqab, estimated at a few percent of all those who wear the veil.

The situation in Algeria and Tunisia is more or less the same as in Morocco, with regard to both the significance of the phenomenon itself and the public debate about the niqab. In Tunisia, however, the effects of the laicistic doctrine of the former president Habib Bourguiba are still noticeable today: he once openly called upon women to set aside their headscarves. Tunisian women who do wear headscarves are thus also subject to a certain degree of harassment by the authorities; women in the civil service are not allowed to wear the veil to work. 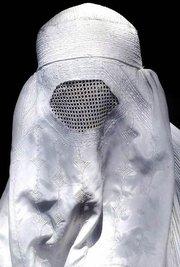 Although very few women in Islamic countries opt for the full body covering, the number of women wearing niqabs and burqas in public is on the rise

​​ Nonetheless, in Tunisia too the past few years have seen a clear increase in the number of women wearing the headscarf. An insider reports that a few women have recently even started to turn up at meetings of the RCD (Tunisia's de facto sole ruling party) in headscarves. This would have been unthinkable not long ago.

Women in niqabs are also increasingly seen on the streets of Tunis, Sfax and Gabès, despite the risk of being classified as sympathizers of radical Islamic splinter groups. In all three countries of the Maghreb, militant Islamists are kept under close surveillance by the police and the secret services. The radical factions of the wide-ranging Islamist movement are the greatest challenge facing the ruling powers, and the secular élites also regard them as a threat.

This circumstance needs to be taken into consideration in the debate about clothing regulations in the Maghreb. Unlike in Europe, with regard to the discussion about the burqa, the niqab and the ordinary headscarf, most people in the Maghreb are able to interpret the subtle distinctions in meaning signified by the various different head and body coverings.

Specifically, in most cases they have no trouble distinguishing between the message conveyed by a fashionable headscarf whose wearer is inspired by an Egyptian TV programme, a traditional hijab, and a black niqab whose wearer also lets it be known, by way of other accessories such as gloves, that she is a strict Muslim who follows the teachings of Wahhabi Islam. 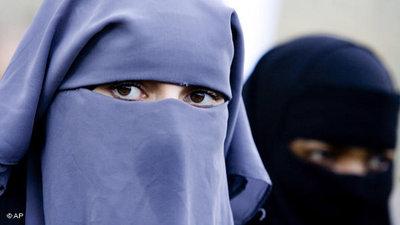 A need for debate: while the secular elite in the Maghreb welcome the idea of a European niqab ban, the majority of the population regard such a ban with considerable scepticism, or else reject it altogether

​​ Women's groups in the countries of the Maghreb already spoke out years ago against the phenomenon of the full veil, expressing a range of opinions from scepticism to outright rejection. In the wake of the niqab debate in Europe, the women concerned have reaffirmed their positions, with the majority of them endorsing a ban on the full-body veil in Europe. The Algerian campaigner for women's rights Yasmina Chouaki, for example, told the AFP news agency that the full veil signified the total negation of women. The Moroccan parliamentary delegate Latifa Jbabi of the socialist party USFP adopted a very similar position when she stated that the full-body veil was a humiliation for women, and argued in favour of a ban on the niqab in both Morocco and Europe.

There is considerable support for a niqab ban in university circles. The sociologist Abdelghani Moundib from Rabat, for example, declared that the West had the right to preserve its laicism. Mohammed Darif, a Moroccan scholar of Islam, also expressed a similar opinion.

What is considerably more surprising is that some renowned Islamic theologians approve of banning the niqab in Europe. Iqbal al-Gharbi, a lecturer at Ezzitouna University in Tunis, believes that a ban is permissible for reasons of security and social coexistence, and argues that Muslims should be accompanied along the path of a peaceful and tolerant "Islam of enlightenment".

However, voices such as these presumably constitute only a small minority among theologians. The Moroccan Council of the Ulema, for example (comparable with a conference of bishops), issued a clear pronouncement against a ban on the niqab. Interestingly, there is also division among Islamist parties and groups in Morocco over the question of whether the full-body veil for women is appropriate for religious reasons.

Other organizations and individuals take a stance against the niqab but reject an official ban. Khadija Ryadi, the president of Morocco's independent human rights organizations, is one of them. Others ask why the niqab has become such an emotionally-charged issue in Europe at this particular time.

​​ Many people, however, welcome public debate on the subject. Among them is Nouzha Skalli, Morocco's minister for social development, family and solidarity. A silent majority, including a large number of state officials, regards a ban on the full veil as an attack on Islam and an attempt to ostracize migrants from the Maghreb in Europe.

For most people in the Maghreb, this feeling, of being victimized yet again for being a Muslim, is probably only a vague one. But a few Islamists claim to see far more in it than this. Among them is the Algerian imam Abdelfettah Zeraoui. He recently declared it to be not merely a campaign but a war against "our people in Europe". He called upon the faithful to take up this "declaration of war", and immediately came up with a proposal: strict clothing regulations to be imposed on female European tourists visiting the Maghreb.

The Burka Battle in France
Losing Sovereignty of Interpretation
The strict rejection of the burka by French president Nicolas Sarkozy has set off a political debate across the country that strongly recalls the 2004 controversy on the presence of religious symbols in public schools. Kersten Knipp reports
´
Niqab Debate in Egypt
Divided Scholars
Hijab, chador, burqa or niqab? – The veiling of Muslim women continues to provoke controversy. This time it is the niqab, or face veil, at the center of the conflict-charged fundamental debate within the Islamic world. By Alfred Hackensberger

The Niqab in Germany
An Unusual Perspective
What is it like to live as a woman who covers her face with a veil in Germany? How do people on the street react? Chamselassil Ayari, a reporter for Deutsche Welle's Arab language service, wore a Muslim full-body covering garment for one day. Her experiment began on a sunny spring Saturday afternoon on Cologne's busiest shopping street

END_OF_DOCUMENT_TOKEN_TO_BE_REPLACED
Social media
and networks
Subscribe to our
newsletter