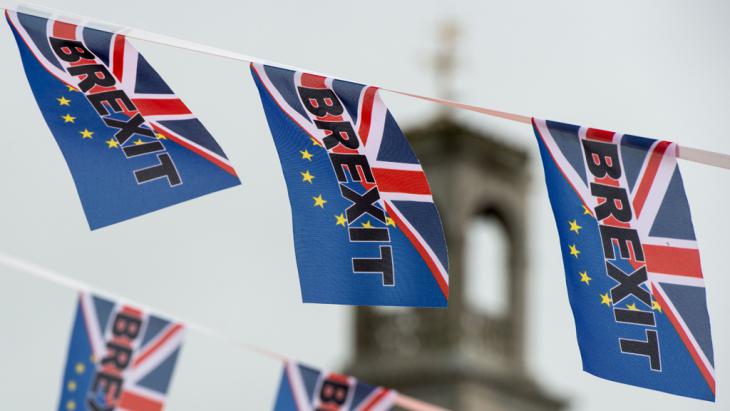 Although a majority of Asian and Muslim voters rejected a Brexit, about a third did vote for the United Kingdom to leave the European Union. Thomas Baerthlein reports from London about their motives – and increasing concerns about the negative fallout of the referendum on all ethnic minorities, particularly Asians and Muslims

″I went to the park for a walk in Greenwich, two teenage boys chanted, ′you have to leave, you have to leave′ as I passed them. Then I heard one woman telling another, ′I don′t think Brexit is about racism′. I didn′t know whether to laugh or cry,″ Apoorva Mishra from London posted on Facebook at the weekend. She came to Britain from India when she was six years old and is a British citizen, so will certainly not be affected by a possible change of immigration rules after the June 23 referendum.

And yet, social media in particular are full of British Asians as well as other minorities reporting that they experienced similar racist remarks after the referendum. ″On the street, obviously there is a kind of paranoid reaction with some people who have voted Leave shouting at any minorities,″ says Shakuntala Banaji, who teaches Media and Communications at the London School of Economics. ″And of course, visible minorities like South Asians and people who look Muslim are suffering the brunt of these kinds of attacks. I myself was racially abused Friday evening at a train station which I′ve used for 20 years without that kind of abuse.″

Mohammad Aslam Ijaz, Chair of Trustees of the South London Islamic Centre and a long-time Labour Party activist, migrated to the UK from Pakistan in the 1960s. The atmosphere created by the Brexit campaign reminds him of the hatred that prompted race riots on several occasions in England in previous decades. ″The same sentiments are being promoted again under this banner. And it is coupled with Islamophobia, which is also being encouraged.″

A ″Remain″ supporter himself, he is proud that his London borough – Lambeth – voted with almost 80% against Brexit. Across the UK, two thirds of Asian voters backed remaining in the EU, as well as 7 out of 10 British Muslims. These findings of an exit poll reflect other polls held in recent months. 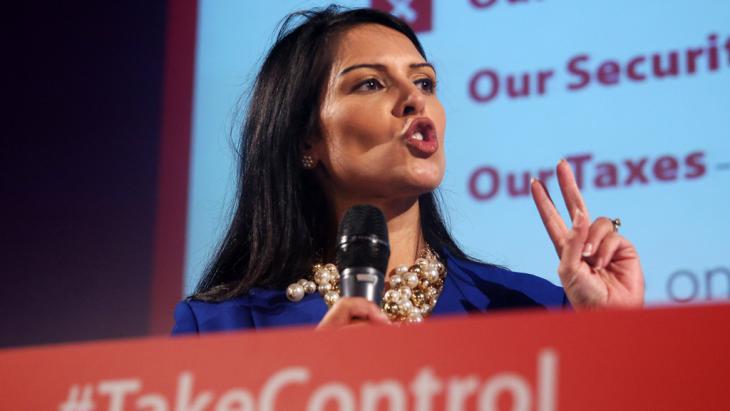 A leading Brexit campaigner: Priti Patel, Conservative Member of Parliament and Labour Minister, was the most prominent Asian during the entire debate

Why did Asians back Brexit?

Yet according to Jill Rutter from the think tank British Future, a higher support among Asians for Remain was to be expected anyway, simply because of the community′s demographics: more of them live in big cities and are younger than the average population – and there was a clear lean towards Remain among young city dwellers, whether of minority background or otherwise. The more intriguing question is perhaps why a third of Asians did indeed vote for Brexit – given that the Leave campaign kept stressing the need to control immigration.

Observers broadly agree on several factors that caused British Asians to vote Leave. Some were identified by a study the think tank Runnymede Trust published some months ago.

″There were quite middle-class British Indians, settled here maybe one generation who voted to leave because they saw it as putting up a wall against other minorities who are coming and draining British resources,″ says Shakuntala Banaji. ″So they bought the narrative about scarce resources and jobs. And they were swayed by arguments of the Conservative politician Priti Patel who argued that we need to give talented youth in India more of a chance to come to the UK [rather than Eastern European migrants].″  Priti Patel, an MP and Minister of State for Employment, was the most visible Asian face during the campaign.

Rashid Razaq, a British Asian playwright and journalist with the London Evening Standard, agrees that minorities who have lived in Britain for longer tend to align their voting behaviour more closely with mainstream society. This not only holds true for well-off Indians. ″In our Northern cities, the Asian communities have perhaps been here for 50-60 years but are still at the bottom of the heap.″ This has led some to vote Leave as ″they see more recent immigrants coming in, perhaps not having to face the obstacles they face in terms of race.″

Razaq adds that culturally, British Asians do not feel connected to Europe in the same way as the average Briton. For one, they usually tend to travel less in Europe and more often to their countries of origin. But there is also a widespread perception that they are less accepted on the Continent. ″Britain has probably been more comfortable with a multicultural identity than many other European countries – because of its colonial past and its Empire. And so the British identity is more comfortable for Black and Asian people,″ explains Razaq. 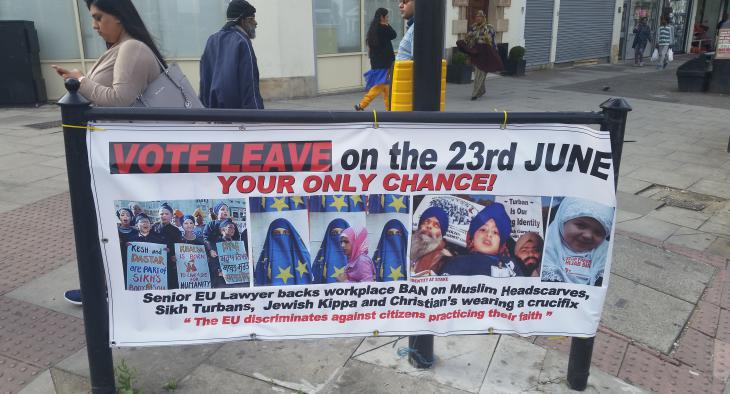 Fears bred of fantasies: a bizarre poster appeared during the Brexit campaign which attempted to persuade religious minorities that the EU had plans to ban turbans and headscarves

Immigration and racism – a tricky debate

Remain supporters frequently attacked Brexiteers, particularly Nigel Farage and his UK Independence Party (UKIP), for promoting xenophobia and racism during the campaign – and the spike in racist incidents after the referendum seems to validate this criticism to some extent.

Many Leave campaigners, on the other hand, reacted furiously to the label of ″racism″. If British Pakistanis or Bangladeshis vote Leave because they feel threatened by new immigrants from Poland and Romania, can they be called racist? British Future′s Jill Rutter argues that their concerns are legitimate and need to be taken seriously by politicians. The Brexit debate ″raised some tensions and highlighted that we haven′t really talked about how longer-resident ethnic minority communities feel about immigration,″ she says. 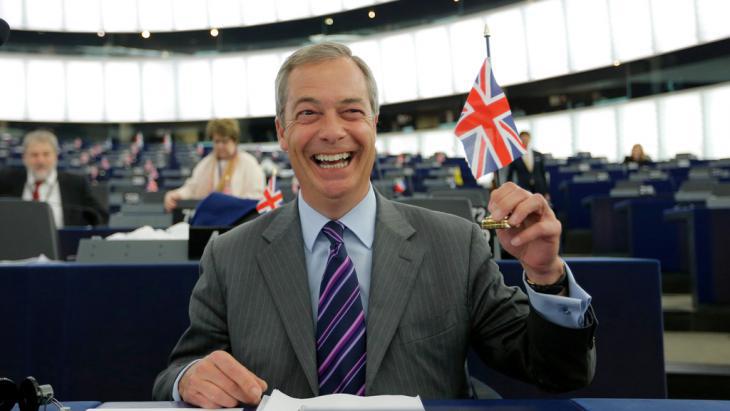 A triumph for "Mr Brexit": right-wing populist Nigel Farage from UKIP (the independence party) spoke of a ″victory for the people″: ″We have escaped from a failing political union,″ said Farage, referring to the EU. ″The Euro-sceptic genie has been set free!"

Rashid Razaq also warns against over-simplification. ″On both sides, there were a lot of white people talking about racism. You didn′t hear a lot of ethnic minorities talking about how they experienced racism, or what it means. Sometimes, ethnic minority communities feel slightly patronised by that.″

″I don′t support the view that everybody who is worried about migration is necessarily a racist themselves,″ says Banaji. ″But unfortunately, on a spectrum of views, the view that migrants are responsible for crises is a racist argument.″

She accuses outside forces of deliberately pitting white and Asian workers in Northern England against each other. ″Unfortunately different groups of people, who have been victimised both by the wealthy establishment as well as by the mainstream newspapers, have bought these narratives against each other and have ended up being mobilised to vote against each other and against their own interests. This is a phenomenon, recognised by media experts, resulting from years of propaganda.″

One of the few issues that is not hotly contested after the Brexit vote is that it has left the country behind with deep divisions of all sorts. It is very difficult to predict at this stage whether the hostile atmosphere against minorities is more than an episode. ″Things may settle down,″ says Shakuntala Banaji. She hopes the well-established multicultural policies in the UK will provide a safeguard.

Rashid Razaq is also cautious, pointing out that the Brexit process will take several years. The issue will need to be watched, he says. ″And particularly for us living in this London bubble, the biggest lesson is to pay more attention to what happens in the rest of England. It is a pretty divided country, and it is not along racial lines. It is more along geography and class.″

Research project "The Global Qur'an", brainchild of Professor of Islamic Studies Johanna Pink and sponsored by the European Research Council, analyses the history and ... END_OF_DOCUMENT_TOKEN_TO_BE_REPLACED

As the Western world emerges from a holiday season made less festive by COVID-19, millions of children in Afghanistan are starting 2022 facing the prospect of famine, illness, and ... END_OF_DOCUMENT_TOKEN_TO_BE_REPLACED

A wedding extravaganza of bright colours, flowers, feasting and dancing, yet the bride, Nefie Eminkova, who comes from Bulgaria's Pomak – Muslim – minority, can see none of it. ... END_OF_DOCUMENT_TOKEN_TO_BE_REPLACED

Every year in December, the team at Qantara.de takes a look back at the articles that proved most popular with our readers. This year is no different. Here is a run-down of the ... END_OF_DOCUMENT_TOKEN_TO_BE_REPLACED

Jesus – Issa in Arabic – doesn’t merely enjoy the highest place among the prophets in the Koran. He is also revered in Islam’s mystical tradition for his message of love and mercy ... END_OF_DOCUMENT_TOKEN_TO_BE_REPLACED

The military in Sudan has never waged war against a neighbour, but it has already staged 17 coups. Tens of thousands of people are risking their lives to oust the military by ... END_OF_DOCUMENT_TOKEN_TO_BE_REPLACED
Author:
Thomas Bärthlein
Date:
Mail:
Send via mail

END_OF_DOCUMENT_TOKEN_TO_BE_REPLACED
Social media
and networks
Subscribe to our
newsletter