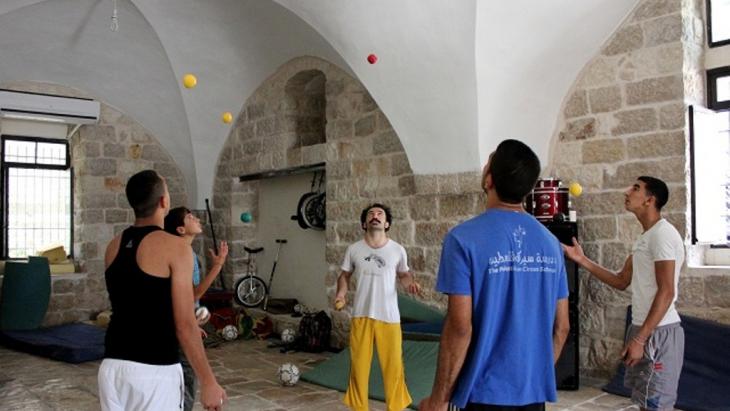 Pupils at the Palestinian Circus School don't just learn how to somersault and juggle, their training gives them the chance to transform their negative energy into self-confidence, creativity and hope – no mean feat in a country where children and young people have to cope with the harsh realities of violence and military occupation. Laura Overmeyer paid the school a visit

The arrow on the sign points to a narrow side street. You have to look twice to find the inscription "Palestinian Circus School". In your mind's eye, you see a huge tent with colourful stripes, a lion jumping through a flaming hoop and trapeze artists swinging at dizzy heights. But this image doesn't really seem to fit in the small and peaceful Palestinian village of Birzeit. Is it some kind of joke?

Not at all! Shadi Zmorrod is co-founder and managing director of the Palestinian Circus School: the "ringmaster" so to speak. But he's not wearing either a top hat or tailcoat, nor is he wielding a whip. "We don't put on a traditional circus here but rather a contemporary one," he explains. No trained animals and knife throwers, no marching band and no popcorn. "Traditional circus is a type of performing art. It's about telling a story using traditional circus techniques such as acrobatics, trapeze, dance, juggling and so on."

The school was founded in 2006. But its story goes back further, to the year 2000, the year when Zmorrod discovered his love for this art form at a circus workshop in Bethlehem and also the year when the Second Intifada would drastically change the lives of Palestinians living in the West Bank. Zmorrod, who had studied acting in West Jerusalem, was bitterly disappointed that his Israeli colleagues refused to protest against the actions of their government. He and other Palestinian artists decided to break off their co-operation.

"Back then I worked abroad a lot, giving workshops and participating in international theatre festivals. But my homeland hadn't lost its hold on me and I decided to go back to Palestine to pass on my knowledge and skills to Palestinian children." Thus was born the idea of a circus school. 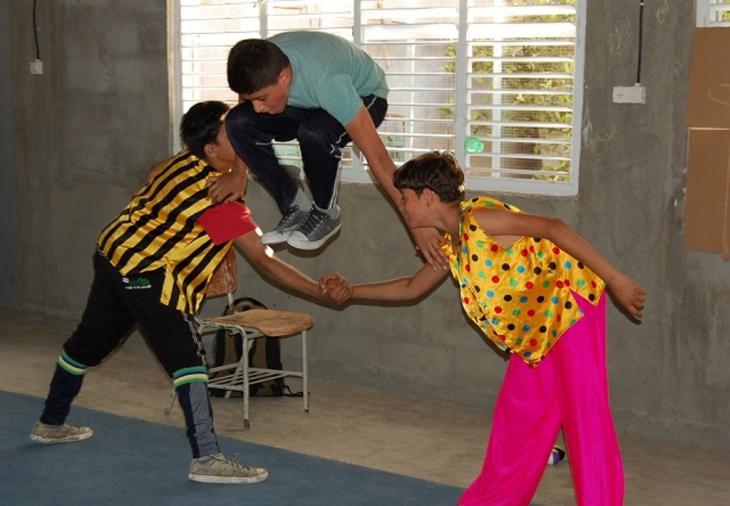 Learning for life: according to Shadi Zmorrod, co-founder and managing director of the Palestinian Circus School, the school wants to "make people aware of how important it is to overcome the conflicts and boundaries within our own society, whether social, cultural, political, religious or gender-related."

Why circus of all things? "We people talk too much – especially in Arab countries," says Zmorrod, laughing. "In Palestine, where bodily awareness hardly exists, it is important to get to know the possibilities and limitations of one's own physical expressiveness."

He goes on to say that young Palestinians in particular have to be given a chance to deal with their experiences expressively, because they are the ones who have suffered the most under Israeli military occupation. Death, violence and arrests, insults and random frustration, walls and checkpoints ... all of this is part of their everyday lives, as is rising unemployment and social instability. Despair and aggression build up into a great deal of negative energy that can be released through performing on the ground and in the air and transformed into self-confidence, creativity and hope.

"The circus is an especially dynamic and experimental type of performing art," explains Zmorrod. "It involves creativity and inclusion, because everyone – regardless of his or her talents – is part of the group."

This is the aspect that appeals the most to Ala': "The circus is so versatile. Everyone can specialise in whatever they do best." The twenty-year-old accounting student from Jenin has been training with the Palestinian Circus School for nearly seven years. It all started when curiosity compelled him to take part in a beginners' workshop offered in Jenin. Today, he makes the almost 2-hour journey south to Birzeit every week to participate in the Friday practice session of the "professional" group.

The dream of a circus career

After starting out in the summer of 2006 as a tiny circus group in Ramallah, the Palestinian Circus School has long since expanded its activities to the entire West Bank: today, young people learn dance, acrobatics and performance skills in Ramallah, Hebron, Jenin and Bethlehem, at the Al Faraa and Jalazon refugee camps, and of course at the headquarters in Birzeit. With 170 students, most of them between 10 and 25 years of age, the school has reached the limits of its capacity. Despite a flood of further requests, Shadi Zmorrod and Jessika Devlieghere, co-founder and co-director of the school, have had to "apply the brakes", as Zmorrod puts it.

Some students of the first generation are now so advanced that they have themselves become instructors and are teaching their own beginner groups. And some have even succeeded in obtaining scholarships to study at one of the prestigious circus schools abroad.

Nayef Abdallah, for example, completed his studies as circus trainer at the "École Nationale de Cirque de Montréal" in Canada this year and has returned to the Palestinian Circus School to teach his eager successors.

Fadi Zmorrod and Ashtar Muallem have likewise realised their dream and, thanks to their degrees from the Italian "Scuola di Cirko Vertigo" and the French "Centre Nationale des Arts de Cirque", officially boast the title of Palestine's first professional circus artistes. At the moment, they are working on their first production with students at the Palestinian Circus School. The show – called "B-Orders" – tells of how Fadi's and Ashtar's own identities as Palestinians were transformed by their experiences abroad. 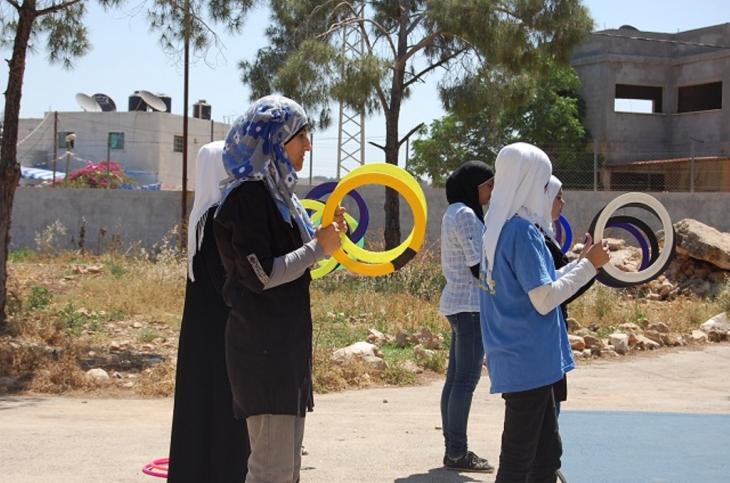 "The circus is an especially dynamic and experimental type of performing art," says Zmorrod. "It involves creativity and inclusion, because everyone – regardless of his or her talents – is part of the group"

The productions are always closely related to the personal history of the artistes, and thus close to the political and social realities in the occupied territories. "Circus behind the Wall" was the Palestinian Circus School's debut show in 2006. It toured Palestine, Italy, France, Germany, Belgium and Egypt and portrayed the daily experiences of the artistes behind the Israeli separation barrier.

"We are often accused of deliberately politicising art, but it's simply the case that nothing in Palestine can be considered apolitical," Zmorrod says.

Nor do the artistes shy away from addressing inter-Palestinian conflicts and criticising outdated traditions. "La Wen" looks at the far-reaching social issue of astronomically high wedding costs in Palestine, while the current production, "Kol Saber", deals with the damaging consequences of internal power struggles – a timeless topic not only in the Palestinian territories.

The Palestinian Circus School enjoys a fine reputation in the circus world. Representatives from international circus schools and associations regularly stop by and organise training workshops. And the school often receives invitations for foreign tours.

This success is of course gratifying, especially as it draws international attention to the Palestinian situation and makes people rethink their stereotypes. But the real target audience is Palestinian society itself.

"With our shows, we want to spread hope among the people and encourage freedom of expression," says Zmorrod. After a short pause, he adds: "But above all we want to make people aware of how important it is to overcome the conflicts and boundaries within our own society, whether social, cultural, political, religious or gender-related. Because internal stability is the precondition for living in peace in the long term."

Fifty-five years after Israel began occupying Palestinian lands, it is more difficult than ever to imagine a way out. The seeds of the two-state solution that were planted by ... END_OF_DOCUMENT_TOKEN_TO_BE_REPLACED

Yazan Khalili is spokesman for The Question of Funding, a collective of artists taking part in the leading German contemporary art festival Documenta 15. Here, he responds to ... END_OF_DOCUMENT_TOKEN_TO_BE_REPLACED

Every week, Jewish, Christian and Muslim youths meet to sing together. And they do so in the middle of a city where Israelis and Palestinians are often at loggerheads. Anja Koch ... END_OF_DOCUMENT_TOKEN_TO_BE_REPLACED

Women in the Levant have long used needlework to depict the region’s history, its landscapes, customs and traditions. Intricately embroidered panels, varying in style, colour and ... END_OF_DOCUMENT_TOKEN_TO_BE_REPLACED

What do we mean when we talk about Palestinian literature: an exploration using the example of Adania Shibli’s slender novel "Minor Detail". By Miryam Schellbach END_OF_DOCUMENT_TOKEN_TO_BE_REPLACED

Dalia Hatuqa is an experienced journalist who has reported on the Israeli-Palestinian conflict from Ramallah, Washington DC and Amman. A writer for Time Magazine, Foreign Affairs ... END_OF_DOCUMENT_TOKEN_TO_BE_REPLACED
Author:
Laura Overmeyer
Date:
Mail:
Send via mail

END_OF_DOCUMENT_TOKEN_TO_BE_REPLACED
Social media
and networks
Subscribe to our
newsletter