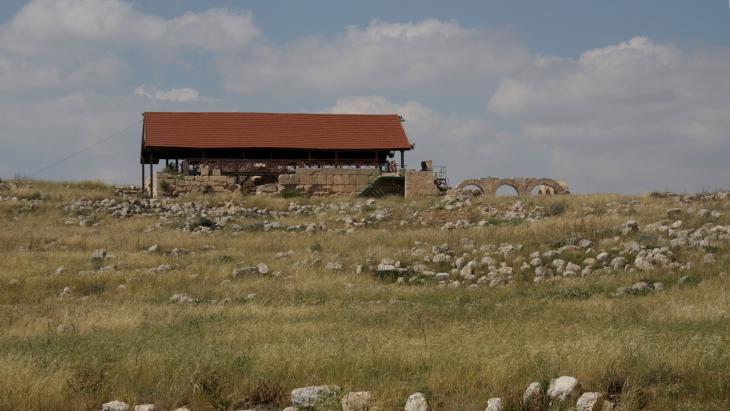 The Palestinian village of Susiya
Archaeology of a dispossession

Susiya is a small Palestinian village in the West Bank. In 1986, when the remains of a synagogue were found in the village, the site was declared a national park and the land confiscated. Residents were relocated to nearby agricultural lands. Last March, the Israeli government sought permission from the High Court of Justice to demolish the village and relocate its residents again, claiming the land for further archaeological work. Ylenia Gostoli visited the village to find out more

On the way to the Palestinian village of Susiya in the South Hebron Hills, the dirt road leading to the village flanks a hill dotted with scattered stones. At the top of the hill is the only discernible, standing structure: an ancient synagogue that later became a mosque. "This used to be our village, I was born there," says 29-year-old Abed Nawaja'a.

The piece of land he is pointing to lies beyond barbed wire, watched over by an army base. The scattered stones are all that remains of Old Susiya. In 1986, the land on which the village had existed since at least the 1830s was expropriated to make room for an archaeological park; its residents relocated to their agricultural lands less than a kilometre away. Palestinians, including the villagers themselves, are not allowed in the site.

At the end of March 2015, the Israeli daily "Haaretz" reported that the government sought permission from the High Court of Justice to demolish the village of Susiya and relocate its residents to the nearby town of Yatta, stating in a response to a petition filed on behalf of the village that "there was no historic Palestinian village at the archaeological site there; that the village consists of only a few seasonal residences for a few families; and the land is necessary for the continuation of archaeological work."

Residents told Qantara.de that the government intends to expand tourism facilities at the site to incorporate the village. A spokesperson for the Coordinator of Government Activities in the Territories (COGAT) told Qantara.de that "as part of the effort for developing the archaeological site at Susiya, works are continuously being done for the preparation of trails, restorations of historical articles found at the site, conservation of the site and its preparation for receiving the visiting public." 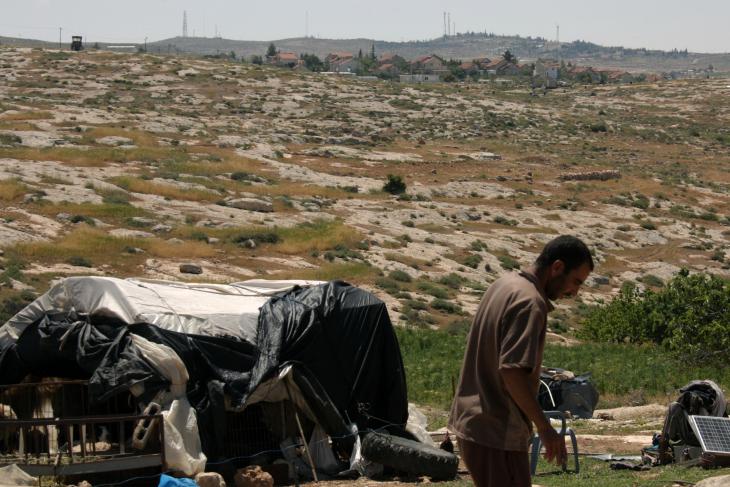 The settlement of Susiya (in the background) was founded in 1983. Last March, the Israeli government sought permission from the High Court of Justice to demolish the Palestinian village of Khirbet Susiya (foreground) and relocate its residents again

An ongoing history of loss

"We were farmers before and we are farmers now," says Mohammad Ahmad Nawaja'a, Abed's father. He was born across the green line, but his family was displaced to Susiya in 1948, where they owned land that they would spend their summers harvesting.

At first glance, time in Khirbet Susiya goes by unacknowledged. Approximately 350 people live here, harvesting olives, herding sheep, growing crops, beekeeping. But time also brought a belt of national-religious settlements to the Hebron Hills as well as frequent harassment and violent attacks against Palestinians, their crops, olive trees and homes, widely documented by various human rights organisations. It brought the red-roofed houses that can be seen across the valley, when the Jewish settlement of Susiya was founded in 1983.

"This is where most of our problems come from," says Mohammad Nawaja'a. All 100 or so structures in the village were served with demolition orders, and the village was destroyed or partly destroyed several times.

Behind the legal push to raze Khirbet Susiya is a right-wing organisation called Regavim, concerned with monitoring what they call illegal construction in Area C. In February 2012, together with the settlement of Susiya, the organisation filed a petition calling on the authorities to implement the demolition orders.

The Palestinian village and the settlement are both in what the Oslo Accords designated as Area C, the 60 per cent of the West Bank under full Israeli control.

Roofs in Khirbet Susiya are, at best, made of tin. Because the Israeli Civil Administration never approved a master plan for the village, permanent structures were never allowed. The courts have frozen the demolitions, but residents are prohibited from building any new structures.

"One time I made a small shelter for my chickens, 1x1 metre, for 6 or 7 shekels," says Azzam Nawaja'a. "The settlers came, took a photo and sent it to the lawyer, who called me to say that if I didn't destroy it myself, I'd have to pay 5,000 shekels (€1,200) for it to be destroyed by the army." Some of Azzam's sons and daughters have already left the village to live in the city. "There is no space, where should they go?"

"25 years in the courts, for nothing," says Azzam. 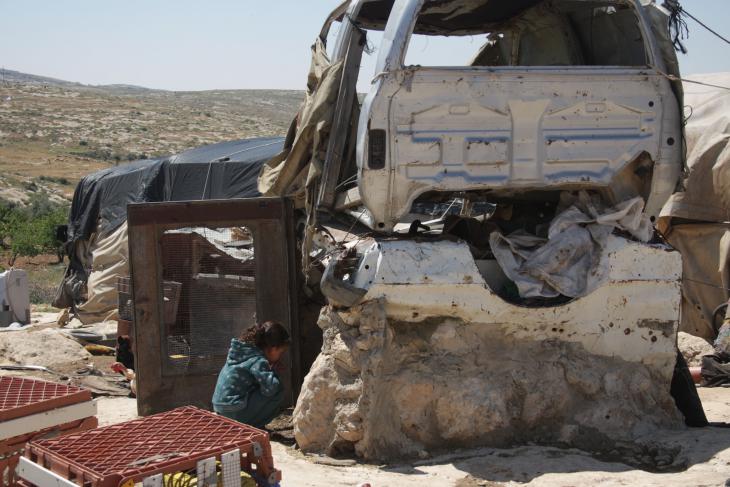 Five master plans for the village of Susiya have been rejected by the Israeli Civil Administration. All structures in the village, like this animal shelter, are temporary and at risk of demolition

Five attempts at preparing a master plan for the village ended in rejection. "We are involved in rule of law issues, in trying to get the government to act where illegal building is taking place, all over Israel and all over Area C," said Ari Briggs, director of international relations at Regavim. Their work, however, focuses on buildings by and for Palestinians, including structures erected by EU donors.

According to Israeli human rights organisation B'Tselem, the Civil Administration has to date refused or avoided approving any master plan for over 90% of Palestinian villages located entirely within Area C. Meanwhile, OCHA (the UN Office for the Coordination of Humanitarian Affairs) figures show that only last year, 601 Palestinian structures were demolished in the West Bank and East Jerusalem, displacing 1,215 people.

In a document published two weeks ago, Amnesty International slammed the planning regime in the West Bank as discriminatory, arguing that it "facilitated the planning, construction and expansion of illegal Israeli settlements," and that the "formal denial of participation in planning for an entire population, coupled with the establishment of a parallel planning system for Israeli settlements that explicitly discriminates in favour of another population whose very presence living in the territory in question violates international law, is unique globally."

A recent report (Under the Radar, 2015) by Israeli NGO Yesh Din argues that since 2011, legalising settlements has been the "unofficial policy" of the Netanyahu government, showing that a quarter of outposts (illegal under Israeli as well as international law) in the West Bank have either been approved or are in the process of being approved by the government. 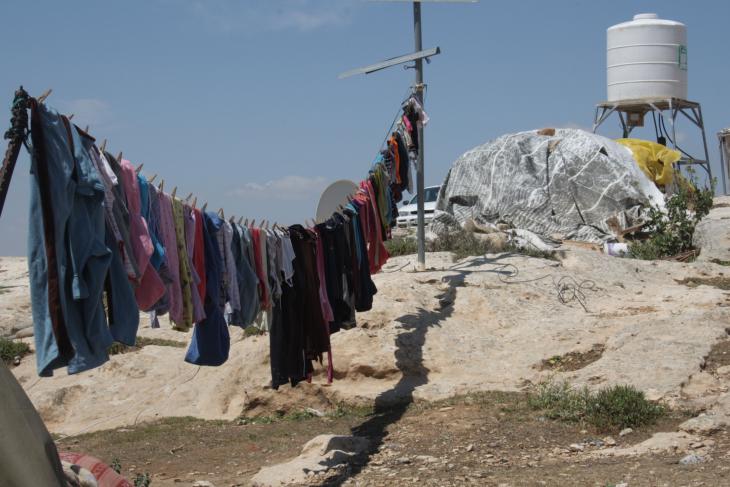 Susiya, as an "unrecognised" village, is not connected to water and electrical lines. Residents buy water at a much higher price than the nearby settlements, which are connected to water infrastructure. "They only build illegally because they aren't allowed to build, and they do not have electricity and water because the civil administration doesn't allow them to have electricity and water," said Avital Sharon of Rabbis for Human Rights

In 2010, the Susiya archaeological park was designated a National Heritage Site, one of six Israeli sites located in the West Bank. Netanyahu had invested $190 million in the project. Some sites such as Susiya and Tel Shiloh are managed by settler foundations.

"Archaeology is very significant to justifying settlement activity, and this is why the Netanyahu government made this investment," Hamed Salem, professor of History and Archaeology at Birzeit University, told Qantara.de.

In the eighth century, a mosque was built on the remains of the ancient synagogue in old Susiya. But a visit to the site today provides very little information about the non-Jewish history of the place.

"What we know from the excavations is that it used to be a large village from the second to the thirteenth century. We definitely know about the presence of a Jewish population in Susiya from the fourth to the sixth century. Then we see a change in the population," said Yonathan Mizrachi, an Israeli archaeologist part of a group called Emek Shaveh, which challenges the political use of archaeology. "Archaeologists also found inscriptions in Arabic which were never published but are believed to have been part of the mosque."

"The story of the village didn't end in the eighth century. The historical narrative cannot be only about one nation, or one period, or one religion."

It is possible to write about the Holocaust and the crimes of colonial powers without downplaying anything. In her latest book, Charlotte Wiedemann focuses on the numerous blind ... END_OF_DOCUMENT_TOKEN_TO_BE_REPLACED

The Palestinian militant organisation Hamas, with Hezbollah's help, is building up a military presence in Lebanon, the ultimate consequences of which could be devastating, writes ... END_OF_DOCUMENT_TOKEN_TO_BE_REPLACED

With his fist bump greeting for a man he previously called a pariah, US President Biden has paved the way for Saudi Crown Prince Mohammed bin Salman's return to the international ... END_OF_DOCUMENT_TOKEN_TO_BE_REPLACED

Asked about the Shoah, Palestinians often bring up the Nakba, the displacement of Palestinians associated with the founding of the state of Israel. An Israeli Holocaust researcher ... END_OF_DOCUMENT_TOKEN_TO_BE_REPLACED

Foresight is needed to turn the tide of German policy. Being independent of Russia must not lead to dependence on authoritarian regimes in the Middle East. By Kristin Helberg END_OF_DOCUMENT_TOKEN_TO_BE_REPLACED

For many years, world-famous conductor Zubin Mehta has worked tirelessly to strengthen relations between Arabs and Jews, sponsoring projects such as "Road to Recovery", which is ... END_OF_DOCUMENT_TOKEN_TO_BE_REPLACED

Comments for this article: Archaeology of a dispossession

Omitted by the author

Interesting how the most important fact about the area of Susiya was omitted by the author that is that the land is State Land as registered in Ottoman times, Jordanian and now under Israel. Inventing some story about ownership may convince some of your readers but the facts are the facts!! One has to question the authors intent in excluding this detail.

Excellent article impressed with the site. As I was looking for information. Best regards. Any policies by governments must be (seen to be) equitable and inclusive. Collective punishments are of a different order. Supreme Court decisions in favour of Arab occupants in villages in the past have been ignored, or set aside by (populist) politicians. playing on the fears of its population. Natanyahu follows (Ariel Sharon) and initiates policies that are undermining the very nature of the State of Israel, morally and legally in International Law

Mr. Briggs, how come the Israeli Civil Administration itself has recognized the authenticity of Ottoman land documents that testify the ownership of the Nawaja and Jabor families over the land of Khirbet Susiya? Are you also willing to claim the Civil Administration is inventing stories? As you said, facts are facts.

END_OF_DOCUMENT_TOKEN_TO_BE_REPLACED
Social media
and networks
Subscribe to our
newsletter