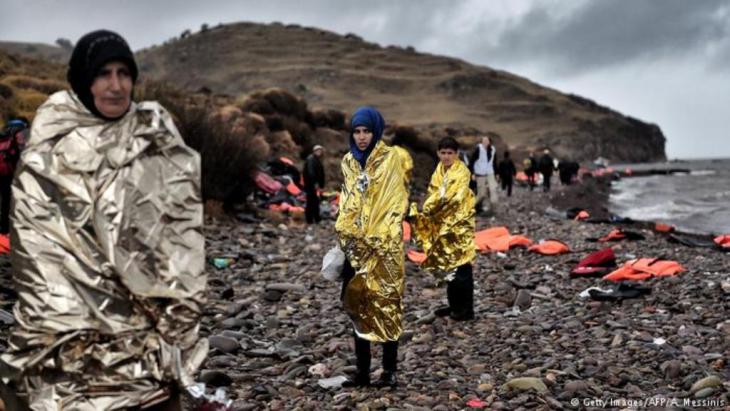 How do we want to live?

The idea that refugees are either victims or invaders is having a major impact on public debate within Germany. In interview with Sarah Kanning, social scientist Heidrun Friese provides insights into her latest research

Ms Friese, you travelled to Lima, Peru, in May 2017 at the invitation of the Goethe-Institut to exchange experiences with international experts about migration, migratory movements and hospitality. What can Germany learn from other countries?

Heidrun Friese: Germany and Europe always feel themselves so much at the centre of globalisation and the so-called refugee crisis. But when we see how many people around the world are on the move and what a negligible portion of them Europe receives, the European Union must significantly qualify its self-perception.

In 2011 Tunisia accepted hundreds of thousands of refugees from Libya and is still much more relaxed about this than we are. Most of those on the move remain anyway in their respective region. At present, Pakistan accepts the largest percentage of people. Jordan, the inland migrations in Latin America – compared with these, the problems that Europe thinks it has are downright piddling. We live today in a trans-national world.

People have always been on the move and sought a better future elsewhere – right?

Friese: Yes, of course. We can′t even conceive of society without movement. To think that countries can barricade themselves against others, set upper limits for refugees and put up walls is absurd. If people want to move, nothing is going to stop them. 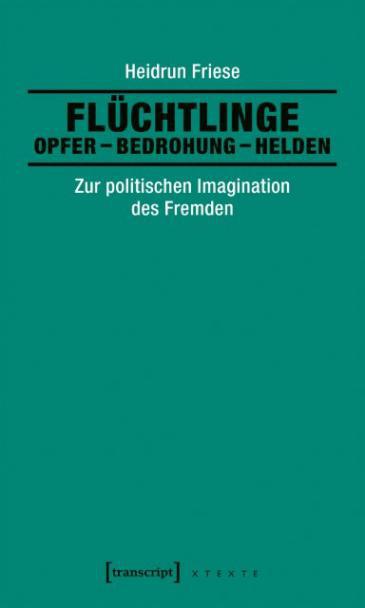 A discourse that ignores the individual: the public debate currently raging about refugees seeking protection in Europe is dominated by powerful verbal images. Heidrun Friese′s research into how our social imagination handles the concept of migrants reveals two main strands: the idea of the ′foreign′ as a threat expresses populist racism and provides politicians with the justification for stepping up security measures; a humanitarian, religious and ethical approach, on the other hand, casts refugees in the role of helpless victims

Is that a plea for opening all borders?

Friese: We scientists aren′t politicians. Our task is to warn and take a critical position. This applies, for instance, to a different European and international mobility policy. It′s a big myth that the entire African continent is sitting on packed suitcases.

I like to recall the year that the Berlin Wall fell, 1989, when it was said that the whole Soviet Union was sitting on packed suitcases. And then after the collapse of the Soviet Union, far fewer people came than had been anticipated.

It′s true however that without freedom of travel a kind of pressure cooker mentality, or East German phenomenon, can develop: myths and legends are rife, the grass is always greener on the other side.

How can Europe counteract this?

Friese: We Europeans are so keen on invoking our Judeo-Christian-European values. Perhaps we should first realise that, in the Bible, hospitality is third amongst the works of mercy. What is meant is an unrestricted hospitality, not bound up with questions like “Where do you come from and what use are you to me?” Nor with the implication that guests should know when they are not wanted. The Arab Spring showed it′s not enough to have enough to eat. People want to live free and not at constant risk of incarceration. Instead of investing billions in developmental aid, we should be strengthening civil society in Tunisia, Libya and Egypt and supporting democratisation.

In your book "Fluchtlinge: Opfer – Bedrohung – Helden" (Refugees: Victims – Threat – Heroes), you investigate how refugees are perceived in society. What approach did you take?

Friese: My book is about "social imagination", that is, how we imagine something without really thinking about it. In every introductory course on intercultural communication, I ask my students about their ideas of the Orient. Then comes the magic carpet, the 1001 Nights, Ali Baba; always the same images with which we first make others into ′the others′. And these don′t correspond to the pictures I then show them of men driving SUVs and using smartphones.

Why is our social imagination with regard to refugees so disastrous?

Friese: The ascriptions are now firmly anchored in political discourse. To see refugees as a threat, as invaders or parasites, is currently part and parcel of populist discourse. The topos that treats the other as a potential enemy is very old.

The concept of the victim is just as misleading because it reduces human beings to helpless creatures without the power to act. This message is conveyed, for example, by ever more drastic photographs of people drowning. The discourse takes aim at our emotions and is deeply apolitical.

The third image may be found in the discourse of revolutionary leftist activists. The refugees are heroised. From these images, we think we know all about these people. But the perfectly ordinary people, the family fathers, the job seekers, don′t appear at all in this discourse. This is how they are deprived of their individuality and self-determination.

Children on the run

Never before have so many boys and girls been fleeing war and poverty. In camps in Asia and Africa, or on the risky journey to Europe, more than 20 million children are hoping for a better future. By Andreas Gorzewski 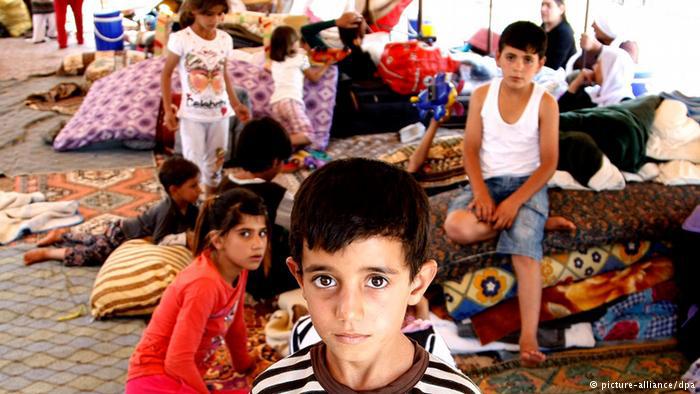 Tens of thousands of Yazidis have fled the terror group "Islamic State" in Iraq this past year. Nobody knows when they will be able to return to their home villages in the Sinjar Mountains. Like this boy in a refugee camp in Silopi near the Turkish-Iraqi border, they still face an uncertain future 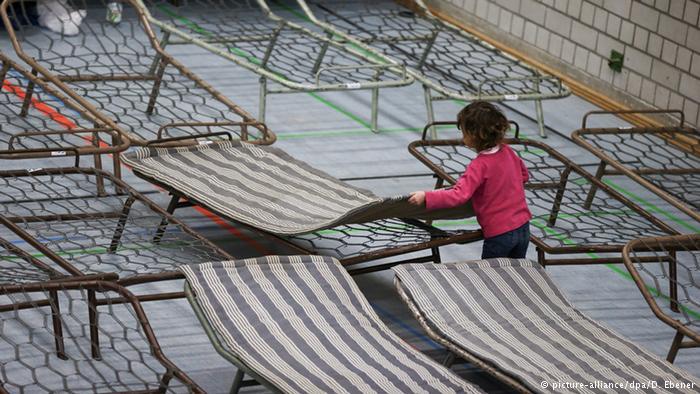 In many German municipalities, people seeking refuge have to be accommodated in emergency shelters set up in large halls. In this gymnasium in the northern Bavarian town of Neustadt bei Coburg, a child helps to get the camp beds ready for the night 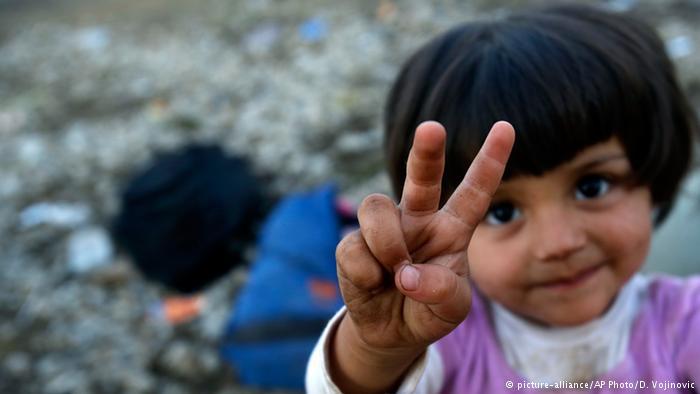 Although this little girl is stranded in no mans' land between Greece and Macedonia, she still manages a confident grin. In the past few weeks, thousands of people have tried to pass through the region to catch trains to Serbia, then onwards to Hungary 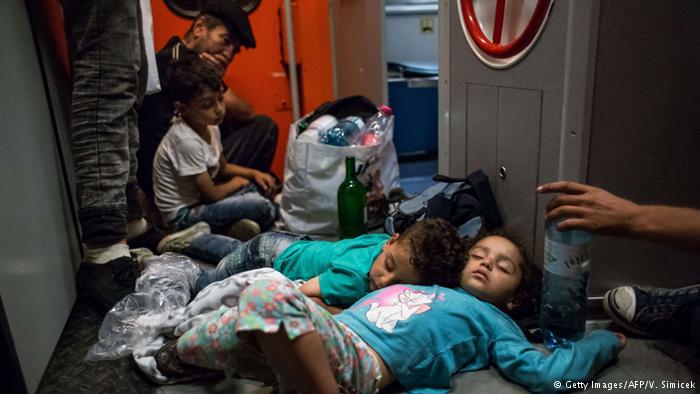 In a crowded train travelling from Budapest to Munich, refugee children sleep in the aisle. Like thousands of other people, they're making the attempt to reach Western Europe via the Balkans. Hungary, like other EU nations, let them through for a short while, before sealing off its borders 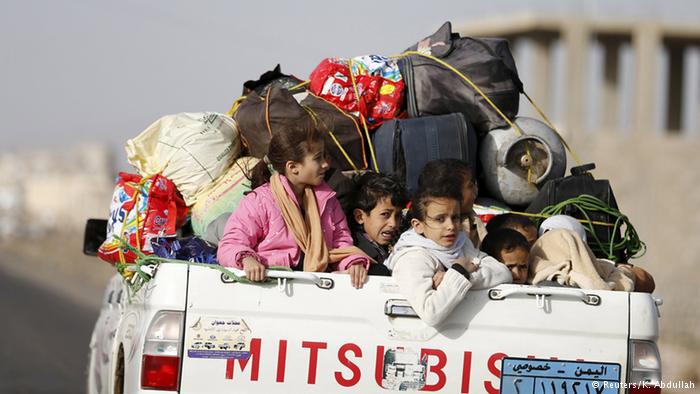 In Yemen, tens of thousands of people have packed up their families and belongings to escape the violence in one of the Arab world's poorest countries. Houthi rebels and Saudi-backed government troops have been warring for months. Among the thousands of dead are many children 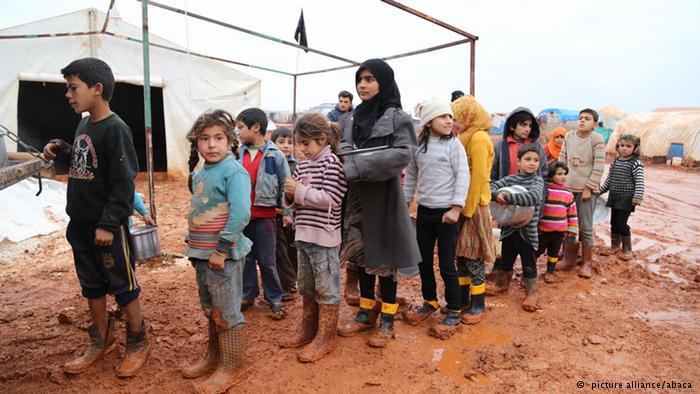 Without help from abroad, many people in Syria would not be able to survive. These children are patiently waiting for food parcels at a tent city set up in Idlib 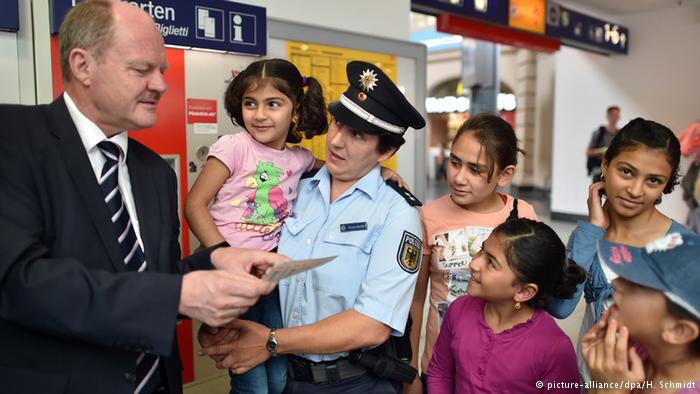 Buying tickets for local public transport is just one of the many things newcomers to Germany have to learn. Here, the minister of transport for Saxony-Anhalt, Thomas Webel, gives refugee children a lesson in how to use a ticket machine 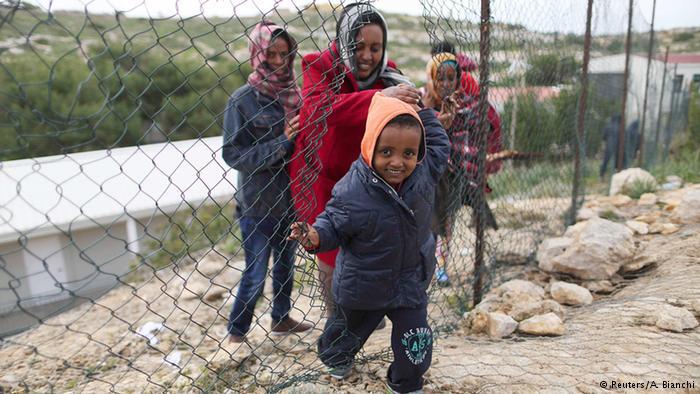 The International Organisation for Migration counts more than 121,000 people as having crossed the Mediterranean from Africa to Italy in unseaworthy boats so far this year. More than 2,600 have died in the attempt. Most of those who make it want to travel further north. For this child and his family, the refugee camp on the Italian island of Lampedusa is probably only a transit station 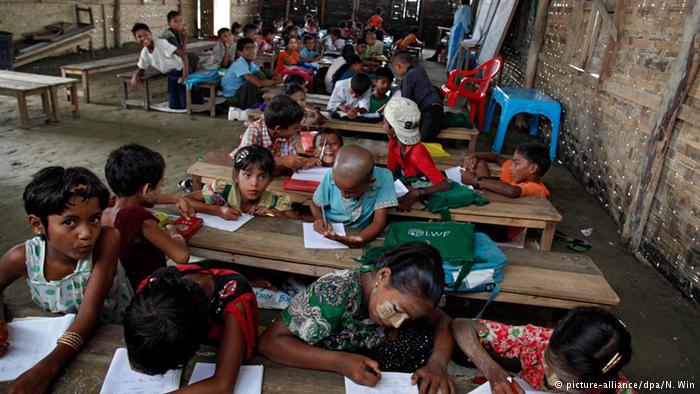 Going to school provides a little diversion from the otherwise dreary everyday life at Thet Kel Pyin refugee camp in Myanmar. Thousands of members of the Rohingya Muslim minority have been driven from their villages. They have fled to other parts of the Southeast Asian country or abroad 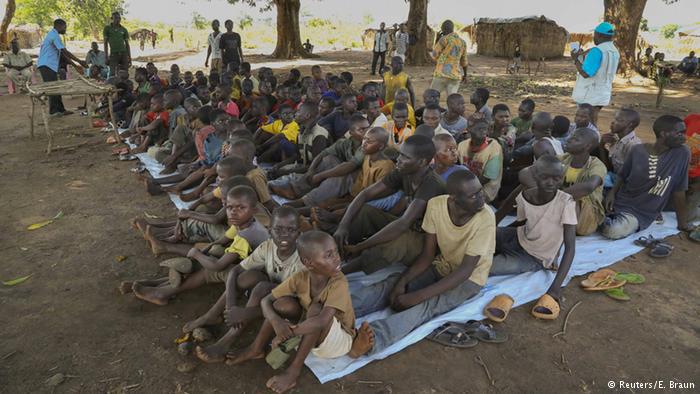 In many conflicts in African nations, children have been forced to fight. It's only rarely that children and adolescents are freed from the clutches of militias, such as here in the Central African Republic 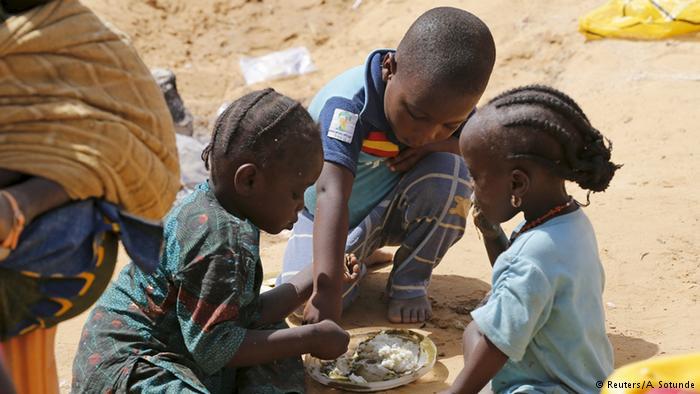 How can we move past these preconceptions?

Friese: It′s precisely this question that my book poses. It′s not a book of recipes; there′s no right and wrong. To address the subject at all and make some people reflect on it is the first step.

Sports or casting shows such as Germany′s Idol are indeed much further in terms of integration than everyday life within the country. We also have to become more flexible, more informal institutionally and get to grips with over-bureaucratisation.

Ultimately, hospitality has an impact on life as a whole. It is all about how we deal with each other ethically and politically and how we want to live.

Translated from the German by Jonathan Uhlaner

Cultural and social anthropologist and Professor of Intercultural Communication at the Chemnitz Technical University, Heidrun Friese has conducted field research on refugee movement in Lampedusa and Tunisia. In her book "Fluchtlinge: Opfer – Bedrohung – Helden" (Refugees: Victims – Threat – Heroes), she discusses the images we have of refugees.

At nearly 92, Juergen Habermas is still advocating for a robust and transparent civil society. Now Germany's greatest living intellectual has rejected a book award from the United ... END_OF_DOCUMENT_TOKEN_TO_BE_REPLACED

Philosopher Juergen Habermas was due to be awarded a major Arab prize in Abu Dhabi, but has turned it down following criticism. This decision torpedoes Arab efforts at a ... END_OF_DOCUMENT_TOKEN_TO_BE_REPLACED

Violent and racist crimes are on the up in Germany, according to official statistics on politically motivated crimes. Crimes by right-wing extremists hit their highest levels ... END_OF_DOCUMENT_TOKEN_TO_BE_REPLACED

In his book "Ground Zero: 9/11 und die Geburt der Gegenwart" (Ground Zero: 9/11 and the Birth of the Present) Islamic scholar Stefan Weidner analyses the consequences of the ... END_OF_DOCUMENT_TOKEN_TO_BE_REPLACED

Among Muslims, the image of women as "cossetted hijab-wearing princesses" is frequently invoked. But Muslim women have long wanted to be more. In her essay, Karoline Roscher- ... END_OF_DOCUMENT_TOKEN_TO_BE_REPLACED

The USA and NATO plan to withdraw from Afghanistan by September. The operation is risky, the outcome uncertain. Many Afghans fear civil war. The quake on the Hindu Kush will also ... END_OF_DOCUMENT_TOKEN_TO_BE_REPLACED
Author:
Sarah Kanning
Date:
Mail:
Send via mail

END_OF_DOCUMENT_TOKEN_TO_BE_REPLACED
Social media
and networks
Subscribe to our
newsletter