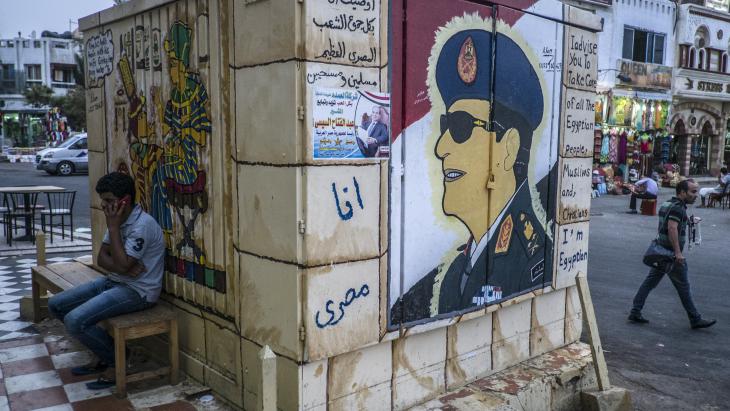 The role of Egypt′s armed forces
A military empire

After the Arab spring, the Egyptian military gained unprecedented influence. Able to count on the financial support of several Gulf monarchies, it maintains tight control of the political arena and the Egyptian economy. By Ingy Salama

President Abdul Fattah al-Sisi′s asserts that the share of military-owned enterprises does not exceed two percent of the Egyptian GDP today, but the figure seems too low if one considers the military′s many privileges. Precise figures, however, are hard to come by. The military is a ″black box″, with little information given about its hierarchy, budget and impacts on public life. According to ″Law 313″, any news about the armed forces can only be published following authorisation granted by the director of the military intelligence.

Traditionally, the armed forces in Egypt are a source of national pride among Egyptians: in 1952, a group of military officers under the leadership of Gamal Abdel Nasser – known as the ″Free Officers″ – overthrew the king and established the republic. Ever since, the armed forces have seen themselves as guardians and leaders of national development.

During his presidency, Nasser (1956-1970) nationalised several enterprises and laid the ground for industrialisation under the custody of the military. The construction of the High Dam at Assuan and the nationalisation of the Suez Canal were vivid examples of the emerging role of the military in domestic politics and economy.

All power to the military

Nasser was succeeded by Anwar el-Sadat (1970-1981), who invited foreign investors in an open-door policy. He reduced the number of military officers in key positions, but nonetheless ensured that the armed forces kept a privileged role in economic affairs. More military-controlled enterprises were established. The idea was that they would provide the armed forces as well as domestic markets with affordable goods. 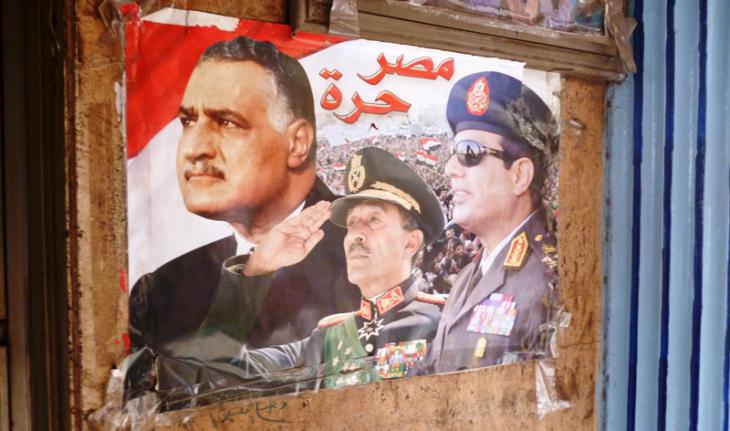 Historical continuity? Announcing his candidature for the presidency in 2014, Sisi still wore his army uniform. Only subsequently did he retire from the military to run as a civilian

Following Sadat′s assassination in 1981, Hosni Mubarak became president. He too was a general and he preserved the military′s role as a leading institution in political and economic life. Mubarak liked to appoint retired military generals in key administrative positions. In 1986, his government exempted the imports of the Ministry of Defence and the Ministry of State for Military Production from taxation. And in 1997, Mubarak issued a decree that gave the military the right to manage all undeveloped agricultural land.

As before, expanding the military′s role in business was considered to be socially responsible because markets would be provided with goods at reasonable prices. Indeed, the military sometimes interfered to alleviate people′s suffering. In 2008, for instance, when there was a bread shortage, Mubarak called on the armed forces to increase production in military bakeries.

The upheaval of 2011 initiated another phase in the militarisation of Egypt. Huge demonstrations demanded ″bread, freedom and social justice″. President Mubarak resigned and the Supreme Council of the Armed Forces (SCAF), a group of top military leaders, took power.

The police withdrew from the streets and people welcomed the soldiers who were deployed visibly in Cairo and other places. While the police were considered to be corrupt servants of the discredited regime, the armed forces were celebrated as guardians of stability. The media, moreover, reported that the military was lending the government substantial amounts of money in order to sustain the economy. 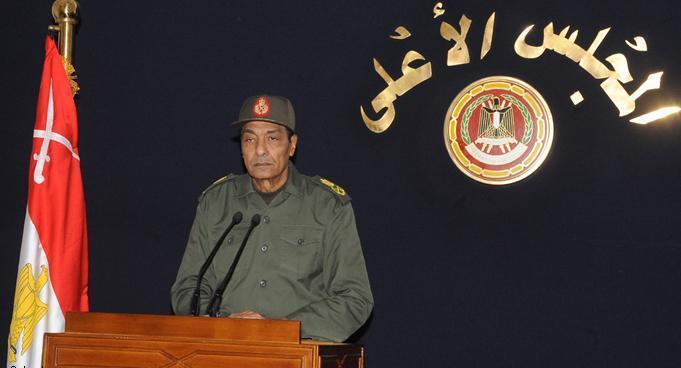 The hour of the hawks: the upheaval of 2011 initiated another phase in the militarisation of Egypt. Huge demonstrations demanded “bread, freedom and social justice”. President Mubarak resigned and the Supreme Council of the Armed Forces (SCAF), a group of top military leaders, took power

At the same time, the military refuted any criticism of its business empire. General Mahmoud Nasr, speaking on behalf of the defence ministry, declared in 2012 that the military would ″never surrender the military-controlled projects to any other authority″. In his view, the projects were not state-owned assets but resulted ″from the sweat of the Ministry of Defence and its own special projects″.

During the Arab spring, labour unrest rocked Egypt. Sit-ins and strikes were common. The SCAF quelled these strikes. Protesters were dispersed and many were arrested.

In 2012, Mohammed Morsi of the Muslim Brothers, who had long been suppressed, was elected president. Nasser had outlawed them, claiming they were involved in an assassination attempt in 1954. The stance of Sadat and Mubarak was the same. Many Muslims Brothers were imprisoned.

Stiff headwind for the Muslim Brotherhood

In attempted co-optation, the new constitution granted the military legal immunity and protected it from public scrutiny. Morsi′s relationship with the military soon became strained, however, when he announced plans to develop the Suez Canal corridor with the intention of turning it into a lucrative industrial area in partnership with India without consulting the Ministry of Defence. For Egypt′s military, the Suez Canal was always of major business interest. It controls the Canal and, as a result, enjoys considerable political influence and financial clout. Accordingly, the armed forces rejected Morsi′s plans.

In 2013, Morsi was toppled in a bloody military coup and General Abdul Fattah al-Sisi rose to power as the head of a military junta. Hundreds of Muslim Brothers were killed. Announcing his candidature for the presidency in 2014, Sisi still wore his army uniform. Only later did he retire from the military to run as a civilian. 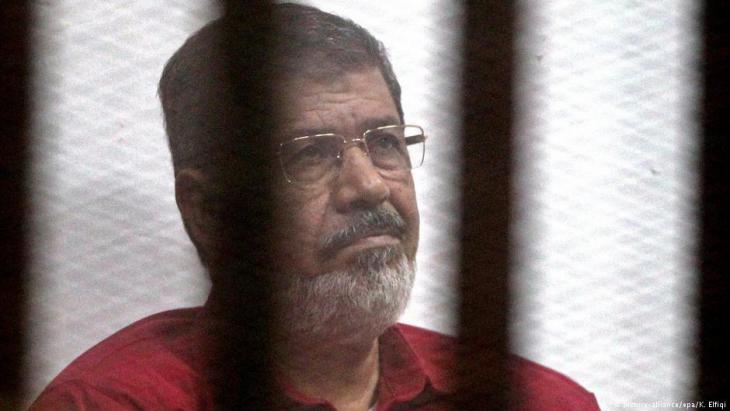 Ditched by the military and still under arrest: Morsi was ousted in response to mass protests – one reason many Egyptians supported Sisi′s tough stance against the Muslim Brotherhood. Last December, in a new case, a court in Cairo sentenced Morsi to three years in prison for insulting the justice system

He won the subsequent election, but the Muslim Brothers, who had won previous Egyptian elections, were barred. On the other hand, Morsi had become increasingly unpopular because he did not alleviate the hardships people were facing, but was seen to subordinate the state to his faith-based organisation.

Morsi was ousted in response to mass protests – one reason many Egyptians support Sisi′s tough stance against the Muslim Brotherhood. The media frames it as the military siding with the people.

Dependent on the Gulf states

Today, Sisi′s government depends on financial assistance from Gulf countries. The influence of the military has kept growing under his rule. For example, Sisi is championing two mega-projects with direct military involvement: the expansion of the Suez Canal and the construction of the new capital city. In 2015, his government allowed officers from the military, police and intelligence service to start private security agencies. At the same time, military-owned enterprises remain active in all economic sectors.

Despite the regime′s apparent tight control of the country, there seem to be clashes in the deep state. Sisi has been purging the intelligence service, so more than 100 officers have been expelled from it. In mid-January, Sisi dismissed the head of the intelligence service and made his chief of staff, Major General Abbas Kamel, its interim leader.

In the meantime, discontent is growing in other state bodies. Sisi has been publicly criticised by several military leaders for handing over two islands in the Red Sea to Saudi Arabia and renouncing Egypt′s claim to them.

Lieutenant General Ahmad Shafik, moreover, tweeted a strongly worded statement against Sisi when Egypt failed to stop Ethiopia′s Renaissance Dam upstream on the Nile. Generally speaking, however, public criticism of the regime has become rare. Egypt′s media are not free.

Ingy Salama is an Egyptian journalist and media specialist. She is based in Germany.

Despite Syria's lengthy civil war, dictator Bashar al-Assad is now being courted by many governments in the Middle East as if nothing ever happened. The reasons for this vary. By ... END_OF_DOCUMENT_TOKEN_TO_BE_REPLACED

With authoritarianism once more gaining ground in the Middle East and North Africa, the European Council on Foreign Relations explores how European diplomats can be more effective ... END_OF_DOCUMENT_TOKEN_TO_BE_REPLACED

Abdul Fattah al-Sisi's National Human Rights Strategy smacks of the containment and sabotage tactics adopted by counter-revolutionaries during Egypt's 2011 revolution and its ... END_OF_DOCUMENT_TOKEN_TO_BE_REPLACED

Sudan is the exception to the rule in the United Arab Emirates’ counter-revolutionary playbook, writes James M. Dorsey. In contrast to Egypt or Yemen, where it went out of its way ... END_OF_DOCUMENT_TOKEN_TO_BE_REPLACED

Racism exists in the Arab world. People with dark skin are discriminated against and often see their rights curtailed. Activists have had enough of such treatment and are starting ... END_OF_DOCUMENT_TOKEN_TO_BE_REPLACED

General Abdel Fattah Al-Burhan has declared a state of emergency in Sudan and dissolved the Sovereign Council, which was made up of military personnel and civilians. What will now ... END_OF_DOCUMENT_TOKEN_TO_BE_REPLACED
Author:
Ingy Salama
Date:
Mail:
Send via mail

END_OF_DOCUMENT_TOKEN_TO_BE_REPLACED
Social media
and networks
Subscribe to our
newsletter