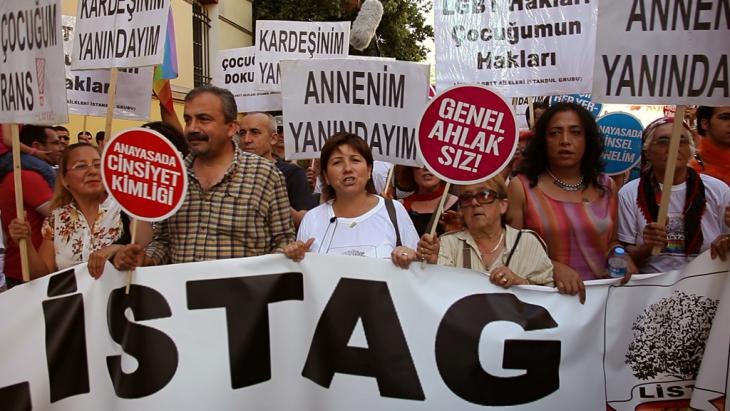 In the Turkish election campaign, all eyes are on the pro-Kurdish Peoples' Democratic Party (HDP). The party's success would fundamentally redraw the nation's political map. Within a short period of time, it has succeeded in gaining favour with an array of disadvantaged social groups. By Ceyda Nurtsch

In the HDP office in the Berlin district of Kreuzberg, election preparations are in full swing. Solidarity events are being planned, leaflets printed and distributed, information booths set up and trips organised so that Turkish citizens can cast their votes at the Turkish consulate.

In the midst of all this activity, Mehtap Erol hurries from one appointment to the next. Together with her colleague Erkin Erdogan, the dynamic Kurdish woman is the co-founder and spokesperson of the HDP platform in Berlin. For Erol, who originally hails from Dersim, the HDP is without doubt the party that best represents the interests of self-determined women.

"There needs to be a fundamental rethink in Turkey concerning the regard and treatment of women," says Erol. In her view, the biggest problems are the frequent cases of rape and a legal situation that repeatedly allows for more lenient sentencing.

But as she sees it, this is only the symptom of a much more profound problem. "It is a question of awareness and mindset. The prevailing mood is this macho attitude that allowed the former Prime Minister Erdogan to tell me how many children I should have," she says. She is convinced that women who want to make their own decisions about their lives and who have the courage to resist existing discrimination in everyday life will feel very much at home in the HDP.

The popularity of the HDP among women 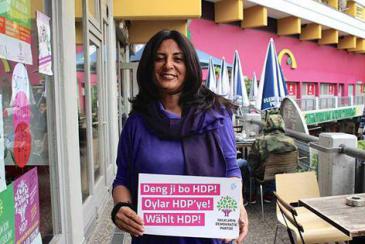 Critical of patriarchal tutelage and conservative Islamic values: political activist Mehtap Erol (pictured here) will be supporting the HDP in the upcoming general election in Turkey and hoping for an end to the years of AKP dominance over state and society

The political participation of women is indeed a significant aspect of the manifesto of the HDP, which describes itself in its charter among other things as the "party of all oppressed, exploited and marginalised people, women, workers, LGBTs, intellectuals, writers and academics".

A month before parliamentary elections, a video was shared on social networks showing an interview given by HDP Chairman Selahattin Demirtas to the channel Fox News. When the presenter said: "When you announced your manifesto, the HDP Vice Chair Figen Yuksekdag was standing next to you," Demirtas swiftly corrected him with the words: "No, I was next to her."

This was by no means a patronising gentlemanly remark – as evidenced by hard facts and figures. Almost 50 per cent of the party's parliamentary candidates are female, putting the HDP far ahead of the other parties in the field. That figure is just under 20 per cent for the Republican People's Party (CHP) and the Justice and Development Party (AKP), and only nine per cent in the case of the Nationalist Movement Party (MHP).

46-year-old Nurcan Gulbas is also going to vote for the HDP on 7 June. The self-employed single mother originally comes from Antakya. This major city on the Levantine coast in the south of Turkey is well known for its multi-denominational community of Assyrians, Christians, Alevis and Sunnis. It is also viewed as one of the traditional centres of Kemalism.

"My entire family usually votes CHP," says Gulbas. But this time, she adds, we'll be voting for the HDP. She's disappointed by the CHP, because she feels it has moved away from its left-wing roots. The views of Gulbas and her family are increasingly being shared by more and more former CHP voters, especially women and Alevis.

Nurcan Gulbas is herself an Alevi, a long-time activist in the left-wing movement and was detained as a political prisoner at Bayrampasa Prison, where she gave birth to her son Umut. She never felt any strong links to the left-wing Kurdish movement, she says. "I didn't see it as a social movement, but more as one that was focused on its own interests, on its ethnic identity," she says.

And there are indeed many people who mistrust the HDP because of its past and its close links to PKK leader Abdullah Ocalan even though they sympathise with many of the party's ideas and view it as the only alternative to the existing political system. But for Nurcan Gulbas in any case, the HDP has demonstrated greater openness than in the past. "I think the HDP is a very important societal project," says the 46-year-old.

She is particularly impressed with women in rural areas of Turkey, many of them not especially well educated, who take the streets to demonstrate for their rights, while many women in the larger urban centres are not nearly as active, she says.

Men and women together 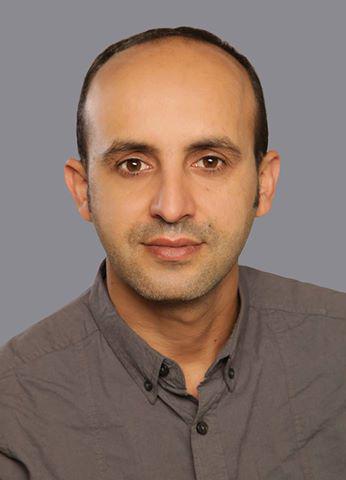 According to Zulfukar Cetin, the LGBT movement "is a movement with many identities – and in this respect, it has much in common with the HDP. This is because the party aims to bring together groups that have been marginalised by society and to demonstrate that these form the majority"

She has long stopped believing that there could be a change of mindset within the AKP. "When, for example, a commission for women's affairs is set up and most of the members are men, then I just can't take it seriously," explains Gulbas. But the HDP with its two leaders, a man and a woman, can serve as a model for other parties, she says. "It's always 'biz' ['we'] at the HDP, and that means men and women together."

Zulfukar Cetin, who is currently working on a Queer Studies project at the German Institute for International and Security Affairs in Berlin, knows that the HDP and its manifesto appeals to LGBTs. It must be said, however, that even the CHP is now becoming active in this area and fielding LGBT candidates.

The LGBT movement has a long tradition in Turkey. Even though it dates back to the 1970s, its first official public manifestation was the foundation of the rights organisation KAOS GL in the year 1994. It has been fighting for social visibility and recognition ever since.

The fact that the situation has improved slightly for the movement in recent years is not because of the AKP but in spite of it, says Cetin. "Statements from the family minister at the time, Fatma Sahin, that homosexuality was a disease and must be cured, resulted in a lively pro- and contra debate," he recalls. Also, the fact that there are now some 20 LGBT organisations across the country is partly due to a change in the law on associations – a result of EU negotiations with Turkey.

The LGBT movement does not limit itself to calling for the recognition of sexual identities, but also lobbies for social justice, women's rights and against racism. For example, for what was billed as the "Dignity March" of 2013, 50,000 people took to the streets under the slogan "For bread, justice and freedom".

"It is a movement with many identities – and in this respect, it has much in common with the HDP. This is because the party aims to bring together groups that have been marginalised by society and to demonstrate that these form the majority," explains Cetin. To this end, candidates such as the LGBT activist Baris Sulu, the headscarf-wearing Huda Kaya, the Roma Sedat Zimba and the Armenian Garo Paylan aim to show that the former Kurdish party with its project "the Great Humanity" – the central message of its election campaign – truly reflects the diversity of Turkish society. "With this concept," says Zulfukar Cetin, gauging the potential success of his party, "the HDP can clear the 10-per cent hurdle in the elections."

Home
Print
Newsletter
More on this topic
Parliamentary election in Turkey: An absolute majority hangs in the balanceInterview with Turkish politician Sirri Sureyya Onder: The solution to the Kurdish conflict as a yardstick for democracyKurdish in exile: The right to a mother tongueInterview with Turkish women's rights activist Selime Buyukgoze: A history of resistanceInterview with LGBT rights activist Arsham Parsi: ''Rights are never given; we have to fight for them''
Related Topics
Abdullah Ocalan, Democracy and civil society, Justice and Development party (Turkey), Kurds, Minorities in the Muslim world, Recep Tayyip Erdogan, Selahattin Demirtas, Turkish opposition, Women in the Islamic world, Women in Turkey
All Topics

As Syrian camps housing families of Islamic State fighters get more dangerous, there are calls to bring children out, even if the mothers don't want to go. The idea of separating ... END_OF_DOCUMENT_TOKEN_TO_BE_REPLACED

The Kurds are under attack from two sides: from Turkey, and from Iran. The situation in their territories in northern Iraq is becoming increasingly desperate. Birgit Svensson ... END_OF_DOCUMENT_TOKEN_TO_BE_REPLACED

Hundreds of porters, locally known as ‘kolbars’, cross the mountainous border between Iran and Iraqi Kurdistan all year round. With Iran’s economic crisis deepening, ever more ... END_OF_DOCUMENT_TOKEN_TO_BE_REPLACED

The Syrian conflict remains insoluble for the time being. Yet Europe could start managing it better. By reorganising humanitarian aid supplies, becoming more involved in the ... END_OF_DOCUMENT_TOKEN_TO_BE_REPLACED

Bachtyar Ali sends the hero of his latest novel – "Mein Onkel den der Wind mitnahm" – literally flying. Jamshid is so thin after his years as a political prisoner that a gust of ... END_OF_DOCUMENT_TOKEN_TO_BE_REPLACED

In this essay, renowned Lebanese journalist and writer Hazem Saghieh asks whether the Arab Levant, which stretches from Iraq in the east to Egypt in the west, will remain an ... END_OF_DOCUMENT_TOKEN_TO_BE_REPLACED
Author:
Ceyda Nurtsch
Date:
Mail:
Send via mail

END_OF_DOCUMENT_TOKEN_TO_BE_REPLACED
Social media
and networks
Subscribe to our
newsletter