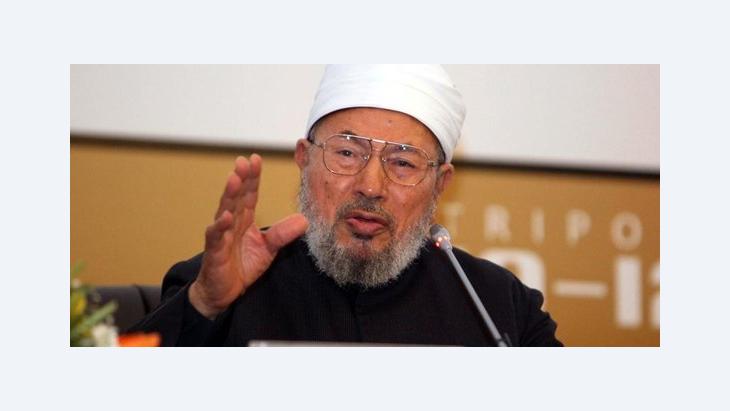 The Most Deadly Religious War of our Time

Preachers like the Sunni legal scholar Yusuf Al-Qaradawi or the Shia Ayatollah Ahmad Jannati are propagating sectarian hate and exacerbating the divide between Islam's two major denominations. In this essay, Stefan Buchen explains how the religious war they have helped to unleash within Islam is having a catastrophic effect on the Greater Middle East

Television channels will select the choicest of these sermons and will beam them into living rooms around the Islamic world, just as they did last year, only more obtrusive, more resounding and more hollow. Once again, staunch Sunnis will be told why Shia clerics, ayatollahs, are leading the community of the faithful astray. For their part, staunch Shias will once again be told why Muhammad ibn Abd al-Wahhab, the man who gave his name to Wahhabism, unleashed his erroneous doctrine on the world.

The religious-political establishments in Saudi Arabia and Iran will acknowledge with gratification the powerful, eloquent presence of their respective messages. Once again, no one will have given an inch in the battle for interpretational supremacy of their religion and the claim to political leadership in the Islamic world. 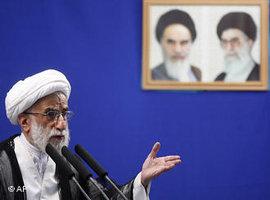 The hour of the religious ideologists: the Iranian cleric Ayatollah Ahmad Jannati, politician and a member of the Guardian Council, is one of the radical Islamic hardliners of the Islamic Republic

​​Intellectually, ethically and aesthetically, contemporary Islam will be a sorry sight to behold. Its loudest spokesmen will hone a culture that focuses on the other, a culture that is a breeding ground for mass murder, for the obliteration of villages and districts, for the most deadly religious war of our time. For years, the worst battlefields in the war have been Iraq, Pakistan, Yemen and Lebanon. Now, Syria has joined the fray and threatens to top anything that we have seen thus far.

The financial and ideological backers of this religious campaign are based in Riyadh and Tehran. They view their respective religious communities as compliant animals that will follow them blindly into the battle for power and influence in the Middle East without a second thought. Unfortunately, they are all too frequently proven right by the faithful themselves.

No one can deny any longer that there is a link between the Saudi-Iranian power struggle and the steadily intensifying antagonism between Sunnis and Shias throughout the entire Islamic world. This is all the more unfortunate considering that all of this initially seemed to be a passing mistake, an slip-up of history.

In 1980, when Saddam Hussein attacked the Islamic Republic of Iran, which had emerged from the revolution against the Shah, the situation was very different indeed: the West was providing military support to a secular president in order to weaken – if not to topple – the new anti-Western regime in Tehran. It was also a war between Persians and Arabs, who were now living out their arch-enmity on the battlefield.

For the international arms lobbies, the oil-rich warring parties meant that business boomed. Even though both sides – Iran in particular – made the most of religious associations to boost military mobilization ("the battle of Kerbela"), it wasn't ostensibly a religious war. Most of Saddam's soldiers were Shias, yet they spent eight years fighting against Shia Iran. 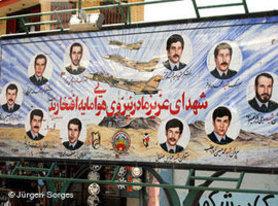 "Every day is Ashura; every grave is Kerbela": a poster in Shiraz commemorating officers of the Iranian air force who were killed during the Iran-Iraq War

​​Saudi Arabia was on Saddam's side and filled the coffers that paid for his arsenal with petrodollars. The kingdom feared the flames of revolutionary zeal being fanned by the Shia clergy. Khomeini could not be allowed to win the war; it was essential to put up some opposition to the universal claims of his revolution.

This is why the Saudi king gave himself the title "Guardian of the two holy places (Mecca and Medina)" and this is why the monarchy stepped up Wahhabi propaganda worldwide. In Afghanistan, mostly Sunni mujahedeen with Saudi backing proved that they too were willing to fight and die for Islam.

The Iran-Iraq War ended with a ceasefire; one million people had been killed. The antagonism between the Sunni Wahhabi kingdom and Shia Iran was at most a footnote in this conflict.

A disastrous overture to a religious war

Today, one gets the impression that this was in fact the disastrous overture to a religious war that has spread to a growing number of countries in the region and will last longer than the Thirty Years' War. Representatives of the two regional powers, Iran and Saudi Arabia, face each other in implacable opposition. The pro-Iranian Hezbollah and the pro-Saudi Hariri clan in Lebanon are archetypal.

The pro-Iranian, Shia-dominated government of Nouri al-Maliki and the Sunni parties in Iraq as well as the violent conflict in the Sunni-governed mainly Shia-populated kingdom of Bahrain are the most recent examples. 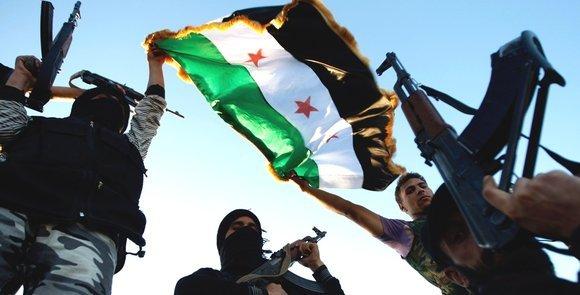 The question "Are you Sunni or Shia?" would have seemed ridiculous to many Muslims down through the ages, writes Stefan Buchen. But today, the uprising against the Assad regime in Syria is increasingly degenerating into a religious war between the Sunni rebels supported by Saudi Arabia and the Assad clan, which belongs to the Shia Alawite community

​​And now Syria, where the uprising against the Assad regime is increasingly degenerating into a religious war between Sunni rebels supported by Saudi Arabia and the Assad clan, which belongs to the Shia Alawite community that also dominates government troops.

Didn't the "Arab Spring" ever happen? Wasn't there a "Green Revolution" in Iran? Weren't there calls from the protesting people for the government to be toppled ("isqat an-nizam") and for the death of the dictator ("marg bar diktator")? Wasn't this supposed to be the start of an era of freedom, democracy and the rule of law in the Middle East, an era in which religion would at most play a role in the political process in the shape of political parties?

It seems as if this hope is being overshadowed and destroyed by the antagonism between Sunnis and Shias. The countries of North Africa, where the Arab Spring began, could degenerate into a huge Saudi hinterland as a result of this sad paradigm.

This is an astonishing development when one considers how vague or even syncretistic the denominational identities of many Muslims are in historical terms. The question "Are you Sunni or Shia?" would have seemed ridiculous – if not even completely incomprehensible – to many Muslims down through the ages. In some parts of "Sunni" Egypt, one encounters processions commemorating Shia martyr Hussein ibn Ali on the Day of Ashura. Does that mean that those taking part in the procession are Shia?

Who is the better Muslim?

When one considers what the actual cause of the growing antagonism between Sunnis and Shias is, this antagonism seems particularly unfortunate. Yes, there are different traditions and beliefs, differences in rites and in religious laws. Nevertheless, the fundamental difference can be traced back to a historical dispute about the succession of the Prophet Muhammad and consequently, to the question as to who the better Muslims were: Ali, Hussein and their descendents or Abu Bakr, Umar and Uthman? 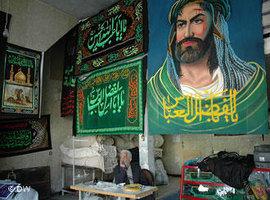 "No one can deny any longer that there is a link between the Saudi-Iranian power struggle and the steadily intensifying antagonism between Sunnis and Shias throughout the entire Islamic world." Pictured: devotionals commemorating the Shia martyr Hussein

​​Even the Arab writer Al-Jahiz (781–868) found the dispute incredibly tiresome. As far as he was concerned, if there was any point to the dispute at all it was that one could use it to study the rules of rhetoric and logical argumentation. To this end, Al-Jahiz created highly ironic fictitious disputes in some of his political writings, disputes in which the arguments of Ali's supporters ("ash-shiya'") are pitted against the arguments of Abu Bakr's supporters (who were not at the time known as "ahl as-sunnah" or "Sunnis").

He highlighted the contradictions the "Shias" became entangled in when they claimed that Ali's conversion to Islam as a child was the most noble conversion of all early Muslims. Nevertheless, neither of the parties in this literary disputation went as far as accusing the other side of heresy. What was important for Al-Jahiz was that rational thinking, spurred on by irony, was the dominant theme.

Today, neither of the two (very real) sides is capable of so much detachment – nor have they been for a long time. Yusuf Al-Qaradawi, Ayatollah Jannati and others of their ilk are the preachers of a sectarian hatred that dumbs things down. They make contemporary Islam seem entirely lacking in real spirituality. The intra-Islamic religious war that they have helped to unleash is having a devastating effect on the region, changing it in the long term.

In addition to the national borders drawn by the imperialist powers of the twentieth century, new borders are emerging: borders between districts of Baghdad, Beirut, Homs and Latakia, between Sanaa and Saada in Yemen. These borders may not appear on any map, but crossing them can still mean death.

Stefan Buchen is a journalist for the German broadcaster Norddeutscher Rundfunk. He frequently reports from the countries of the Middle East and North Africa. He studied Arab language and literature.

In his book "Ground Zero: 9/11 und die Geburt der Gegenwart" (Ground Zero: 9/11 and the Birth of the Present) Islamic scholar Stefan Weidner analyses the consequences of the ... END_OF_DOCUMENT_TOKEN_TO_BE_REPLACED

The rollout of coronavirus vaccines in the Middle East and North Africa is already taking place on a massive scale, with the United Arab Emirates leading the way. Nevertheless, ... END_OF_DOCUMENT_TOKEN_TO_BE_REPLACED

The Prophet Muhammad never executed anyone for apostasy, nor encouraged his followers to do so. Nor is criminalising sacrilege based on Islam’s main sacred text, the Koran. In ... END_OF_DOCUMENT_TOKEN_TO_BE_REPLACED

Surging coronavirus cases in many parts of the world have overshadowed the start of this year's Muslim holy month of Ramadan, with festivities once again curtailed by contagion ... END_OF_DOCUMENT_TOKEN_TO_BE_REPLACED

As Qatar prepares to host the 2022 FIFA World Cup, the country has come under fire for its treatment of migrant workers, with some nations calling for a boycott of the contest. ... END_OF_DOCUMENT_TOKEN_TO_BE_REPLACED

German Middle East analyst Guido Steinberg and television journalist Ulrich Tilgner have both published new books on the conflicts in the Middle East. Their analyses and their ... END_OF_DOCUMENT_TOKEN_TO_BE_REPLACED
Author:
Stefan Buchen
Date:
Mail:
Send via mail

END_OF_DOCUMENT_TOKEN_TO_BE_REPLACED
Social media
and networks
Subscribe to our
newsletter