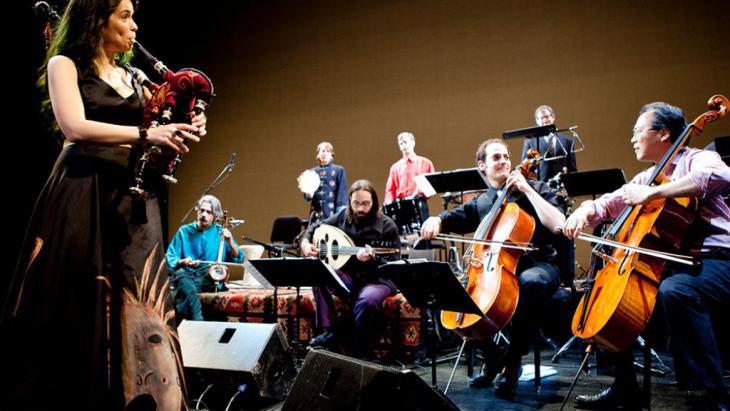 The Silk Road Ensemble
"The Music of Strangers": A quest for perfect harmony

The Silk Road Ensemble has been a leading force on the cross-cultural world music scene for almost twenty years. A new documentary – ″The Music of Strangers″ – tells the story of the project. By Marian Brehmer

The New York Times recently published a list of five outstanding examples of classical music with a political message. One of the pieces featured was "Silent City", a composition by the Iranian knee-violin (kamancheh) virtuoso Kayhan Kalhor, performed in the USA by the Silk Road Ensemble, a group Kalhor has been a member of for 20 years.

From the outset, the Silk Road Ensemble has presented music as a universal, immediately comprehensible language, an idea which for them is no mere platitude. The Ensemble is one of the most highly respected world music combos around and in recent years its musicians have become the exponents par excellence of the power of music to transcend cultural and political borders.

The project was the brainchild of cellist Yo-Yo Ma, whose idea it was to bring together world-class musicians from the great classical music traditions. The documentary "The Music of Strangers" reveals how he succeeded in transforming a diverse group of musicians into a world class ensemble.

Old footage traces the story, from Yo-Yo Ma's earliest performances as a child, to the first concerts by the Silk Road Ensemble. The extensively researched film gives audiences a privileged insight into the inner workings of this exceptional project. It all began in the year 2000, when Yo-Yo Ma invited sixty composers and musicians from the Silk Road countries, the cultural soul of Asia, to Massachusetts in the USA for them get to know one another. The journey that began there could well be described as a "search for perfect harmony" — and highly symbolic at a time when cultural misconceptions are all the rage.

Since that first meeting, the Silk Road Ensemble has recorded six albums and taken their characteristically zestful performing energy to 33 countries and an audience of around 20 million people around the world. This exuberance is in evidence in the film's lively opening scene where we find the Ensemble enjoying a high-spirited busking session on the streets of Istanbul. The documentary also succeeds very well in giving us insights into the lives of the individual musicians. Their stories are cleverly woven into the narrative by director Morgan Neville, revealing how tragic events like war and loss bring people together.

There is Kayhan Kalhor, for example, who moved to the U.S. after the Islamic Revolution, returning decades later to Iran to teach the younger generation to play the kamancheh. Following the protests by the Green Movement in Iran, he went back to the States, but had to leave his Iranian wife behind. Wu Man, the Ensemble's Chinese lute player, was one of the first young women to take music lessons after the country's Cultural Revolution and quickly became a prodigy on the ancient instrument known as the "pipa". In the early days, no one in America understood her music.

Among the younger members of the group is the Syrian clarinettist Kinan Azmeh, who in the film questions what his homeland means to him: "It is the place you feel you want to contribute to without having to justify it", he says, then talks of the pain of watching from afar as the country of his birth is torn apart.

This is a complex, multi-layered film which is never just about music. Cristina Pato, from Galicia in Spain, is another of the young musicians whose feisty gaita (bagpipe) playing adds a new, effervescent note to the Ensemble's sound. "The challenge in Galicia is the same as in the rest of the world – to keep your tradition alive," she says.

The Silk Road Ensemble is not interested in mere cultural tourism, in some watered-down imitation of old music traditions. Their search is for a sound that brings together their disparate musical cultures, while at the same time doing justice to the unique qualities of the Ensemble members — a balancing act that demands a great deal of empathy from the musicians, each of whom contributes their own musical influences to the sound of the Ensemble, thus giving their musical tradition the international audience that can help preserve it.

Innovation is about survival. "Unless a tradition keeps evolving it naturally becomes smaller and smaller," says Yo-Yo Ma in the film. The thoughts of the Ensemble's founder run through the "The Music of Strangers" like a common thread, complemented by camera shots of different cultures accompanied by the music of the Ensemble.

Despite being held in regard as a model for democracy and international understanding, the Ensemble has had its share of political problems. In the wake of 9/11, in particular, Yo-Yo Ma felt the Ensemble had a particular obligation to take a stance against prejudice and racism — musicians from the Islamic world are a very prominent part of the Silk Road Ensemble after all.

Another political challenge came at the beginning of this year when it seemed likely that President Trump's ban on citizens from some Muslim majority countries entering the U.S. would make the Ensemble's work with musicians from those countries impossible for an indefinite period. Kinan Azmeh, who has lived in New York for 16 years, was actually prevented from entering the United States in February when Trump's first ban was introduced.

One thing is sure, however: a project like the Silk Road Ensemble will only be strengthened in its convictions by such policies. Now more than ever, there is a need for the kind of projects that build bridges and have the will to engage in the search for perfect harmony in our common humanity.

Home
Print
Newsletter
More on this topic
Interview with the Iranian virtuoso Kayhan Kalhor: For the love of improvisationInterview with Kinan Azmeh and Dima Orsho: "All we can do is sing and play our hearts out"Qantara's dossier "Musical Worlds"
Related Topics
Cinema, Dialogue of Cultures | Intercultural Dialogue, Iranian music, Musical worlds, Places of Dialogue
All Topics

Analyst Iyad El-Baghdadi examines the ongoing tensions between the United States and the two Gulf states – Saudi Arabia and the UAE – and their geopolitical implications in ... END_OF_DOCUMENT_TOKEN_TO_BE_REPLACED

From the Euphrates to the Mekong, dams that ensure one country's water supply risk leaving others parched. But shared water resources can be a source of peace as well as conflict ... END_OF_DOCUMENT_TOKEN_TO_BE_REPLACED

For over fifty years, British photographer Peter Sanders travelled across the Middle East and further afield, seeking out the saints of Islam. His work uncovers a little-known ... END_OF_DOCUMENT_TOKEN_TO_BE_REPLACED

Europe's double standard on refugees, exposed yet again by the war in Ukraine, is morally deaf and geopolitically dumb. Europe can only defend itself by persuading developing and ... END_OF_DOCUMENT_TOKEN_TO_BE_REPLACED
Author:
Marian Brehmer
Date:
Mail:
Send via mail

END_OF_DOCUMENT_TOKEN_TO_BE_REPLACED
Social media
and networks
Subscribe to our
newsletter