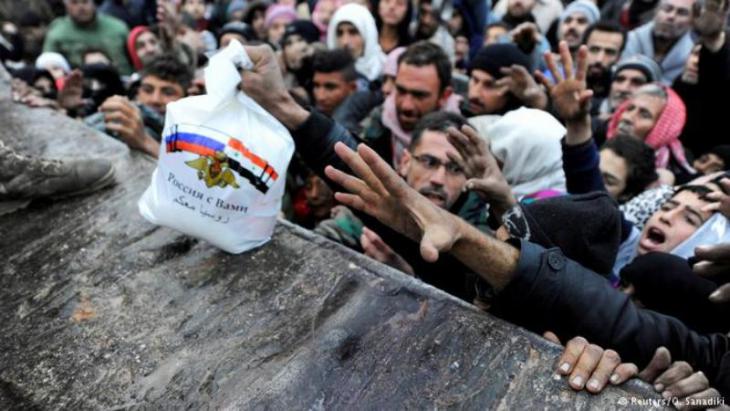 The situation post-Aleppo
An orphaned revolution

Russian′s bombing campaign in Syria has helped put an end to Aleppo′s civil democratic experiment, once a beacon of hope. What next? By Leila Al-Shami

As liberated Aleppo was falling, its horror broadcast by media activists in real time, thousands across the world took to the streets to protest about the humanitarian catastrophe unfolding. Whilst such solidarity is vital, some may bitterly complain that it is six years too late. The last pockets of grassroots democracy and creative resistance are now being crushed and the Syrian conflict mutating into a much darker and more terrifying phase.

An Assadist victory in Aleppo would not have been possible without Russian support. The regime was close to collapse in September 2015 when Putin intervened at the regime′s request. And it had been saved once before, by Iran, in 2013. The same pattern as Aleppo is being played out on dissenting communities elsewhere.

Crippling starvation sieges are enforced on the ground by an array of mainly foreign and sectarian Shia militias backed by Iran, while bombs and missiles from Assad′s and Russia′s planes fall like rain from the skies. In forced capitulation deals people are exiled from their homes, perhaps permanently.

IS was merely a pretext

Russia initially intervened on the pretext of fighting IS. Yet over 80% of Russian bombs have fallen nowhere near territory controlled by the terror group. Instead they fall on communities which have self-organised in democratic local councils, on schools and hospitals which doctors and teachers are desperately trying to keep functioning, on volunteer relief workers who risk their lives to pull terrified and bloodied children from rubble.

In the first 305 days of its intervention, Russian airstrikes killed 2,704 civilians, including 746 children. Both Syrian and international human rights and humanitarian organisations testify to Russia′s systematic and deliberate targeting of hospitals as a strategy of war. Russia′s intervention was intended to prevent the regime′s collapse and help it regain lost territory and it′s worked. 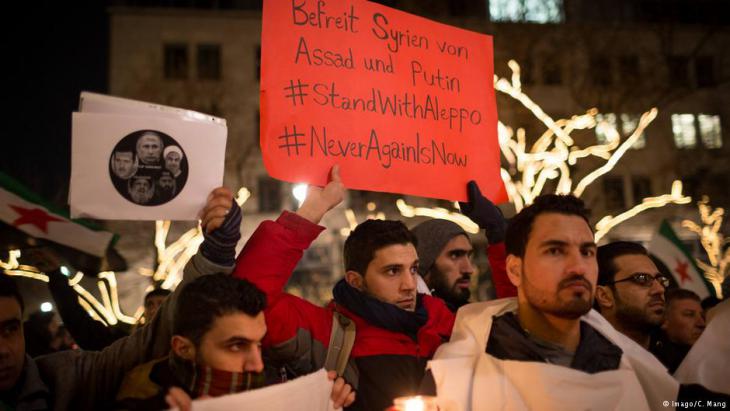 Plea for a sustained anti-war movement: "the Syrian people have paid a heavy price for their desire for freedom. They have been bombed by their own government, bombed by foreign governments and invaded by the world′s most crazed jihadists. We must stand with the Syrian people against all states participating in and perpetuating this conflict"

There′s a historical relationship between Russia and the Assad regime dating back to the Cold War. The Soviet Union sold weapons to the Syrian dictatorship and Syrian students often studied in Russia or other eastern bloc countries. A Soviet naval base was established in Tartus, Russia′s only base in the Mediterranean. Syria was a Russian asset and Putin has revitalised that relationship. Russian bombs keep Assad in power and Russia protects its client state at the Security Council in the same way the US protects Israel.

Challenge to US hegemony

Through its intervention in Syria, Russia has expanded and upgraded its naval base in Tartus to a permanent facility and established an air-base south of Latakia in 2015. Deals with the regime mean that Russian companies are set to benefit from lucrative oil and gas exploration contracts. It showcases its advanced weaponry and has increased its arms exports. But more importantly, through Syria Russia has successfully challenged US hegemony in the region.

It is Russia that is leading international negotiations, after Obama backed down following the chemical weapons deal. And Putin is also developing relationships with other regional authoritarians such as Turkey′s Erdogan and Egypt′s Sisi, with whom he has recently conducted joint military training. Putin has also strengthened relations with Israel, increasing economic cooperation, receiving military drones from Israel and sharing military intelligence on Syria.

Through its constant aerial bombardment, driving thousands from their homes and its backing of populist fascist groups in the west, Russia has also contributed to the destabilisation of Europe, already reeling from failed economic neoliberalism and austerity. Through its propaganda outlets such as Russia Today, it spreads a campaign of disinformation, not so much intended to convince as to confuse.

Some have claimed that Russia′s intervention cannot be imperialism if Russia′s military was invited by the Syrian regime. By the same argument, America′s intervention in Vietnam would not have been imperialism either, invited as it was by the South Vietnamese government. These commentators believe that sovereignty resides in states, not people and that legitimacy can be still be held by those who wage a campaign of extermination against those who peacefully protested their rule. 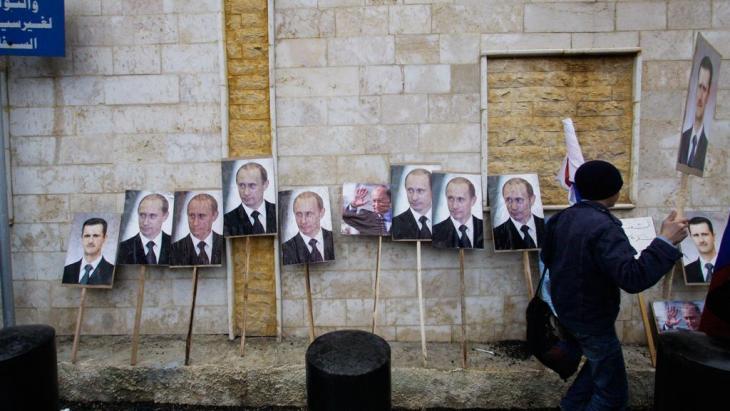 Putin to the rescue: "an Assadist victory in Aleppo would not have been possible without Russian support. The regime was close to collapse in September 2015 when Putin intervened at the regime′s request. And it had been saved once before, by Iran, in 2013. The same pattern as Aleppo is being played out on dissenting communities elsewhere," writes Al-Shami

Others will say that the rebels are also supported by regional and international imperialisms, backed by the US, Turkey and Gulf states. But the rebels have never received anywhere near the level of financial and military support the regime has received from its allies. Obama′s most significant intervention was to veto states providing air defence weaponry to the rebels. It was the rebels′ inability to respond to Assad′s overwhelming use of airpower which kept the balance of power in the regime′s favour, as it obliterated all possible alternatives to its rule.

With the abandonment of Aleppo, it′s now clear that Turkey is concerned primarily with crushing Kurdish autonomy in Syria′s north and Erdogan′s own authoritarian campaign against all dissent. And the reactionary Gulf states all have their own agendas, backing their respective factions, contributing to rebel disunity and infighting. Motivated primarily by their regional struggle for dominance with Iran, they have fanned the flames of sectarianism and extremism which the regime and its backers have so viciously provoked.

It does not appear that Trump will deviate significantly from Obama′s isolationist position. Like Obama, he will continue to see IS as the greatest threat to American interests. This doesn′t help Syrians who see the regime as the greatest obstacle to peace, which together with its allies has been responsible for over 90% of civilian deaths and is the primary cause of displacement.

Obama and Putin have co-ordinated for some time now in the “War on Terror”. Trump admires Putin and is likely to work with both him and Assad directly, paying even less lip-service to issues such as human rights, democracy or civilian protection. Never mind that Assad and Putin are attacking Free Army and Islamist militias that are actually fighting IS, as well as being the only defence for civilians.

Too many puppet masters?

It remains to be seen if tensions develop between Iran and Russia. Already in Aleppo′s evacuation deal negotiated between Russia and Turkey, Iran′s sectarian militias did not comply. And whilst Trump may grow closer to Putin, his close advisors are opposed to Iran and Obama′s nuclear deal. But Russia also knows that Assad cannot hold reconquered territory without Iranian-backed troops on the ground. Can there be more than one puppet master pulling the strings? 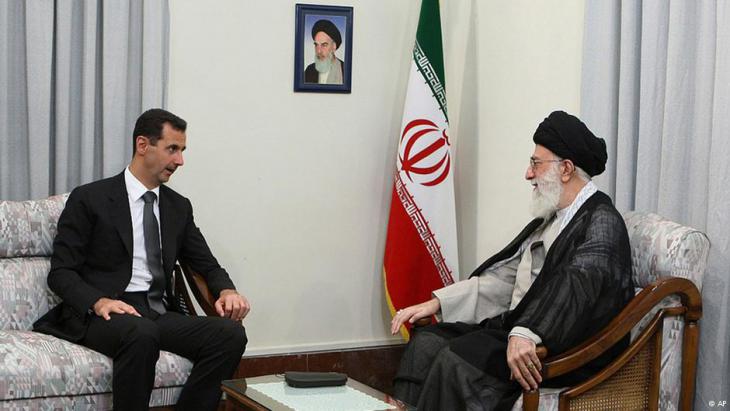 One thing is clear from Iran's proposals for solving the Syrian crisis: Bashar al-Assad should not be toppled. Whether Russia and Iran are willing to share influence should it come to the crunch, however, remains to be seen

The fall of Aleppo may be the final nail in the coffin for Syria′s orphaned revolution. An Assadist victory means the end of Aleppo′s civil democratic experiment, once a beacon of hope. It means the possible arrest of hundreds more civil society activists, medical and relief workers who will join the thousands already languishing in prison with little hope of release. The refugees and the displaced will never be able to return to their homes. Extremist groups will grow in strength, no longer subject to popular pressure. It will mean a return to the kingdom of fear.

The Syrian people have paid a heavy price for their desire for freedom. They have been bombed by their own government, bombed by foreign governments and invaded by the world′s most crazed jihadists. The regime has never shown a genuine willingness to go to negotiations. Assad is not prepared to give up or share his power. All ceasefires thus far have acted as preludes to increased slaughter and displacement, carried out with nothing more than “strong condemnations” from the international community. Assad, Russia and Iran believe in a military solution to this conflict.

It is now up to people, globally, to build a sustained anti-war movement that stands with the Syrian people against all states participating in and perpetuating this conflict.

Leila Al-Shami is a British-Syrian activist who has worked with the human rights movement in Syria and elsewhere in the region. She is co-author (with Robin Yassin-Kassab) of Burning Country: Syrians in Revolution and War.

Iranians do not want an Islam that interferes. They are fed up with a system that manipulates people with simple promises of salvation and anti-Western propaganda. Islamic ... END_OF_DOCUMENT_TOKEN_TO_BE_REPLACED

"The Voice of Dust and Ash" draws us into the life and times of Iranian maestro Mohammad Reza Shajarian with passion and joy, focusing on the man who stood, and still stands, for ... END_OF_DOCUMENT_TOKEN_TO_BE_REPLACED

The Kurds are under attack from two sides: from Turkey, and from Iran. The situation in their territories in northern Iraq is becoming increasingly desperate. Birgit Svensson ... END_OF_DOCUMENT_TOKEN_TO_BE_REPLACED

November 2022 sees the Arab world firmly in the spotlight with the COP27 in Egypt and the FIFA World Cup in Qatar. Public trust in MENA governments is weak, thanks to their ... END_OF_DOCUMENT_TOKEN_TO_BE_REPLACED

In Iran, two famous actresses, Hengameh Ghaziani and Katayoun Riahi, were arrested recently. These days anyone who shows solidarity with the protesters is a target to be silenced ... END_OF_DOCUMENT_TOKEN_TO_BE_REPLACED

With the current leadership of Iran quick to lay the blame for the Iran protests on Israel, the chances of harmonious relations between the two countries still seems remote. Yet, ... END_OF_DOCUMENT_TOKEN_TO_BE_REPLACED
Author:
Leila Al-Shami
Date:
Mail:
Send via mail

END_OF_DOCUMENT_TOKEN_TO_BE_REPLACED
Social media
and networks
Subscribe to our
newsletter