An open debate about the decade of terror in Algeria is virtually unthinkable. Nonetheless, many Algerians are trying to deal with their country's history in another way. In Oran, for instance, a socio-cultural project seeks to combine community work with the search for a new identity. By Beat Stauffer

An open debate about the decade of terror in Algeria is virtually unthinkable. Nonetheless, many Algerians are trying to deal with their country's tragic history in another way. In the western Algerian city of Oran, for instance, a socio-cultural project seeks to combine community work with the search for a new identity. Beat Stauffer reports

​​Sidi El Houari is the oldest part of the city of Oran. Over one thousand years ago, Andalusian mariners built a first settlement here. For centuries, Spaniards and Turks challenged each other's supremacy in the region. To this day, mighty fortifications bear witness to the strategic role played by Oran down through the years.

Today, however, Sidi El Houari is falling into decay. The facades of most of its houses are crumbling; entire streets are ready to collapse or have turned into slums.

In the middle of this impoverished district, a project offers unprecedented hope to the people of Oran. The Santé Sidi El Houari project is named after the district's first French military hospital.

Its founder and president is Dr Kamel Bereksi. Bereksi launched the project over 15 years ago and is to this day the driving force behind the eponymous association.

New life has recently been breathed into the walls of the old hospital, which was built on the foundations of a seventeenth-century Turkish bath. Teams of volunteers spent years removing rubble and waste from the building, which had fallen into a very dangerous state of repair, and restoring its fundamental structure.

In the early stages of the project, the initiators were faced with a major problem, namely that the knowledge of former construction techniques needed to restore the century-old building properly, had been all but lost in the years after Algeria gained independence.

To overcome this obstacle, volunteers were sent to France to learn the skills from appropriately qualified craftsmen. When they returned, they were able not only to apply their skills in a practical way to the renovation of the hospital, but also to subsequently pass on their knowledge to young people who had left school without any qualifications and were unemployed.

But these are not the only goals Bereksi is pursuing with the renovation of the hospital. Other aims go beyond the goals of a socio-cultural project. He hopes that "Santé Sidi El Houari" will encourage people in Oran to look at their city and its rich cultural heritage "in a different light". 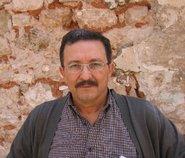 Dr Kamel Bereksi, president of "Santé Sidi El Houari", hopes that the project will encourage people in Oran to look at their city and its rich cultural heritage in a different light

​​The committed medical doctor would like people to show an interest in the preservation of the city, the protection of the environment, and the question of human rights. He hopes that in this way, he can foster a new "civic awareness", of which people claim there is too little in many parts of Algeria.

But there is another dimension to the "Santé Sidi El Houari" project. Put in simple terms, it is a question of Algerian identity.

Bereksi explains that layers dating from three different construction eras were uncovered during the renovation and repair of the old military hospital, namely the French, the Spanish, and the Turkish eras. This, he says, is evidence of the extent to which the history of Oran has been shaped and influenced by different peoples and cultures from around the Mediterranean.

However, in the years immediately following independence, Algeria chose to ignore its complex and varied history and sought to define itself as an exclusively Arab and Islamic country.

Bereksi says that this identity, which was imposed on the country from above, has for many years smothered the country like a lead blanket. However, the era has definitely drawn to a close; people instinctively sense that this definition of their identity had absolutely nothing to do with reality.

Bereksi hopes that increasing numbers of Algerian men and women will go in search of their "authentic roots" and, in doing so, find a new identity. He is convinced of the urgency and importance of such a process, especially in view of the fact that this confusion about identity is one of the reasons why many young Algerians are so disoriented.

To give young people in the district access to the hidden layers of "Algérianité", Bereksi and his supporters adopted a very special strategy: they form groups of young people between the ages of 12 and 25 whose task it is to pass on the knowledge they gain to their peers.

To this end, the members of these groups organise tours of the district, improvise scenes featuring figures from Algerian history, or draw images of historic monuments.

Many creative artists and intellectuals in Oran consider this way of getting people to make Algeria's tragic history their own to be essential for the development of Algerian society.

"An increasing number of people are realising that Algeria has not one, but several roots," says Mohamed Miliani, professor of English literature at the University of Oran. He is convinced that it is impossible to simply suppress or even erase any one part of this history. Whoever does this, he feels, is committing an "act of violence".

Miliani also supports the idea of Algerians finding a new self-image in this way. If this happens, Algeria will not close itself off from Europe in the future, but instead, says Miliani, be "diverse, multilingual, and multicultural".

It remains to be seen whether such views are well received elsewhere in Algeria or whether they can only flourish in the city of Oran.

Whatever happens, projects like "Santé Sidi El Houari" are evidence of a desire for a new beginning and are, as a result, a source of hope. And hope is one thing that this country, ravaged by terror for so many years, needs more than anything else.

Amnesty for Islamist Fighters in Algeria
Extension of Deadline Not Ruled Out
The end of August marked the expiration of the period during which radical Islamists in Algeria could lay down their weapons and take advantage of the offer of amnesty. Few fighters have responded to the offer to date. Bernhard Schmid reports on why