Striking Terror in the Horn of Africa

The bomb attacks it has carried out in Uganda and the US citizens it has succeeded in recruiting have propelled the Somali Islamist group Al-Shabab into the international headlines. The organisation in fact partly owes its existence to the intervention of Ethiopia and the US. By Alfred Hackensberger 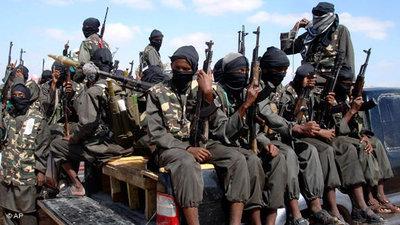 "We would like to be number one": But Al-Shabab is only number 41 on the US list of terrorist organisations

​​ If the Ugandan president, Yoweri Museveni, had his way, he would send 20,000 soldiers to Somalia to put paid once and for all to the Harakat Al-Shabab al-Mujahedin (The movement of youthful fighters). "We should take them on," he said in August during the 15th meeting of the African Union (AU) in Kampala. "This reactionary group has carried out aggression against our country. We have the right to self-defence."

The firm tone of his declaration followed attacks in the Ugandan capital on 11th July, in which two bombs exploded in a sport club while people were watching the Football World Cup final, and killed 76 people. Al-Shabab claimed responsibility.

"The Kampala bombs are just the beginning," said Al-Shabab's leader, Ahmed Abdi Godane, in a radio broadcast. He described them as revenge for atrocities which the Ugandan army had committed against the civilian population of Somalia. But the AU did not follow the Ugandan president's request, and only increased the number of its 6,000 peace-keeping troops in Somalia by 2,000.

"That's not a significant increase and will have virtually no effect," says Abdi Samatar, Somali-born Professor of Geography at the University of Minnesota. "The most it will do is to stiffen the resolve of Al-Shabab to fight against the occupation."

The "fight against the occupation" is of central significance for Al-Shabab. In an interview with the Arabic news channel Al-Jazeera, Sheikh Abu Mansur, one of its commanders, described it as a "God-given task". "We were attacked in our own country and had to defend ourselves," he explained. "If that makes us terrorists, we're proud of it." The US has put Al-Shabab on its terror list. "It's a shame we're only number 41," says Abu Mansur ironically. "We'd like to be number one." 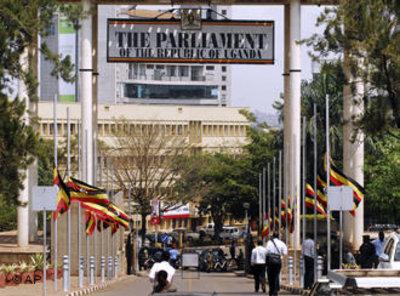 "The Kampala bombs are only the beginning," said Al-Shabab leader Ahmed Abdi Godane in a radio broadcast

​​ Al-Shabab began as a small group within the Islamic Courts Union (ICU), the movement which defeated the country's notorious warlords in 2006 and brought peace and something like security to the country for the first time in fifteen years. "In this period," remembers Samatar, "there were no more dangerous roadblocks in the capital Mogadishu. One could move freely. But that all changed with the Ethiopian invasion."

The troops from neighbouring Ethiopia occupied the capital in just two weeks in December 2006 and reinstalled the transitional government (TFG), which had called for their help. "That was all done with logistical and financial support from the USA," says Abdi Samatar. The US military also flew missions itself. Samatar believes there were just three, "against leading members of the ICU who had gone into hiding".

One of these missile attacks led to the death of Aden Hashi Ayro, a popular leader of the ICU. According to the US, he had been trained in Afghanistan and had contact to Al-Qaida.

The Ethiopian invasion was supposed to put a brake on the ICU's Islamism. The movement was indeed destroyed, but, in the event, this provoked only the emergence of a substantially more extreme Islamist group in its place.

"Ethiopia and the US created the right conditions for all these crazy guys like Al-Shabab," argues Samatar. "We told them beforehand that the ICU was a broad and effective alliance which one should take seriously if one wanted to ensure peace. But nobody wanted to believe us."

When the Ethiopian troops left, Al-Shabab was ready to exploit the power vacuum. Thanks to their effectively populist approach the Islamists managed to attract support, and soon conquered the south and the centre of the country as well as most of Mogadishu. Most of their weapons are said to have come from Ethiopia's arch-enemy, Eritrea.

​​ Within Mogadishu, the transitional government, on the other hand, only controls the parliament building, the airport and the harbour. Al-Shabab sees the AU peacekeepers as "Godless enemies". The transitional government is a "band of traitors who are collaborating with the enemy." Sheikh Abu Mansur says, "We are happy if we give their soldiers sleepless nights; each attack makes us stronger and is the will of God."

In January 2009, Sheikh Ahmed Sharif was voted in as president, but, for Al-Shabab, there is no question of entering into negotiations with him, even though he was once chairman of the ICU and in those days was attacked as a terrorist by the West. His appointment was seen as a chance to solve the conflict, but Abu Mansur insists, "The government of Sheikh Ahmed is illegitimate and corrupt. Only if they ask God for forgiveness and fight side-by-side with us can there be any reconciliation."

Rejected by the people

The aim of Al-Shabab is to free the whole of Somalia and to introduce Sharia law, which is already applied in the areas they control. Convicted wrongdoers are stoned, whipped or have their hands chopped off. Music, satellite television and football, whether live or televised, are all forbidden.

"Ethiopia and the US created the right conditions for all these crazy guys like Al-Shabab," says Professor Abdi Samatar of the University of Minnesota

​​ Religious sites belonging to other faith communities have been destroyed. This includes Christian churches, but it also applies to the graves of Sufi Sheikhs, who have been honoured in small mosques known as maqamat for hundreds of years. They are seen by Al-Shabab as an expression of polytheism.

Following Somalia, says Al-Shabab's Sheikh Ibrahim Al-Maqdasi, Islam should rule "from Alaska and Chile to South Africa, and from Japan to Russia". The aim is a world-wide Caliphate, such as the Ottoman Caliphate used to be until the 1920s.

"Al-Shabab won't get very far with this religious agenda," says Abdi Samatar of the University of Minnesota. "The Somali people sees it as a dead end, since they don't have anything to do with the movement's Islamist practice."

War in Somalia
Mogadishu between Plague and Cholera
For nearly 16 years Somalis have had no choice who governs their country. The invasion by Ethiopian troops has done nothing to change this. The responsibility lies above all with the failure of European diplomacy, says Marc Engelhardt

Somalia and Ethiopia
"Against the Islamists, Peace Is Impossible"
Somalia's government and Ethiopian troops drove out the Council of Islamic Courts late last year, but the government is now struggling with a growing insurgency. In this interview, Wolfgang Heinrich, expert on northeast African affairs, says the West used the wrong strategy

Civil War in Somalia
Worse Even Than Darfur
For the last year, the transitional government of Somalia has been involved in a bloody campaign of street fighting with insurgents. In spite of the many victims among the civilian population, no-one seems to be prepared to intervene. Marc Engelhardt reports

END_OF_DOCUMENT_TOKEN_TO_BE_REPLACED
Social media
and networks
Subscribe to our
newsletter