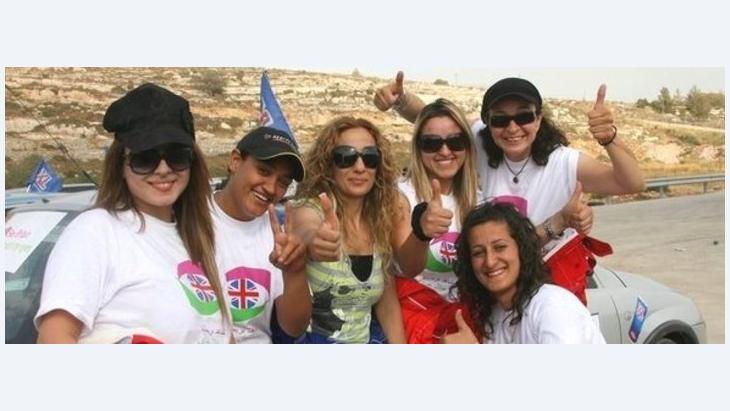 The Speed Sisters of Ramallah

﻿Palestinian women on the West Bank are increasingly able to determine their own lives. The "Speed Sisters", a group of women racing drivers, are ample proof of this. They have created quite a sensation in the process. Andreas Baum reports from Ramallah

Nur Dahud loves the sound of her motor. The 22-year-old lifts the bonnet of her souped up BMW and floors the gas pedal while in idle. It's the best way to hear what the motor's got. "A 320i with a three litre engine has real power," she says. "I actually wanted to convert it from an automatic to a manual gear shift, but all of my friends advised against it. They said that with the way I drive, it would kill me."

Nur Dahud is one of the "Speed Sisters" of Ramallah. Eight women – Muslims and Christians between the ages of 19 and 38 – have joined together to form the first women's racing car association in the history of Palestine. They are their country's official team. Races are held all over the West Bank – in Bethlehem, Ramallah, and Jenin, as well as in Jordan and Egypt. And it isn't unusual for them to outperform their male colleagues.

A parking lot on the edge of Ramallah serves as their training grounds. It lies directly along the wall separating Palestinian territories and is in the immediate proximity of an Israeli checkpoint. For Palestinians from the West Bank without a special permit, this is the end of the world.

The Israeli soldiers posted at the checkpoint and armed with assault rifles like watching the Speed Sisters, because the team training ends the monotony of guard duty. Sometimes, the soldiers applaud them from the guard tower. 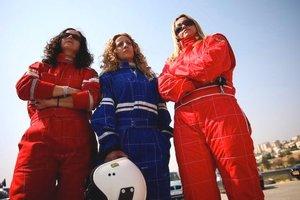 On the fast lane: Muslims and Christians have joined together to form the first women's racing car association in the history of Palestine

​​One of the most important driving manoeuvres that the women practice here is the so-called "doughnut". The driver speeds her BMW to almost 100 km/h and then abruptly swerves into a curve while pulling on the hand brakes. To a squealing sound, the vehicle skids in a circle, leaving skid marks on the grey asphalt in the form of a black doughnut. Every such spin takes a heavy toll on the tyres. The biggest problem for the Speed Sisters on the West Bank is replacement parts.

"Every time you do a skid manoeuvre right, you need to change your tyres," says Nur Dahud. All automobile parts have to be imported either from Germany, the USA, or Jordan. And the Israelis don't automatically allow Palestinians to import such goods."

Training sessions on the Israeli highway

Border formalities are not the only hurdles confronting the women. On account of the many checkpoints in the West Bank, there are hardly any stretches of road where they can properly train. However, Nur Dahud, as an Arab resident of East Jerusalem, enjoys the privilege of driving in Israel proper. There, on the highway between Jerusalem and Tel Aviv, she can push her car to its limits.

"Once, the Israeli police wanted to put me in jail for speeding. I was on the highway outside of Tel Aviv and I think I was going over 190 km/h. The police don't normally catch me, but I got caught in a traffic jam and had to brake. When I showed the policeman who stopped me my racing card, he let me go. 'All right,' he said, 'but please don't train here anymore.'"

The speed limit on Israeli highways is 110 km/h. 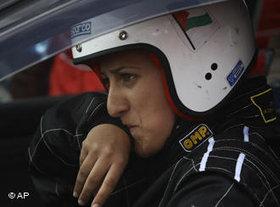 Driving since the age of ten: 19-year-olf Marah Sahalka is the youngest driver in the team

​​The youngest driver is Marah Sahalka, who is 19-years-old. She comes from Jenin, in the north of the West Bank, and studies business administration at Birzeit University. In order to drive to Ramallah, around 63 kilometres away, it takes her at least two hours because of the checkpoints. "I love cars," she says. "I've been driving since I've been a little girl. My mother has supported me. She is a driving instructor. One day, I was discovered by a racing organizer. 'Just take part in a rally,' he said."

Marah is waiting for a permit to import a Golf GTI from Germany. Her sponsor, a businessman from the West Bank, will be paying the bill. Until the vehicle arrives, she will continue racing in the Golf that her mother, Arab Sahalka, uses to teach driving students in Jenin. "Marah was born for this sport," she says. "I've always supported her, even before her father did. She has been driving since the age of ten."

In the beginning, many in the conservative city of Jenin were not particularly pleased with women participation in professional auto racing – especially in tight racing suits and helmets. Yet, when Marah began to win trophies, all doubts stopped. Today, she is supported by everyone, she says.

When the women racers want to see how well they fare against the competition, they usually participate in a speed test. Obstacle courses are a particular specialty of the 30-year-old Betty Sa'adi from Bethlehem. Weekdays, when she isn't taking part in a race, she works at an office job in a consulate in Ramallah.

"I break my finger nails whenever I race," she says laughing. "I had my nails done before the last speed test and two of them were broken. But it is better to break a fingernail than your bones, my mother says." 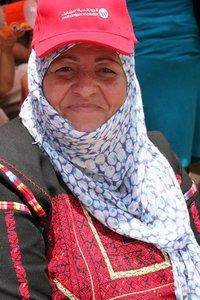 "Palestinian society has changed": mother of one of the female racers in traditional garb and with a sports cap

​​Betty comes from a racing family. Her father was a rally champion in Mexico and her brother won the 2009 West Bank Autocross Championship. Her father now owns a shopping mall in Bethlehem and is her most important sponsor. Her car alone cost 30,000 US dollars. That is why her father was depressed when she only came in at second place in the last speed test. The course took one minute and 15 seconds, just five seconds more than the winner, a young man from Ramallah. A stroke of bad luck!

"Whenever we're good, better than the fellows, then some of them are envious, especially those that we've beaten. But the others are glad to have us participate. They say that a race without girls is boring."

Suna Aweidah has been participating in car races for more than six years. She says that it isn't as difficult as it once was for Palestinian women to independently pursue their own interests. The young woman, who works for the United Nations Relief and Works Agency for Palestine Refugees, sees the acceptance enjoyed by the Speed Sisters as a sign of how Palestinian society has changed – and not only in sports, but in all aspects of life. "Palestinian women are increasingly able to prove their skills and talents however they choose."

Turkey's parliamentary and presidential elections are scheduled for June 2023. But they are already casting a shadow. While the opposition is calling for early elections, ... END_OF_DOCUMENT_TOKEN_TO_BE_REPLACED

Jewish voices are much more diverse than the public often sees. Jewish men and women who oppose the injustice of Israeli occupation in the West Bank deserve our respect and ... END_OF_DOCUMENT_TOKEN_TO_BE_REPLACED

By stage-managing his re-election in a poll widely dismissed as a farce, Syria's President Bashar al-Assad has killed two birds with one stone: he has forced his compatriots to ... END_OF_DOCUMENT_TOKEN_TO_BE_REPLACED

The Germans have a fragmented perception of the conflict between Israel and the Palestinians, and their discourse is dominated by certain catchphrases. All the while, there is a ... END_OF_DOCUMENT_TOKEN_TO_BE_REPLACED

An unusual organisation brings Jews and Muslims together to fight hate and promote dialogue. In the small central German city of Marburg they have been jointly calling for an end ... END_OF_DOCUMENT_TOKEN_TO_BE_REPLACED

Professor Timothy Brennan's "Places of Mind: A Life of Edward Said" is a detailed biography of one of the most important intellectuals of the twentieth century, taking us on a ... END_OF_DOCUMENT_TOKEN_TO_BE_REPLACED

Comments for this article: Emancipation in Racing Suits

Great Article! This would be a brilliant idea for a documentary or feature film. To bad that in Israeli media you only hear about the bad things Palastinians do. I really like the writing style of the article.

END_OF_DOCUMENT_TOKEN_TO_BE_REPLACED
Social media
and networks
Subscribe to our
newsletter