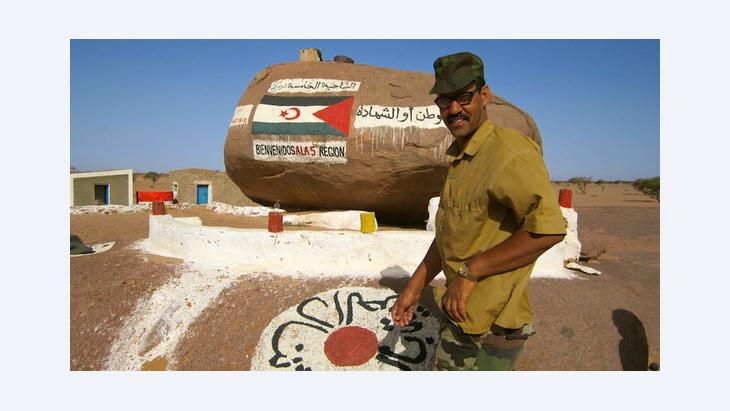 The Status of Western Sahara
A Forgotten Conflict

﻿The conflict over the status of Western Sahara has been simmering for four decades between the Kingdom of Morocco and the Sahrawi independence movement Frente Polisario. Efforts to find a solution to the deadlock appear to be paralysed – a fact partly due to a lack of international interest. By Annett Hellwig

﻿At a UN Security Council meeting in April 2013, it almost looked as though there might be some movement in the stalled conflict over "Africa's last colony", when delegates discussed the possibility of extending the mandate of the UN Mission for the Referendum in Western Sahara (MINURSO) by at least one component to monitor the human rights situation there.

MINURSO is the only UN mission in the world without a mandate to monitor the observance of human rights, and this cautious attempt to extend the existing mandate, which has remained unchanged since 1991, would in the end not have brought the process any closer the referendum on independence it set out to achieve.

But the attempt was nevertheless stymied by indignant protest from Morocco and rejection by France and Russia and therefore, a lasting solution to the conflict over the Western Sahara would still appear to be a remote prospect.

The roots of the conflict

The conflict began back in 1976 after the withdrawal of Spanish colonial power and the ensuing annexation of the area by Morocco and Mauritania. 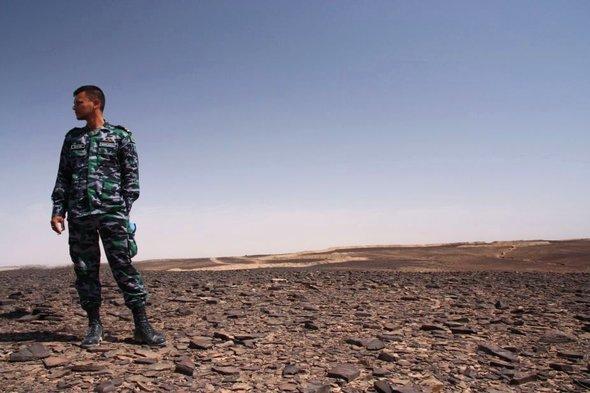 The West Sahara conflict is the continuation of the Western Sahara War between the Polisario and Morocco from 1975 till 1991. Since then, a UN peace mission has maintained a presence in the region, but the conflict keeps simmering

​​ The resulting clashes between Morocco and the Sahrawi liberation movement Frente Polisario forced hundreds of thousands of Sahrawis to flee to Algeria, where they are still living in refugee camps.

The militarised conflict was settled in 1991 by a UN peace plan, which envisaged the holding of a referendum on the independence of Western Sahara and despatched peacekeeping troops to monitor the ceasefire.

Most recently, preparations for this planned referendum have primarily faltered over the following question: If such a ballot does take place, who should be allowed to cast a vote? For a long time parties could not agree whether only the relatives of families who lived in the western Sahara during the era of Spanish colonial administration should have a vote, or all those who have lived in the region for a certain number of years.

In the meantime, the Moroccan government keenly exploited the time wasted over such questions by establishing favourable conditions in its "southern province". Thousands of Moroccans, and therefore potential voters, are being lured from the north by tax breaks and well-paid jobs to settle in Western Sahara and drive the economic development of the region. Morocco is investing huge sums in this endeavour – more than a billion dollars every year to be exact.

But it is not only the exploitation of resources – first and foremost phosphate and fishing grounds, and soon including oil – that is the main focus of this undertaking. Substantial sums of money are also being poured into the realisation of infrastructure projects – some of which are ludicrous – and the expansion of towns in Western Sahara. 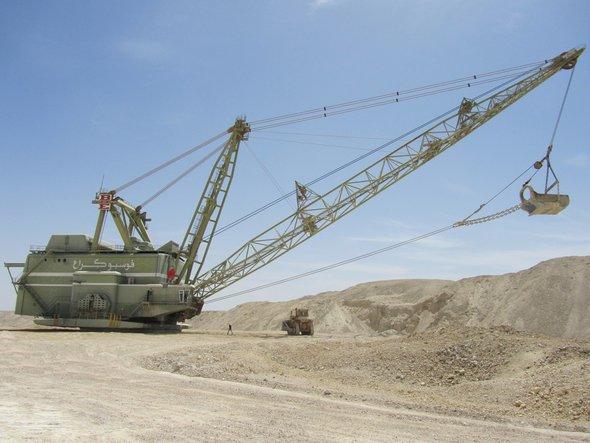 The Moroccan government used the peace talks stalemate by exploiting resources, investing in infrastructure projects and luring thousands of Moroccans to settle in Western Sahara. It all might pay off in case there really will be a referendum one day. Pictured: phosphate mine near Boukraa

​​Laayoune, the old provincial capital of the Spanish Sahara heaved from the desert sands in 1938, is today lined with wide boulevards and squares graced with fountains. The 200,000 residents of Laayoune, of whom just a fifth are Sahrawis, can also soon look forward to the construction of new theatres, sports facilities and shopping malls.

And indeed as a result this does mean that the Western Sahara region is better developed than "north Morocco"; the literacy rate here is also above the national average. But nevertheless, the native Sahrawis remain for the most part second-class citizens, disadvantaged and discriminated against by the authorities. Regular demonstrations against the occupation are often countered with violent resistance from what is now the Moroccan majority and for the Sahrawis involved, usually culminate in police violence and Draconian prison sentences.

Human rights organisations repeatedly denounce the catastrophic situation in Western Sahara internment camps and prisons, where systematic torture and maltreatment are routine. But this does not deter Rabat from persevering with its enthusiastic promotion of the economic advantages of locating business in the region, as well as its tourist attractions.

There are glossy travel guides to the "Moroccan Sahara" for example, folklore festivals with nomads and camel racing; and just last year, the region around Dakhla was even listed by the New York Times as one of the world's top travel destinations. Officially, Morocco is proud of the rich culture and tradition of its southern nationals.

In view of these two sides of the coin, and against a backdrop of intransigence on the part of the government in its standpoint that Western Sahara is an inextricable part of the Kingdom, this makes it difficult for international organisations such as the UN to mediate in the conflict. 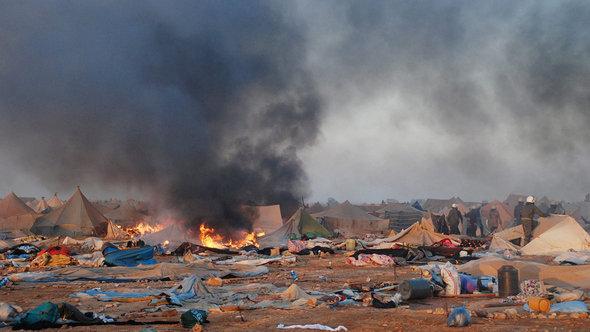 ​​Incidentally, preparation for a referendum has been off the agenda since 2004, because no agreement could be reached on the requisite framework. Since then, apart from monitoring the ceasefire, the UN has concentrated on making repeated appeals to the parties involved, supported by a UN special envoy in the role of mediator, to find a lasting solution among themselves.

The parties concerned are not just Morocco and the Frente Polisario, but above all also Algeria. The country supports the Sahrawis' demands for their own state and has offered sanctuary to their refugees for more than 30 years, but is also locked into historic rivalries with Morocco. This constellation casts the Sahrawis as de facto pawns between the two Maghreb nations, for whom the battle over Western Sahara is essentially about nothing less than attaining dominance of the entire region.

What remains is therefore the question of whether an independent Western Sahara could survive as such. There are two possible ways forward at this juncture – that of a transitional process chaperoned by the UN, or the scenario of a typical 'failed state', which is one feared by many. Morocco in particular likes to conjure up the prospect of the region becoming an Eldorado for arms smuggling and al Qaeda.

The government is fond of emphasising that up to now, and thanks only to the strength of its own army, Western Sahara is the only safe part of the region, while the Polisario on the other hand has been infiltrated by al Qaeda and brainwashed by Algeria. This line of argumentation is also repeatedly used in negotiations with European representatives to present Morocco as the guarantor of security and protector against terrorism in the region.

The nation is only too aware of its bridging function between Europe, the Arab region and Africa, and therefore sees no reason to alter its position in the Western Sahara conflict. Conversely on this point, European nations are failing to exert sufficient pressure on the Moroccan government to do something to improve the human rights situation within its sphere of influence and to demonstrate willingness to compromise with respect to Western Sahara.

Greater pressure from outside

As far as accusations of terrorist activity on the part of the Polisario and fears of an overspill of Islamist terror from Mali are concerned, it can be ascertained that there are no apparent links between these two sides. The Frente Polisario and the terrorists in Mali share neither goals nor opponents. 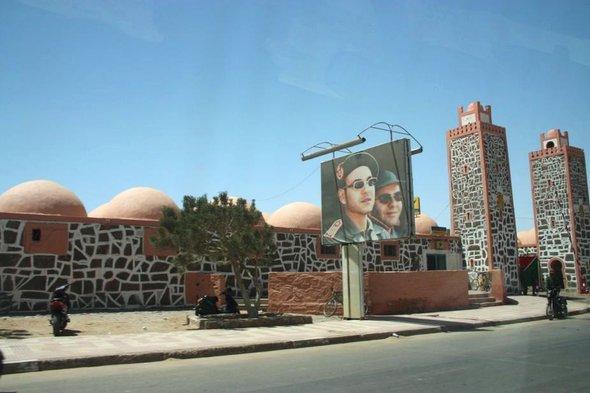 A guarantor of security and protector against terrorism in the region? Morocco likes to conjure up the prospect of the region becoming an Eldorado for arms smuggling and al Qaeda, thereby justifying its military presence there. Pictured: Royal Moroccan Army in Smara with a portrait of Morocco's King Mohammed VI in military gear

​​It is quite possible that individuals could infiltrate refugee camps close to the Algerian city of Tindouf and recruit frustrated youths to their cause, but on the whole this Moroccan argument is aimed at consigning its opponent to the terrorism corner thereby excluding it from the debate.

And so it does not appear that Algeria or Morocco, the parties that UN has essentially left to administer the conflict, will be moving the process on to any serious extent any time soon. All sides are presently investing great hope in the UN Secretary General's current special envoy Christopher Ross, who is accepted by all those involved and has a good chance of improving levels of cooperation.

But in the end, the Western Sahara conflict will not be solved on the basis of this dialogue alone. It requires heightened interest and greater pressure from outside, not least from the media, which are largely absent from the discussion. Without a broad-based international involvement there can be no lasting solution for Western Sahara.

Home
Print
Newsletter
More on this topic
Consequences of the Military Intervention in Mali: A Tinderbox SituationThe Crisis in the Western Sahara: The Forgotten Refugees of TindoufPhoto Essay: The Conflict in Western Sahara - The Eternal Wait
Related Topics
Western Sahara conflict
All Topics

How is one to convey the history of Islamic images of Muhammad freed from today’s polarised politics? What are the challenges and pinch points of this particular academic ... END_OF_DOCUMENT_TOKEN_TO_BE_REPLACED

A Tunisian farmer attaches a machine to a cow's udder and sets the pump whirring, but he only expects to fetch less than half the normal amount of milk amid soaring fodder prices END_OF_DOCUMENT_TOKEN_TO_BE_REPLACED

The book "The Invention of the Maghreb: between Africa and the Middle East" prompts us to review basic terminology. This includes terms that we use almost every day as if they are ... END_OF_DOCUMENT_TOKEN_TO_BE_REPLACED

The term "Tuareg" refers to tribes and nomads who speak dialects of Tuareg and live in Targa, an area in south-west Libya recently renamed Wadi Al-Hayat but previously known as ... END_OF_DOCUMENT_TOKEN_TO_BE_REPLACED

Where are the measures to deal with the looming challenges facing the Arab world? In this commentary, Marwan Muasher warns that the region is in grave danger of falling behind ... END_OF_DOCUMENT_TOKEN_TO_BE_REPLACED

Comments for this article: A Forgotten Conflict

I think UN should take care about the human rights situation there.

if there is any conflict between Sahararwis and UN

END_OF_DOCUMENT_TOKEN_TO_BE_REPLACED
Social media
and networks
Subscribe to our
newsletter