The Swat Peace Accord in Pakistan
"A Dangerous Precedence"

Judges trained in Islamic law began reviewing cases this week in a northwest Pakistani region where the government imposed religious rule to make peace with the Taliban. The deal is likely to encourage other groups to push for similar demands, says Pakistani jurist Zubair Masood, in this interview by Nusrat Sheikh

An armed supporter of the militant group 'Tehreek-e-Taliban Pakistan' guards thieves during their trial by Taliban on the outskirts of Matta, an area of Pakistan's Swat district

​​ Pakistan's government is facing national and international criticism with regard to her recent Peace Accord in Swat, a district, which has been suffering from unabated violence for the last one and a half years.

This Peace Accord has come about as a result of negotiations between the provincial government of the North-Western Frontier Province (NWFP), ruled by the secular Awami National Party (ANP), and the Islamist group Tanzeem Nifaz Shariat-e-Muhammadi (TNSM), which is acting as a 'peace broker' between the government and the militant outfit Tehreek-e-Taliban (TeT). According to this accord, a truce has been established in the restive Swat region, once known as a popular vacation resort with a flourishing tourism industry.

In return, the government has acceded to the TeT's and TNSM's demand to establish the Nizam-e-Adl Regulation, which stipulates the enforcement of shariah (Islamic Law) in this and adjacent areas.

At the background of huge losses on either side, how do you assess the current Swat peace accord?

Zubair Masood: The people in the Swat valley have welcomed the deal. Most have done so not on the merit of the agreement but more so in the hope that it will bring peace and tranquility. It is preceded by bombing and torching girls' schools and killing innocent people with suicide bombing. For those away from Swat, it amounts to surrendering to the Taliban, but for the people of Swat this deal brings hope that normalcy may return to the valley.

​​ In your view, will peace last in Swat?

Masood: Lasting peace in Swat is a distant possibility as it cannot be seen in an isolated context. Fazlullah, the leader of the militant Tehreek-e-Taliban (TeT), and Sufi Mohammad, leader of the Tanzeem Nifaz Shariate-Muhammadi (TNSM) and father-in-law of Fazlullah, cannot take independent decisions as they are dependent on Taliban and Arab elements in the rest of the tribal areas. The TNSM has acted as a peace broker between the government and the TeT. And those Taliban will not allow lasting peace in Swat as it is not in their interest.

In my view, neither the old judicial system has ever provided speedy justice to the people of Swat, nor will the new Nizam-e-Adl Regulation, which stipulates the enforcement of sharia in the Swat and adjacent area. Hence, the failure of the new judicial system will provide a pretext for the Taliban to resort to violence again.

Who does this peace deal benefit most and why?

First, the Pakistani Army was given a chance to save her face, which had neither the will nor the capacity to fight the Taliban; and secondly, the military establishment is still pursuing its policy of 'strategic depth' in Afghanistan and 'bleeding India with a thousand cuts'. 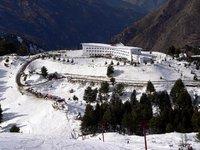 ​​Is the enforcement of shariah a new phenomenon in Pakistan, particularly in Swat?

Masood: Shariah has not been a new phenomenon for the people of Swat. Before the princely state of Swat joined Pakistan in the late sixties, people used to have two options for resolving their disputes, either through the riwaj (custom) or shariah. Mostly people would resort to riwaj as it was a speedy justice system.

After Swat had become part of Pakistan, the regular laws of Pakistan were extended to the area with the courts system. However, in the new arrangement, the element of speedy justice was lost. People got disillusioned with the new system.

In 1994, Maulana Sufi Mohammad started a movement called Tehrik-e-Nifaz-e-Shariat-e-Mohammadi (TNSM) for the enforcement of shariah. This movement turned into an armed struggle against the government. The Government of Benazir Bhutto had to implement a new regulation in which Sufi Mohammad's demand was accommodated.

The nomenclature of the district judge was replaced by qazi, who was supported by an aalim (religious scholar) with regard to the interpretation of the shariah. In 1999, yet another regulation was enforced. This time the religious scholars were removed from the system. Despite all this lip service to shariah, the basic problem of the people of Swat – speedy justice – was not properly addressed.

The present shariah regulation of 2009 is supposed to be an improvement upon the earlier regulations. The new aspect in it is that a time limit is given to the courts within which they are bound to decide the cases: four month for criminal and five months for civil disputes resolution. The Shariat Appellate Bench of the Federal Shariat Court of Pakistan has also been constituted, which shall hear appeals against the decisions of the courts of first instance. Decisions of the bench would be final and cannot be challenged, not even in the Supreme Court of Pakistan.

As a lawyer, how do you assess the compatibility of the so-called Nizam-e-Adl regulation with the constitution of Pakistan?

Masood: Well, the constitution of Pakistan itself has become a heap of contradictions after the extra-constitutional engineering by military generals in power throughout the history of Pakistan. It is no longer a consistent and coherent document.

With the process of "Islamisation" under General Zia-ul-Haq (1977–88), e.g. the introduction of a parallel Islamic judicial system and the Islamic Ideology Council, the present version of the Pakistani constitution is definitely not secular. Thus I don't see any incompatibility of 'Nizam-e-Adl' with the constitution – except where it takes away the jurisdiction of Supreme Court by declaring the Shariat Appellate Bench as the final court.

But the big question is: what is shariah? Who decides what shariah is? This is not clear in the said regulation. Ultimately, it will be the barrel of Maulana Fazlullah's gun which will decide what shariah is.

What impact will this peace deal have on the human rights situation in Swat and on other areas?

Masood: At present time, the right to life and liberty is paramount, and therefore, all other fundamental rights such as social, political and even economic rights are on the backburner. But, of course, the Taliban version of shariah violates basic rights of women, girls, minorities and any other dissenting men.

Further, this agreement sets a dangerous precedence for other groups. Just in the last two days, I have heard about further demands for the enforcement of shariah from various corners, including from Peshawar.

The Obama administration is in the process of re-formulating a new Afghanistan-Pakistan strategy. In your view, how should a new strategy look like?

For instance, it would make sense to take India as a stakeholder on board as well. If the influence of the Taliban is not contained in time, it will have dire consequences for NWFP and, hence, Pakistan and the world.

US Foreign Policy in Afghanistan
In Search of Moderate Taliban
It appears that President Obama's idea of entering into dialogue with so-called "moderate Taliban" has met with a surprisingly positive reaction. Although the idea was initially rejected categorically by those close to Mullah Omar, the Taliban would now appear to be ready to talk. Martin Gerner reports from Herat

Afghanistan
"The War Lords Must Be Marginalised"
Afghanistan has a new constitution, one which expressly defines it as a Muslim country. After years of civil war and fundamentalist tyranny, law and democracy are now meant to pave the way for a better future. Interview with Afghanistan expert Jochen Hippler

END_OF_DOCUMENT_TOKEN_TO_BE_REPLACED
Social media
and networks
Subscribe to our
newsletter