Countless cultural assets were destroyed by the Syrian Civil War. The Syrian Heritage Archive Project in Berlin contributes to preserving their memory with an exhibition showing what has been lost – and what remains. By Christina Kufner

There's a clear blue sky on Issam Hajjar's photo of Aleppo's famous Umayyad Mosque from 2011. "It was a clear January day and I was on my way to the old town to take pictures," the Syrian photographer recalls. The photograph shows the inner courtyard of the mosque bustling with people, the impressive minaret of the prayer house in the background.

Issam Hajjar has taken countless such pictures of buildings and archaeological sites, but also of daily life in the province. His photos are of great value today, as they preserve the memory of a country that no longer exists.

In some locations, there are only bombed-out ruins left. Different world heritage sites have been badly damaged or completely destroyed – such as the minaret of the Umayyad Mosque, which collapsed in April 2013 after heavy fighting in the city.

The photographer, who now lives in Berlin, has therefore donated some of these images to the "Syrian Heritage Archive Project", conducted in cooperation with the Museum of Islamic Art in Berlin and the German Archaeological Institute.

Countless cultural assets have been destroyed by the Syrian Civil War. The Syrian Heritage Archive Project in Berlin contributes to preserving their memory with an exhibition showing what has been lost — and what remains. By Christina Kufner 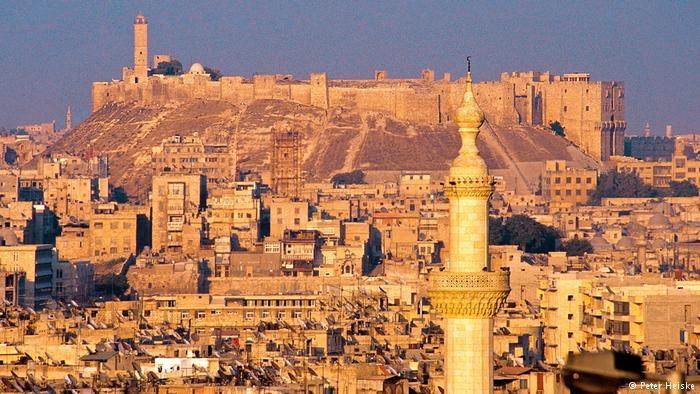 Aleppo before the war: a photo taken in 2001, when no-one suspected the suffering and destruction the city would experience barely a decade later. It shows Aleppo's citadel peacefully overlooking the Old Town bathed in a golden light. At the time, the minaret of the Great Mosque had just been scaffolded for renovation 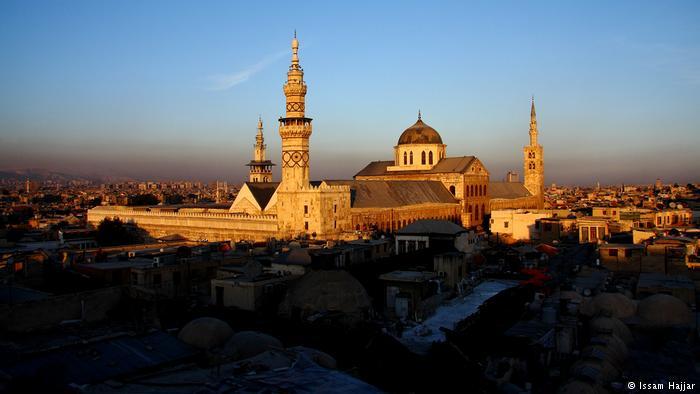 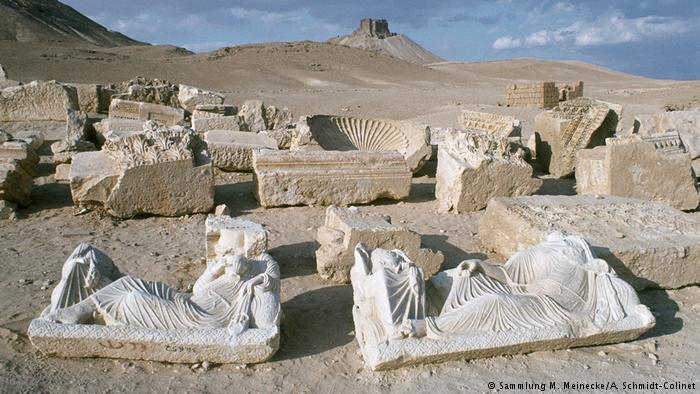 Palmyra's Valley of the Tombs: when the ancient cultural and trading city of Palmyra became a UNESCO World Cultural Heritage site in 1980, its primary temple became a major archaeological site. The reliefs and architectural elements pictured above are from a temple tomb excavated between 1981 and 1985 in a joint initiative presided over by the German Archaeological Institute and the Syrian Directorate of Antiquities 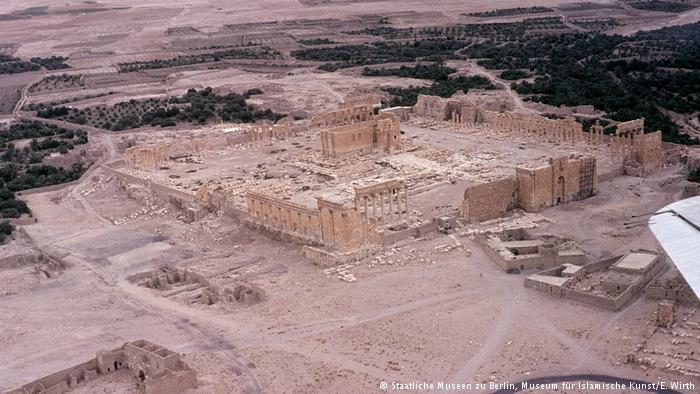 The ancient Temple of Baal: the more than 2,000-year-old temple that was consecrated in honour of the Mesopotamian god Baal was a highly preserved ruin in the oasis town of Palmyra before the war. However its central building – the cella – and its sanctuaries were blown up by Islamic State in 2015 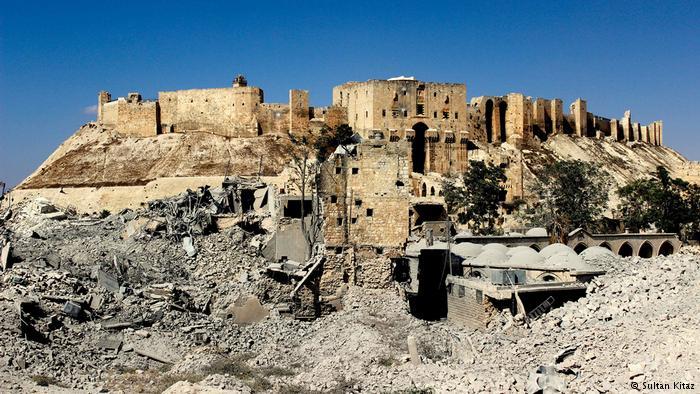 Rubble around the Citadel of Aleppo: the ancient Citadel of Aleppo, which rose to its peak during the 12th and 13th centuries, is one of the oldest fortresses in the world and has been a UNESCO World Heritage Site since 1986. The war destroyed the surroundings and parts of the citadel. In the meantime, however, it can be visited again 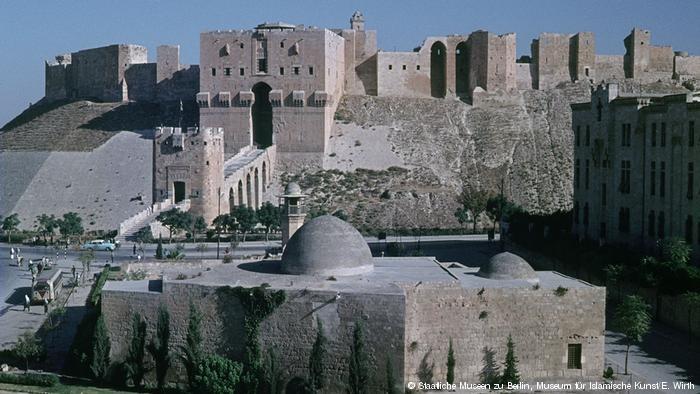 Former glory: this photo shows the intact surroundings of the celebrated citadel complex – with origins going back to the 3rd millenium BC – before the war. The mosque complex dating from the 13th century, which is located directly in front of the Citadel of Aleppo, was heavily damaged when the Syrian Army used it as a military base 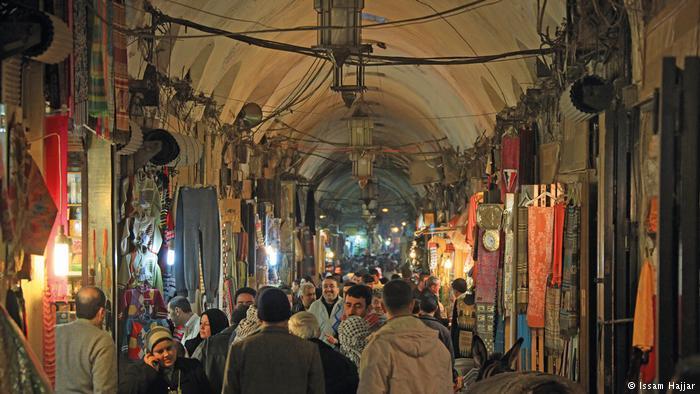 Aleppo's world-famous bazaar: with more than 1,000 small shops, Aleppo's old bazaar, or souk, was the heart of the storied Syrian city – the largest by population in the country before the civil war began. But the Syrian conflict destroyed much of the old city where the bazaar is located, and large parts of the labyrinthine structure remain devastated today 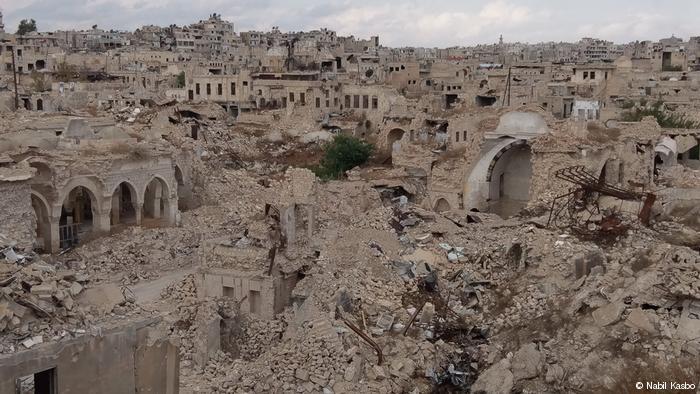 The ruins of the conflict: Aleppo has become a symbol of Syria's civil war. Large parts of the once flourishing metropolis, Syria's former economic powerhouse, are no longer recognisable. The large Waqf complex of the Abshir Pasha mosque (left), and the Behramiyah mosque (right) in the historic Al-Jdayde district suffered catastrophic damage during the conflict

Since 2013, German and Syrian researchers have been collecting photographs, films and reports documenting Syria's cultural and natural treasures before digitising them to create an archive. From old photos to archaeological research, all is systematically recorded and sorted.

"Over the past six years, we have collected an incredible volume of data," says Professor Stefan Weber of the Museum of Islamic Art in Berlin, who initiated the project six years ago. Around 340,000 documents have now been collected. It is the most comprehensive archive on Syria outside the country. "This is a unique treasure."

A selection of this archive is now on show at Berlin's Pergamon Museum, in the exhibition "The Cultural Landscape of Syria: Preservation and Archiving in Times of War." The show is organised in five different sections, covering the old towns of Damascus and Aleppo, Palmyra and Raqqa, as well as the so-called Dead Cities – abandoned settlements from the late Roman and early Byzantine times.

Pairs of photographs showing a same location before and after the Syrian Civil War are particularly moving. A lively ancient bazaar street in Aleppo, for example, is reduced to a pile of rubble in the accompanying picture. Nevertheless, the emphasis of the exhibition is not material losses; it rather shows what Syria still possesses – an outstanding, millennia-old cultural heritage.

A template for reconstruction

"It's also about making that clear to the Syrians themselves," says Karin Putt, who coordinates the Syrian Heritage Archive Project. It's a country that was and still is more than a devastating civil war, which will hopefully manage at some point to revive its past.

That's another goal of the archive: to provide information to reconstruct the country when the war ends.

Photographer Issam Hajjar has also been involved in the Syrian Heritage Archive Project since 2015. That hasn't always been easy for him. "A whole package of memories" are associated with the images from his home country, he says. But that doesn't stop him from contributing to the digital archive in Berlin: "To show Syria's diversity is a life mission for me."

Home
Print
Newsletter
More on this topic
"Syrien – ein Land ohne Krieg": Syria, as it once was Aleppo soap: Balsam from a war zoneReconstruction of Aleppo: ″Others destroy and we rebuild″
Related Topics
'Islamic State' | IS, Antiquities and historical monuments, Archaeology, Islamic architecture, Syrian Civil War
All Topics

One in four people in Germany has a migration background, but less than 8% of the members of parliament have foreign roots. Germany is out of touch with reality, says Maissun ... END_OF_DOCUMENT_TOKEN_TO_BE_REPLACED

Germany’s electorate includes some 7.4 million citizens with international roots, while many more millions of residents from abroad aren’t allowed to vote. Both groups are often ... END_OF_DOCUMENT_TOKEN_TO_BE_REPLACED

Germany's foreign policy is explicitly values-based. But what happens, Ralf Bosen asks, when democracy, the rule of law and human rights collide with the logic of trade and ... END_OF_DOCUMENT_TOKEN_TO_BE_REPLACED

No other Western poet was arguably so well-versed in the Koran or so fascinated by Islam as Germany's national hero, Goethe. In a new publication that examines all Goethe's ... END_OF_DOCUMENT_TOKEN_TO_BE_REPLACED

Migrants are often maligned as being responsible for Europe's problems. Yet their integration is in Europe's interest. Michael Thaidigsmann believes that a long-term vision is ... END_OF_DOCUMENT_TOKEN_TO_BE_REPLACED

How could the Afghan government and its institutions collapse so quickly? That things were going wrong in Afghanistan had been obvious for a long time, yet the West preferred to ... END_OF_DOCUMENT_TOKEN_TO_BE_REPLACED
Author:
Christina Küfner
Date:
Mail:
Send via mail

END_OF_DOCUMENT_TOKEN_TO_BE_REPLACED
Social media
and networks
Subscribe to our
newsletter