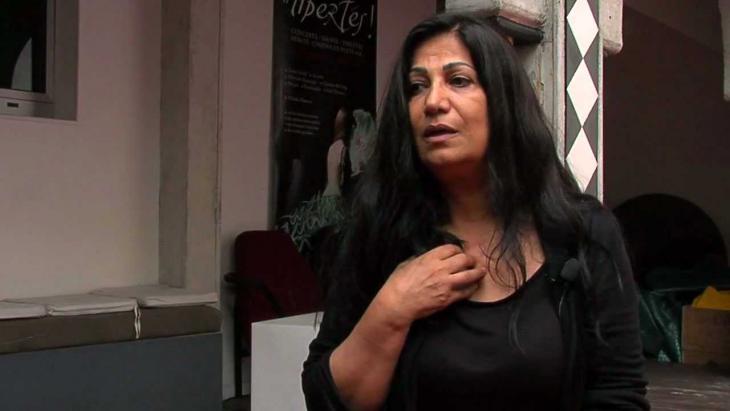 In her essay, the Syrian poet Hala Mohammad looks back at the early days of the uprising against the Assad dictatorship and how her country subsequently slid into civil war. The regime, she says, forced the population into a war that Syria and the Syrians can only lose

Once upon a time, not so very long ago, there was a people known as the Syrian people. They lived in a country called Syria, which bordered the Mediterranean, facing the rising sun. It was here that the first alphabet was created. The rhythm of its civilisation was a mosaic of languages, religions and tribes that permeated the country, shaping its geography and its history.

After 45 years of tyranny under one-party, one-person rule, Syria wanted to open its gates and liberate the word that had fallen silent. But from the word flowed only pain and streams of blood.

In March 2011, millions of young men and women all over Syria opened their doors. For the first time, they poured out onto the streets and joined peaceful demonstrations, where they shouted out what their hearts desired: freedom! They were, and still are, armed with nothing but the word.

The regime opened fire. It used rifles, artillery, missiles, tanks and planes. It ordered barrel bombs to be dropped on the people. It bombarded peaceful citizens with deadly poison gas as they slept. Two hundred thousand people fell silent, killed by a hellish war machine; two hundred thousand more were imprisoned, and a hundred thousand were probably tortured to death. Eight million people were displaced, both inside and outside Syria. Those who are still alive tell the tale. 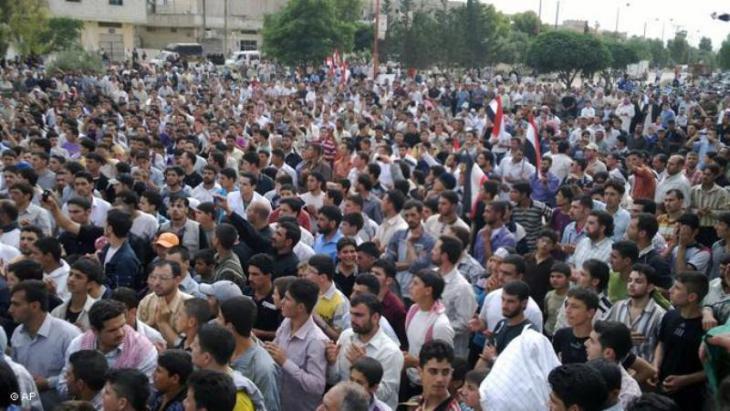 How it all began: people demonstrating for democracy and freedom in Homs, Syria, in March 2011. "For the first time, they poured out onto the streets, and joined peaceful demonstrations, where they shouted out what was in their hearts: freedom!" writes Hala Mohammad

How the Syrian regime reacted to peaceful demonstrations

Once upon a time, the Syrian regime called on its allies – the tyrants of Russia and the theocrats of Iran – for assistance. It made use of the global community's silence on its massacres – a silence that seemed to say Syria was not even part of this world.

With the help of its security apparatus, which was supposed to stifle the revolution, the regime fetched Islamic extremists from al-Qaida and others of their ilk into the country or released them from its prisons, so that the civilised world would believe it was combating brutal terrorists. Both sides served their own interests, but regime and terrorists worked hand in hand, making life hell for the Syrians in order to silence the voice of freedom. And still, the democratic world remained silent on the subject of the massacres.

They are stealing the soul from our revolution. But as long as we live, we will not stop telling the tale.

Meanwhile, the Syrians continued their peaceful revolution with creative means. They used images, photos and films, poems, novels, songs and music, painting and theatre. They insisted on maintaining a culture of life in the face of a culture of murder.

The traces of life are being obliterated, as if with a giant eraser, as if the Syrians who were killed, arrested or driven out never existed at all. Every time the peaceful revolution calls for the unity of the people and a democratic state with dignity, equal rights for all citizens, social justice and a non-religious, non-military civil state, in which Syrians can live together as their fundamental nature tells them they should, the regime and the extremists resort to the most brutal violence and plunge the Syrians into the darkness of a war they never wanted and have always resisted, a war that is literally violating them, and in whose fire they are perishing.

The regime forced the population and the army into a war that Syria and the Syrians can only lose. It roused the beast of confessionalism that had long slumbered in the lap of national unity. Our unity is the civil treasure of the population, and since the start of our story and since the first moment of our revolution, the cry has echoed through the streets: "One, one, one – the Syrian people are one!" and "Stop the murder – we want a country for all Syrians!". In response, the press that is loyal to the regime focused on the extremists, who are increasing in number and strength. 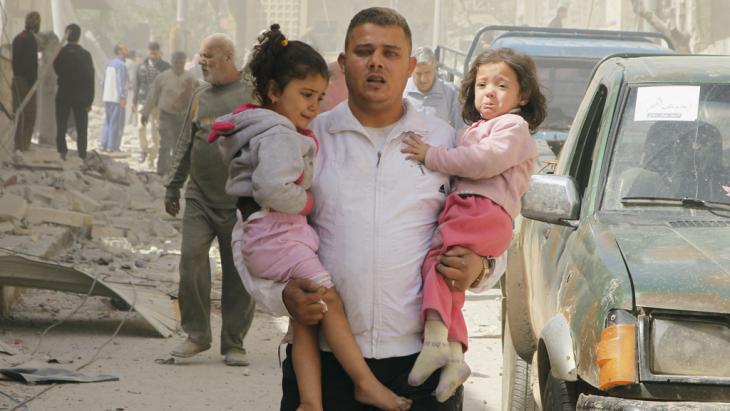 "The traces of life are being obliterated, as if with a giant eraser, as if the Syrians who were killed, arrested or driven out never existed at all," writes Hala Mohammad. Pictured here: a man carries two children from the ruins of a house in Idlib after a barrel bomb attack orchestrated by the Syrian regime

Shouting out to break the silence

These extremists come to Syria armed for war, funded by Arab and other states, occupying areas and subjecting the people who live there to a tyranny dressed up as religion. The people thus find themselves caught in the middle between terror, a military regime and religious extremism.

The demonstrators appealed to the democratic world – indeed, they continue to do so to this day – and the Syrians have never understood how, day after day, the democratic world can strike the daily news of our impending death from its annals, its news and its dictionaries. How can this world overlook the fact that the windows of our houses are wide open for freedom and sympathy, and that the Syrians have courage and dignity and want peace?

Once upon a time, not so very long ago, there was a siege.

The Syrian people want to live in dignity. They want the release of political prisoners from Assad's prisons and the prisons of the Islamists. They want the return of the refugees, the exiles and those who have been driven out. They want to expel the religious and military occupiers.

Free people of the world: cry out against the silence that is laying waste to Syria day after day and at this very moment! Cry out against the silence that is stifling Syria, letting it die of starvation and thirst and robbing it of its dignity. The world must not become an accomplice. Cry out to stop the massacre! Cry out with us to awaken justice! We believe in the power of the free word. Cry out so that Syria can once again tell stories in the moonlight. And cry out so that we can tell our stories together again.

Any reconciliation between Turkey and Syria’s Assad regime would have disastrous consequences for many Syrians, explains Syria expert Kristin Helberg END_OF_DOCUMENT_TOKEN_TO_BE_REPLACED

There are signs of an imminent normalisation of relations between Turkey and Syria. This would allow Erdogan to score political points domestically before the upcoming elections ... END_OF_DOCUMENT_TOKEN_TO_BE_REPLACED

As Syrian camps housing families of Islamic State fighters get more dangerous, there are calls to bring children out, even if the mothers don't want to go. The idea of separating ... END_OF_DOCUMENT_TOKEN_TO_BE_REPLACED

Where are the measures to deal with the looming challenges facing the Arab world? In this commentary, Marwan Muasher warns that the region is in grave danger of falling behind ... END_OF_DOCUMENT_TOKEN_TO_BE_REPLACED

At the end of every year, the team at Qantara.de gives you a run-down of the ten most-read articles on the site over the past 12 months. Here is a quick overview of the stories ... END_OF_DOCUMENT_TOKEN_TO_BE_REPLACED

Social engagement is often motivated by religious factors. A new book explores the background to these community efforts and appraises how effective they are in helping to ... END_OF_DOCUMENT_TOKEN_TO_BE_REPLACED
Author:
Hala Mohammad
Date:
Mail:
Send via mail

END_OF_DOCUMENT_TOKEN_TO_BE_REPLACED
Social media
and networks
Subscribe to our
newsletter