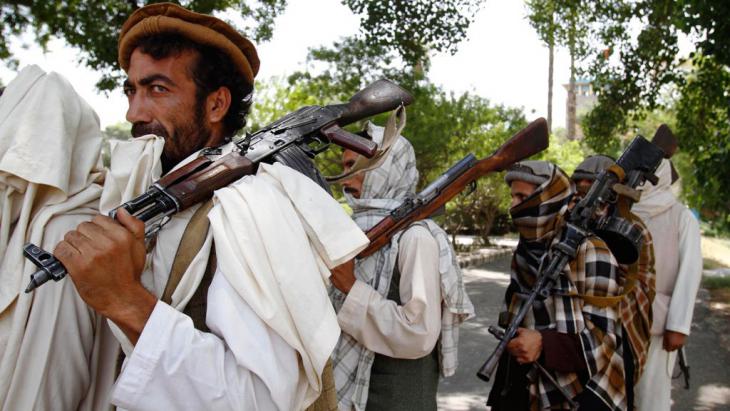 Over one million displaced Afghans

The most recent suicide attack on the outskirts of Kabul shows once again that in Afghanistan, battles are not only being fought between the army and the rebels. Anyone can find themselves targeted and civilians are the ones suffering the most. By Matthias Lauer

Barely has a good month passed since the worst Taliban attack in Kabul for 15 years, and it has already begun to fade in the public consciousness. More than 60 people were killed in the attack close to the headquarters of an Afghan elite military unit, and more than 300 others injured – more than half of the victims were civilians.

In view of this attack, which took place on 19 April, and others that have occurred in recent months, the Taliban's announcement at the start of its "spring offensive" that it would pay particular consideration to the civilian population appears cynical. Nevertheless several European nations are holding fast to their plan to deport Afghans who have been refused asylum.

The European Commission is also not backing down from the planned repatriation of almost 80,000 refugees to the nation on the Hindu Kush. Justifying these deportations, the German government has even made explicit reference to the Taliban's statement that it would protect the civilian population.

The Taliban's latest attacks make it clear that what it views as "occupiers" includes all those who are associated in any shape or form with "the state". For example, in January 2016 there was a targeted attack on a minibus carrying employees of the private television broadcaster Tolo TV. In the attack on staff at Afghanistan's largest TV channel, seven employees were killed and more than 25 others injured by the force of the explosion. 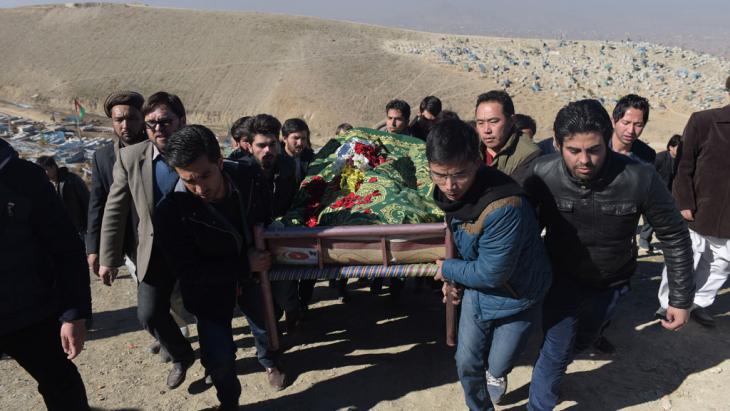 Targeting journalists: the Taliban declared the Afghan broadcaster "Tolo TV" as a military target in October 2015 owing to the ″anti-jihadist″ tone of its coverage. An attack on a minibus carrying Tolo TV employees in January killed seven people

"Propaganda of a Satanic broadcaster"

Before the attack, the Taliban had described the station's coverage of the capture of the city of Kunduz as "the propaganda of a Satanic broadcaster" and issued a threat that anyone associated with such channels will be viewed as enemy personnel.

The first attack since the appointment of the new Taliban chief Maulawi Haibatullah Achundsada on 25 May also targeted a minibus travelling through the outskirts of Kabul during the morning rush hour. The passengers killed in the attack were court employees on their way to a hearing in the province of Maidan-Wardak. A total of 11 people were murdered and many others injured.

The Taliban issued a statement claiming the attack was to avenge the execution of six of its members in detention. Both attacks make one thing clear above all, that any person associated with the state in any way is viewed as a legitimate target. Then there are the civilian victims of each of these attacks, who are clearly to be accepted as collateral damage. 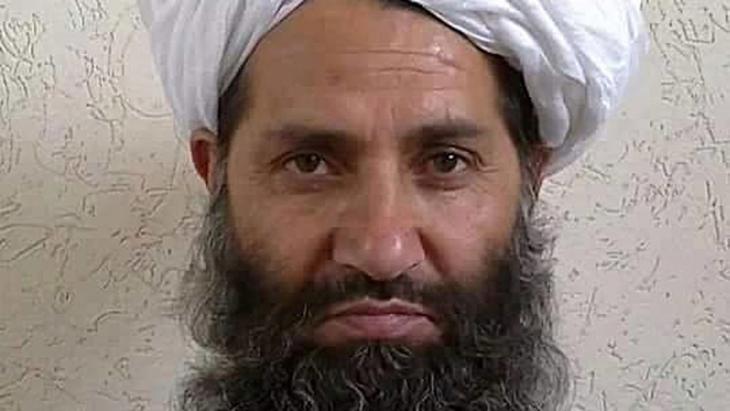 Tough and uncompromising as ever: at the end of May, the Taliban announced that the religious cleric Achundsada would succeed as head of the Taliban, following the death of Mullah Achtar Mansur, who was recently killed by a US drone strike in Pakistan. During Afghanistan′s era of Taliban rule from 1996 – 2001, Achundsada was a high-ranking judge and passed numerous brutal sentences. After the regime was toppled at the end of 2001, Achundsada became the group′s chief lawyer

But spectacular suicide attacks such as these are just the tip of an iceberg that occasionally merits a mention in German media. An analysis recently published by the Afghanistan Analysts Network illuminates the profound nature of this sense of an ever-present threat in a country where the Taliban controls entire provinces and where fighting took place in 31 of the nation's 34 provinces last year.

Families whose relatives have fled to Europe were interviewed about what drove them to flee. As well as the nation's economic crisis, those interviewed repeatedly cited a sense of defencelessness in the face of persecution as well as violent experiences both in the past and the present.

People who were in some way associated with ISAF troops no longer feel safe in any region of Afghanistan. Those affected include interpreters or former members of the army through to caterers and logistics operators: a variety of people from a wide range of sectors. The impression of a permanent threat is further underlined by the number of targeted killings, for example of human rights activists or political opponents, which according to the Afghanistan Analysts Network increased by 11.4 percent last year alone.

But these targeted killings are not the unique selling point of the Taliban. The increasing number of drone attacks on rebels also carry this euphemistic title. These often miss their target.

The most conservative estimate of the Bureau of Investigative Journalism is that 60 civilians were killed by US drones in the year 2015 alone. The most devastating case of an attack on civilian targets by foreign troops in recent months is the bombing of a Medecins sans Frontieres hospital in Kunduz in October 2015. 42 civilians were killed, although the Pentagon's own investigation into the incident, a report that was published recently, concluded that this was not a war crime. 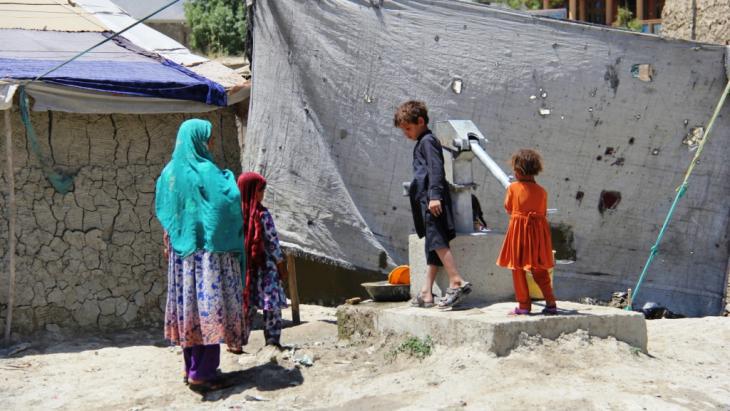 Does anyone care? The ongoing conflict with the Taliban is causing huge suffering among the Afghan population. According to a report by Amnesty International, there are currently twice as many displaced people within the country as there were in 2012. The number of internal refugees rose from a scant 500,000 in 2012 to 1.2 million in April of this year. The organisation blames the Afghan government and the waning of international interest in Afghanistan

As ever in this war, the civilian population is on the losing side. More than 11,000 dead and injured people in the year 2015 and a new record high in the number of people injured in the current year make it clear just how dramatic the situation is at the present time.

The Afghan government of national unity under Ashraf Ghani and Abdullah Abdullah is facing huge challenges and has already failed in the eyes of many Afghans. The economic crisis could not be halted, the war continues to escalate and the first four months of 2016 saw in excess of 100,000 new internally displaced people join the existing number of more than one million.

Over the coming months it will also become apparent how the Taliban will conduct itself under the new leadership of Haibatullah Achundsada. In any case, the current escalation of violence appears to have postponed yet further the prospect of peace talks.

If the European states take their responsibility seriously in this situation after 15 years of military intervention in Afghanistan, a first step would be to set aside plans to repatriate people to Afghanistan. While more than 700 schools in conflict regions of Afghanistan remain closed, this would mean that Afghans in Germany would have access to education and need not worry, before attending their place of work, about whether they will return home safely.

Elke Muller is fighting for her daughter Anna, who fell in love with a young Afghan and converted to Islam. The mother spoke to Esther Felden about feeling alienated and her fear ... END_OF_DOCUMENT_TOKEN_TO_BE_REPLACED

Despite ongoing peace negotiations between the United States and the Taliban, the bloody conflict in Afghanistan continues to take a heavy toll on the country’s people. Can talks ... END_OF_DOCUMENT_TOKEN_TO_BE_REPLACED

Within eyeshot of the Bosnian-Croatian border, thousands of refugees are camping in squalor on a former garbage site. Their supplies are scarce. ... END_OF_DOCUMENT_TOKEN_TO_BE_REPLACED

Under the tutelage of Pakistan's military, the Taliban brought peace to Afghanistan the last time it ruled the country. But it was the peace of the graveyard, which it could ... END_OF_DOCUMENT_TOKEN_TO_BE_REPLACED

In "What We Left Unfinished", Afghan-Lebanese-American filmmaker Mariam Ghani discusses the forgotten era of Afghan Communism and its ties to arts, culture and propaganda. ... END_OF_DOCUMENT_TOKEN_TO_BE_REPLACED

Threatened with death by the Taliban, director Hassan Fazili fled to Europe with his family, filming their odyssey on his mobile phone. Itʹs not the first time that the refugee ... END_OF_DOCUMENT_TOKEN_TO_BE_REPLACED
Author:
Matthias Lauer
Date:
Mail:
Send via mail