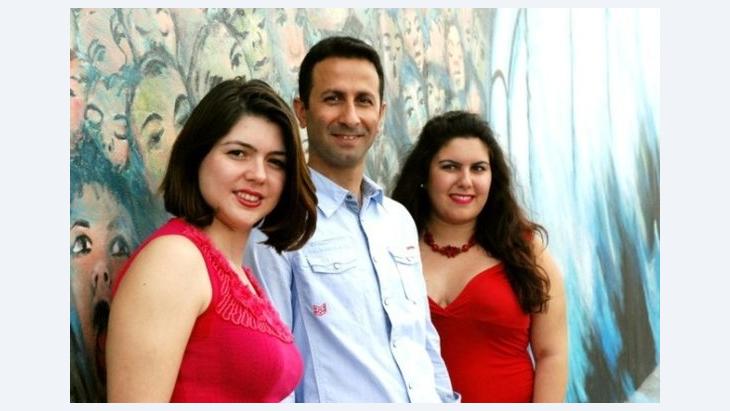 ﻿The trio Olivinn blends Turkish folk songs with German art songs and jazz elements, creating a universal music language in which listeners from different backgrounds discover elements that are familiar to them. Ceyda Nurtsch met the group and set out on a musical journey through different cultures and history

﻿"We want to take you on a journey," says Sinem Altan as she sits down at the piano in the Theater Ballhaus Naunynstrasse in Berlin. The sound of the piano merges with the sound of the bağlama, a long-necked lute that Özgür Ersoy, who was born in the Turkish town of Erzincan, has been playing since the age of eight. When Begüm Tüzemen begins to sing, the three become an organic whole.

Together they take the audience on a journey to a country where the stony plains of Anatolia merge into the lush meadows of Europe, creating a compelling image of a country that seems near and yet far, familiar and yet strange. Being one in the music is incredibly important to the three musicians, a fact reflected in the name of the group.

"The basalt stone Olivine was the source of inspiration for our name," explains Sinem. "It can only come about at a very specific temperature. Similarly, our music can only come about when the three of us come together, combining our different perspectives, experiences and personalities."

Longing for Turkey as a source for inspiration

Olivine can be found in Anatolia, to where the trio traces its musical roots. It is the way that Sinem, Begüm and Özgür deal with these roots and how they derive their different approaches to music from them that makes their music quite unique.

The vivacious Sinem, who was born in Ankara, is responsible for the trio's musical arrangements. Her musical talent shone through even at the age of 11. After winning a scholarship, she came to Germany to study piano and composition. That was 17 years ago. She says that it was primarily her longing for her native country and the search for her musical roots that have shaped her approach to music.

This is certainly not the case with Begüm Tüzemen, who has a powerful voice. Born in Istanbul, she studied musicals at the State Conservatory of Istanbul University. She was strongly influenced by the Cosmopolitan flair of the metropolis on the Bosporus. Growing up, she listened mostly to pop music – "just like most teenagers in Istanbul," she says – and had a passion for western classical music. Nevertheless, she is no stranger to folk music.

"My grandfather introduced me to famous performers such as Neşet Ertaş, who died recently, or Aşık Veysel, one of the most influential Alevi Turkish singers and poets," says Begüm. Through her work within the trio, she says that she now has the opportunity to delve deeper into Turkish folk songs. She quickly learned the necessary techniques that had not previously formed part of her vocal training.

"It is not just about hitting the right notes. You have to understand which story is being told in the songs, which feeling is being transmitted. You have to submerge yourself in the story, understand that this art form is built on decades of experience," she says, describing the learning process through which she worked. Today, she is annoyed that she did not delve into this genre sooner and that Turkish folk music is at best seen as foreign and more frequently considered inferior by many families in Turkey's larger cities who look to the West.

Özgür – "the soul of Anatolia, who carries his roots around with him as if in a rucksack", as the two ladies in the trio say – also feels strongly that Turkish folk songs should be valued more highly. "I wish that more Turkish people who look to the West would understand that Turkish folk music and art music form a unit. The music conservatories are making a big mistake in this respect too," says Özgür, who himself studied at the State Conservatory of Ege University in Izmir and plays not only the long-necked lute, but also the duduk (an Armenian flute), the mey and the bender, which is similar to a tambourine. 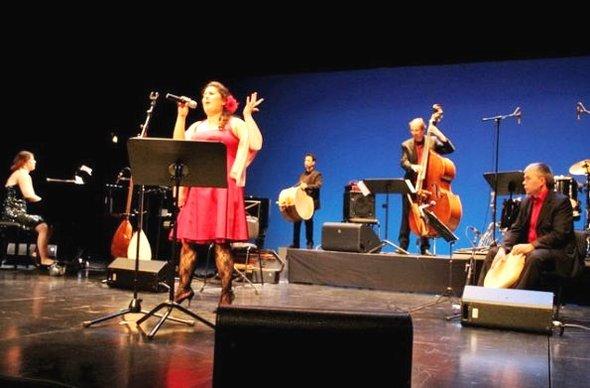 Creating contemporary music that "does not lose any of its variety or punch": The trio Olivinn

​​The three musicians feel that the music that emerged in Anatolia – where numerous peoples (including the Hittites, the Ionians, the Caucasians and the Circassians) have lived and left their mark – has enormous potential. They take this potential and refine it in a playful manner.

"Schubert introduced elements of the German folk song into the art song," says Sinem, adding that this has not yet happened in Turkish music from this century. Her arrangement "Hekimoğlu/The Trout" is a tribute to the Romantic composers of Vienna and to one of her favourite composers. In this piece, Oriental quarter tones gradually flow into what is one of the most well-known of all German art songs, "The Trout" (see video below).

Little by little, the rhythm shifts, falters and by the time Begüm sings the line "They call me Hekimoğlu, I have made myself a shotgun", Schubert's stream has turned into an Anatolian river flowing towards the Black Sea, and audiences find themselves listening to a song about a farmer from the Ordu province who becomes a hero when he stands up to a big landowner.

Through this synthesis, in which both songs retain their individual features, "people who would perhaps not normally sit beside each other discover their roots in one and the same piece," they explain. This is exactly the effect that the trio, which has been together since 2008, wants to achieve.

Thinking outside the box

"The challenge is to carve out your own path," says Sinem, who is quick to emphasise that this means not going down the "belly dancing and doner kebab" route or being categorised as a band that plays at weddings. As far as they are concerned, the current case against the controversial Turkish pianist Fazıl Say, whose statements have been viewed as a provocation and with whom Özgür has already performed on stage, is symptomatic of the way people deal with artists who think outside the box.

Nevertheless, the trio would not like to be sucked into the popular multi-cultural stew that is world music. In Turkey, new paths are often presented as being a kind of "inherent exoticism". "The danger with this," says Sinem, "is that you see yourself as exotic, you look at yourself through the eyes of people from other countries, i.e. from the outside."

Stagnancy is anathema to this trio. It is fun not only to listen to them, but also to watch them, because the wit, the joy of playing and the pure delight in cheery, cheeky provocation is written all over their faces. Although they have already performed with radio symphony orchestras, brass bands, and the Berlin DJ İpek İpekçioğlu, the Olivinn trio still feels that it is just starting out. The three musicians' aim is to make contemporary music that "does not lose any of its variety or punch." The audience's enthusiastic response confirms that they are on the right track.

This year Annemarie Schimmel, the great German scholar of Islamic studies, would have turned 100. Unique within the German and international academic community of her time, ... END_OF_DOCUMENT_TOKEN_TO_BE_REPLACED

The Palestinian militant organisation Hamas, with Hezbollah's help, is building up a military presence in Lebanon, the ultimate consequences of which could be devastating, writes ... END_OF_DOCUMENT_TOKEN_TO_BE_REPLACED

More and more voices are being raised in Turkey that challenge previous versions of the country's history. These alternative accounts, still largely ignored by official quarters, ... END_OF_DOCUMENT_TOKEN_TO_BE_REPLACED

Violence against doctors and lawyers in Turkey has been growing in recent years. But instead of taking action, the government is openly hostile towards two unions representing the ... END_OF_DOCUMENT_TOKEN_TO_BE_REPLACED

The Sufi Trail is a long-distance hiking route from Istanbul to Konya that seeks to revive the ancient tracks used by foot pilgrims on their way to Mecca. Marian Brehmer spoke to ... END_OF_DOCUMENT_TOKEN_TO_BE_REPLACED

Foresight is needed to turn the tide of German policy. Being independent of Russia must not lead to dependence on authoritarian regimes in the Middle East. By Kristin Helberg END_OF_DOCUMENT_TOKEN_TO_BE_REPLACED
Author:
Ceyda Nurtsch
Date:
Mail:
Send via mail

END_OF_DOCUMENT_TOKEN_TO_BE_REPLACED
Social media
and networks
Subscribe to our
newsletter