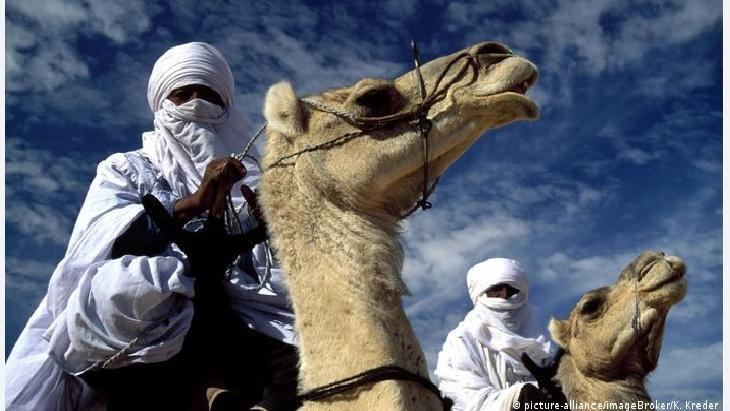 The Tuareg: literature, language and culture
"The journey of the princess"

The term "Tuareg" refers to tribes and nomads who speak dialects of Tuareg and live in Targa, an area in south-west Libya recently renamed Wadi Al-Hayat but previously known as Wadi Ajal. By Mustafa Abdullah Abdulrahman Bashir

One estimate places the total Tuareg population, which is divided among Libya, Mali, Niger, Algeria and Burkina Faso, at approximately 1.2 million. The Tuareg community in Libya, which is culturally distinctive from Tuareg in other countries, is estimated to range from 60,000 to 250,000, yet a lack of clear records makes precise figures hard to come by. It is clear, however, that the Tuareg are a minority group in Libya.

The Tuareg were given different names by travellers, orientalists and historians, some of whom began using the term "blue men" because of the blue clothing worn by the Tuareg, along with the special fabric dyeing techniques they used that transmitted colour to the skin. The Tuareg, however, refer to themselves as "Imuhagh".

Tuareg is also the language of the Tuareg people, but there are a number of dialects that vary from tribe to tribe, including Tamasheq, Tamajaq and Tamahaq. The Tifinagh script was used by ancient Tuareg tribes and is still recognised by older generations of Tuareg. Archaeological discoveries related to this script in the Akakus mountains of Libya have revealed facts about the history of the Tuareg. However, recent generations have found it very hard to memorise, and instead, Arabic script is used in daily life.

The rich literary tradition of the Tuareg – as is the case in most Bedouin communities – depends very heavily on the oral tradition to transmit stories from one generation to the next. This tradition pulls from rich and diverse sources including poetry, proverbs, folktales, legends and riddles. Women have been known to compose poems to commemorate important social events including weddings, births and the change of seasons.

This article presents a translation of a folktale from one sub-type of Tuareg literature, called Imayen – works of spoken literature often about family life, animals or ancestral tales. Traditionally, mothers and grandmothers play a major role in telling their children Imayen to educate and entertain them. To the author's knowledge, this is the first time this story has been translated to English or Arabic. 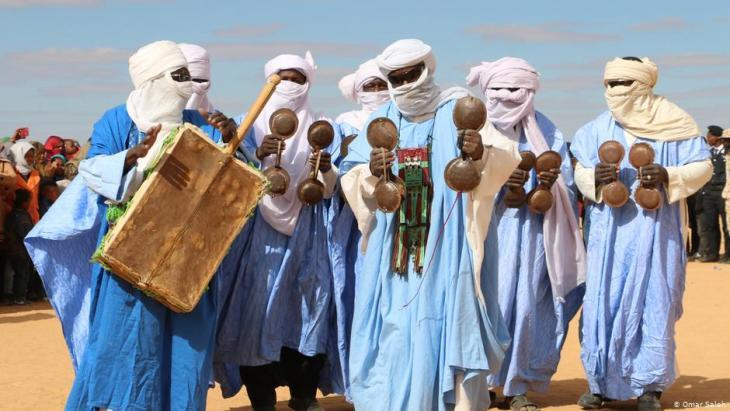 Down through the centuries, the Tuareg have been given different names, including "the blue men" because of the blue clothing they wear and the special fabric-dyeing techniques they used that transmitted colour to the skin. Pictured here: a group of traditional Tuareg musicians dressed in blue

Translated story: "The journey of the princess"

Once upon a time, there were two little children who had lost a loving and caring mother. Immediately after her death, their father married another woman, who would become their stepmother. Before their mother died, she had given her children a goat, which they looked after every day. One day, a miracle happened before their eyes. By the grace of Allah, the goat's droppings turned into dates, and its urine into milk, and it went on and on.

Their stepmother had her own children, whom she fed loaves of bread, but she fed her stepson and stepdaughter crumbs and water. Despite this, she was shocked to see that her stepson and stepdaughter were growing up healthier and stronger than her own children. She became suspicious, so she asked her children to keep an eye on their stepbrother and stepsister, who were tending their goat, in case there was something going on. The children were surprised at what they saw. As the afternoon approached, they saw the goat's urine turning into milk and its droppings into dates. Now, their stepmother knew the secret.

She schemed a plan to kill the goat. At the time, her husband was away on a journey. The stepmother told her children that when their father returned home, they should tell him that their mother was sick. Upon arriving, he was warmly welcomed. Then he asked: "Is everything alright?"

"Yes," they responded. "Everything is alright, except our mother is sick."

As was the custom, he had to slaughter a goat. So, the father attempted to slaughter his children's goat to heal his wife. But he couldn't. The goat was protected with the power of God! The father became furious. He held his late wife's daughter, tied her up, and beat her brutally, for he suspected that she had done something to the goat. The magic spell broke. He was finally able to kill the goat and heal his sick wife.

The following morning, the father led the family to a distant place, leaving behind the girl tied up with goat's skin in the open. While they were in the middle of the journey, the girl's brother cried: "Oh! I'm sorry. I have forgotten my whip at home. I must run back to fetch it." 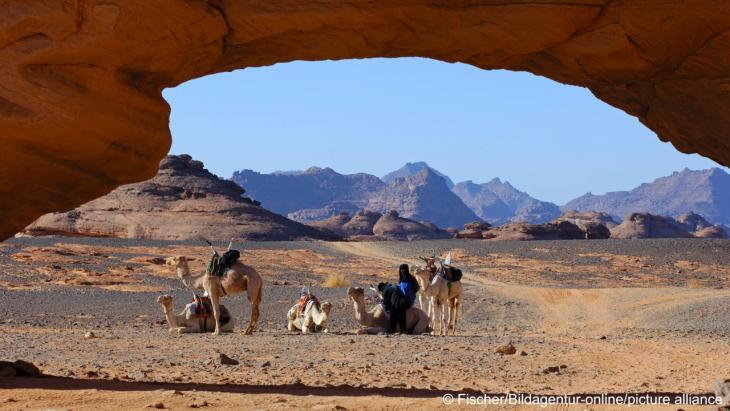 "The Tuareg community in Libya, which is culturally distinctive from Tuareg in other countries, is estimated to range from 60,000 to 250,000, yet a lack of clear records makes precise figures hard to come by. It is clear, however, that the Tuareg are a minority group in Libya," writes Mustafa Abdullah Abdulrahman Bashir

The abandoned girl becomes a princess

So, he returned to his sister, untied her, and retrieved his whip. Before he turned to leave, a miracle happened again, by the grace of God. The goat's skin turned into a real goat. The boy carried his sister, put her on the back of the goat, and decided to take the opposite direction. It was a difficult decision, but they had to escape to save the sister. As the goat carried the sister, it ran and jumped. The girl kept falling off every now and again. Then she started vomiting blood because she was brutally and severely beaten. After travelling for a long time, they had to stop for a rest. In the meantime, an entourage of a prince passed by. The boy stood up, gathered all the strength he could muster, and ran to interrupt the convoy.

Seeing him, the prince ordered the convoy to stop. He then asked the boy whether he needed help. The boy's response was "yes", and he was asked to bring the sister to the prince. Dazzled by her beauty, the prince immediately married the girl.

Time passed, and the father longed to see his daughter. He took the journey to the palace where his daughter was the princess. He was warmly welcomed. A tent was pitched, and a banquet held in his honour. However, before the meal was served, the princess asked her servants to take out some parts of meat – the head, the heart and the liver. The feast was also attended by a host of elders and noblemen.

After the feast, the princess came to greet her father. She sat beside him and said: "I salute you, my dear father. I hope you are comfortable in this tent. I also hope that the meal was good." "Yes, my lovely daughter," the father said. "Everything is perfectly well," he added. Then the princess continued: "What about the meal you were served, wasn't there anything missing?"

He quickly remembered. "Yes, there were a number of things missing on the table," he said. "The meat of the head was not there."

The princess triumphantly responded: "Oh! Where was your head when you chose to tie me and abandon me all alone in the desolate desert?"

The princess pressed him further: "What else was missing?" Her father blushed with embarrassment, saying: "The heart was missing too."

The princess (still gleeful) replied: "Oh! Where was your heart when you chose to tie me and abandon me all alone in the desolate desert?"

The princess once again: "Anything else?" Her father (now very uncomfortable): "Well, the liver was missing too."

The princess (now overwhelmingly victorious): "Oh! Where was your liver when you chose to tie me and abandon me all alone in the desolate desert?"

Of these questions, the father answered none. He felt guilt and was full of remorse.

Mustafa Abdullah Abdulrahman Bashir translated this story from Tamasheq to English. He is a lecturer and researcher in translation studies at the University of Tripoli, Libya. He is a native speaker of Tamasheq who endeavours to transmit traditional Tuareg stories to a wider audience.

The Islamic Republic has been unable to quell the civil unrest that erupted three months ago, after Mahsa Amini died after being detained for violating hijab rules. Now the ... END_OF_DOCUMENT_TOKEN_TO_BE_REPLACED

Cries of "Benghazi!" still resonate across the USA ten years after a deadly terrorist attack in Libya killed the U.S. ambassador and three other Americans. Ethan Chorin re-tells ... END_OF_DOCUMENT_TOKEN_TO_BE_REPLACED

After a two-year hiatus, the Arab League re-convened at the beginning of November in Algiers against a backdrop of uncertainty and discord. By Pierre Boussel END_OF_DOCUMENT_TOKEN_TO_BE_REPLACED

In the run-up to the COP27 global climate summit, hosted by Egypt in November, it is worth noting that little rainfall, aggressive heatwaves and worsening drought make the Middle ... END_OF_DOCUMENT_TOKEN_TO_BE_REPLACED

The southern shores of the Mediterranean Sea are losing sand faster than almost anywhere else. The ecological and economic damage is immense. The good news is, there are ways to ... END_OF_DOCUMENT_TOKEN_TO_BE_REPLACED

END_OF_DOCUMENT_TOKEN_TO_BE_REPLACED
Social media
and networks
Subscribe to our
newsletter