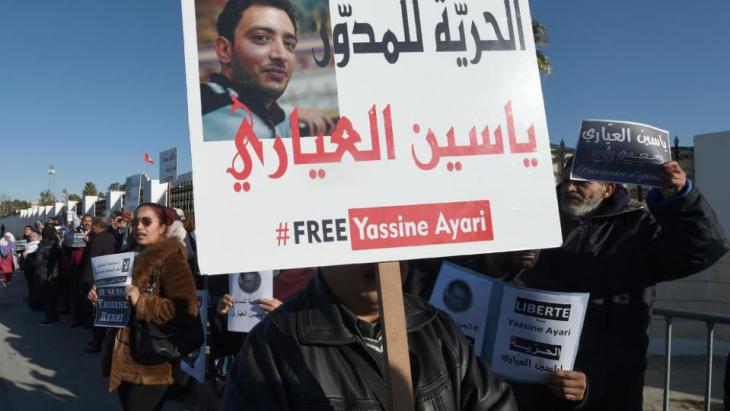 The reform of Tunisia's judiciary has not progressed since the political upheaval of 2011. According to the constitution passed a year ago, however, new institutions are planned for the future. The constitutional court soon faces a mammoth task. By Sarah Mersch

"Down with military trials" and "Tunisia is a civilian state" demonstrators chant outside the Tunisian military appeals court. Inside, the blogger Yassine Ayari has just been sentenced to six months in prison, because the court found he had defamed the army on Facebook.

It is unacceptable for a civilian to be tried before a military court, says Yasmine Kacha, head of the Reporters Without Borders office in Tunis. She's afraid the trial will set a precedent. "'Insulting the army' can be anything and nothing. It could be used tomorrow to sentence a whistleblower who reveals important information to the public."

For many Tunisians, Yassine Ayari's case is evidence of the fact that old reflexes and mechanisms are still in place in the justice system. Four years on from the country's political upheaval, the judiciary has yet to be reformed. Transparent and fair elections are all well and good, but by no means enough to make a democratic state out of Tunisia, says Hasna Ben Slimane, a reporting judge at the Tunisian administrative court. "Legitimate political forces are important, but we need another force. The judiciary must assume a guardian role."

Reforming the justice system is a delicate task that none of the interim governments has tackled seriously to date, making piecemeal changes at most. After 2011, 93 judges were dismissed on the insistence of politicians. Most of them were taken on again a short time later because the dismissals had no basis in law. 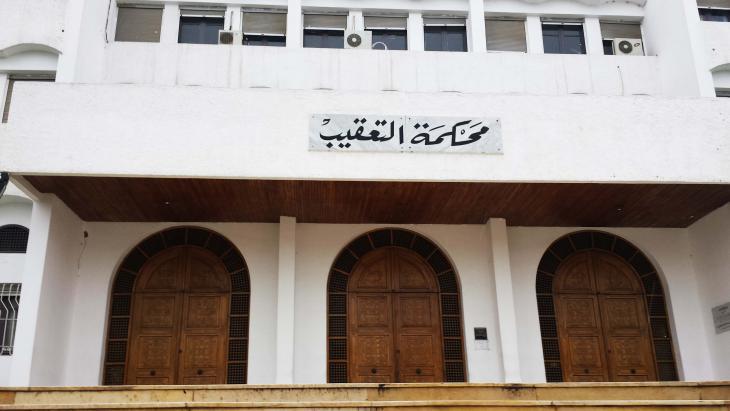 Ripe for restructuring: the most difficult thing about the reform is that it is like trying to repair a machine while it is running, without allowing it to stall or break down, says Hasna Ben Slimane, a judge at the Tunisian administrative court

"At that time, the executive adopted some of the old regime's practices. But we didn't want to follow that logic any more," says Salsabil Klibi, a professor of constitutional law at the University of Tunis. Such conflicts between the Tunisian Justice Ministry and the judges have deepened the rift between the two groups, she adds.

After four years of provisional solutions, reciprocal accusations, public distrust of the judiciary and distrust of the ministry by those working in the legal system, Tunisia can no longer afford to postpone reform. The constitution, which was passed a year ago, stipulates certain reforms. For instance, before the year is out, a new judges' council must be elected and a constitutional court set up for the first time in the country's history. Justice Minister Mohamed Salah Ben Aissa says it will be a "historic reform" that guarantees the independence of the judiciary.

The judiciary's credibility, says Salsabil Klibi, hinges on these two new institutions, which constitute the "heart of the judicial reform". Yet these new structures alone are far from enough; the future guardians of the constitution face a herculean task. There are often huge gaps between the principles of the already inherently contradictory constitution and the laws in place in Tunisia.

"The judges will have to resolve many delicate issues in practice," says Salsabil Klibi, "for example when it comes to the boundary between freedom of expression and the right to free exercise of religion or the protection of privacy." Reforming all this and setting precedents in the interpretation of the constitution and the legislation will take years.

The most difficult thing about the reform, says Hasna Ben Slimane, is that it is like trying to repair a machine while it is running, without allowing it to stall or break down. "Those affected must be aware of which laws have to be changed. We need a clear schedule, and the judges have to understand that things can change, as the constitution sets new parameters."

Redeployment as the sword of Damocles 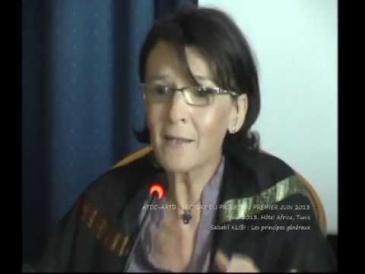 According to Salsabil Klibi, a professor of constitutional law at the University of Tunis (pictured here), the judiciary's credibility hinges on the new judges' council and constitutional court – institutions, which are at the very "heart of the judicial reform"

As a judge at the administrative court, Ben Slimane enjoyed slightly more freedom before 2011 than other colleagues, because the administrative court was less politicised than others. "We sometimes managed to make just decisions," she says. In some cases, there was a high price to pay, "but what must be must be", she says with a trace of pride. "Redeployment was the sword of Damocles that constantly hung over our heads. Anyone who didn't co-operate was sent to the other end of the country." In her opinion, establishing a professional, independent judicial system right across Tunisia that is more than merely a form of punishment for the judges working there, is one of the key tasks for the coming years.

People tend to forget, says Salsabil Klibi, that reform of the justice system will have a major influence far beyond the judiciary itself. She points out that the country's economic crisis cannot be solved without changes to the legal system. "We're having problems getting the economy back on its feet because investors don't have enough faith in the system. And that's because of corruption."

Corruption continues to be a major problem, even after 2011. Although the clan of former ruler Zine El Abidine Ben Ali has lost its monopoly on all areas of the economy, little happens in many areas without bribes to oil the wheels. Legal certainty is therefore a very important issue, says Klibi, and ultimately affects everyone in the country.

Salsabil Klibi believes that the judiciary is in urgent need of reform. After all, it is ultimately the current justice system that makes corruption and tax evasion possible. "We have a lot of building sites to work on simultaneously," she laughs.

Home
Print
Newsletter
More on this topic
NGO report on the Jasmine Revolution and security in Tunisia: How to make the transition from dictatorship to democracyDemocratic transformation in Tunisia: The model student faces difficult tasks Tunisia's new constitution: The pain and joy of giving birthDeath penalty in Tunisia: On the way to class justice
Related Topics
Arab bloggers, Justice, Rule of law, Tunisian Revolution, Zine el-Abidine Ben Ali
All Topics

While Tunisians remain committed to democracy, they are feeling the painful lack of economic and political progress. Much has been achieved in the way of personal freedoms, but ... END_OF_DOCUMENT_TOKEN_TO_BE_REPLACED

"Tlamess", a visually striking experimental feature by Tunisian director Ala Eddine Slim, brings two drop-outs together in a weird, wild cohabitation in the woods: a desperate ... END_OF_DOCUMENT_TOKEN_TO_BE_REPLACED

Tunisia is considered a paragon of the Arab Spring. Despite democratic reforms, however, a mood of political frustration and economic despair still prevails, particularly among ... END_OF_DOCUMENT_TOKEN_TO_BE_REPLACED

Equality in divorce, a ban on polygamy: reformers of Islamic family law have a clear agenda. They are exploiting the ambiguity of traditional jurisprudence. By Joseph Croitoru END_OF_DOCUMENT_TOKEN_TO_BE_REPLACED

Hassan Aourid is one of the most important political and intellectual figures in Morocco. In interview with Ismail Azzam for Qantara, Aourid outlines his vision of the decline of ... END_OF_DOCUMENT_TOKEN_TO_BE_REPLACED

The Arab world is one gigantic pressure cooker. For the most part the lid of repression is on, but it is boiling over with increasing frequency. Whether in Lebanon, Iraq or in ... END_OF_DOCUMENT_TOKEN_TO_BE_REPLACED
Author:
Sarah Mersch
Date:
Mail:
Send via mail

END_OF_DOCUMENT_TOKEN_TO_BE_REPLACED
Social media
and networks
Subscribe to our
newsletter