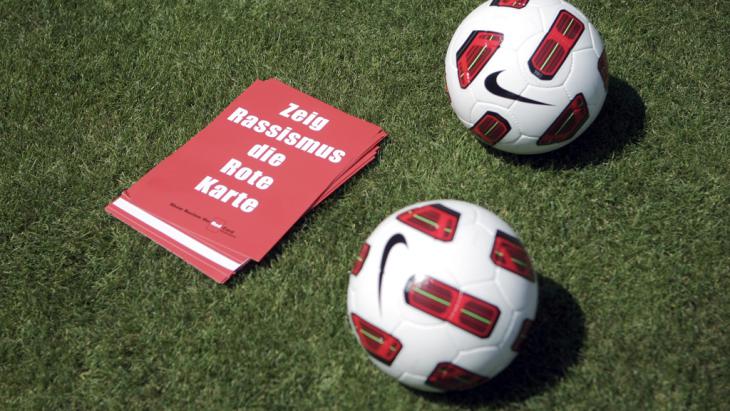 For the UEFA Cup in France, the German national football team bus has been emblazoned with the slogan "Vive la Mannschaft" or "Vive la team". At the same time, members of this team suffer public racist abuse. By Rene Wildangel

Europe is being haunted by a right-wing spectre that wants to turn back time: the "nation" should once again be determined along ethnic lines, the "national team" should be made up of white men whose ancestors have been "German" for generations; in other words "Aryans" in the linguistic usage of Nazi race ideology, or the rather chilling hybrid neo-German form: "Bio-Deutsche", or "native Germans".

A comment by Alexander Gauland has again ensured that the headlines are dominated by the AfD (the right-wing populist Alternative for Germany party): speaking to the ″Frankfurter Allgemeine Zeitung″, he said that most Germans wouldn't want a Jerome Boateng as a neighbour. Or in other words: no black Germans, because for the racist AfD and its milieu, the two have just as little in common as "Germany and Islam".

In the same vein, party speaker Petry was also rude about German playmaker Mesut Ozil, because like millions of Muslims he undertook a pilgrimage to Mecca. For Petry and Gauland, a photograph of Ozil in white pilgrim's robes symbolises the demise of the West.

In the wake of Gauland's "neighbour" comment there were many declarations of solidarity with Jerome Boateng and barely a public figure that didn't make it known that he or she would certainly want to live next door to him. And the huge outcry was important to show that most Germans reject the AfD's open racism.

But also, some of the responses issued in Boateng's defence, because he is a "model professional" (de Maziere) or a "wonderful person and an exemplary football pro" (Rummenigge) give pause for thought. Racism does not depend on the character of the person being subjected to that racist abuse. And if Gauland is being accused of "xenophobia" then this would indicate that a section of German society still regards non-white neighbours as "foreigners". 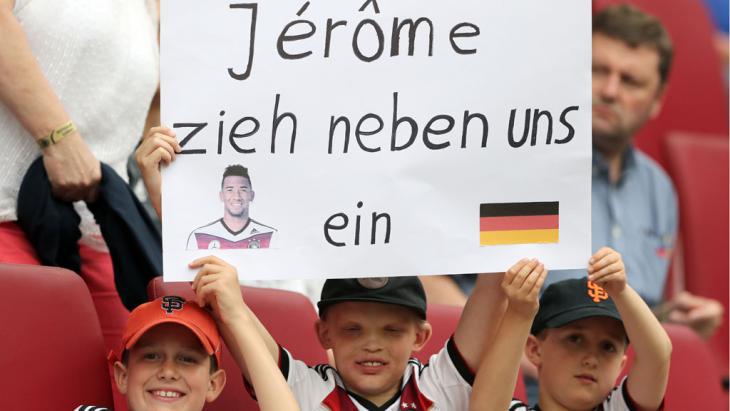 Solidarity versus socially acceptable racism: deputy leader of the AfD Alexander Gauland was quoted by the "Frankfurter Allgemeine Sonntagszeitung" as saying of Jerome Boateng: "People think he′s a great footballer, but they don′t want Boateng as their neighbour." His remarks prompted a huge outcry

Instead of Gauland's neo-Nazi views, suddenly the focus of the discourse was the question of whether Boateng would make a good neighbour. National polls were conducted to find out who would be happy to have Boateng living next door. But the question is completely absurd. Since when are we consulted over who we want to have as a neighbour? And the bitter reality on the subject of neighbours in Germany is this: studies show that non-white people whose appearance or name indicates a migrant family background suffer discrimination on the housing and job markets. Many non-white Germans (or people who otherwise deviate from the presumed "norm") experience Gauland's attitudes each and every day in the form of an omnipresent racism.

Jerome Boateng has also frequently been subjected to racist abuse during his career.  During the World Cup qualifiers in September 2013, at a match on the Faroe Islands, monkey noises could be heard from the stands. Boateng ignored the insult, although at other points he has taken a clear stand against racism.

Without wanting to respond to Gauland's racist provocation, he makes it plain that it will be a long while before everyday racism in Germany is consigned to the past. He also says he is annoyed that "people like that" get "attention and a big platform" by using his name.

What if Jerome Boateng wasn't an exemplary pro, if he wasn't a "model professional"? The story of his brother Kevin-Prince serves as an illustration of this. The story of the Boateng brothers has been documented in a wonderful book by the FAZ journalist Michael Horeni.

In actual fact, the story is about three half-brothers: Jerome, Kevin-Prince and George Boateng. The latter was also a talented footballer, but went off the rails in the troubled Berlin neighbourhood of Wedding and spent time in prison. Jerome grew up in the affluent district of Berlin-Wilmersdorf and entered the Wedding "ghetto" to play football with his two half-brothers. The fenced-in "football cage" where they played street football for hours on end became the link between the brothers, who were growing up in different worlds.

They all experienced racism, but dealt with them in different ways. Kevin-Prince, the gifted but chaotic footballer with the huge ego soon made himself unpopular in Germany. In 2009, he was dropped from the German U21 squad – seven years later, the key members of this team Neuer, Ozil, Khedira, Hummels and brother Jerome would go on to win the World Cup for Germany.

Thereafter, Kevin-Prince opted to follow a different path and became a national player for Ghana, the nation of his father's birth that was largely unfamiliar to him. He became a hate figure in Germany when he fouled Michael Ballack in the English cup final shortly before the 2010 World Cup, putting the German player out of the world championships owing to his injury.

This unleashed a storm of indignation, primarily online, along with a flood of racist insults. The recalcitrant Kevin-Prince went on the offensive against omnipresent racism, in Germany, England and Italy, where he faced particularly high levels of vitriol. In January 2013, he made a decisive statement at a friendly played by his club AC Milan. When insults were yet again directed at him, he kicked the ball in the direction of his racist abuser, tore off his shirt and left the pitch; the entire team followed him in a gesture of solidarity. Who in Germany wants to have the defiant Kevin-Prince as a neighbour?

It is not necessary at this juncture to explore the grotesque delusion of a "racially" defined nation (-al team) – but it is quite remarkable that in Germany today, such ideas are again being publicly and blatantly aired.

More than 80 years after Jewish Germans – and other victims of Nazi racial fanaticism – were denied the right to be an equal part of German society in all contexts; also and especially early in sport and football, which excluded Jewish Germans from clubs with the "Aryan paragraph". 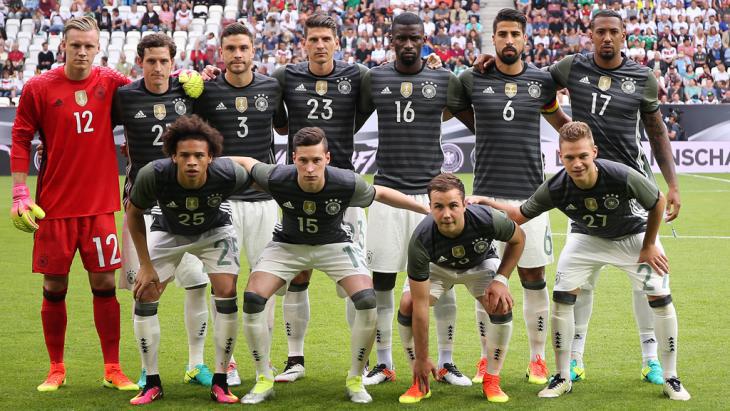 "The identity of football players should not be determined by others on the basis of migration backgrounds, countries of origin, religion or for that matter sexual orientation – homosexuality is the last absolute taboo in football. For the German national squad itself there are in any case only two clear criteria for acceptance: a German passport – and talent on the field," writes Wildangel

The former German national squad player Julius Hirsch was murdered at Ausschwitz. Although this is certainly a far cry from Gauland's statement – essentially the biologistic basis of his world view can also be traced back to the folkish and pseudo-scientific racist discourse of the 19th and early 20th century, just like the abstruse theories of someone like Thilo Sarrazin.

In the world of football, there have for many years been many positive efforts to combat racism. And with the "summer fairytale" of 2006, a new era had supposedly begun. The successes of the German national squad were transfigured as an event in which a new, multicultural country could fly its brightly coloured flag without misgivings.

In the Berlin district of Kreuzberg, the owner of a German-Arab snack bar and football fan even defended his German national flag against anti-fascist activists who wanted to tear it down. And no doubt there will also be some Syrian refugees in the crowds waving German flags this summer. But we would be well advised to refrain from wallowing in the heart-warming stories about this being an indication of successful integration, as long as deputies in the Bundestag continue, on a weekly basis, to tighten asylum laws and cut back services, and while every day, people continue to suffer and perish miserably along the fortified outer borders of Europe.

For its part, the German Football Association should take a much more offensive stand on the issue of racism. It is not enough to present the "team" as a soft-focus microcosm of multiculturalism. Ozil, Khedira and Podolski can certainly serve as models; but this obligation also falls upon Thomas Muller and Manuel Neuer.

The identity of football players should not be determined by others on the basis of migration backgrounds, countries of origin, religion or for that matter sexual orientation – homosexuality is the last absolute taboo in football. For the German national squad itself there are in any case only two clear criteria for acceptance: a German passport – and talent on the field.

Critics of France's draft law to combat "radical Islamism" say the proposed measures are inefficient and will further stigmatise Muslims. They assert that involving Muslims in the ... END_OF_DOCUMENT_TOKEN_TO_BE_REPLACED

Sanctions against Ankara are being considered at the EU summit. The number of those in favour has risen. It remains unclear how Germany will behave. But would such measures have ... END_OF_DOCUMENT_TOKEN_TO_BE_REPLACED

Prominent Islamic scholar Muhammed Abu Zaid has urged Muslims in France to cooperate with the government. At the same time, he emphasised the need for the French authorities to ... END_OF_DOCUMENT_TOKEN_TO_BE_REPLACED

Last week Egypt's police stepped up an "unprecedented escalation" on activists by arresting a leading rights group director. Advocates on the Nile have long weathered a crackdown ... END_OF_DOCUMENT_TOKEN_TO_BE_REPLACED

In France and in Canada's Francophone province of Quebec issues of personal freedom have recently been thrown into sharp relief. In Quebec, legal proceedings have been initiated ... END_OF_DOCUMENT_TOKEN_TO_BE_REPLACED
Author:
René Wildangel
Date:
Mail:
Send via mail

END_OF_DOCUMENT_TOKEN_TO_BE_REPLACED
Social media
and networks
Subscribe to our
newsletter