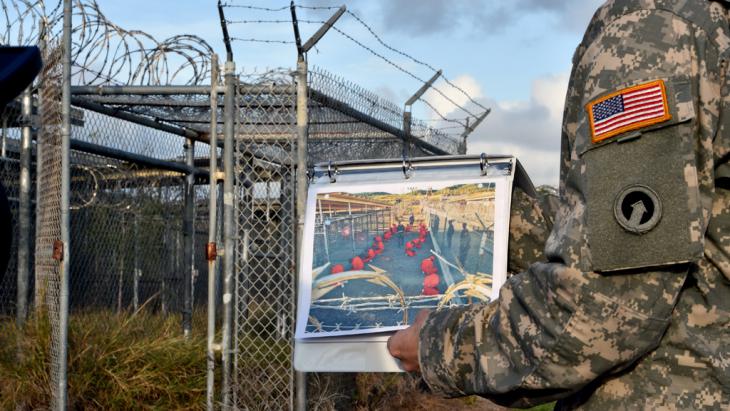 The West and the Islamic world

European nations suspend civil rights in an era of terror, but preach to others about the rule of law. What might they do to regain credibility in the Middle East? By Sonja Hegasy

How do people in the Middle East regard Germany, beyond the familiar conspiracy theories? A year ago, Angela Merkel became a well-known figure there for a humane fundamental decision: war refugees need protection, the German constitution makes it possible for the persecuted to apply for asylum – with no upper limit on numbers.

Overnight, Merkel became a heroine for the victims of the Middle East, despite the fact that over the previous 12 months, they had been following some quite different stories from Germany with some astonishment: the Volkswagen emissions scandal, the mismanagement of Germany's biggest airport construction site and the FIFA corruption affair had led many to start doubting their image of Germany.

Criminality, dilettantism and corruption in the boardrooms of iconic German businesses? How could the representatives of German culture devote so much criminal energy to deceiving customers and viewers? Egyptian commentators wondered why anyone should take any lessons from such a nation.

Double standards and a lack of credibility

Barack Obama will leave the White House and Guantanamo Bay will still be operating. For the Islamic-dominated world, this is a classic example of the hubris and the reality of the West. Repealing the constitutional state in Cuba of all places – a nation that the US never tires of criticising for its human rights policies – is peculiarly ironic. The ruling dynasties of the Clinton and Bush families in the US and populist victories in Britain and Hungary are also being eyed with suspicion.

Following a series of attacks, France is now extending its state of emergency for the fourth time. Military personnel patrol public squares and metro entrances. In Turkey, a military coup was thwarted, but the FAZ reported on a "counter-coup by Erdogan". This is also regarded as a double standard by most Turks. 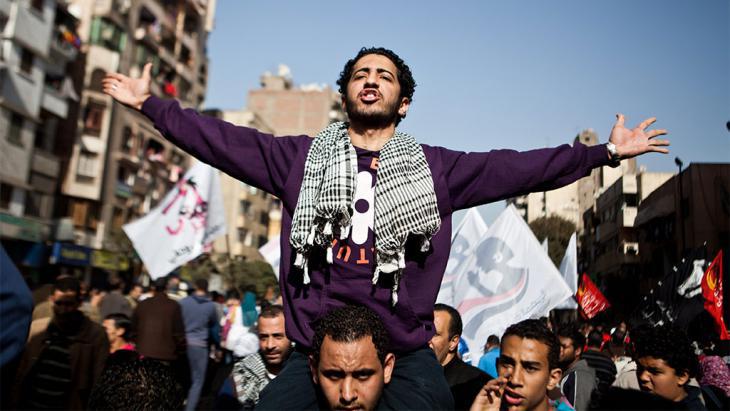 Deep mistrust: ″in October 2011, still on a wave of euphoria over the political upheaval in the Arab world, a poll in six Arab nations ascertained that 19 percent of those polled believed that the protest movements had been incited from outside, to spread chaos in the region. This is a view now shared by a surprising number of people in Egypt, Syria, Iraq, Yemen and clearly also in Turkey,″ writes Hegasy

I like to read the blog by the Egyptian national Sarah Eltantawi, to understand what average Egyptians think about the intervention of the West: "My aunt does not feel like a victim. She would rather be ruled by Egyptians than foreigners, even if the foreigners are more efficient. She is loyal, she is proud, she does not think of herself as “poor” relative to western countries, she feels in many ways rich. To tell her she is underprivileged, someone who doesn’t understand and who needs someone who doesn’t even live in Egypt to explain things to her, is to her unimaginable and absurd," Eltantawi writes.

Europe and the US cannot continue to take the moral high ground in the debate on democracy and the rule of law. On the one hand, they are too much a part of the problem and on the other they contradict their own policies too frequently.

If there is to be sensible social understanding, Europe and the US need to publicly acknowledge their credibility problem. This is a dimension of terrorism prevention that should not be neglected: Barack Obama could well be right when he assumes the disregard for international law at Guantanamo has radicalised more young people for Islamist terrorist groups than the 779 inmates that were held there in total.

Democracy is a compromise mechanism

Secondly, in our socio-political discourse with the rest of the world, we need to communicate what problems and dangers we in Europe face in the continual realisation of democracy and the constitutional state. Thirdly, we need to stop formulating our demands for the Middle East to democratise in terms of an abstract pure form: democracy is a compromise mechanism – even German voters don't always get what they associate with the act of casting a vote. Otherwise, when confronted with the political reality in Europe, disappointments will be bitter and the political appreciation deficits great.

A model with normative ambitions that can barely be fulfilled – a pale imitation of what it purports to be – is a caricature of itself and will always be perceived as such. No discussion about anti-Semitism occurs in the Arab world without reference to the long history of the European persecution of the Jews and the Holocaust. Barely a discussion takes place among Muslims about the lack of a constitutional state in their home nations without prompt reference to the extraordinary rendition of alleged enemy combatants to Cuba.

It must be made clearer to the outside world that European societies are also facing all the problems of post-democracy and globalisation. Just as in Egypt and Turkey, Germany is experiencing xenophobia in response to a no longer fathomable, strange, unreal world, in which individuals easily believe in conspiracy theories or immediately turn away from the cynicism of politics. 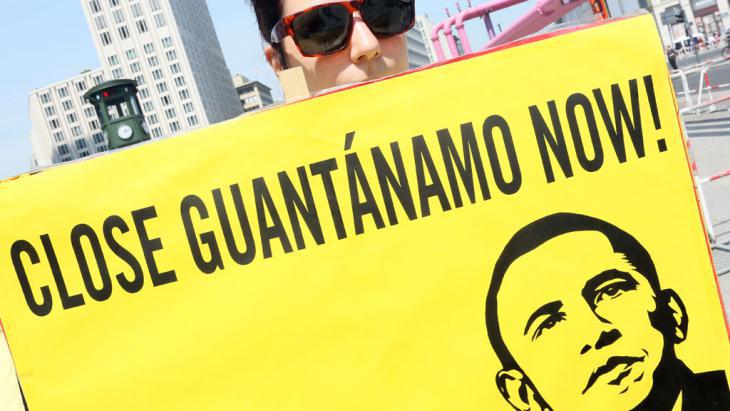 Political boomerang: Barack Obama could well be right when he assumes the disregard for international law at Guantanamo has radicalised more young people for Islamist terrorist groups than the 779 inmates that were held there in total

In October 2011, still on a wave of euphoria over the political upheaval in the Arab world, a poll led by Shibley Telhami in six Arab nations ascertained that 19 percent of those polled believed that the protest movements had been incited from outside, to spread chaos in the region.

This is a view now shared by a surprising number of people in Egypt, Syria, Iraq, Yemen and clearly also in Turkey, where fingers are pointing at the Americans following the coup attempt. Views such as these quite obviously feed off the policy of creating "constructive chaos" in the Middle East, something Condoleezza Rice always defended with a moral imperative.

Arabs, Turks and Iranians follow the disastrous situation in Iraq. Little wonder then that there has been a sharp rise in the number of people who believe that the protest movements of 2011 were pushed from outside, with the failure of the promise of democracy and the new civil wars in Syria and Yemen.

Egyptians and Turks feel most misunderstood

Europe and the US are not the problem of the Middle East, or vice versa. It may sound paradoxical, but if we want to regain credibility, we must more clearly communicate the loss of legitimacy of democratic institutions here, as well as our own political alienation. The Egyptians and the Turks, who feel most misunderstood at present, may then also be ready to engage with the outside perspective.

There can be no freedom without individual moral fibre. This fibre is being stripped away both here, as well as there. The current debates over standards for political action in the 21st century and the understanding of basic values in an era of right-wing populism show how great the need for orientation is. It is not only AfD voters who experience unrestrained and unwieldy globalisation as a threat to their original life plan.

Following the speculation bubble, the consequences of immoral finance offerings, terrorist attacks and forced migration, American historian colleagues are being reminded of the human suffering and turbulence before the First World War.

Fears and inconsistencies need to flow much more clearly into foreign cultural and education policies, thus promoting realistic assumptions about Germany. Only by recognising that the shared story in the Mediterranean region also needs common answers, will we be able to do something to counter the impression that a new order for the Middle East is being imposed from outside, without regard for losses.

Islam scholar Sonja Hegasy is Vice-Director of the Zentrum Moderner Orient in Berlin.

Home
Print
Newsletter
More on this topic
The West and the Islamic world: The despotic temptationThe Muslim world and the West: Europe is not under threatTony Blair and the Iraq war: A case of smoke and mirrors
Related Topics
Barack Obama, Democracy and civil society, Human rights, Islam and the West, Right-wing populism, U.S. policy in the Middle East
All Topics

Political analyst Taqadum al-Khatib argues that Egypt can, in co-ordination with its European partners, develop a common vision to solve the complex conflict in Libya. For this to ... END_OF_DOCUMENT_TOKEN_TO_BE_REPLACED

The upheavals of the past year in the MENA region are arguably as momentous as those of the Arab Spring in 2011. Yet perhaps the biggest difference is that our interest seems to ... END_OF_DOCUMENT_TOKEN_TO_BE_REPLACED

In 2019, the long-running Penguin Classics series released its first novel translated from Arabic: Tawfiq al-Hakim’s "Return of the Spirit", conveyed into English by William ... END_OF_DOCUMENT_TOKEN_TO_BE_REPLACED

Equality in divorce, a ban on polygamy: reformers of Islamic family law have a clear agenda. They are exploiting the ambiguity of traditional jurisprudence. By Joseph Croitoru END_OF_DOCUMENT_TOKEN_TO_BE_REPLACED