The burgeoning fundamentalist religious forces have not only radicalized the conflict between Israel and Palestine. A new generation of Palestinian women is also increasingly looking to the Islamists for salvation. Kai Adler reports 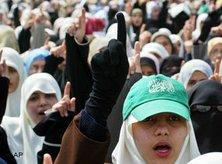 Female Hamas activists protesting on the campus of the Islamic University in Gaza. The headscarf for many has become a symbol of the Palestinian cause

​​Just a few minutes' drive along the dusty road leading from "Al-Najah" University in Nablus is the student residence hall "Al-Nur" – "The Light." The multistory building is operated by the Islamic student block of the Hamas and Islamic Jihad groups and is reserved exclusively for devout women.

Practicing Islam together and observing its rules are integral components of their daily lives. This also can be said of Alaa, a 21-year-old studying English language and literature who says that she only really found religion during her studies and her stay at the student residence.

Popularity of the veil

"I've become a different person," she reveals. Like all the other residents, she, too, is veiled from head to toe – and is proud of it. "For years, I fought for the right to wear my hijab," says Alaa. Her mother at first didn't let her do so because "she considered it a sign of oppression."

She shares this experience with many other young women: it's not among the older women, but among the younger generation that the veil has gained popularity in recent years. Far more than just a religious symbol, the veil has come to signalize a woman's identity, and her commitment to the "Palestinian Cause."

This is a change that already began to take shape in the mid-1990s. While Fatah was negotiating with Israel for land and peace in Oslo, the activities of Hamas picked up considerably, not only in Gaza, but in the West Bank as well.

The failure of the peace talks confirmed the doubts of many Palestinians: they no longer looked to Fatah, but instead to Hamas to end the decades-long occupation. After all, many here have benefited directly in past years from the help of the Muslim Brotherhood and feel little debt to the corrupt Arafat ranks.

Charitable activities undertaken by the Islamists

The well-functioning social system developed by the Muslim Brotherhood is the major motive the young students in the residence hall cite for their loyalty to Hamas. Exactly what their commitment to Hamas involves, they would rather not say. "Social work" is the popular buzzword – reference is made to schools, kindergartens and Hamas' own student union.

"We women do not participate directly in attacks; we don't throw bombs," explains Alaa. "Our job is to practice Islam and to support our fighters as Islam teaches us, both morally and politically."

The women of "Al-Nur" are in contact with the Hamas student residence for men, but there are no direct exchanges between the two groups. Communication is conducted only through middlemen – and even then, no glances are exchanged. Anything else would be regarded as unchaste and un-Islamic.

Nevertheless, despite the strict segregation of the sexes, and although as a rule the female students do not participate actively in fighting, they do not feel disadvantaged in any way in comparison with the men. Hamas itself emphasizes in its founding declaration of 1988 the significance of women for jihad.

In fact, the role of women is no longer restricted to raising children and providing moral support – a few female Hamas followers are actually involved today directly in the struggle.

It's true that the Muslim Brotherhood initially banned women from fighting. But ever since a few female suicide bombers came to the fore in the course of the "Al Aqsa Intifada," the image of women has begun to evolve, even among the religious organizations. However, the first Hamas member among these new "Shaheedas" (martyrs), the student Dareen Abu Aysheh from Nablus, committed her suicide attack in the name of Al Aqsa rather than Hamas.

In February 2002, the young woman had presented herself to Hamas and requested permission to carry out a suicide attack. When the Muslim Brothers forbade her from doing so, the Hamas disciple went over to the Al Aqsa brigades. They furnished the young woman with the necessary equipment and that very same month she blew up a checkpoint between Ramallah and Jerusalem.

Currently, the attitude of Hamas to female "Shaheedas" is unclear. In any event, since Dareen's attack, even the religious groups have started allowing women to participate in suicide bombings. Only one year after Dareen, a 19-year-old student named Hiba Daraghmeh blew herself up in the name of Islamic Jihad, and in January 2004 Reem al-Riyashi, a mother of two from Gaza, conducted an attack on the Erez checkpoint, on behalf of Hamas.

Women like these have become role models for the female fighters who recently founded a women's unit of the Izz al-Din Al-Qassam brigades. In September 2005, they appeared, veiled and wielding rockets, in the Hamas weekly paper "Al-Risala" and professed themselves ready to take part in active battle.

They spoke of their love for jihad and how they longed for martyrdom – a desire they viewed as fully compatible with their traditional role as mothers and caretakers of their families.

This may seem like a contradiction, but it's just one of many. The fact that educated, working women are willing to accept the restrictions entailed by a society run according to Sharia law – the type of society Hamas envisions – seems astonishing.

If Hamas had its way, women would in future only be allowed to enter the public realm with permission from a male guardian – and this despite the fact that as recently as 1996 Palestinian women's rights advocates successfully petitioned the Palestinian Authority for the right to their own passport and thus the ability to move freely.

In practical terms, however, even regimentation along the lines envisioned by the religious fundamentalists would change nothing: like many of the promises and accomplishments of the past years, women's right to freedom of movement has never actually been realized. Today, it is the Israeli army that robs women of their freedom. Alaa, the young student, points out the window: "Out there is the Israeli military. It's dangerous here. Islam and its regulations protect us."

She and her classmates hope to find in Hamas the kind of structure and stability that Fatah has failed to provide them. The ideas of the latter seem to many today to have miscarried, now that the Palestinians' efforts increasingly focus on liberating themselves from the occupation.

A future Palestinian state run according to the laws of Sharia would suit the female students just fine. To them it's not despite the fact but because such a state would be based on rules made not by man but by God that it would be superior to the Western democracies. The topic of women's rights has receded into the background.

Gaza Disengagement
Javier Solana: EU Prepared to Step up Engagement
The EU is ready to make the Gaza disengagement work, says Javier Solana, EU High Representative for the Common Foreign & Security Policy – with the hope and commitment that soon after, the road to a two-state settlement can be resumed

Middle East
Hamas vs. Fatah
For the first time the Islamist Hamas movement is running for Parliament. Opinion polls suggest a neck-and-neck race and a possible sharing of power between the ruling Fatah movement and the highly controversial Hamas. Igal Avidan has more from Ramallah

END_OF_DOCUMENT_TOKEN_TO_BE_REPLACED
Social media
and networks
Subscribe to our
newsletter