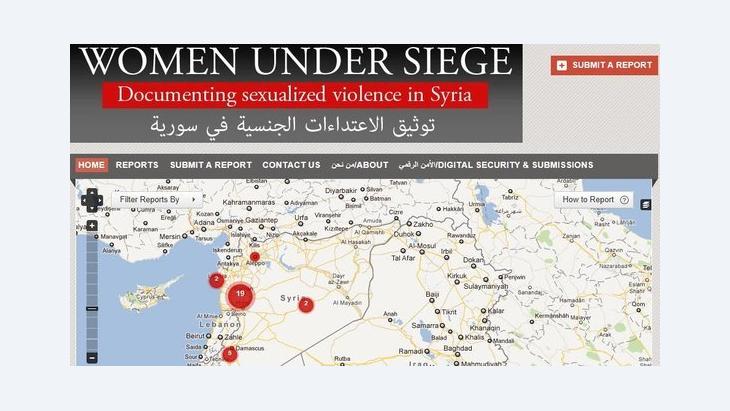 The ''Women under Siege'' Website
Mapping Sexual Violence in Syria

"Women under Siege" is the name of a website gathering data on sexual violence in Syria. The use of open source software enables users to input their data directly. Many people are prepared to risk their own safety for the sake of being heard by the outside world. Johannes Thumfart has the details

Brooklyn. South Slope. Lauren Wolfe sits on the sofa in her apartment. A huge dark brown Labrador lolls beside her. A chicken is roasting in the oven. The window looks out on the harbour. It's cosy. You might not believe it, but Wolfe is at war.

Part of her appears to be somewhere else, as she sits in her living room talking about her website, which is essentially nothing more than a few lines of HTML code linked up with a country she has never set foot in. She is the initiator of "Women under Siege", a website that collects reports on rape in Syria.

"We're in a tricky situation as far as safety goes," she says nervously, typing alternately on her tablet and smartphone. "The mere existence of this page encourages people to tweet or write to us, but it's possible that we're putting people in danger as a result."

If she realises that someone has just sent her an e-mail from an Internet café, then she advises the sender to leave as quickly as possible, she explains. Situations like this fill her with fear and make her nervous. Sometimes, people in Syria are less concerned with their own survival than with getting information to the outside world, she says.

42 women in one single attack

Rebel reports say Shabiha militias loyal to the Damascus regime raped 42 women in one single attack in Homs in January. Last year, a man from the same city was raped by between 40 and 50 members of the country's official armed forces after being forced to witness the rape of his wife and daughters. 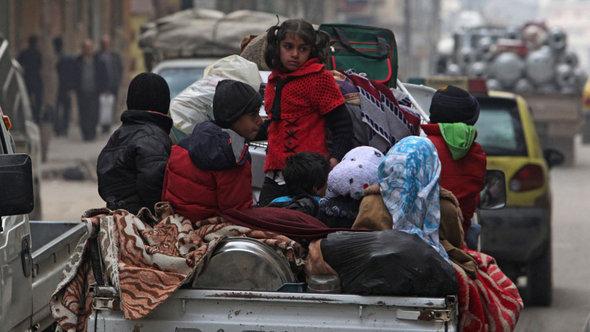 In armed conflicts such as the one in Syria, women and children are often the first victims of wartime violence. The "Women under Siege" website, which was initiated by Lauren Wolfe in New York, seeks to document incidences of sexual violence in Syria and map them

While the Iranian news agency, Fars, and Syria's state broadcaster are not accusing secular and Islamist rebels of mass rape, they are reporting isolated incidents. Just as in every conflict zone, sexual violence is being used as a weapon by both sides in Syria. Detailed information is sparse. It is difficult to differentiate between rumour, propaganda and truth.

The web-based journalism project "Women under Siege" does not select reports on rape in Syria, but collects them in a database with a map. It is the first time that rape in war has been documented in this way. The incidents on "Women under Siege" can be filtered according to categories such as the gender of the victim, the number of perpetrators or whether the rape resulted in pregnancy. For example, selecting the gender of the victim shows that in some 20 per cent of rape cases, the victims are men.

"Women under Siege" serves to document war crimes, as well as information on what is happening on the ground. Like other similar projects using mapping software, people who see or hear anything incriminating can report it themselves via Twitter or e-mail. This makes the horror visible, quantifiable and locatable. The technology gives people at least some control over the situation.

No guarantee of security

"Women under Siege" has ceased communicating with people in Syria via text message for security reasons. The page recommends the encryption programmes "HushMail" and "Tor", but indicates that there can be no 100 per cent security guarantee. Nations such as China and Iran have at their disposal Deep Packet Inspection, which enables authorities to search content sent via the Internet. They can also block "Tor". The Syrian government also has the means to acquire such technology, which is mostly sold by western companies.

But this virtual proximity also produces other problems in addition to that of Internet security. Once, says Wolfe, a Syrian woman asked her for tips on how to protect herself against rape. The woman clearly thought Wolfe must have been something of an expert on the subjects of war and rape. But while New York-born activist certainly knows her way around the Internet, she has never been to a war zone.

What should she say to the woman in Syria? In the end, Wolfe sought advice from an NGO and passed its guidelines on to the woman. These guidelines were not tips on how she might protect herself, but how to cope with the consequences of rape, such as unwanted pregnancy, sexually transmitted diseases and trauma. Today, Wolfe thinks this was a "sad, inappropriate answer to a tragic situation."

War, unfiltered and in real time, has been made possible by the Internet. In future, there will be more online warriors and more online activists – people like Wolfe who do what they can via the web. This has already been something of a mass phenomenon with the actions initiated in Egypt by the "Anonymous" hacker collective. For "Women under Siege", Wolfe uses Ushahidi software, which was developed in Kenya. 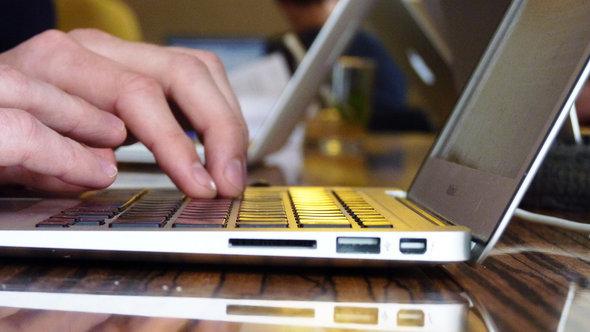 "War, unfiltered and in real time": according to Johannes Thumfart, the number of online warriors and activists will increase in the future as it offers people the chance to do what they can via Internet

When political violence erupted following elections in Kenya in 2007, lawyer Ory Okolloh began reporting on incidences of violence on the streets in her blog "Kenyan Pundit". The blog helped many people to protect themselves and give the violence a wide berth. Print media were too slow and unreliable. The blog inspired programmers to develop the open source software "Ushahidi", which is Swahili for "testimony". It generates maps that can be modified by anyone via SMS, MMS or e-mail. To date, Ushahidi has been utilised in Congo, Libya, Gaza and India.

Because they turn swarm intelligence into concrete survival benefits, philosopher and bioethicist Allen Buchanan considers Ushahidi maps to be "cognitive enhancement". Like performance-enhancing medication or implants, Ushahidi systems are aimed at impacting directly on the physical perception of the individual. The maps form a human-machine complex, becoming part of the neuronal systems of people living in affected areas.

But does the same apply to us, mere observers of the violence? Immanuel Kant, who famously rarely left his native city of Königsberg, wrote that the idea of a system of global civil rights would only take hold if "the violation of civil rights in one part of the world is felt by everyone." This would appear to be the case more than ever today. That being said, detailed information was not able to prevent Rwanda or Bosnia.

Back in Brooklyn, Lauren Wolfe looks exhausted. When asked if this is the case, she explains that she is trying to maintain a distance from her work. She asks: "How often can you read about mice being put into a young girl's vagina and remain emotionally present all the while?"

In the end, it's not possible to switch off, she says, adding that she is on edge. She is increasingly experiencing sudden fits of rage about things that didn't matter to her before. The violence, the powerlessness, the passivity of the international community ... it gnaws away at her incessantly.

As Pride Month draws to a close, Richard Marcus delves into Saqi Books’ latest publication, "This Arab is Queer". Edited by Elias Jahshan, this anthology of essays is remarkable ... END_OF_DOCUMENT_TOKEN_TO_BE_REPLACED

A new exhibition, "Syria – Against Forgetting", at Cologne’s Rautenstrauch-Joest-Museum focuses on Syria's artistic and cultural heritage and pays tribute to the country before ... END_OF_DOCUMENT_TOKEN_TO_BE_REPLACED

With regard to gender justice, things look bleak in the Arab world. Laws typically discriminate against women, while national legislation all too often does not comply with the ... END_OF_DOCUMENT_TOKEN_TO_BE_REPLACED

This year’s Morgenland Festival opened with the premiere of Kinan Azmeh’s musical theatre piece, “Songs for Days to Come”, based on fifteen poems by contemporary Syrian poets. ... END_OF_DOCUMENT_TOKEN_TO_BE_REPLACED

Women in the Levant have long used needlework to depict the region’s history, its landscapes, customs and traditions. Intricately embroidered panels, varying in style, colour and ... END_OF_DOCUMENT_TOKEN_TO_BE_REPLACED

END_OF_DOCUMENT_TOKEN_TO_BE_REPLACED
Social media
and networks
Subscribe to our
newsletter