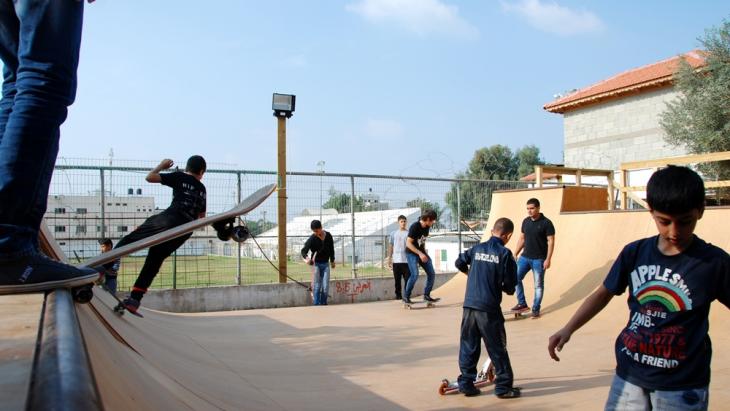 The X-Games skaters in Palestine

If at first you don't succeed

The city of Qalqilya in the north-west of the West Bank is walled in on three sides by the Israeli separation barrier. A group of young local skaters called the "X-Games" is fighting for more space, freedom of movement and a way to break out of the stuffy, conservative atmosphere. Laura Overmeyer reports from Qalqilya

"This is my dream." Sajed Abu Ulbeh is standing on the edge of the new skate ramp, looking down at the children and young people playing boisterously below, with a bright sparkle in his eye. "Everyone is crazy!" he laughs.

Sajed is 30 and a passionate skater. When he was 12, his father brought him a pair of inline-skates from Israel, sparking the boy's enthusiasm. From then on, he was a common sight on the narrow streets of Qalqilya. The neighbours shook their heads as he skated by at speed – a crazy kid with wheels on his feet really stood out against the sedately conservative backdrop of the Palestinian city.

After a while, though, other children and young people joined Sajed, equipped with anything on wheels. The result was a skater scene – based less on professionalism than on enthusiasm – that dubbed itself the "X-Games", inspired by the famous extreme sports events in the USA.

But streets are dangerous places to play, and the police soon herded the young skaters onto side streets. But the road surfaces there had been destroyed by Israeli tanks during the second Intifada, making them useless for skating. The young people dreamed of a place of their own, secretly fantasising about the big skate parks and ramps they knew were on the other side of the Israeli wall.

The quest for vacant space is omnipresent in the West Bank. But it's hard to imagine a more claustrophobic place than Qalqilya, because the 40,000-inhabitant city in the north-west of the West Bank is directly enclosed on three sides by the Israeli separation barrier; an eight-metre grey concrete blockade initiated by the Sharon government in 2002 as part of its anti-terrorism programme. 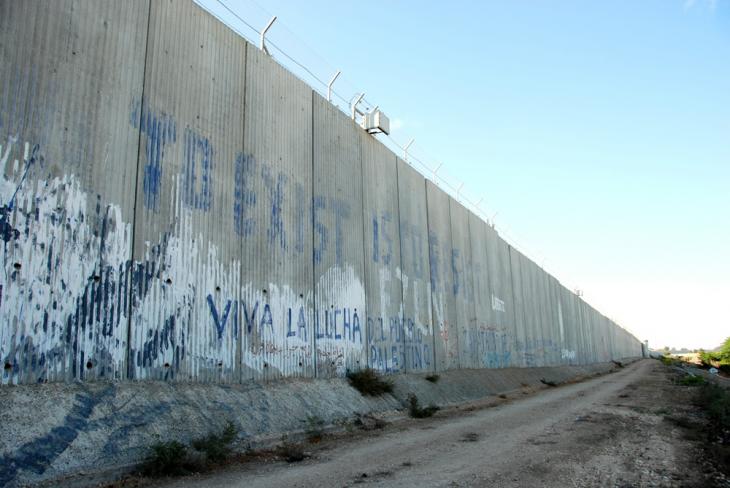 Surrounded and isolated: the West Bank city of Qalqilya is enclosed on three sides by an eight-metre-high concrete wall (pictured here) with watch towers

No less than 80% of this separation barrier deviates from the "green line" agreed in 1949, almost exclusively in Israel's favour. Qalqilya was cut off almost entirely from the surrounding countryside. The true extent of the wall can only be seen from the city's rooftops, from where the nearly closed circle is visible. In good weather, the sea glints in the distance: so near and yet so far.

A quest for fun

Sajed opened a small indoor skate park in 2010 using his own savings. However, he was forced to close it again a short time later due to a lack of funding, sending the X-Games back out onto the streets of Qalqilya.

Not that a thing like that could discourage them; in fact, they began to add to their skills, learning hip-hop, beat-boxing and parkour of their own accord. It was an expression of defiance against both the Israeli occupation and the strict conservative rules of their own society. At the same time, it was their way of trying to have fun in their walled-in city.

Finally, the turning point came in 2011, in the form of two men. The New York artist Adam Abel had come to Qalqilya to research an art project on physically restricted space. Looking for someone who knew his way around the city, he came across the well-known political and human rights activist Mohammed Othman. Abel – always on the lookout for an exciting story – had heard talk of Sajed and the X-Games and decided to meet the charismatic young man. Othman, previously unaware of the subculture's existence, went with him.

The meeting with Sajed was like love at first sight. "Mohammed and I come from completely different worlds, but we both realised instantly: something special's happening here, something absolutely unique," Abel recalls. "From one moment to the next, I dropped everything and decided to turn the story into a movie."

The film "Qalqilya – Where Palestinians are learning how to fly" tells the story of Sajed and the X-Games. It accompanies them on their quest for recognition and a space of their own, depicting their dream of a skate park in Qalqilya.

"We never promised the boys anything; neither that we'd bring out the film, nor that we'd build them a skate park," says Othman.

Even when he and Abel got the Dubai-based art and cultural organisation Tashkeel on board as a financer at the end of 2012 and signed up a Californian designer for a skate ramp early in 2013, Abel and Othman continued to be vague about what would happen.

"We told them, 'Listen, we can't promise you anything. We'll do our best to make it all happen. But please give us time,'" says Abel. "Precise planning is practically impossible. And in the end, every project can be upturned or put on ice by Israel for some reason, no matter how certain it looks. Working with the Qalqilya administration also proved to be difficult, because they didn't have the faintest idea of what we were envisaging." 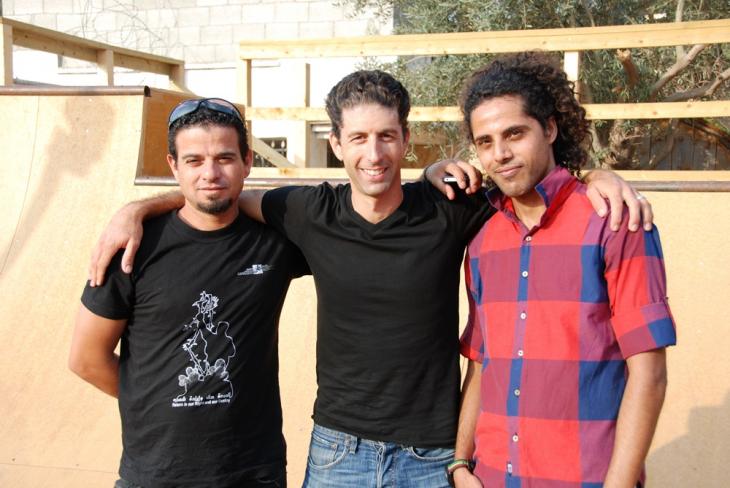 "This is my dream": Sajed Abu Ulbeh (right) of the "X-Games" team is delighted with the new skater ramp in Qalqilya, which offers new space and new perspectives for the young skaters in the city

There was nine months of intense planning, one week of construction work, setbacks, sweat and tears. Nevertheless, Sajed and his friends' dream has come true with the opening of the new skate ramp inside the Qalqilya zoo – incidentally, the only zoo in the West Bank. Abel and Othman's film project has also been completed.

"Of course we won't leave them on their own; on the contrary, our ties are stronger than ever. But we want them to learn to take responsibility themselves. We've sown the seed, now they have to water it and care for it," says Othman.

Abel adds, "This ramp and these kids are unique. They speak a language that the people of Qalqilya don't understand and it's important that their language is listened to and spread. This ramp wasn't built for a closed group, but for a growing, open community. The development is up to them now."

The ramp in Qalqilya is not the first one in the Palestinian territories: Ramallah and Gaza City also got their own skate parks this year. But Qalqilya's ramp is by far the largest. It's also equipped with an individual design of four different difficulty levels – which the designer had to adjust on site because the kids kept yelling "Higher, higher!" They don't seem to know the meaning of fear.

Thirteen-year-old Abdullah rolls fearlessly up the ramp on his board. A black eye reveals that he's already come into close contact with the ground, but Abdullah shrugs it off. "I used to play on the streets. Sometimes I'd fall off 50 times in a row, and that hurt much more. But then I just got up and went on practicing."

Hamas in Gaza, the Palestinian Authority in the West Bank, and Israel: Palestinians have fewer and fewer rights, says Khaled Elgindy. The Middle East could escalate at any time. ... END_OF_DOCUMENT_TOKEN_TO_BE_REPLACED

Joe Biden promised to make democracy and human rights central to US foreign policy. But that means not insisting on Israel's right to defend itself without mentioning its ... END_OF_DOCUMENT_TOKEN_TO_BE_REPLACED

As the Biden administration attempts to promote democracy and human rights in the Middle East, it will confront the deep-seated belief among Arabs that U.S. policies are unfair to ... END_OF_DOCUMENT_TOKEN_TO_BE_REPLACED

Ben Aylon’s debut international album sees him elevate the traditional music and instruments of Senegal and Mali into a fresh contemporary setting. Seven years in the making, " ... END_OF_DOCUMENT_TOKEN_TO_BE_REPLACED

Years ago, the International Holocaust Remembrance Alliance formulated how hatred of Jews can be recognised. Now a new definition is causing controversy. By Sarah Judith Hofmann END_OF_DOCUMENT_TOKEN_TO_BE_REPLACED

When it comes to talent, Palestine may well be able to compete with other football teams in the region, but growth and development are hampered by the situation in the Palestinian ... END_OF_DOCUMENT_TOKEN_TO_BE_REPLACED
Author:
Laura Overmeyer
Date:
Mail:
Send via mail

END_OF_DOCUMENT_TOKEN_TO_BE_REPLACED
Social media
and networks
Subscribe to our
newsletter