The third "Congress of World Religions" took place the first two days of July 2009 in Kazakhstan. By appealing for more tolerance and cooperation between the religions, the host country wants to raise its profile as international peacemaker. By Edda Schlager

​​ "I come from the Middle East and therefore I prefer to sit in a pyramid – a better symbol than the Tower of Babel, which stands for people's inability to understand each other."

With these words Israeli president Shimon Peres voiced his approval of the venue in the Kazakhstan capital of Astana where the "Congress of World Religions" was held on 1 and 2 July.

Over 500 members of all major religions from 35 different countries responded to the invitation, among them representatives of various Christian confessions such as Catholics, Russian-Orthodox and Protestants, along with Muslims, Jews, Hindus, Buddhists, Taoists and Zoroastrians.

They all convened at the "Palace of Peace and Reconciliation," a futuristic pyramid designed by star architect Sir Norman Foster for the capital city's new centre.

Incursion of politics into religion

Apparently, not all of the participants understood the call for interreligious dialogue in the same way as the organisers. As Shimon Peres held his opening address, the Iranian delegation demonstratively walked out. 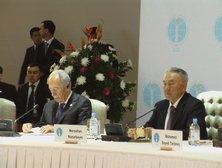 ​​ "We've come to hear religious leaders," remarked Mehdi Mostafavi, president of the Islamic Culture and Relations Organisation in Iran. "Peres is not a religious leader, but a man of violence."

The Iranian delegation didn't find out until the day before the conference that Shimon Peres would not only attend, but had also been chosen as keynote speaker, and they reacted by threatening not to come. They did however return to the conference hall once Peres had finished his speech.

Despite this confrontation, those attending the conference were unanimous in their assessment that only mutual tolerance, understanding for the positions of the others and an active exchange on the existential problems of humanity could lead to lasting peace.

The dream of a new world order

Kazakhstan hosted the "Congress of World Religions" for the third time, after prior events in 2003 and 2006. With this initiative the country not only wants to enhance its status as international peacemaker amongst the religions – Kazakhstan's President Nursultan Nazarbayev also took advantage of the platform to pitch himself as initiator of a restructuring of the global order.

In his keynote speech, Nazarbayev linked the appeal for mutual understanding he addressed to the religious representatives in attendance with an analysis of the financial crisis: "The current crisis offers a unique opportunity to realise the dream of a new world order," he pointed out. To pass up such a chance would be inexcusable. 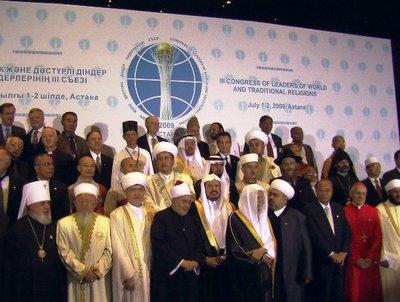 At the last Congress of World Religions in Astana, the attendees already discussed opportunities and ways to promote the dialogue between religious communities on a global scale

​​ Now was the time to change the world not through a military conflict, as in the past, but instead through peaceful acceptance of disparate positions.

Israel's President Shimon Peres, on his first state visit to Kazakhstan, called on Saudi Arabian King Abdullah to meet with him in Jerusalem or Riyadh to move forward with the Middle East peace process.

Thanks to its interreligious engagement, Kazakhstan would also be suitable as meeting place, noted Peres. The Saudi Arabian king had recently suggested an Israeli-Arab peace initiative in which Israel and all 75 Arab states should participate.

"All religions turn to the same God"

Sheik Mohammed Said Tantawi, imam of Al Azkhar University in Cairo, called for tolerance and friendship between the faiths. "All religions turn to the same God," said Tantawi. With this in mind, every single person could "be at peace not only with himself, but also show acknowledgement, tolerance, love and friendship to others." 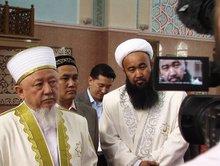 ​​ Cardinal Jean-Luis Tauran, president of the Papal Council for Interreligious Dialogue and leader of the Catholic delegation in Astana, reminded the attendees in his greeting address that peace must be based on justice.

"I don't like the word 'tolerance'," Tauran commented. "It's frequently misused. A brother does not want to be tolerated, but to be loved." According to Tauran, Pope Benedict XVI was also following the congress with a great deal of goodwill.

The Ashkenazi Chief Rabbi of Israel, Yona Metzger, sees the main job of religious leaders as consisting in "strengthening trust, justice and moral values." Metzger admonished the participants not to "misuse religious places to spread terrorism or as weapons depots".

Phra Dharmakosajarn, member of the Buddhist delegation and rector of Mahachulalongkornrajavidyalaya University in Bangkok, said he was impressed that Kazakh President Nazarbayev had succeeded in bringing together Shimon Peres and numerous Middle Eastern representatives of Islam. 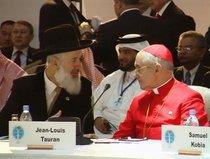 ​​"I don't expect any immediate measures to come out of this congress; results can only be expected in the long term," remarked Dharmakosajarn. "But it is a step in the right direction."

The Archbishop of Kazakhstan, Tomash Peta, admitted, "The congress is naturally a big show, but why not, if there are honourable intentions behind it?"

He himself takes a critical view of the peaceful coexistence of over 40 religions and confessions as propagated by the Kazakh leadership. "Faith cannot be enforced by the municipal government, the 'Akimat'," said Peta. It has to come from the people themselves.

Just how credible Kazakhstan's commitment to interreligious dialogue really is remains to be seen in the coming months, because the Kazakh parliament has plans to tighten the country's law on religion. In February of this year a proposed amendment was only stopped by the Kazakh constitutional council, which deemed it unconstitutional.

The revisions to the current law would prescribe, for example, that children have to have permission from both parents to take part in religious events, and that those who introduce, publish and disseminate religious literature would face high penalties.

With these new laws, Kazakhstan wanted to target primarily religious groups such as Baptists, Jehova's Witnesses or Hare Krishna, which the Supreme Mufti of Kazakhstan, Absattar Derbisali, refers to as "sects".

A plea for interreligious dialogue

The United Nations Commission on Freedom of Religion had already censured the draft legislation sharply even before the constitutional council announced its decision, pointing out that the country that will be taking on the chairmanship of the OSCE from 2010 should be particularly committed to the human rights policies and democratic principles of the OSCE member states.

In their closing note the participants in the conference spoke out on behalf of "shared moral values" as the only way to avoid interreligious and interconfessional conflicts. They voiced the hope that interreligious dialogue could help to circumvent stereotypes, prejudices and religious disputes.

The organisers of the "Congress of World Religions" – wisely – neglected to mention the ongoing debate on the tightening of Kazakhstan's religious laws.

Islamic Revival in Kazakhstan
A Pragmatic Islam
Islam is enjoying increasing popularity in Kazakhstan. For many people this represents a return to Kazakh traditions, even if the impetus for the return to their roots has come from abroad. The Kazakh government continues however to promote religious freedom and diversity, and to protect itself against fundamentalist extremism. Edda Schlager reports

Conference of the World Religions in Madrid
Appeal against Terrorism and Violence
On the weekend a three-day dialogue with an appeal against terrorism and violence. The conference was organized by the "Muslim World League" on behalf of the Saudi king Abdullah. Peter Philipp reports

Interview with Prince Hassan of Jordan
"Why Do We Blame Everything on Religion?"
Prince Hassan of Jordan has been awarded the Abraham Geiger Prize for 2008 in recognition of his advocacy of ecological sustainability, reconciliation and dialogue between the religions. Nasser Jubara and Bassam Rizq spoke with him

Benjamin Idriz, imam of the mosque in Penzberg near Munich, is one of the most prominent representatives of Islam in Germany. He sees his role as building bridges to mainstream ... END_OF_DOCUMENT_TOKEN_TO_BE_REPLACED

People these days are seeking orientation in a rapidly changing world. In response, all religions – each unique in their customs and traditions – need to pull together, says Chief ... END_OF_DOCUMENT_TOKEN_TO_BE_REPLACED

Religions are often a source of conflict. But the worldwide Religions for Peace movement seeks to change that by galvanising interreligious dialogue. Delegates from 90 countries ... END_OF_DOCUMENT_TOKEN_TO_BE_REPLACED

No other Western poet was arguably so well-versed in the Koran or so fascinated by Islam as Germany's national hero, Goethe. In a new publication that examines all Goethe's ... END_OF_DOCUMENT_TOKEN_TO_BE_REPLACED

The façade of a twelfth-century cathedral is an unlikely place to find a message in Arabic script carved in stone, but so it is in the Portuguese city of Coimbra. Marta Vidal ... END_OF_DOCUMENT_TOKEN_TO_BE_REPLACED

Twenty years after 9/11, the world is faced with the dual challenge of Islamophobia and anti-Westernism. Ahmet Kuru argues that Muslims in the West, well versed in both Western ... END_OF_DOCUMENT_TOKEN_TO_BE_REPLACED
Date:
Mail:
Send via mail

END_OF_DOCUMENT_TOKEN_TO_BE_REPLACED
Social media
and networks
Subscribe to our
newsletter