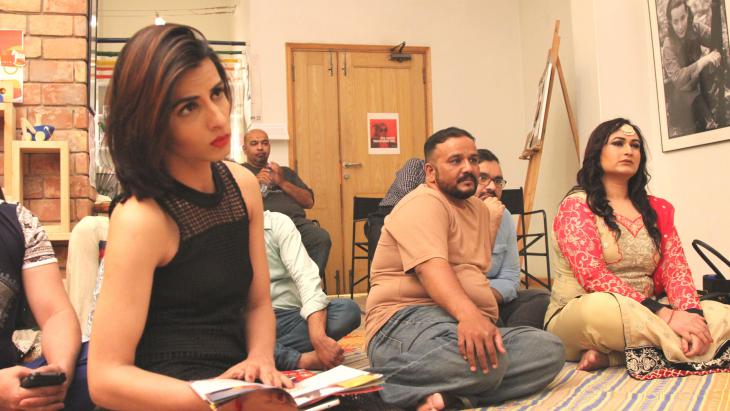 In times of increasing radicalisation, minorities and those who occupy society's niches and in-between realms can become prime targets, as the attack last weekend on a gay nightclub in Florida so painfully demonstrated. Recently, however, on the other side of the globe in South Asia, there have also been some astounding breakthroughs. By Sara-Duana Meyer

Some say it was the Hindu god Rama who more than 2000 years ago gave the hijra the ability to confer blessings on others as a reward for their loyalty. Chosen by divine hand, and described in ancient texts as eunuchs or hermaphrodites, the hijra occupy a mythological and socio-biological grey area for which the collective term "transgender" doesn't really suffice.

Even today, members of the so-called third gender are still invited to weddings and births in South Asia to bestow their blessing on the young couple or new-born son. They can often be seen at road intersections offering good wishes in exchange for money or the threat of a curse, garishly made up and wearing brightly coloured women's clothing.

Whether chosen ones or not, hijra, who often come from the lower social classes and live in a kind of clan under the supervision of an older trans woman, usually have only limited opportunities to earn a living. They can dance, or if they lack the talent for it, work as prostitutes or beg. The Arabic root "hijr" is used here in the sense of leaving home, being excluded from society, whether forced or not, almost as a self-fulfilling prophecy. 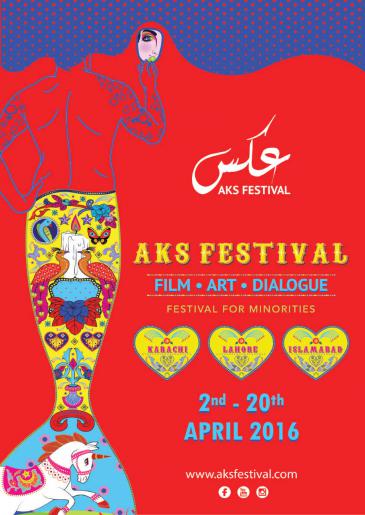 Pakistan - AKS Film Art and Dialogue Festival for Minorities: in April 2016 the Forum for Dignity Initiative and the AKS Festival hosted its third annual festival for and about sexual minorities, in particular trans women. Film screenings took place in safe and private settings in Islamabad, Lahore and Karachi. Members from all sexual minorities were invited to attend the screenings, discussions, workshops and art exhibitions

As blurred as the boundaries between the genders may seem upon closer inspection, the effort to clearly demarcate them using the template of stereotypical characteristics and assumptions only provides dubious social protection.

Assigning people to a third gender category, known as khwaja sera in Urdu, is much easier than recognising sexual orientations such as homosexuality – the divine hand is by contrast only rarely called into question.

Since 2012, a third option besides female and male has been provided for in Pakistani passports. Bangladesh, Nepal and India also offer a legislative alternative to the binary gender system – making four South Asian countries from a global total of eleven nations that allow for such provision.

For the first time, the legislation has led to job quotas in public institutions and corresponding university place allocations, a decision emphatically welcomed by activists.

"But it's still not enough," says Kami, an activist and co-organiser of the Danish-Pakistani LGBT festival AKS, which took place for the second time in Pakistan in April 2016. "We are equal citizens: we don't want special rights, we want equal rights."

While the generic term refers primarily to those who don't identify with their birth gender, the prefix "trans" always connotes at the same time a transgression of socially defined binary identity and thus a life outside the norm. And whenever concepts and identities blur the boundaries of clear-cut categories, people can feel uneasy.

The murder of Alesha, a trans activist who was shot at the end of May in Northern Pakistan, deeply shocked the community. Ultimately, it was the excruciatingly long debate on whether she should be treated in the women's or men's section of the hospital that cost Alesha her life.

A film festival as transgender platform

'We want to have a platform where the general population and the trans community can meet," says Kami, brushing her shoulder-length hair off her face, "not just a quota. That's why events like AKS are so important for us."

The Film, Art & Dialogue Festival was launched in 2014 by filmmaker Saadat Munir in Copenhagen, Denmark. It is meant to be a socio-political festival but without sacrificing artistic entertainment value.

The focus is on "thirdness", says Saadat, the visibility of sexual and cultural minorities, and on building a bridge between them and the rest of the population. "I don't like Western terms like LGBT that try to force something into a category. Sexual ambiguity is nothing unusual to Pakistanis, because it has always existed there." 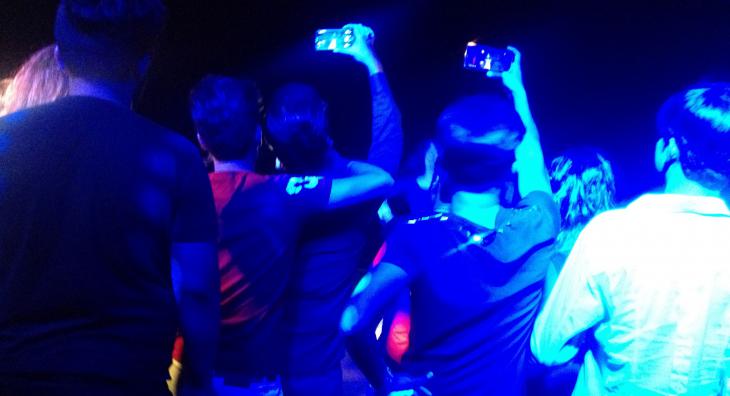 Transgender: "while the generic term refers primarily to those who don't identify with their birth gender, the prefix "trans" always connotes at the same time a transgression of socially defined binary identity and thus a life outside the norm. And whenever concepts and identities blur the boundaries of clear-cut categories, people can feel uneasy," writes Duana-Meyer

At first, holding the festival in Pakistan seemed unthinkable. "Don't worry," said co-organiser and trans activist Neeli Rana. "The trans community will make it possible for you." With the support of initiatives and cultural organisations, the festival then took place in several cities in Pakistan, with a diverse audience.

The result was greeted euphorically by its partners such as Marvi Mazhar: "I think this was the first public event where transgender people came together with a wide audience just to have a good time. Before, we only had transgender events here where policy and rights were debated head-on, but none that were fun."

The architect has been director of the cultural centre T2F in Karachi ever since its founder, Sabeen Mahmud, was shot and killed over a year ago. T2F is known for giving room to controversial topics and to minorities. Hence, visits by government officials to some of its recent events were hardly surprising. They were there for protection, they said. Shortly before, the publisher of a LGBT magazine in Bangladesh had been murdered.

Transphobia grows out of sexism

"There's no need to fool ourselves: the general population does not accept anyone who is different," says Sid, LGBT activist and Kami's life partner for the last seven years. "Homosexuality is considered a disease which can be treated with electric shocks. For gays and lesbians, it's much easier to hide themselves in society; transgender people are extremely marginalised due to their visibility. On the other hand, a lot is happening these days in Pakistan on the subject of transgender, which also helps the LGBT community as a whole."

However, some activists take a critical view of the legal option of declaring a third gender. The myth that transgender people are always hermaphrodites sometimes serves as protection, but in a hyper-masculine society like Pakistan, where being "male" is equated with progress, the adoption of the third sex also means giving up male privileges, including when it comes to inheritance law. 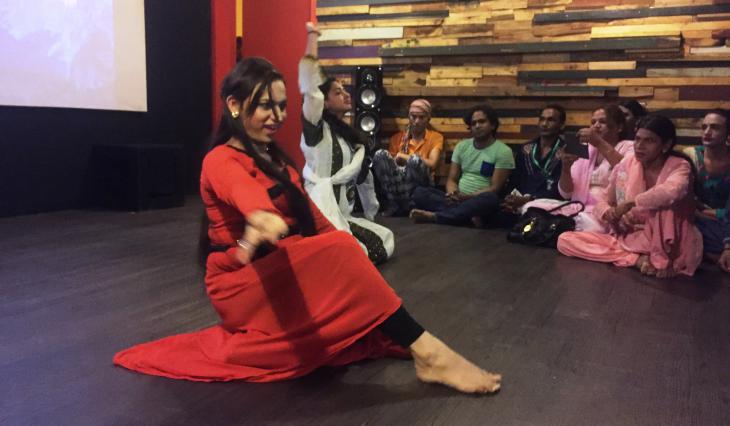 Marvi Mazhar, director of the T2F cultural centre in Karachi: "I think this was the first public event where transgender people came together with a wide audience just to have a good time. Before, we only had transgender events here where policy and rights were debated head-on, but none that were fun"

This is another reason why the switch from female to male is rarely discussed in the transgender discourse. A daughter whom Allah has summoned to be a son is a gain for the family. Transphobia grows out of sexism – that a man would voluntarily give up his male superiority in favour of a female identity and biology is difficult to understand for many and harbours subversive potential that provokes fear and rejection.

The increasing radicalisation in Northern Pakistan has thus led to attacks on sexual minorities. Alesha is not an isolated case, and virtually every trans woman in Pakistan has experienced more or less violent assaults.

"AKS is a trailblazing platform," says Sid. "We want to continue the festival in the form of small events, for which we are currently seeking financial means and a venue," Kami continues. "The LGBT community, which is itself so diverse, needs places where ideas can be exchanged and people can learn about their rights. And then we want to carry the dialogue out to a wider audience that can act as a catalyst for the remaining population. This dialogue will still take a long time and everyone has to be on board. But we can already see that things are changing."

Home
Print
Newsletter
More on this topic
Interview with LGBT rights activist Arsham Parsi: ''Rights are never given; we have to fight for them''Book review: "What makes a man? Sex talk in Beirut and Berlin": An honest and painful cultural exchange Brian Whitaker – "Unspeakable Love": Gay and lesbian life in the Middle EastGay rights in Malaysia: Creating change in the mosque
Related Topics
Gender, Homosexuality, Minorities in the Muslim world, Transgender
All Topics

Many marriages to British Asian men are accompanied by false promises of improved finances. Later when the men abandon their wives to return to the UK, some brides' families find ... END_OF_DOCUMENT_TOKEN_TO_BE_REPLACED

Global heating is driving domestic migration in Bangladesh, which sits just above sea level. With a population of 160 million, it is the most densely populated nation in the world ... END_OF_DOCUMENT_TOKEN_TO_BE_REPLACED

As Qatar prepares to host the 2022 FIFA World Cup, the country has come under fire for its treatment of migrant workers, with some nations calling for a boycott of the contest. ... END_OF_DOCUMENT_TOKEN_TO_BE_REPLACED

Urban transport concepts in the global South, often promoted by organisations such as the World Bank, aim to encourage motorised private transport – at the expense of non- ... END_OF_DOCUMENT_TOKEN_TO_BE_REPLACED

Tents, mud and cold: refugees contend with miserable conditions in Bosnia & Herzegovina. With the European Union demanding that Bosnia accommodate the asylum-seekers, its ... END_OF_DOCUMENT_TOKEN_TO_BE_REPLACED

Authorities in Bangladesh started sending a first group of more than 1,500 Rohingya refugees to the isolated island of Bhasan Char, despite calls by human rights groups for a halt ... END_OF_DOCUMENT_TOKEN_TO_BE_REPLACED

Comments for this article: The dynamic third gender

I am writing a piece for Le Monde about homosexuality and islam and I would be very greateful if you could contact me. Thank you very much. All the best, Geraldine (dgeschwarz@yahoo.com)

END_OF_DOCUMENT_TOKEN_TO_BE_REPLACED
Social media
and networks
Subscribe to our
newsletter