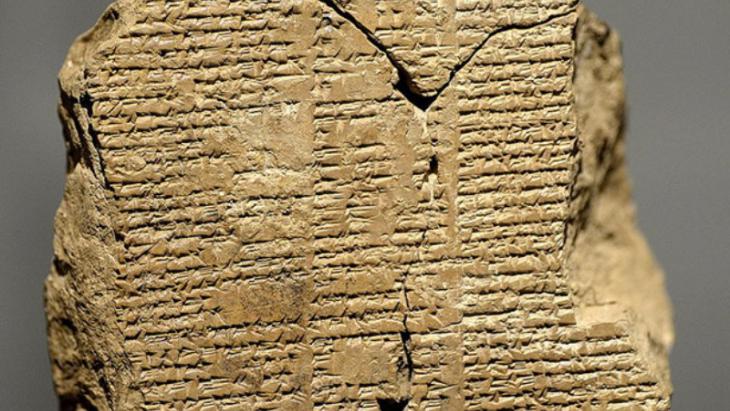 Some time around 3200 BC, humans living in the ancient Middle East developed the first written language. George Smith presented fragments of the Flood narrative from the ancient Middle Eastern story of Gilgamesh at a conference in London in 1872 – and mankind’s first epic was rediscovered. By Melanie Christina Mohr

In 1916, Rainer Maria Rilke wrote in a letter to Helene von Nostitz: "I have immersed myself in the precise, scholarly translation, and in these truly gigantic fragments I have experienced measures and forms that belong with the greatest works the conjuring Word has given us in any age.”

The ancient Middle Eastern Gilgamesh Epic, which Rilke read in Arthur Ungnad’s version, is the first epic of human history. Today, it consists of just over two hundred cuneiform tablets and fragments, which comprise the "standard" version. It reaches out to us down the centuries from the sites in ancient Mesopotamia where it was composed and read.

Even though we don’t know the identity of most of the cuneiform texts’ authors, we know from the Babylonian tradition that Sin-leqe-unnini probably collected the older and middle-period Babylonian tablets and fragments in around 1200 BC, in the ancient city of Uruk, "conjuring" the text we have today.

People have been translating and making detailed philological studies of the texts since the 19th century. Over the years, new fragments of cuneiform have been found on archaeological digs, or given to researchers by anonymous collectors, filling in gaps in the story or clarifying uncertainties.

Just as the hero Gilgamesh, his companion Enkidu and Humbaba, the guardian of the cedar forest, have made it into the present day, we can still marvel at ancient sites like the ruined city of Persepolis in southern Iran, or the massif of Bisotun in the province of Kermanshah, in the west of the country. It was the latter site that made it possible to decipher the miraculous cuneiform script. 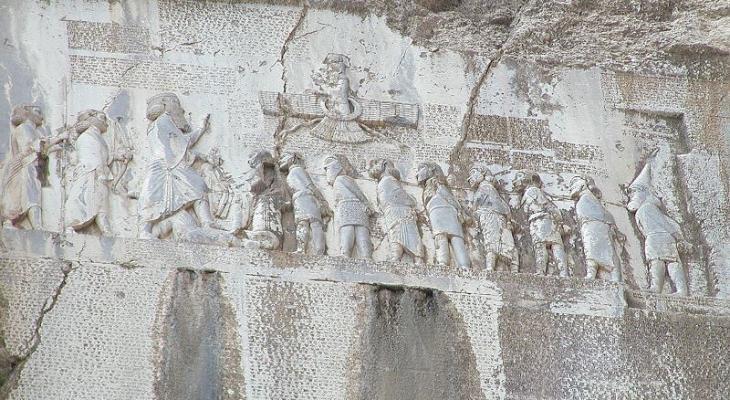 The "trilingual inscription of Bisotun": high up on a mountain rock face, Darius the Great, ruler of the Archaemenids, had the portraits of kings carved in front of bound prisoners. Farahavar, the symbol of ancient Persian Zoroastrianism, floats above the depiction

A journey to spheres both ancient and new

Johannes Friedrich (1954) sees the decoding of ancient languages and writing during the 19th and 20th centuries as "one of the human mind’s most outstanding achievements". He puts the lack of interest in these ground-breaking academic feats down to the fact that the character of these old texts is hard to understand, and it is not always easy to recognise their use and value.

When it comes to the origins of written language, we know with certainty that its visual character developed deep in the ancient Middle East – in Mesopotamia – as a result of agriculture and trade in around 3200 BC. The inscription on the cliffs of Bisotun written in Elamite, Old Persian and Babylonian scripts, enabled people to decipher cuneiform, marking the beginning of a journey into spheres both ancient and new.

In the inscription Darius the Great, (522-486 BC), the third king of the Archaemenid Empire, claims authorship, invokes the legacy of Cyrus the Great and celebrates his triumph over Gaumata, the Zoroastrian high priest.

The "trilingual inscription of Bisotun" was noted by the earliest explorers of the Middle East in the 17th century. By the time Georg Friedrich Grotefend (1775 – 1853) was able to take the first ground-breaking step towards deciphering the cuneiform scripts, Carsten Niebuhr (1733 -1815) had already managed to name forty-two different signs in the Old Persian version of the text. Oluf Gerhard Tychsen (1734 – 1815) had also identified the significance of the diagonal mark as a device to separate words and Friedrich Munter (1761 -1830) had correctly established that the script was written (and should therefore be read) from left to right.

Grotefend’s extraordinary achievement lay in deciphering the names of the Persian kings Xerxes, Darius and Hystaspes. Sir Henry Rawlinson also made a name for himself with the text: he began copying the "trilingual inscription of Bisotun" in 1835 and left behind detailed descriptions of the sometimes perilous undertaking for those who came after him. 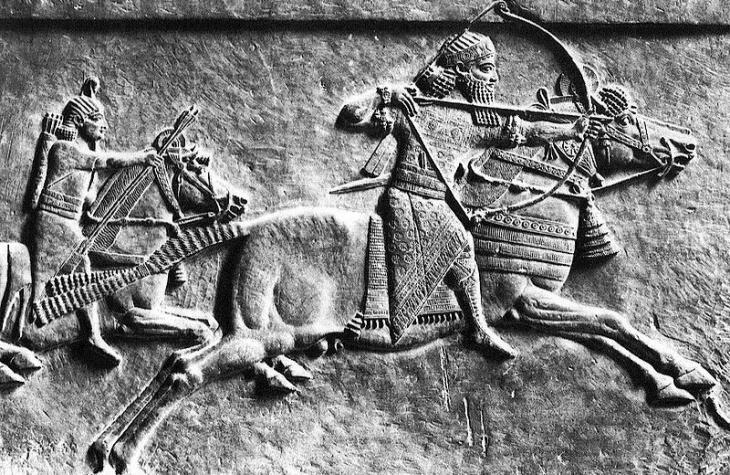 The last Assyrian ruler, King Assurbanipal, was considered extremely educated. During his reign the library in Nineveh, the most important library of the Ancient Orient, was built. Around 28,000 tablets and fragments were found there alone

The isolated language of Sumerian – in which the first literary texts of our civilisation were set down – was a precursor to Akkadian, which developed over epochs, until it eventually gave way to Aramaic. The final literary texts in cuneiform stem from the last two centuries BC.

The cuneiform corpus is sprawlingly rich and has a striking number of dialects and different literary traditions.

The texts include legal documents, letters, omens, epics, prayers and songs, wordings for oaths and magic spells, talismans and of course the products of academic literature, for example grammatical and lexigraphic collections, geographical lists, and notes on mathematics, astronomy and astrology.

What we know today about the heartland of the ancient Middle East, between the Euphrates and Tigris rivers and beyond, comes from stone tablets and inscriptions made on columns, palaces or cliffs, as in the case of Bisotun. Around 28,000 tablets and fragments were found in the library of the Assyrian king Assurbanipals in Nineveh alone.

The Ebla Archives in northern Syria were uncovered in 1964, affording an insight into how literature was organised – using a system which doesn’t seem too distant from our own. Some ancient texts contain "blurbs", giving an overview of the text’s contents. The type of text can sometimes also be discerned from the shape and size of the tablet it is written on; administrative texts and rations lists, for example, were relatively long and comprised up to 60 columns, sometimes 3000 lines per tablet.

Ancient Middle-Eastern literature cries out to be read; alongside the hero Gilgamesh, who is searching for immortality, the Atrahasis Epic tells the story of the Flood and the destruction of mankind by the gods, and the ancient Middle-Eastern creation myth Enuma elis tells of how the world was made.

Home
Print
Newsletter
More on this topic
Between Tigris and Euphrates: Mesopotamia: the cradle of civilisation Islamic archaeology: Samarra, centre of the worldIraq's National Museum re-opens: Only photos on view of the Nimrud treasures
Related Topics
Archaeology, History of the Near and Middle East, Languages, Middle Eastern studies, Travels in the Orient, Zoroastrianism
All Topics

The death of Mahsa Amini at the hands of Iran's "guardians of morality" is only the latest, tragic example – in a neverending chain of state repression and excessive police ... END_OF_DOCUMENT_TOKEN_TO_BE_REPLACED

In "Iran. Die Freiheit ist weiblich", journalist Golineh Atai describes the dogged resistance of courageous Iranian women against the Islamic Republic and the mullahs who have ... END_OF_DOCUMENT_TOKEN_TO_BE_REPLACED

Iranian artist Parastou Forouhar has lived in Germany since 1991. Full of rage, just like the protesters, she hasn't yet given up on the idea of justice. By Julia Hitz END_OF_DOCUMENT_TOKEN_TO_BE_REPLACED

Fariduddin Attar’s "The Conference of the Birds", one of the seminal works of Islamic mysticism, has recently been published in sumptuously illustrated German translation. It ... END_OF_DOCUMENT_TOKEN_TO_BE_REPLACED

The violent death of 22-year-old Mahsa Amini has achieved something the entire opposition has failed to do during the 43-year rule of the ayatollahs in Iran: almost the entire ... END_OF_DOCUMENT_TOKEN_TO_BE_REPLACED

Like Christianity, Europe's history is one of migration. Both have strong roots in the Orient and in cultures thousands of years old. Cultural historian Bernhard Braun invites us ... END_OF_DOCUMENT_TOKEN_TO_BE_REPLACED
Author:
Melanie Christina Mohr
Date:
Mail:
Send via mail

END_OF_DOCUMENT_TOKEN_TO_BE_REPLACED
Social media
and networks
Subscribe to our
newsletter