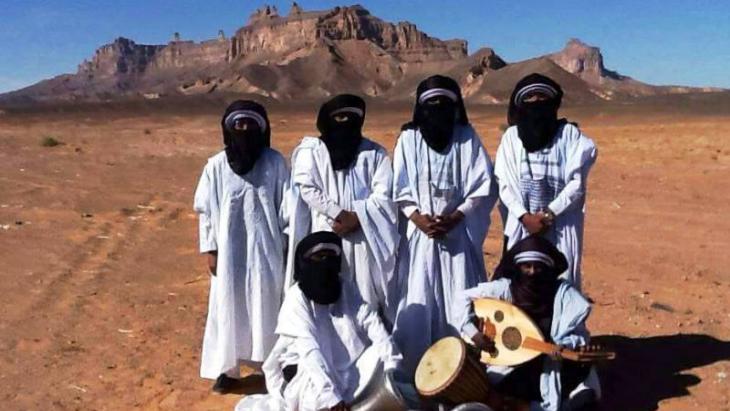 "Passionate about the Tuareg" see themselves as cultural ambassadors. The musical project is the result of co-operation between two bands – one from southern Tunisia and the other from the Libyan Sahara. What unites them is a desire to revive the musical heritage of their forefathers through modern re-interpretation. By Valerie Stocker

The young men stand confidently on stage. With their tagelmusts – the traditional veil worn by the Tuareg – pulled back, they smile before an applauding public. A certain melancholy colours their singing, matched by the yearning sounds of the electric oud, played by Ibrahim, the lead singer. Blues guitars, drums and percussion provide for a fast beat. A brightly pitched flute known as the gasba provides accompaniment, occasionally breaking into a solo.

"We want both to preserve the spirit of Tuareg music and infuse it with some new pep," explains Mohamed, a singer in the group. "That′s why we blend modern Western and traditional African instruments, such as the djembe drum." Mohamed is a member of Emran Tenere, a Tuareg band from the Ghat oasis in southern Libya. Guitarist Haythem and his band Israa Fusion have given a new lease of life to the folk music of the southern Tunisian Bedouin – a style he describes as Oriental jazz.

He says that the aim of the joint project is to honour the musical heritage of the various nomadic peoples of the region. "At the same time, we aim to include other cultures and musical genres, making the music younger and more international in the process."

The musicians certainly achieved their goal at this concert, which was part of an event focusing on Libya held at the French cultural centre in Tunis in mid-March. The reaction of the audience was overwhelmingly positive. Even concert-goers from Libya, some of whom were directly confronted with their country's Tuareg culture for the first time, were impressed.

"I had no idea that that we had such a band and that they were so good," remarked one young man from Tripoli, the Libyan capital. While men and women danced, a particularly enthusiastic group of spectators waved a Berber flag, which serves both the Imazighen (plural of Amazigh) and Tuareg peoples as a cross-border symbol of their identity.

The group of musicians, made up of four Libyans and four Tunisians, expresses the multiple identities of northern Africa. The four Libyans are Tuareg from the Fezzan, the south-western region of Libya that borders Algeria, Niger and Tunisia. Haythem and his band are from Gafsa, where the mountains of central Tunisia merge with the desert oases of the south. The folk music inspired by this landscape is that of the local Bedouin tribes, whose ancestors once came from the Arabian Gulf and met here with the Berber people. 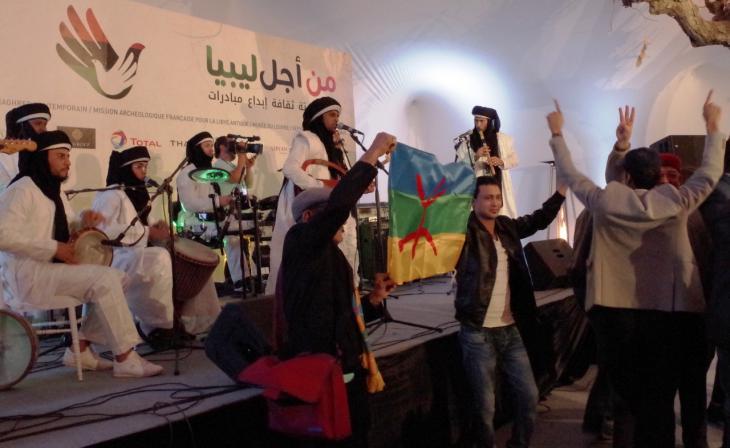 Music serves a cultural political purpose: held at the French cultural centre in Tunis in mid-March as part of an event focusing on Libya, the concert given by Emran Tenere and Israa Fusion delighted fans. Even audience members from Libya, some of whom were directly confronted with their country's Tuareg culture for the first time, were impressed. While men and women danced, one enthusiastic group of spectators waved a Berber flag, which serves both the Imazighen (plural of Amazigh) and Tuareg peoples as a cross-border symbol of their identity

The musicians assert their cultural identity as being Berber, yet reject any ethnic categories. "We are concerned with culture, not with racial issues between Berber and Arabs." The revolutions in Tunisia and Libya have raised these issues to the political level. Local traditions, however, often transcend such categorisations.

The members of the group mainly sing together in Tamahaq, the Tuareg dialect spoken in the Fezzan. "It wasn't easy to sing together and write lyrics at first, because we weren't familiar with many of their words," explains Haythem.

The Tamahaq and Tamasheq dialects spoken by the Tuareg are closely related to the Berber dialects of the Maghreb. In contrast to Arabic, however, there is no widespread uniform written language. "But the language of music quickly connected us," adds the guitarist. During the interview, all members of the band speak Arabic.

The four Libyans have long had contacts in neighbouring Tunisia. Since 2010, they have taken part in various events in the country. In 2015, they met Haythem at a festival in the Tunisian oasis of Tamaghza. At the time, the versatile young musician was playing Tunisian Rai music. "He liked Tuareg music and so we decided to create something together," recalls Mohamed. But other obligations kept getting in the way and the two bands only managed to join up in January 2017 in Gafsa.

Logistical problems arose primarily in Libya. In order to travel to Tunisia, Mohamed and his band usually take the land route – spanning some 1,400 km straight through territories still ravaged by civil war – as flight connections are often interrupted. Especially risky is the desolate road leading to the north, which is currently fought over by rival armies and occasionally subject to attack by militias of the Islamic State.

The south of Libya was already underdeveloped under Gaddafi and, since his overthrow, it has become a no man's land in which various tribes control their own territories according to their own rules. Despite its oil fields, the region has not experienced any economic development. Smuggling, including that of migrants, has therefore become the most important source of income. "In the lyrics of our songs, we address the difficult living conditions in our native region," explains Mohamed. "But we also sing about the desert, love, and peace."

Mohamed is an official at the ministry of education. Music is a hobby for him and his friends, but one in which they have all heavily invested. The promotion of culture was never a great priority for the Libyan government and with the start of the civil war in 2014 most funding came to an end. "The state has other problems," says Mohamed. Nonetheless, in comparison to the period before the revolution, there is now much greater freedom. "If we had played Berber music with Tunisians under Gaddafi, we would all have been thrown in jail."

The deposed leader referred to Libya as an Arab country. The propagation of Berber culture was often regarded as subversive and harshly punished. Today, Libya's Amazigh and Tuareg people are regarded as minorities. Yet, the society as a whole is the product of mass migration, invasions, and assimilation.

"The whole of northern Africa was once Amazigh," says Haythem's cousin, who accompanies Israa Fusion. "But we coastal Berbers lost our culture over many centuries as a result of Arabisation and colonisation. The Tuareg were less affected because of their life in the desert and could maintain their traditional lifestyle."

For the same reason, Tuareg music also survived in southern Libya, where traditional folk songs were sung at public festivals. Yet, hardly any of the dozens of local music groups played outside of their regional communities, and there is no music industry in the Fezzan.

Ironically, Libya indirectly contributed to the spread of what is now known worldwide as desert blues. In the 1980s, Gaddafi invited thousands of young Tuareg from the Sahel region to Libya for military training with the promise of supporting their liberation struggles in the surrounding countries. Among others, members of the band Tinariwen met in the training camps, and their music became the soundtrack of Tuareg revolts in Mali and Niger.

"I despise politics, but in our societies you always end up returning to the topic of politics," sighs Haythem. Instead, he and Mohamed are much more concerned about bringing people together beyond cultural and state borders. Relations between their two countries provide a perfect example.

"If you read media reports or Facebook comments, you get the impression that Tunisians and Libyans hate each other," claims Mohamed. "We would like to change that." Both neighbouring countries are economically and culturally intertwined. The political circumstances, as well as the misconduct of individuals, have led to a great deal of animosity in recent years.

"As a collective, it is important for us that we visit and get to know each other's homeland and lifestyle," stresses Haythem. That′s why the group plans to perform together this year in Libya and to film music videos in both countries. The Tunisian mountain landscapes and the Acacus mountains in the Libyan Sahara will serve to illustrate their musical explorations, as well as the names of their bands. Israa translates as "nocturnal wanderings" and Emran Tenere means "those passionate about the desert."

The term "Tuareg" refers to tribes and nomads who speak dialects of Tuareg and live in Targa, an area in south-west Libya recently renamed Wadi Al-Hayat but previously known as ... END_OF_DOCUMENT_TOKEN_TO_BE_REPLACED

The Islamic Republic has been unable to quell the civil unrest that erupted three months ago, after Mahsa Amini died after being detained for violating hijab rules. Now the ... END_OF_DOCUMENT_TOKEN_TO_BE_REPLACED

Cries of "Benghazi!" still resonate across the USA ten years after a deadly terrorist attack in Libya killed the U.S. ambassador and three other Americans. Ethan Chorin re-tells ... END_OF_DOCUMENT_TOKEN_TO_BE_REPLACED

After a two-year hiatus, the Arab League re-convened at the beginning of November in Algiers against a backdrop of uncertainty and discord. By Pierre Boussel END_OF_DOCUMENT_TOKEN_TO_BE_REPLACED

In the run-up to the COP27 global climate summit, hosted by Egypt in November, it is worth noting that little rainfall, aggressive heatwaves and worsening drought make the Middle ... END_OF_DOCUMENT_TOKEN_TO_BE_REPLACED

The southern shores of the Mediterranean Sea are losing sand faster than almost anywhere else. The ecological and economic damage is immense. The good news is, there are ways to ... END_OF_DOCUMENT_TOKEN_TO_BE_REPLACED
Author:
Valerie Stocker
Date:
Mail:
Send via mail

END_OF_DOCUMENT_TOKEN_TO_BE_REPLACED
Social media
and networks
Subscribe to our
newsletter